In last week’s premiere installment of Women in Sweats, Janna put it out in the universe that if there is going to be any “brief nudity” on Men in Kilts, then may it be at the hands – or the lack of pants – of some hot Scottish Rugby players. Well, this week’s episode definitely earned that rating, but it wasn’t due to any rugby locker room shots.

In “Scottish Sports,” we’re back on the Scottish road with Sam and Graham as they explore the country’s sports and games that test both physical and mental agility, as well as the durability of form fitting moisture-wicking jerseys. From rock lifting to rugby, the Men in Kilts gave us a history lesson in all the ways the Scots aren’t messing around when comes to competitive games. Essentially, the Scots believe you go big or go to your ancestral home and face eternal shame because those weak-ass strings you call arms couldn’t throw a log.

There was pain, sweat, and tears, and that was just from Janna and I trying to hold back our puns about Sam and Graham handling their balls. Equipment balls, you sinful Sassenachs.

Our Thoughts on Men in Kilts Episode 102: Scottish Sports

Julie: Okay, Janna. We have to get this out and give you the time and space to grieve. There were no naked Scottish rugby players in this episode. Are you okay?

Janna: I’m handling it well. I’m just relieved it wasn’t an old man like you suggested. It was just the usual-naked Sam.

Julie: We did get a naked Sam. More on that later. This week was all about sports, and I know this will not be a shock to anyone who knows me: I’m not athletic. Not even somewhat. My brother? Complete opposite: soccer and little league as a kid, football and baseball in high school, and even college football. Me? I played one game of soccer when I was five, got a ball right to the thigh and walked off the field, crying.

Janna: I played basketball a little in elementary school and had a very brief rodeo career, but no trophies or awards to show for my mediocre efforts. And now I’m just too tired to be athletic. 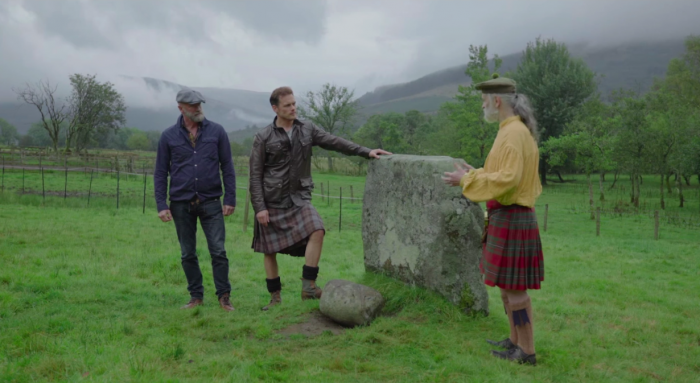 Julie: It finally happened! We got a Man in Kilt. Better yet, we got a Sam in Kilt! It’s like the wardrobe department remembered the title of the show. Also, nice nod to Outlander fans with Sam wearing the Fraser plaid.

Janna: Good eye! I didn’t notice. It was comforting to learn that there actually IS something under the kilt at Highland games. Got to keep those family friendly. And the Queen is there sometimes too. She don’t need to be accidentally seeing that Scottish sausage.

Get Your Rocks Off

Julie: Of all the men to teach us about Scottish rock lifting, this was not who I had in mind. 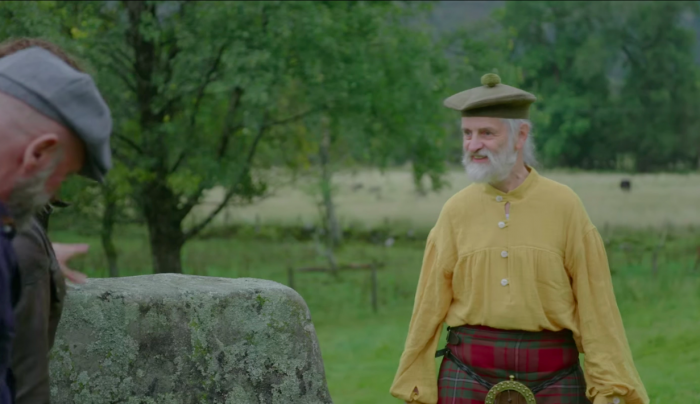 He looks like if a pebble were to hit him, he’d be in physical therapy for months.

Janna: if you can’t do, teach…isn’t that the old saying?

Julie: Big surprise to no one, the point of rock lifting was to prove masculinity – if you can lift a rock, you’re a man. Who cares about herniated disks or broken bones. It’s all about being a “man,” whatever that means.

Janna: I feel like Graham gave up a little too quickly. But considering his performance in further tests, maybe he was giving Sam a freebie.

Julie: Graham definitely decided that his bone health was more important than a test of his masculinity and left it up to Sam, who Jamie Fraser’d the rock by not only lifting it, but placing it on the slab. Congrats, Sam. You’re a real man now!

Janna: Weirdly enough, I have actually seen competitive Scottish rock lifting on TV. Those dudes are HUGE and some of them can lift four or five of rocks in a row. It’s insanely impressive.

Julie: I was pretty impressed Sam could lift even one. But I couldn’t help but think that while he was lifting the rock, he was going to crack in half during his attempt. See Sam? This is why you have to incorporate more leg days in your My Peak Challenge.

The Games We Play

Julie: Remember how last week, we said the van was the real star of the show? Well, it’s been upstaged by this guy: 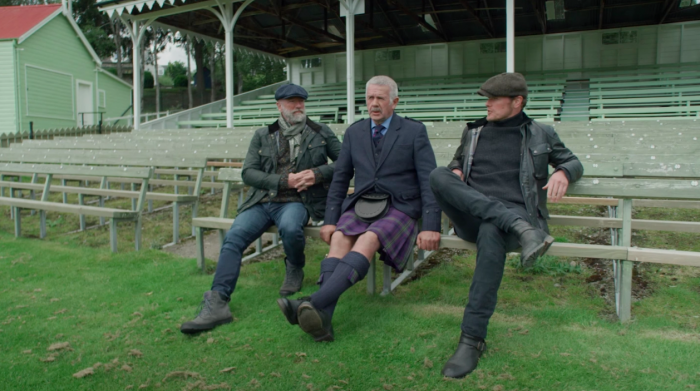 As the Highland Games Association Vice President, Charlie Murray and his stache have no time for your dad jokes, Sam.

Janna:  Well if the Queen of England and Prince of Wales regularly attended my Highland games, I wouldn’t have time for frivolity either!

Julie: Okay, so from what I’m taking away from this is that the highland games are like a high stakes PE class: tug-o-war, hammer throwing, log throwing. All jokes aside, you have to tip your hat to the Scots: they are all about continuing traditions and embracing all parts of the past, and the highland games is just a testament to that mindset.

Julie: I am not a golfer. However, my dad and Karen are, and I know that St. Andrews is on every golfer’s “Courses to Play Before I Die” list. I could see why. Those aerial shots were quite honestly breathtaking.

Janna: Did the Scots also invent mini-golf? Because that’s where I really thrive.

Janna: I’m hoping St. Andrew’s also has a Putt Putt course so that I too can partake in this national sport.

Julie: Sadly enough, I think Sam and Graham would have had more success at Putt-Putt Mini Golf Course. Watching Sam tee up and swing, all I could hear in my head was my Dad yelling, “Keep your head down! Why are you looking up?!” He would be so proud of me for remembering that.

Janna: Can we just take a moment and mention how little female representation there’s been so far? Because geez, it’s nothing but Scottish sausage out there. It’s my first real complaint about Men in Kilts thus far, but one I think deserves mentioning.

Julie: Masculinity and being a man seem to be a running theme in this episode, whether intended or not. Sam and Graham literally have two measuring contests that we all know is more than just seeing who hit a golf ball or threw a hammer the farthest. 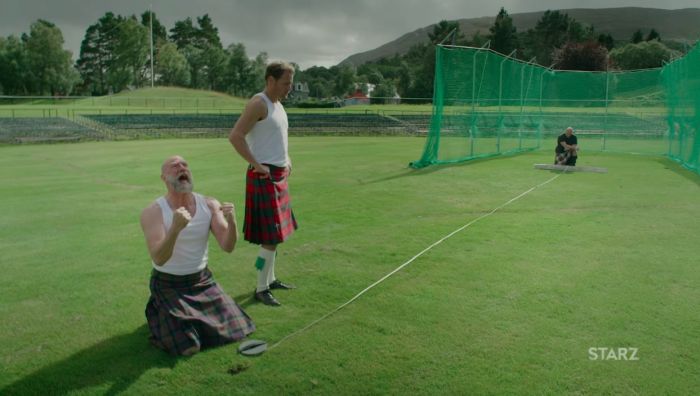 Janna: I know there’s only been two episodes, but there’s not been a woman in sight! Not one female golfer, or female chef, or even distillery employee? If the whole point of the show is showing off Scottish culture, it’s important to include women in that conversation.

Julie: Although they mentioned that women did participate in the highland games, it has definitely been testosterone laden. Spoiler alert: women enjoy golf and rugby, drinking whisky, and learning about history just as much as men. Search up clips of Scottish Women’s Rugby Union and watch women put the “hard” in hardcore. Men in Kilts, we love you but we need more female representation in the show. I mean, what would Claire Fraser say to both of you right now?

Janna: Thankfully, it looks like there will be some ladies in upcoming episodes. I just wish we’d seen some bad ass female representation in Scottish sports, too.

“Scrum. Mall. Literally there is a group of men who put the ball in the middle and you have to fight over it.”

Julie: This is exactly how some of the best free M/M erotica on Kindle Unlimited start. Was it just me or was Sam being extra precious fanboying out over being in Murrayfield Stadium?

Janna: You can tell from his socials that Sam is a huge supporter of Scottish sports. I don’t know if you saw it, but by the end of that segment, their jerseys had been signed. It was so cute. 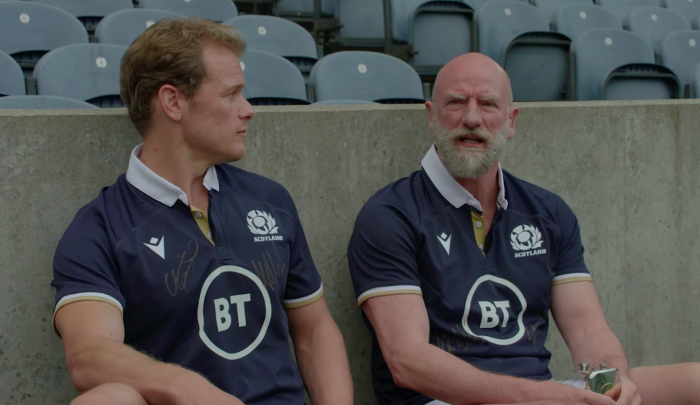 Julie: Rugby is no joke. You can’t wear any pads, they encourage human pileups, and you can only run forwards and pass backwards. That rule alone is enough to make five year old Julie run off the field, crying.

Janna: It’s also a no from me, thanks. I like my septum intact and in the proper place. No touchy!

Julie: We also got another mention of Sam’s drinking proclivities when he admitted that this was the first time he was sober at Murrayfield and Graham joked, “You’re not many places sober, are you?” What we didn’t hear was Graham’s laugh wavering off into a somber echo.

Julie: This whole episode centered around a bet to see who was more “athletic,” and surprise-surprise: Sam “lost” and was “forced” to jump naked in the Atlantic. Please note the quotation marks because knowing Sam, he probably threw that bet and his clothes were off before they left the stadium. 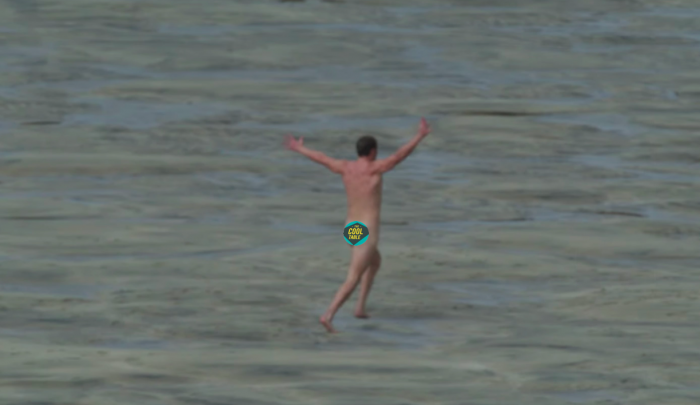 Janna: Maybe Graham has a No Nudity clause in his contract and Sam had to take the fall. Or like you’re suggesting, perhaps Sam just really loves skinny dipping in frigid water anyways. It WAS his idea, after all…

Julie: Not that I’m complaining, but I’m starting to think that Sam has it in his contract to show his ass a certain amount of times each year. Since Outlander is barely in production, it’s Men in Kilts job to fulfill that stipulation. At least it wasn’t the antiquities scholar showing us his “haggis” and making it for the waves.

Janna: Overall, this episode was still so fun! Sam and Graham’s relationship was just as entertaining as last week (haggis hunting, anyone?), and I was in giggles watching their mutual competitiveness as they took on Scottish sports. Other than the lack of lassies, the show continues to be enjoyable, informative, and the Scottish escapism we all need at the moment.

Julie: I completely agree. Even with our minor complaints, this episode still was able to provide a sense of whimsy and continues to feel like that world history class you always looked forward to in school. While we love Sam’s adorkableness, I think Graham stole the show with his own light hearted and off-the-cuff, unscripted moments.

Sure Graham may have won the bet and Sam may have lost some of his dignity as well as degrees off of his body temperature, but the real winner of “Scottish Games” was the Atlantic Ocean. Why? Do you have a naked Sam Heughan frolicking in you? No? Well, the Atlantic Ocean did and that’s more than any of us will ever have.

What were your thoughts on Men in Kilts 102? Let us know! Want more Women in Sweats? Subscribe to The Cool Table Podcast to hear us break down our thoughts on Sam, Graham, and the show!

The Cool Table Has a Podcast Now!@thecool_table
999 Following 985 Followers
Bingerton By Episode: Bridgerton 207, Oceans Apart https://t.co/sXXD4Zykr4
2 days ago
Is that you waiting for #Bingerton to start? I see you. OH, that's me. ANYWAY, we will be live talking #Bridgerton… https://t.co/xaB42Ta31S
2 days ago
4
RT @YTCShepard: That moment in an author’s first historical or paranormal romance novel when the hero introduces himself and is like, “I’m…
2 days ago
396
@santasmbslt Yes! In 20
2 days ago
@LSULeslie Let him watch Marley and Me
2 days ago
2
Archives
Entertainment, TV