Welcome back, Sassenachs. Men in Kilts took a brief rest stop last week, but Sam and Graham are back on the road and the show is back on track in more ways than one. The last few episodes went off the beaten path and got a little lost – focusing more on frivolous antics than on Scotland and its culture. Clearly, Men in Kilts found its GPS and a better sense of its direction because this week’s episode – “Scotland By Land, Air, and Sea” – is so far the best of this travel series.

Gas up that Scottish Shaggin’ Wagon, and let’s fall in love with Scotland.

Our Thoughts on Men in Kilts Episode 106:  Scotland By Land, Air, and Sea

Julie: This. Honestly. Just this.

Janna: What a visual feast this episode was! So much gorgeous scenery and familiar sights from my trips there. I was particularly thrilled about the blooming purple heather that kept showing up-at Kilt Rocks, in the camper van, tucked in the handlebars of their bicycles. Then there was the interesting trivia and anecdotes from Gaelic culture, geology, and Scottish folklore.

Julie: I’m a sucker for stories and the lore of these lands, like how the Scottish islands came about from a “hag” dropping pebbles and stones. If they had taught that in geology classes, I would have changed my communications major in a heartbeat. 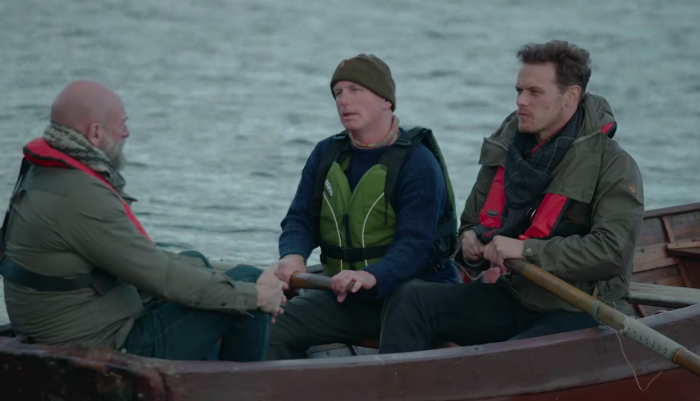 Julie: Apparently, my serenity prayer from last week worked because not only didn’t I mind the guest appearance from Gary Lewis, I loved seeing him and his little row boat as well as his interaction with Sam and Graham. My only complaint is that we didn’t get enough Gary, who I think should be the third man in kilt on this road trip.

Janna: It was so good to see Gary again! It was the perfect special guest appearance (although I’m still holding out for Caitriona at some point). And I loved what he said about the Gaelic mindset of ownership-that the land owns you. Which is a concept I 110% identify with, as Scotland has owned me since my first visit in 2006. It reminded me of a quote by Scottish poet Norman MacCaig that I saw on the walls of Scottish parliament in Edinburgh:

“Who possesses the landscape? The man who bought it or I who am possessed by it?

False questions, for this landscape is masterless and intractable in any terms that are human”

Julie: If there isn’t “Scotland: The Land Owned Them” bumper stickers, it will be a missed marketing opportunity, Starz. 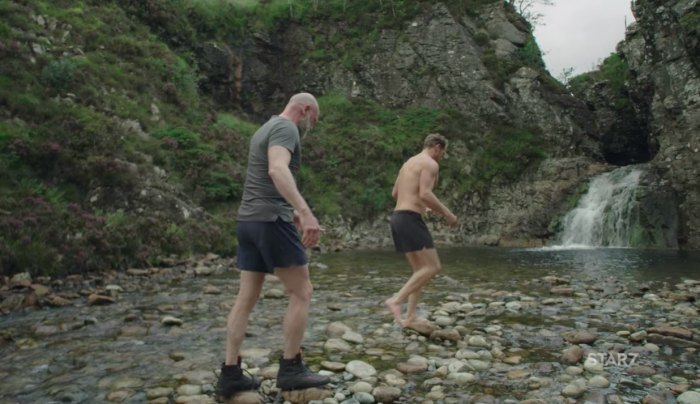 Julie: Well, we haven’t had a shirtless Sam Heughan in almost a month and according to the laws of physics, that cannot happen or the world will stop spinning and all life will cease to exist. Thank God we have the Fairy Pools of Quiraing to put the world back on its axis.

Janna: Sam is still keeping it tight, and I love that for him, but honestly-was gracing us with his sculpted bod worth the midges? He essentially handed himself to them on the platter. Graham says that wild swimming is important in Scotland, but between the risk of hypothermia and the eternal swarm of midges, that’s gonna be a no from me. You can find me on the banks, taking artsy photos and maintaining my core body temperature.

Julie: It was absolutely gorgeous, but it’s one of those natural beauties that you admire from a warm, dry distance.

Janna: I’m a little surprised we didn’t get them singing the “Skye Boat Song” in this section-as soon as they got on the ferry I was belting out “O’er the sea to Skyyyyyyyyyyyye!” I’m so happy they spent so much time on Skye this episode. I’ve seen the Quiraing and Old Man of Storr (by car), but the Fairy Pools are still on my bucket list.

Now Auditioning for the Role of Danny Zuko

Julie: In past recaps, we’ve recognized and honored the cable knit sweaters, use of pageboy caps, even the bespoke tailoring. Janna, I think it would behove us to honor this week’s wardrobe choice: The Leather Jacket™. 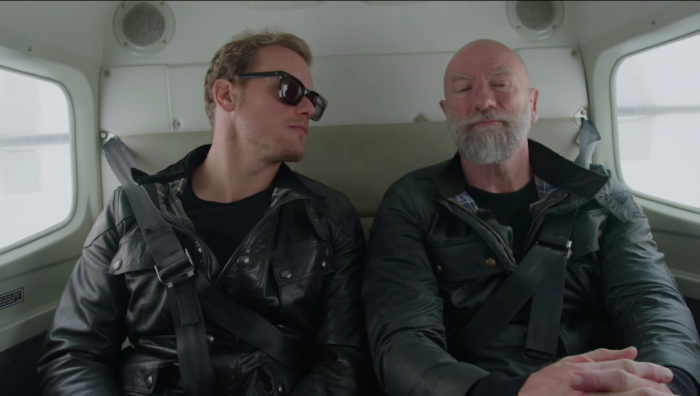 I wouldn’t be the least shocked if we saw “T-Birds” spray painted on their backs. Did they join some type of Scottish motorcycle gang?

Janna: Look I’m gonna be real honest and admit that I didn’t even notice they were both decked out in matching black leather on my first viewing.  My weak observational skills aside, it’s a great look.

Off the Scripted Path

Julie: This episode works on so many different levels, and one of them is definitely the more natural, off scripted banter between Sam and Graham. These two have the chemistry of old friends and nowhere is it more apparent than when they have these freewheeling, genuine conversations with each other. When Sam sincerely laughs – and I mean laughs with Graham rather than at him or even at his own bad jokes –  I laugh. These are the in-between moments where I’m all in.

Janna: I was smiling for so much of this episode-it was reminiscent of the joy and fun of Episode 101. The impromptu rock session in the camper van was probably my favorite moment-Sam head banging while slapping midges off his face while Graham growls “Satan” on repeat had me giggling.

Get Your Rocks Off

Julie: It wouldn’t be a Men in Kilts episode if we didn’t have one moment where either Graham is questioning his life choices or his health and well-being is being threatened. This week, I think we got both when the men visited Kilt Rock for a little abseiling lesson. What did Graham learn? That he could say “fuck” at least twenty times in a single minute. 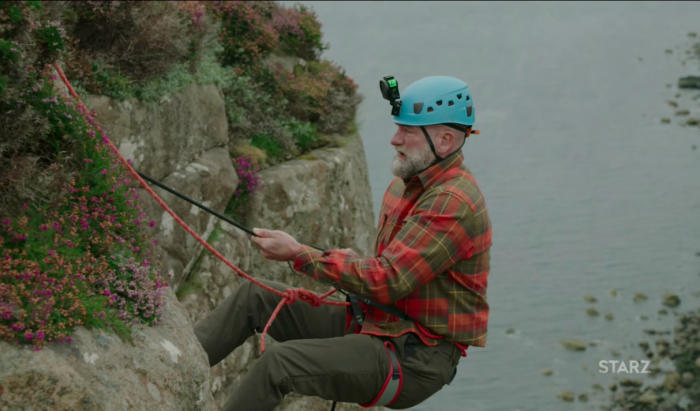 Janna: Sam mentioned that an alternative title for the show had been “Ways of Winding Up Graham,” and that’s not too far off the mark. I was really impressed that Graham faced his very convincing fear of heights-I certainly wouldn’t be willing to face my crippling fear of moths on television. And I love that his Famous Last Words to Sam were “Shut Up”.

Julie: Once again, Graham speaks for us all. Poor Graham. The beauty and serenity of Kilt Rock was a sharp juxtaposition to the visceral fear and terror in Graham’s voice. I felt that scene so hard, I stopped breathing while watching him descend the rock in painstaking slowness. Round of applause, Graham. You earned those uncensored f-bombs.

Julie:  If I could only show one episode of Men in Kilts to convince someone to watch, without a doubt it would be this one. “Scotland By Land” was the perfect love letter to the Scottish landscape and all its natural wonders. It even had the right amount of humor, Outlander, and Sam being Sam – something that previous episodes struggled with. When it ended, I actually craved more: more Scotland, more lore, more images of green hills and quiet lakes. Scotland’s National Tourist Organization needs to use this episode in their promotional marketing – it was that good.

Janna: I agree-this is the blue ribbon, prize-winning episode of Men in Kilts so far. And considering how much I loved (and drooled over) the Food and Drink episode, that’s saying a LOT. My enthusiasm is back in full force, just in time for Clans and Tartans. Fingers crossed my Sinclair kin get a shout out-the Sinclair crest is a “Cock Rampant”, which seems to mean just be a regular old rooster, and you know Sam would have a joke for that.

Julie: Don’t worry. Graham has a long, silent stare ready for that.

Who Won the Episode

We were going to give it to Scotland, but we have to give credit where credit’s due. This week’s winner is The Hag. Without that cailleach, there would be no My Peak Challenge, no Sam Heughan Instagram hike thirst traps, and no setting or context for Graham to say, “I really need you to stop talking, Sam. I’m serious.”

Not all heroes wear capes. Some just drop stones to create islands and control winter.

Let’s fall in love with Scotland together! Tell us what you thought of Men in Kilts 106 in the comments!

The Cool Table@thecool_table
1.0K Following 1.0K Followers
Yesssssss https://t.co/rGaJC4TAJ4
1 hour ago
1
Latto Brought Big (Villain) Energy to #TheBachelor for episode two of Zach's season. https://t.co/qyqmqEZIpH
9 hours ago
1 4
@pagemelt I know nothing about them but it's a good assumption since the album is titled Dear Wormwood. I have so m… https://t.co/rXXSQbWwlG
10 hours ago
2
@pagemelt isnt the whole album based on the screwtape letters? RED FLAGs
11 hours ago
1
@MrsKowski unfortunately yes
11 hours ago
Archives
Entertainment, HBO, TV