An empty, dark stage. Suddenly, an explosion fills the space and the dissipating smoke reveals the Women in Sweats. The first Woman holds a broom. The second Woman holds a Dyson Cordless Vac because she was too lazy to take the extra ten steps to find a broom. They both hold a margarita in their other hands because this week’s Men in Kilts is all about Scottish superstition and witchcraft, and it gave them the excuse to drink Practical Magic’s “Midnight Margaritas” even though it’s 3 pm. They both have a witch’s hat affixed to their heads, although technically Janna’s wearing a toy Harry Potter sorting hat because by God, she’s someday going to get into Gryffindor. After they finish humming, “Coconut” for the tenth time that day, they look out at the audience and chant:

By the pricking of our thumbs,

A new Men in Kilts this way comes.

Our Thoughts on Men in Kilts Episode 104: Witchcraft and Superstition

The following is a joint statement from the Women in Sweats:

We know that every week, we have a moment where we honor the “real star” of this show, like the guys’ Scottish Shaggin’ Wagon or a hot Scottish chief with the face of an angel and the instrument of the devil. However this week, we have to tip our hats – and yes, that is a Sam Heughan bad dad joke – to this week’s real star: Sam’s caps. 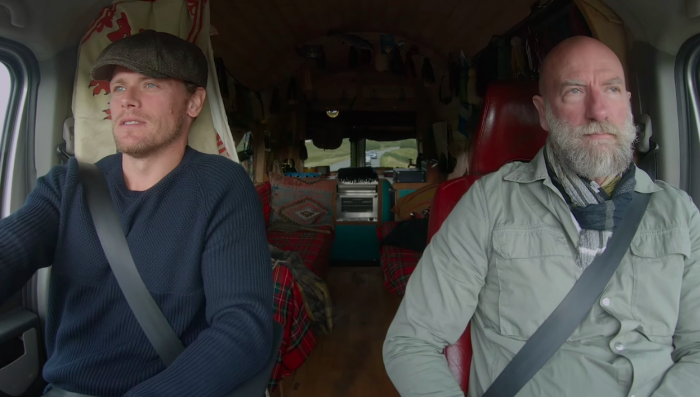 He’s leaning hard into the pageboy caps these last few episodes, and we’re not exactly hating it. This is Peak Newsies/Peaky Blinders and all we need is either Sam to bust out into some “Seize the Day” and/or beat the shit out of a rival gang member on some dirty Birmingham Streets, and we’d be done. #PageboyCapPorn

Who You Gonna Call?

Julie: It’s only apt that the episode starts with the quintessential tourist ghost tour: an ancient gravesite, ghost stories, and always one cautionary tale about a living person who dared to disturb the dead only to be never heard of again. All that’s missing is the Disneyland Haunted Mansion music and hitchhiking ghosts, and goosebumps would be on my arms. I love it.

Janna: I wouldn’t say I believe in ghosts, but I’m still a sucker for creepy ghost stories and supposedly haunted locations-though not enough to get drunk and seek shelter in one. Google “Most Haunted Places in Scotland” and Greyfriars Kirkyard is usually at the top of every list (along with a Groupon offer for £10 off a graveyard tour). A church, prison, and a graveyard? Peak Spooky Energy, even without the ravens and creepy bloke in a plague mask sneaking up and scaring you.

It really is an iconic location, but honestly, all of Scotland feels haunted-it just has that vibe, and maybe that’s one of the reasons I love it so much. 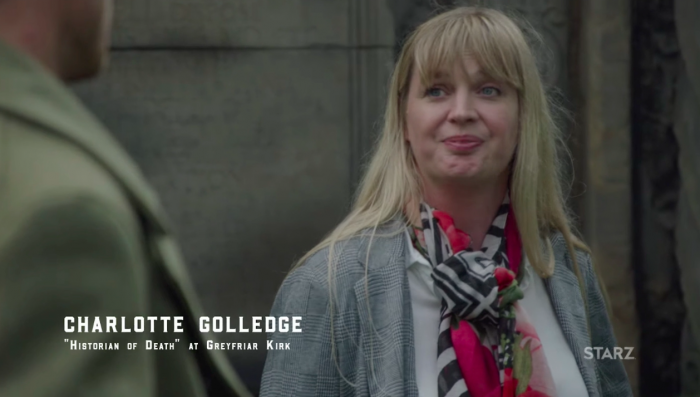 Julie: Ten bucks says she’s the life of any party she attends and instead of singing “And forever more” at the end of the “Happy Birthday” song, she adds “You’re closer to death.” Also, Charlotte Golledge would draw skulls as a child? Honey, that’s pure catnip to any child therapist. I must know more!

Janna: Charlotte is living her best life as a Death Historian and I envy her. I also would be 100% surprised if ‘Death Historian’ isn’t an actual degree offered at all Scottish Universities.

Julie: When they found this “witch expert,” did they have a specific checklist?

Janna: I would not have wanted to be a witch-accused or otherwise-in this time period. With our intelligence, independent nature and wicked snark, plus our ability to float in water, we would have definitely been burned to a crisp, multiple times over. They would dig up our ashes just to burn them again.

Julie: The English teacher nerd in me fanned hard over this segment and its connection to Shakespeare’s Macbeth. From Graham reciting the words from the titular villain (or tragic hero, you make the call) to Wormiston Castle’s connection to Macduff, give me all this Shakespearean tragedy goodness.

“I don’t want this episode to be just one near heart attack after another for me, if that’s okay.”

Julie: Can we take a brief time out and discuss poor Graham in this episode? The cold open starts with him – rightly so – dropping the show’s first “Fuck!”  in reaction to being scared shitless by someone in a beak mask. He then drops another f-bomb during the witch segment when he “feeds” a witch (Yes, Sam screams too, but Graham’s is definitely coming from a visceral place). Then the poor man is forced to demonstrate a witch’s public shaming. This is definitely a LEWK and not a good one: 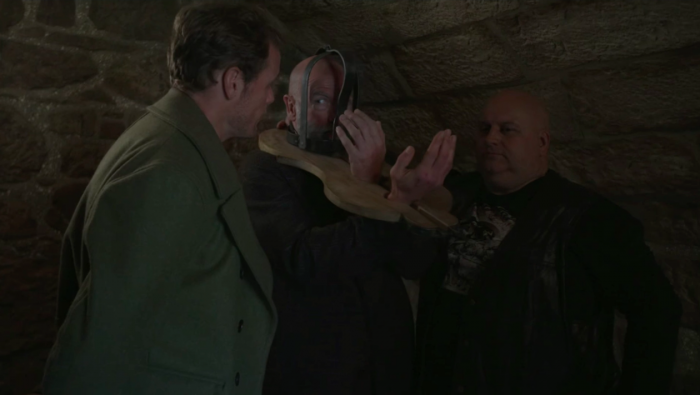 I know this episode is all about witchcraft and superstition, but I’m starting to think the actual theme of this week was exploring the depths of Graham’s degradation and how high he could scream. Spoiler alert: it’s pretty damn high.

Janna: Poor Graham; all he wanted was to explore Scotland’s most haunted and creepy locations in peace and without the threat of a heart attack. Is that too much to ask? It is when Sam Heughan is your travel companion.

Julie: Since this week is all about superstitions and witchcraft, it doesn’t come as a surprise that the guys would take a quick detour to visit the Callanish standing rock formations, otherwise known as the real Craigh na Dun.

Janna: The Callanish stones have been on my bucket list for ages! They are physically awe-inspiring, but as a history lover they drive me crazy with curiosity. Graham said he kind of liked that we’ll never know what they were used for, but I’m with Sam on this one. Send me back 5000 years in time because I NEED TO KNOW, DAMMIT.

Julie: With Sam as our tour guide, we learned that the Outlander crew created lifesize casts of the rocks and filmed in a studio, and that the film crew used a hundred cameras to film a 360 degree promo shot of Sam and Cait at those fake stones.What did we really not learn about? The actual damn stones, themselves.

Janna: All these Outlander connections could have gone in the credits, stayed in the Clanlands book, or shown up in BTS footage.

Julie: Although Sam briefly touched upon the stone’s history – over 4,000 years old, probably used for pagan rituals (um, duh) and/or something about the rotation of the moon – we learned about a show we all know probably more than Sam. This is where Men in Kilts needs to find better footing: the overwhelming lean into Outlander rather than Scotland, itself. We should have had a historian explain the rich and complex history of these formations and not Sam repeating what I’m sure was found on that visitor’s guide at the gate.

Janna: While a lot of the Men in Kilts audience are indeed Outlander fans, what we appreciate so much about the books is how much history Diana Gabaldon included. Trust us-we are 100% okay with more history!

Julie: We did get Sam recreating the ultimate Outlander fan photo op by posing with the stones. 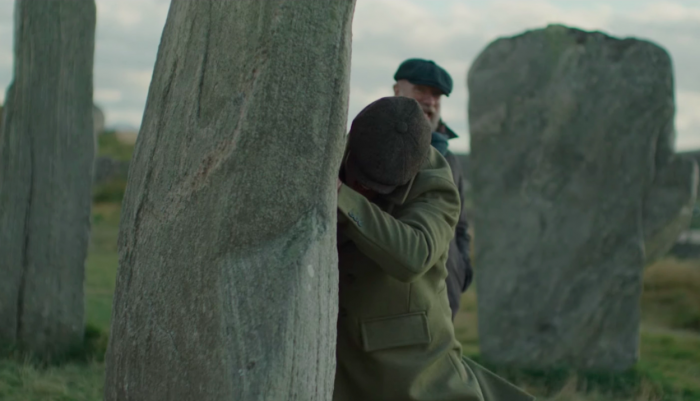 Super meta of him. All that’s missing is him with the Clan Fraser headstone and then he will definitely earn his Outlander fandom badge.

Julie:  The final stop is a Beltane party, which apparently feels like a mix between any scene in a Baz Luhrmann film and when you wash down a couple Tylenol PM with Mountain Dew.

Janna, did you know that if you search “Beltane” on Pinterest, you’ll get thousands of ideas for your own pagan fertility celebration? My favorite? “Buy yourself a bundt cake. Stick a long straw into the center and tie little ribbons onto it. BOOM. You got yourself a very sexual may pole cake.” No joke – this is an actual suggestion.  All the more made serious by the addition of the “BOOM.”

Janna: Oof. I would not want to be the one offering a bundt cake maypole to whatever gods and goddess come out for Beltane. But Beltane looks FUN, providing I’ve imbibed enough alcohol and am rocking a flowing white gown.

“Be open to whatever may happen.”

Julie: The last thing you say before trying CBD gummies for the first time. 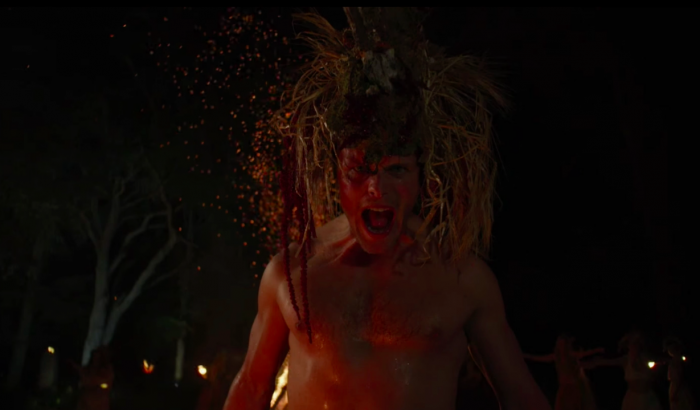 Julie: Let’s be real, this segment was all about having Sam take off his shirt and dance around a fire. I’m definitely not complaining and would like to see the outtakes and director’s cut, but what we’re watching here is either Sam at every music festival or what he’s like when he’s had sugar after 8 pm.

Julie: The show continues to add to my ever growing, Scottish Landmarks to See Before I Die list. From ancient gravesites to standing stones, Men in Kilts serves up that tourist eye candy that makes me long for travel. However, this episode somewhat came up short for me. What should have been an episode filled with Scottish mystery, suspense, and magic, instead became Outlander lite: more about the show’s clips and moments and less about actual Scottish history and culture. It seemed each segment just missed the mark, giving us tidbits without substance.

Janna: While I really liked the subject matter of this episode, the “scaring Graham gig” did get a little old. I’m having to adjust my expectations of the show a little, since I’m not watching primarily for Sam and Graham, but because I love learning more about Scotland. But if the show isn’t overly educational on its own, it is at least inspiring me to do my own research and find out more about these topics and locations.

Julie: While I understand this episode was trying to maintain some balance with an otherwise dark subject – the trial of witches, beliefs in spirits, and pagan rituals – the scales tipped a little too excessively towards slapstick at the expense of this Scottish history. Trust your audience, Men in Kilts. We want this intense, twisted history as much as the light because we be freaks.

Well, it definitely wasn’t the witches.

The clear winner of Men in Kilts 104 is…the Callanish Stones! If you looked that good at 5,000 years old, we’d be reverently throwing our bodies against you, too.

Okay, our fellow witches! What did you think of this week’s Men in Kilts? For all things MIK and Outlander, click here!

The Cool Table@thecool_table
1.0K Following 1.0K Followers
@jamiesrule @jamadoria @coolstorymere I know you know this, but I"ve had pixie cuts off and on since 1997 and m*n h… https://t.co/VsXyyN7PpC
3 hours ago
4
@LSULeslie @schizoreads I’ve legit never even heard of this
2 hours ago
@chels__ebooks Yes! Josh O’Connor supremacy! I watched this right after I got obsessed with The Durrells ❤️❤️❤️
2 hours ago
@maria_gb75 Keep him
2 hours ago
@baskinsuns AGREED. I love love loved that as a kid (and vowed to be able to do it so someone would love me)
2 hours ago
1
Archives
Netflix, Shadow and Bone, TV

Getting to Know Freddy Carter, Our Kaz Brekker from Shadow and Bone