This is it, Outlander fans –  the last leg of our Men in Kilts safecation to Scotland is coming to a close. Just like any family vacation, there were wonderful sights, memories, and a few laughs. Of course, there were also moments of frustration, annoyance, and bumps along the way (way too many Outlander clips, pretty much almost all of episode 105, Sam and his dad jokes).

No matter the lows, Men in Kilts gave us all the opportunity to escape the worries and stressors of this past year, and travel – without a nationally mandated quarantine – to a land of rich culture, breathtaking views, and a history filled with triumph and loss. Since we’re on the subject of history, no journey to Scotland would be complete without a final stop to the battlefield that both defined Scotland’s fighting spirit and led to the downfall of the highland culture.

Pull on those sweats and pour yourself a dram of whisky: we’re going to Culloden.

Our Thoughts on Men in Kilts Episode 108:  Culloden: Scotland’s Most Infamous Battle

If you’re looking for last week’s recap on Men in Kilts episode 107: “Clans and Tartan,” just like Sam’s comedic timing, it’s missing. We have a couple of reasons:

Not Your Average Travel Show

Julie: Being that Ron Moore is a consulting producer, it’s only fitting that the final episode focus solely on what he loved best: the Battle of Culloden. You have to hand it to Men in Kilts – not all travel shows open with a violence warning. That warning was an understatement. I practically watched this entire episode with my hands over my eyes and/or ears: you were either watching blood gushing or a bayonet slicing through flesh or hearing a dirk enter a heart.

Janna: It’s not a trip to Scotland without a visit to Culloden, even if you’ve heard of Outlander. When it comes to Scottish culture, no single event affected the country more than Culloden. It makes perfect sense that they would end there, even if it meant that Men in Kilts went out on a slightly somber tone.

Julie: Give me Alistair Moffat, his scarf, and his historical storytelling any day that ends in a “y.” Listening to him was like being in a college history class that you refused to ditch. Even these two were in quiet awe: 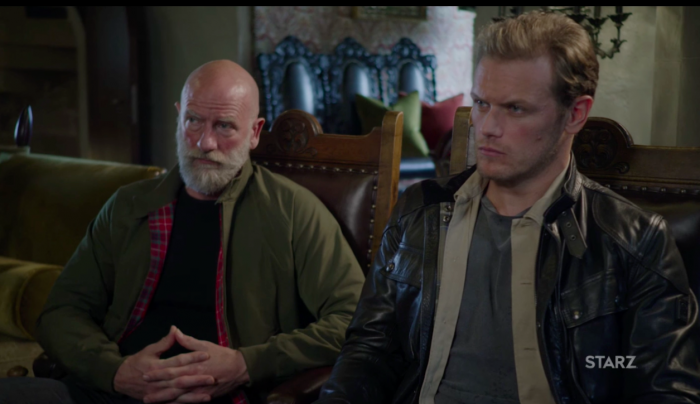 Janna, I know as fans of Outlander, we saw the show’s interpretation of the battle, but Alistair’s history lesson gave me a new understanding and appreciation of what the Scots had to endure on that tragic day. I actually had chills when we learned how the highlanders would evoke the spirits of their ancestors by reciting their genealogy, and to do it in Gaelic was completely badass.

Janna: Girl, SAME. I could sit in that gorgeous sitting room and listen to Alistair educate me on Scottish history all day. A few of his books might be sitting in my Amazon cart right now. And forget graveyard tours-that “summoning an army of the dead” bit was spooky as hell. I love it.

Boys With Their Toys

Julie: Apparently, Sam and Graham evoked their Jacobite ancestors when these guys showed up to teach about Culloden combat: 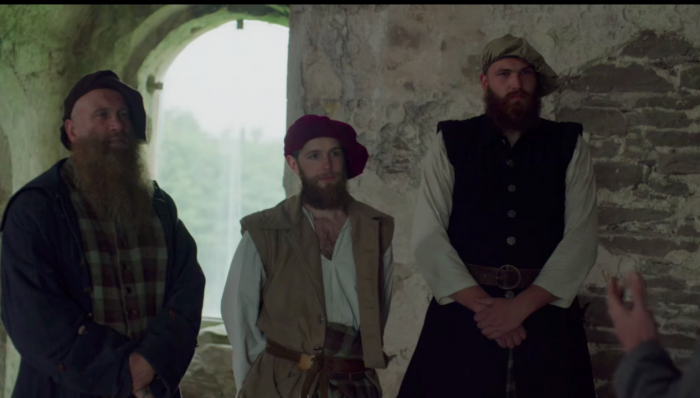 This took me back to the first episode of Outlander when I had to find the close caption to understand what they were saying because these Culloden reenactors’ Scottish brogue was THICK.

Janna: 10/10 Janna’s would buy a Groupon for Sword Fighting classes with these three guys. And I love that they chose Doune Castle for this scene-not just because it was an Outlander film location, but it’s just a damn cool castle. Definitely worth a visit, even if they don’t let you swing real swords around.

Julie: Anyone looking to close their Apple exercise or move rings, I think you found a way with this nine move fighting routine because damn, that was not easy. Did you notice they gave Sam and Graham training swords, which begs the question: Do they reenact with actual swords? That’s high stakes role playing right there. Mad respect. 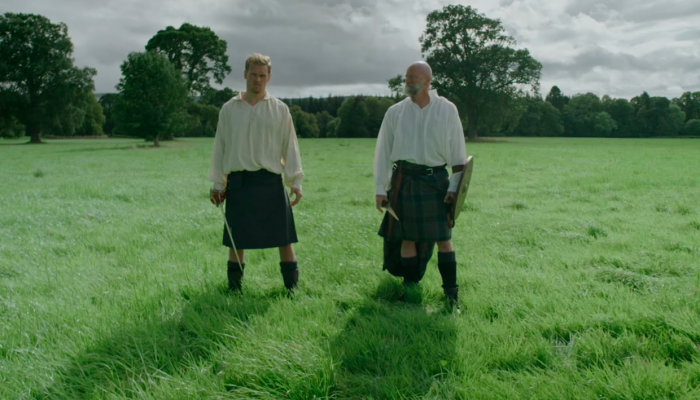 Julie: I think Graham McTavish reciting Shakespeare on the fields of Culloden is my new love language. To use the “Such Stuff Dreams Made On” monologue from The Tempest perfectly encapsulates the somberness of this sacred ground where so many highlanders – over 1500 men alone – lost their lives.

Janna: I visited Culloden in 2014, and to the eye it’s just a cold, windy moor, but walking from one side to the other, standing at the flag that marked the Jacobite line…I wouldn’t say it feels haunted, but like the land remembers. It’s hard to speak when you’re there, like only somber silence can appropriately acknowledge what happened on that day.

Julie: To see the actual expanse of the land and know that these men, women, and even children did not have a fighting chance to win but still took that fighting chance and charged without hesitation into that 300 yards of terrain to save their country and way of life? You cannot help but respect and honor that.

Janna: It kind of made me think of the Battle of Thermopylae (aka the plot of the movie 300). Everything was stacked against them, and they had to know it was a lost cause. They were tired, starving, outmanned and outgunned, but they lined up and fought bravely anyways. 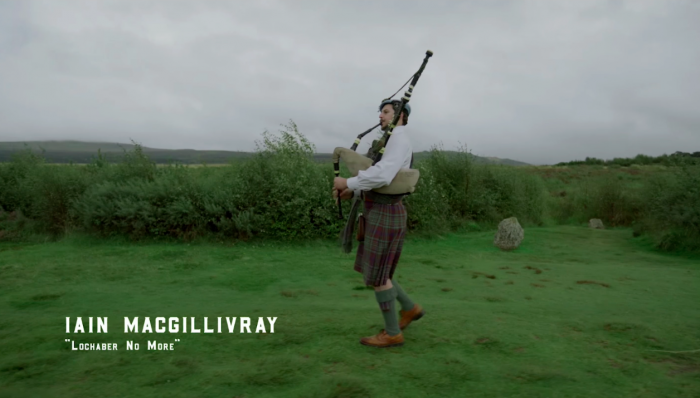 Janna: Iaaaaaiiiiin. Who do I have to call to get Iain on as a co-host for Season 2? Or at least show up playing bagpipes in every episode?

Julie: The most underrated part? This brief exchange:

Sam: Did Jamie Fraser fight in this battle?

Couldn’t put it any better even if we tried, Graham. However, and I am shocked that I am about to say this, the use of Outlander clips – especially during the gruesome battle – didn’t detract from the show itself. In fact, I feel that by showing these clips again in the context of the horrors of Culloden, it added a deeper understanding that we didn’t necessarily have before about this battle – its brutality, violence, and horrors. It only took Men in Kilts eight episodes to finally use Outlander in the right context! Better late than never!

Janna: The Outlander clips really helped you get a sense of the chaos. It’s one thing for your brain to acknowledge “yup, a battle, yelling and fighting and smoke and cannons go big boom”, and another to really see and hear how horrific the battlefield would have been. At the Visitor’s Center there at Culloden they have a 360 degree screening room where they play a video reenactment that immerses you in the horror of the experience. You walk out of that room a different person.

Julie: With only two minutes left of the episode, you would think that there was no way Sam could reach Peak Heughan™ status. You would be wrong.

I mean, does Sam Heughan now even exist without Sassenach Whisky? I now believe that we can’t have one without the other.

Janna: By April of 2021 we have now seen approximately 10,000 Instagram photos of Sam holding a glass of his own whisky, but back when they filmed this in 2019 I guess cracking open one of the very first bottles would still have been really exciting. I personally am waiting for it to go on sale before doing the same. Throw a girl a coupon, Sam!

Julie: Well, Janna, this is the end of the road for Men in Kilts, the Scottish Shaggin Waggon, and Women in Sweats. Sadly, it’s time to rediscover how jeans work. Honestly, even with our small criticisms and worries, Men in Kilts was the perfect escapism and for thirty minutes each week, we discovered a foreign land with fresh eyes. All you had to pay was a Starz subscription. Men in Kilts was the perfect antidote for Droughtlander and a heartfelt love letter to the country and her cultures and traditions. Now that it’s over, all I want to do is jump on a plane, walk in the rolling hills and fields of heather, and sip whisky. Mission accomplished, Men in Kilts.

Janna: My need to visit Scotland is always pressing (she says, drinking tea from a mug that reads “Scotland is Calling and I Must Go”), but Men in Kilts managed to kick that up a few notches every Sunday. I’ve been left with a deeper appreciation for the land my heart calls home, a teensy weensy crush on Clan MacGillivray’s Commander, and a whole new To-Do list for my next trip. So well done, Sam and Graham. Bring on Season 2!

Who Won the Series

We’re going to give it to you, Outlander fans. You had to endure the longest period of Droughtlander, and Men in Kilts was made to remind you that you just don’t love Outlander; you need Outlander, almost as much as you need that over $100 bottle of Sassenach Whisky.

What did you think of the finale of Men in Kilts? Let us know! Women in Sweats aren’t done just yet! We’re coming with another TCT Podcast Episode! Missed the first one? Click here to listen, subscribe, and rate!

The Cool Table@thecool_table
1.0K Following 1.0K Followers
RT @BlessAmysHeart: And @bethorne created a reading list/reference guide she mentions during the show. I say Beth is the brains, and I’m th…
16 hours ago
1
RT @BlessAmysHeart: Want to know what I believe now after leaving the #Evangelical church? Check out the latest episode of our #Exvangelica…
16 hours ago
2
@chels__ebooks if you can't HEAR and SEE it, you aren't fit to lick booktok's boots
20 hours ago
4
Archives
Book List, book review, Books