Season 2 of Young Royals dropped recently on Netflix, and it is an angst lovers DREAM. (And look, I know that the speed with which our streaming services are dropping content means that Young Royals Season 2 seemed to drop A LONG ASS time ago, it really hasn’t been that long; we just live in a hellscape of content saturation).

Anyway, I loved it. My daughter and I sat on the couch and watched the entire season in one go while screaming, crying, throwing up. And as I was watching, I was thinking of all the book this could be compared to and couldn’t help but make a list for you.

Books That Remind Me of Young Royals

There are, of course, the usual suspects. Red, White and Royal Blue (a prince and a president’s son engage in ALL the banter), Heartstopper (sweet, adorable teens fall in love to minimal angst), Playing the Palace and Boyfriend Material. Even A Gentleman’s Guide to Vice and Virtue. There are tons of options.

BUT the books I could not get out of my head while watching the Crown Prince of Sweden navigate his love for a commoner and his duty to his family are His Royal Secret and His Royal Favorite by Lilah Pace. 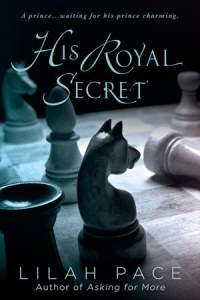 James is the handsome and worldly Prince of Wales, heir to the throne that his grandfather has held for decades but is steadily creeping closer to being his … only, he’s harboring a secret he’s sure he can never reveal. The Prince of Wales is a gay man.

Is that a closet story or WHAT? Can you imagine … a young 20-something heir to the throne and the figurehead of the Anglican Church who is afraid the British people would never accept him as king if he tells the truth about who he is??? What would a young prince do in that situation? Get a beard? You betcha. Flagellate himself for being cowardly? Sure. Have sex with a stranger who intrigues him over a game of chess one afternoon in rainy Kenya? NO? OH YES HE WOULD.

That’s where The Royal Secret begins. But it is most definitely not where it ends. James begins an affair with Ben, a nomadic business reporter that he meets on a diplomatic visit to Africa. Ben is the last person in the world to care about the royals, and he despises entanglements that tie him down. So his understanding with James (which include very hot clandestine sex romps at Clarence House complete with landline rendezvous and secret codes) works perfectly. Of course there will be no expectations from the deeply closeted future king of England.

Interview with the Author

Back in 2015 before these books were coming out, I had the chance to sit down with the author and ask a few questions. Here’s that interview:

M/M romance has been on the upswing of mainstream romance for awhile now. I love it, and wonder … what drew you to it?

LP: I’ve long been a fan. While I can’t remember specifically the first m/m romance I read, I remember being struck by how different it wasn’t. The love story captivated me just the same. Of course, it gives the reader the chance to fall in love with two guys instead of just one, which is also nice!

The trope of the recognizable guy who can’t come out because of X is well-used in m/m romance, but you took it to the nth level: the Prince of Wales, future King and Head of the Anglican Church. What came first: the impossible closet case or the way he would bust out of it?

LP: This arose first as a hypothetical scenario for real life. Some British politician, arguing against gay marriage (still illegal in the UK at the time—this was a few years ago), asked what would happen if some future queen were a lesbian and wanted to marry her life partner and have a child via IVF. And I thought, What if the future queen’s a lesbian, full stop? Would the United Kingdom really deny the head of state the right to marry like anyone else? And then I started wondering about the implications in the real world. The idea of having fictional characters live through this dilemma came last.

One of the most compelling aspects of this story is the way you captured the claustrophobia of the Royals’ limelighted life. What kind of research did you do into the British monarchy’s inner workings?

LP: Might as well confess—I’ve been a royalty-watcher for a long while now. I’m neither a severe critic nor a slavish fan; it’s just intriguing, the way they lead these lives that are modern and privileged yet simultaneously old-fashioned and limited. I once lived in Great Britain, so I’d soaked up a little there. When I got started on the story of James and Ben, though, I did do a lot of extra research and reading. The best was a book called NOT IN FRONT OF THE CORGIS, which is made up of interviews with former servants in the palaces; it’s neither a fawning fan publication nor a grubby tell-all—instead it’s just some real talk about what the royals have done for them and how they act about it. Some friends currently living in the UK sent me a ton of tabloids, too, so I could get those “voices” right.

You made Ben fall in love with the Prince of Wales despite being a journalist, the natural enemy of the British monarchy. Do you like to torture your characters? 🙂

LP: Let’s face it—I do. But what mattered most for Ben was making his desire to remain unconnected feel real and three-dimensional. The “guy who won’t be tied down” is a trope—and for a good reason, we love it!—but I wanted to give Ben a very specific backstory that would explain why he had these attitudes. In many ways Ben’s much more damaged than he lets himself understand.

What’s next for Ben and James?

LP: The media spotlight’s about to focus on them with a heat and intensity neither of them has ever experienced before—and on a scale Ben never dreamed could exist. But the ultimate test of their relationship doesn’t come from the press; it comes from within.

So, if you loved Young Royals, give Lilah Pace’s Prince of Wales romance a chance. You won’t be disappointed.

The Cool Table@thecool_table
1.0K Following 1.0K Followers
RT @BlessAmysHeart: And @bethorne created a reading list/reference guide she mentions during the show. I say Beth is the brains, and I’m th…
5 hours ago
1
RT @BlessAmysHeart: Want to know what I believe now after leaving the #Evangelical church? Check out the latest episode of our #Exvangelica…
5 hours ago
2
@chels__ebooks if you can't HEAR and SEE it, you aren't fit to lick booktok's boots
9 hours ago
3
Archives
Entertainment, The Bachelor, TV