When this season of The Bachelorette premiered back in July, the Queen of England was still alive. I’m not saying those two things are connected but, based on the mess that was Gabby and Rachel’s Bachelorette finale, I’m not *not* saying it.

Listen, this finale was three hours long. Let’s just get it over with.

Our enthusiastic host, Jesse Palmer opened the night by welcoming viewers and the live studio audience with the bloodthirsty fervor of a rich man at a gladiator battle in ancient Rome. 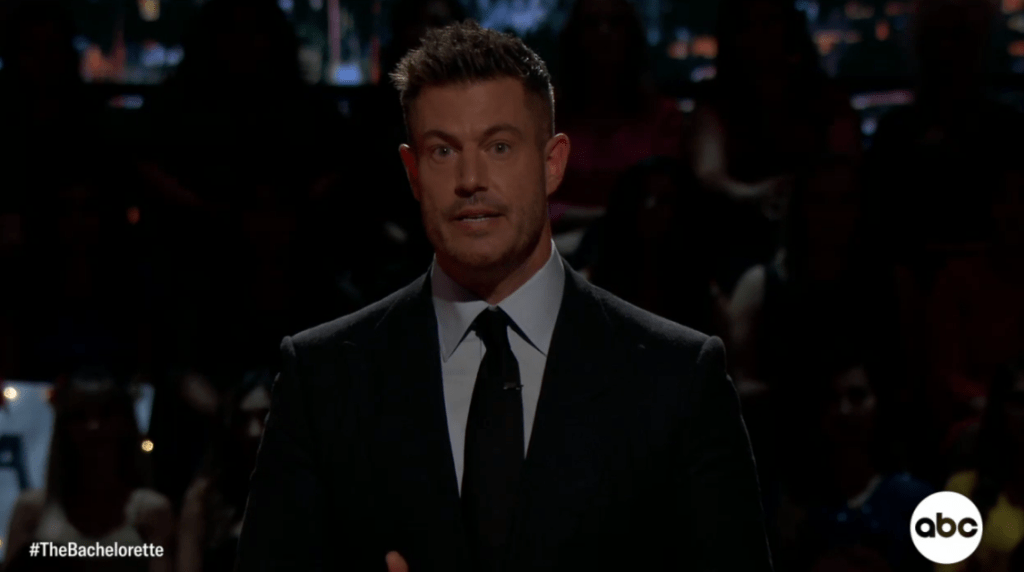 I expected a nice, “Welcome to the finale where we will finally see if Rachel and Gabby have found love.”

He dropped in with, “Maybe Tino can convince Rachel that his indiscretions were just a momentary lapse of judgment. And maybe Erich can explain away those damning text messages sent to his girlfriend just a few days before stepping out of his limo on night one.”

What in the Sally Jesse Raphael is happening? 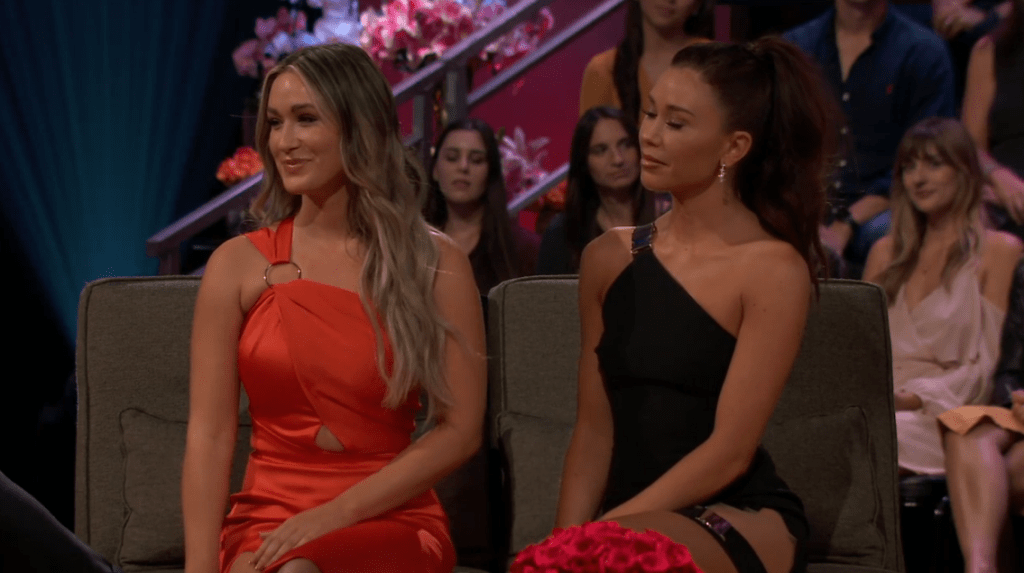 Okay fine, I knew all of those rumors because this franchise is my entire personality, but those are some serious spoilers. How were they going to frame the rest of the finale?

Oh, I get it, they were just going to rush through it.

After Jesse dropped that spoiler bomb in the first three minutes of the episode they switched over to footage of Gabby and Rachel in Mexico like they hadn’t just singlehandedly blown our collective minds.

Then it was like they fast-forwarded through the finale footage. 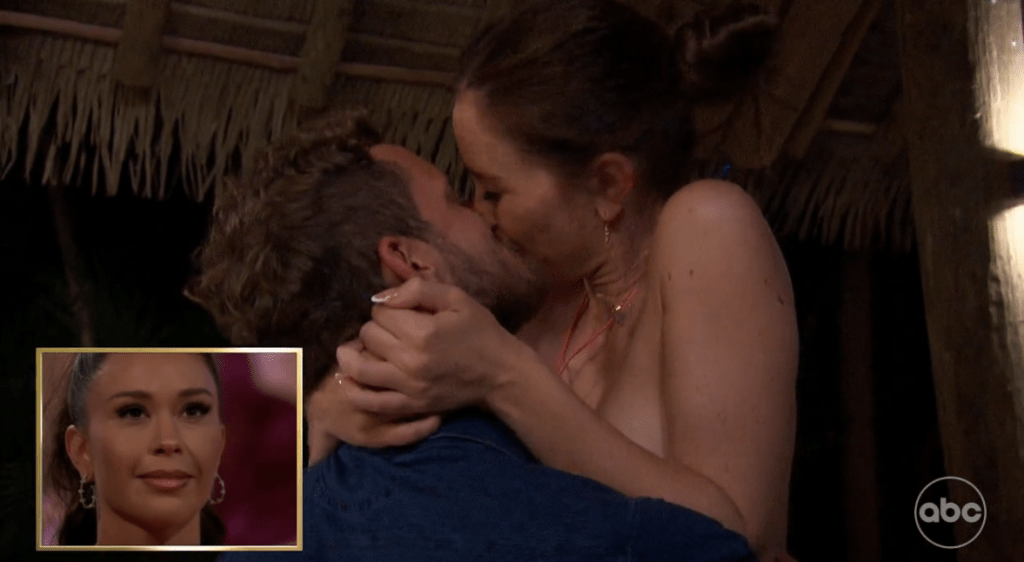 Gabby and Erich made up after the little tiff that ended the previous episode in a lackluster cliffhanger.

Rachel told Tino that he was the last man left on the show and he reacted in virtual silence except for when he would repeat “You. Are. The. One. For. Me.” in a monotone robot voice.

Just what every woman wants. 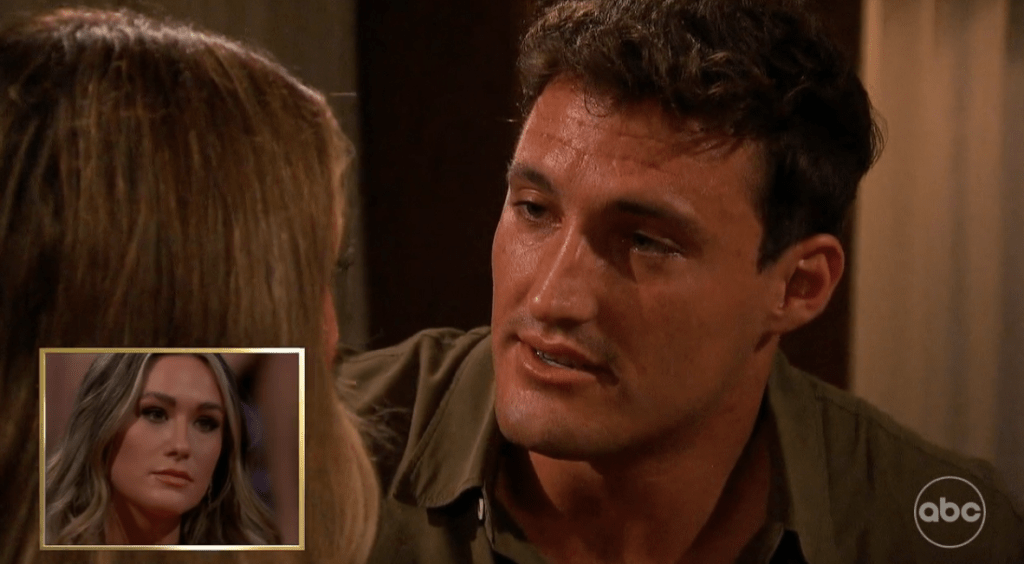 Then Gabby and Rachel met up for brunch and a gossip sesh about how lucky they were to both be with the men of their dreams.

Dreams. Nightmares. Who can say really?

At this point, we were only 24 minutes into a three hour finale and Rachel was already waiting on the platform in a white dress with Neil Lane on speed dial. 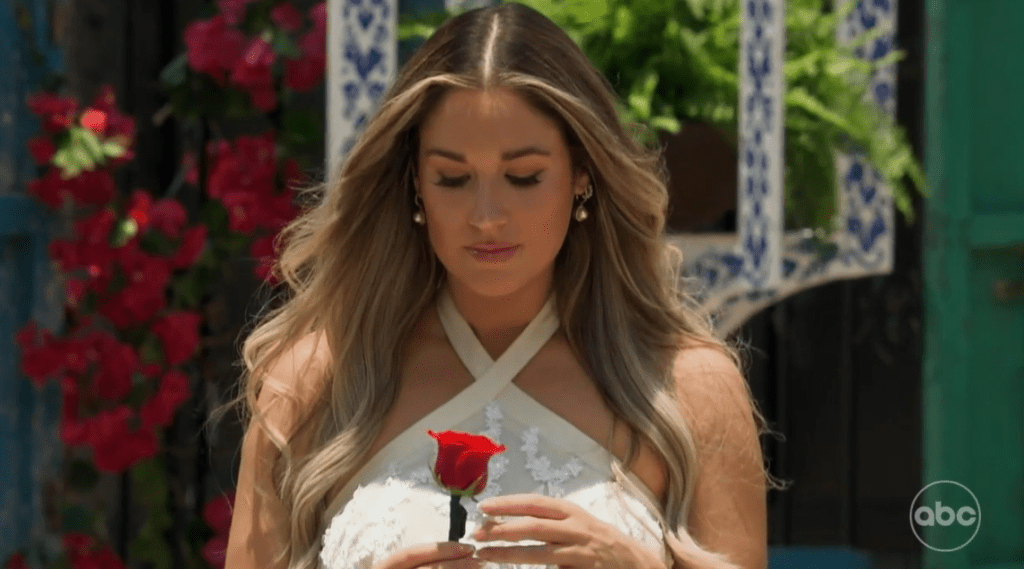 Somehow it was proposal time.

No, seriously, it took longer for my DoorDash order to arrive than it did for a proposal to show up on my screen. How bad is this reunion show going to be, exactly?

Okay so, Tino walked up to Rachel with a huge smile on his face and listened as she told him that she has never loved anyone the way she loves him.

The music swelled as a peacock cawed repeatedly in the background and then he got down on one knee and proposed. 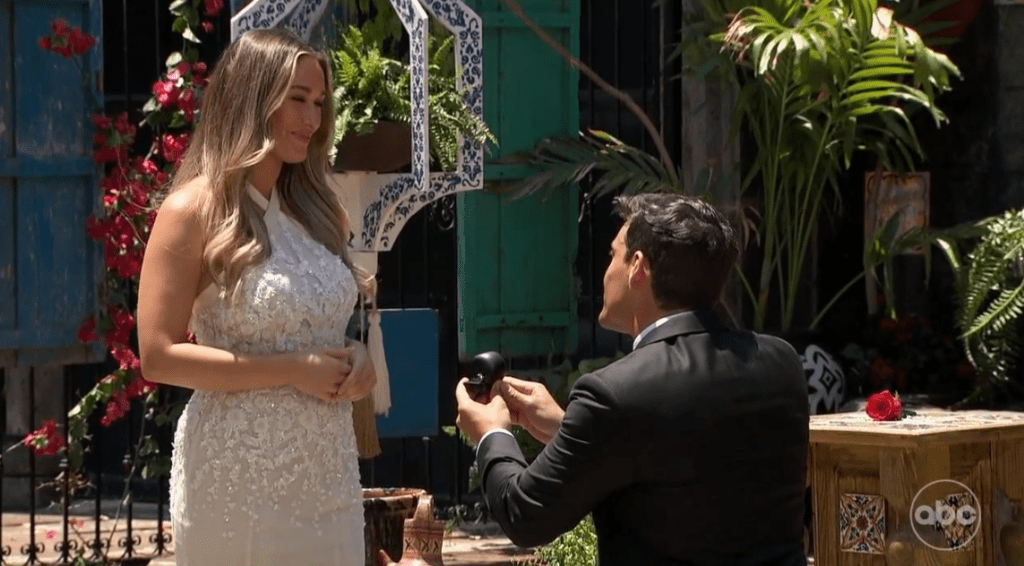 By “proposed” I mean he got down on one knee and recited some Hallmark card platitudes in a monotone voice.

Rachel accepted  Tino’s promises of “forever” as tears fell down her cheeks. 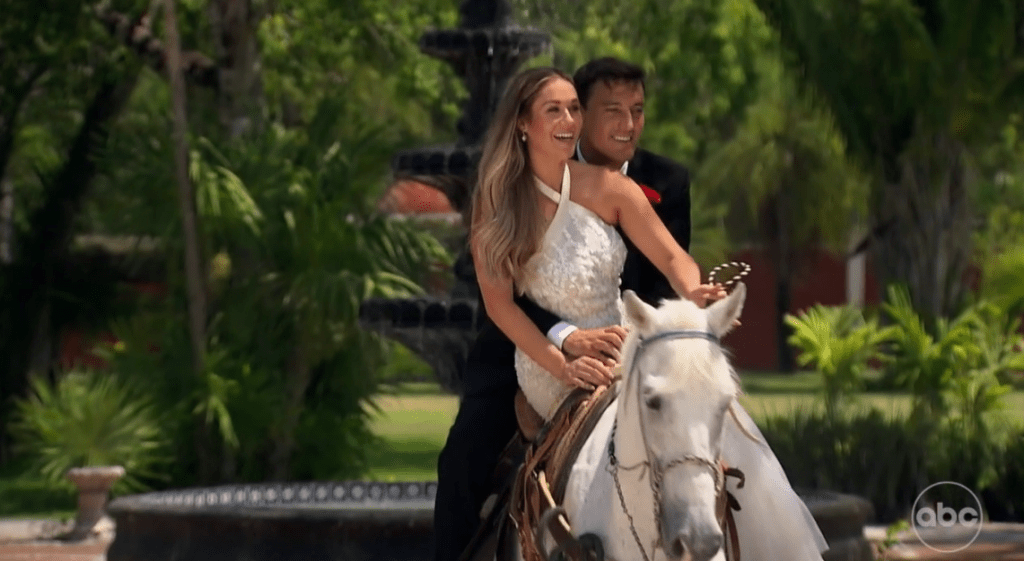 Then, to really rub it in, they rode off into the sunset on a literal white horse.

Then things got ugly

Back in the studio, Jesse was like, “Hey Rachel, I know we just made you watch your proposal in front of all of us, why do you look so pissed off?”

So she told us that Tino cheated on her. 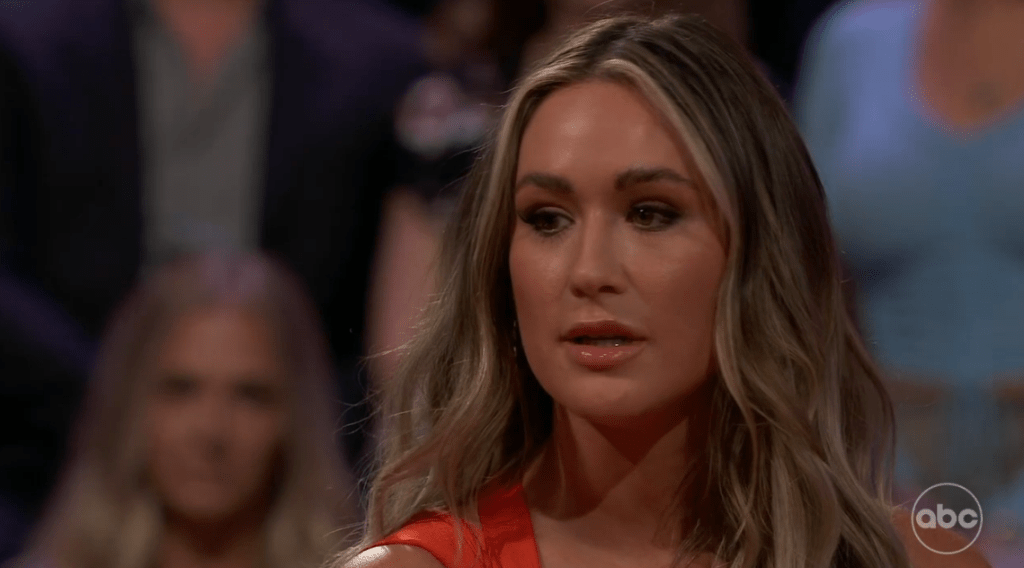 That sweaty boi had the audacity to kiss someone else weeks after the season premiere and thought he’d get away with it.

What did Ethan call him earlier in the season? Oh yeah, a baby back bitch.

Okay, so the story is that Rachel and Tino were in a rough patch around the time when the season premiered because this show sucks the life out of everyone in its path. 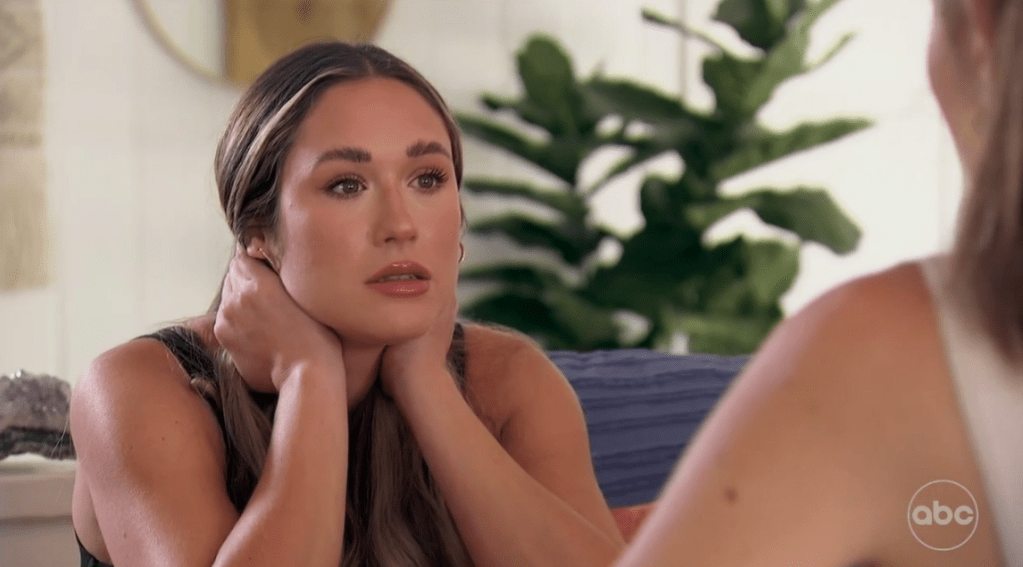 I have no doubt that Rachel was a hot mess during that time. She would have been on constant press calls, getting scrutiny from strangers, and showing up on my meme page daily.

Sadly, Tino is a child who couldn’t handle any adversity. So rather than stick by the woman he claimed to want forever, he met up with some girl he met before the show and kissed her.

Supposedly it happened one time and the moment he did it, he regretted it.

Of course, he didn’t regret it enough to, you know, confess immediately and beg forgiveness. Instead, he kept it a secret until Rachel pulled it out of him and then begged her not to tell anyone.

Good luck with that, BBB.

Soon we were seeing Rachel and Tino in a random house in LA where they were going to have it out once and for all, for our entertainment. 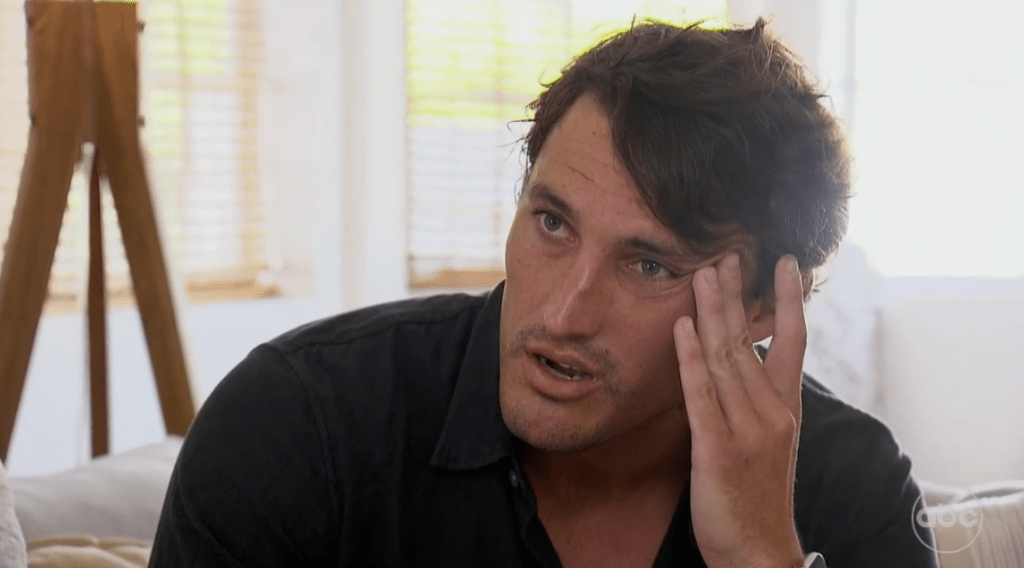 Tino brought his new combover, his anxiety, and a notebook of past quotes from Rachel that he felt validated his actions.

An actual notebook with quotes that made him feel better about cheating. He may as well have rolled out a CVS length receipt.

But, despite his desire to brush past this single indiscretion, every time Rachel pressed him on his answers he would walk out of the room, cover or remove his mic, and make furtive phone calls to someone who I can only hope was his lawyer. 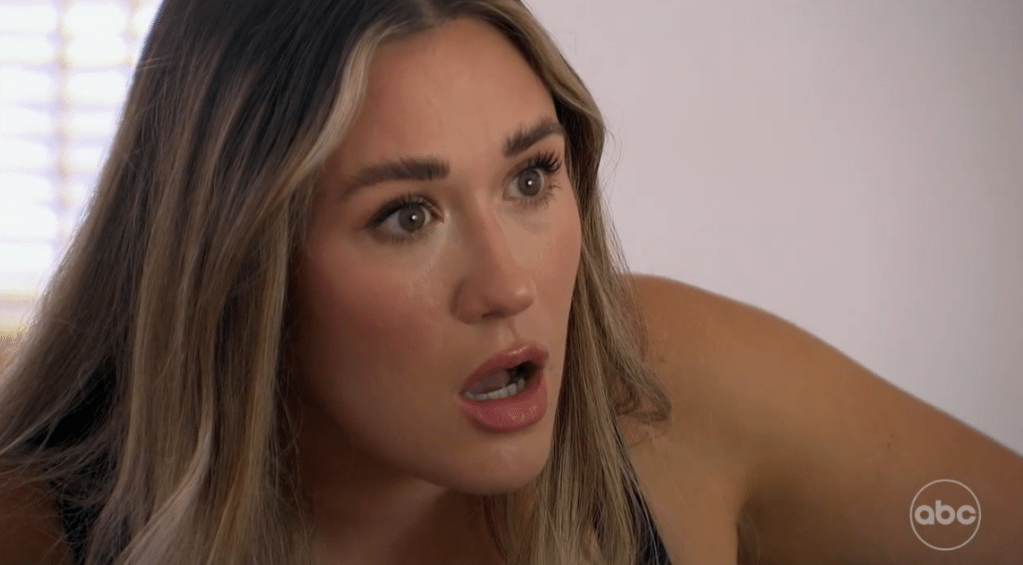 In the end, Tino tried to convince Rachel that they could make it work, but Rachel removed her ring and told him that it was over.

I think it might have been the first time I liked her all season. 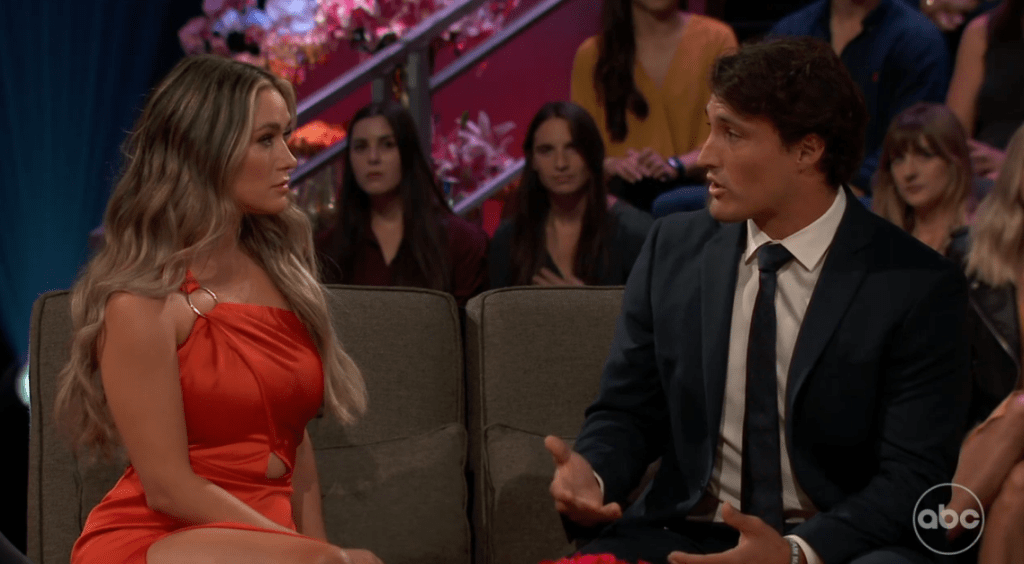 Months later, and back in the live studio, it was time for Tino to join a fuming Rachel on the stage for his public beating.

At first, Tino started out okay. He walked in with his sweaty yet fluffy hair as the audience booed him and took immediate responsibility for his actions.

He apologized and appeared ready to put it all behind him.

Lol, better luck next time, buddy. This is Rachel we are talking about. 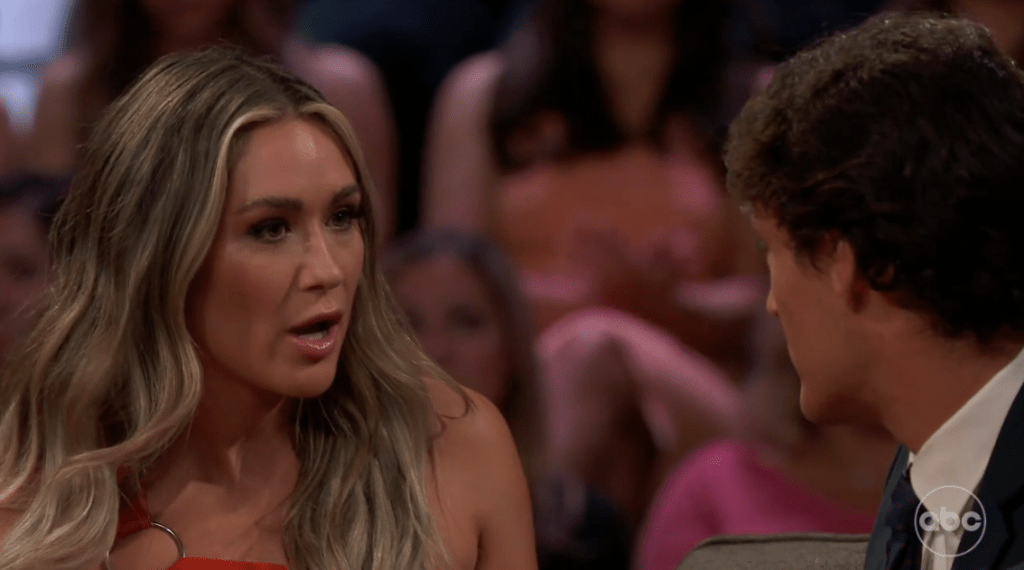 She interrupted him at every turn, dissected his every word, and overall treated him with disdain.

Tino deserved everything he was getting, but every few sentences Rachel would say something that hinted at her old reputation of only wanting to look good on camera.

Do I think we got the whole story about the demise of their relationship? Also, no.

But who cares because this is The Bachelorette not Tino’s redemption tour.

At this point, I was ready to put them both out of their misery. Tino was the bad guy. Rachel was the woman scorned. We get it. 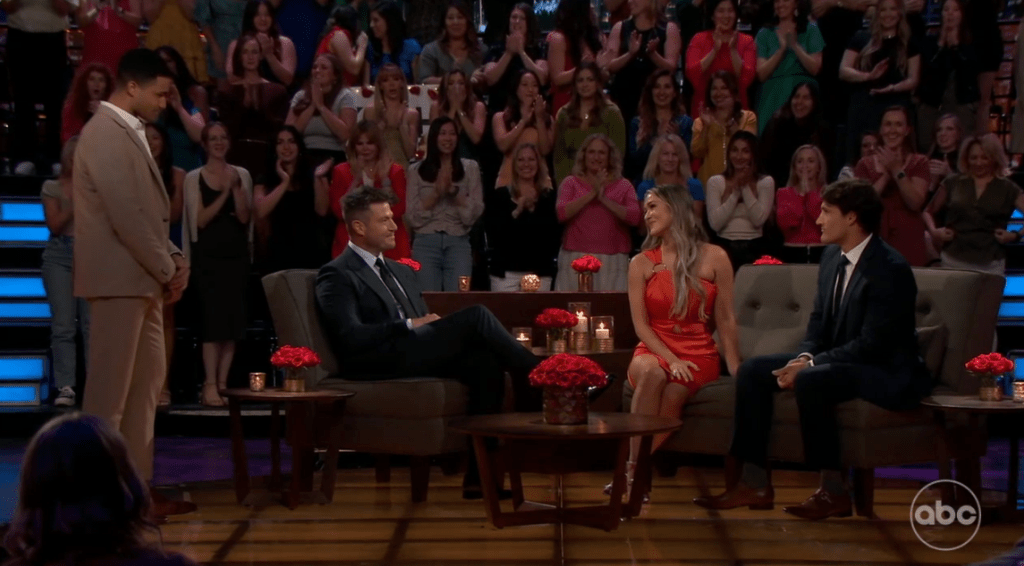 Wait, what was that?

At that moment, Aven (yes, the man she dumped for Tino just last week) walked out from backstage and asked Rachel out on a date. They left the stage holding hands while Tino stood there looking even more stupid than usual.

It was cruel even by Bachelorette standards.

Jesse Palmer looked like he was going to orgasm.

Gabby and Erich try to turn this ship around 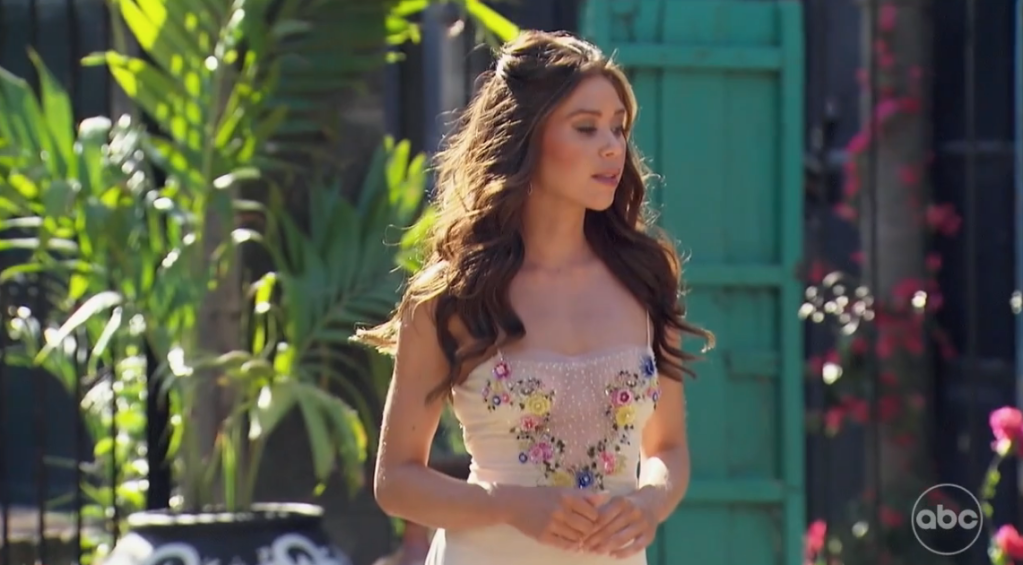 Rachel might have been off pretending to still like Aven, but as far as we were concerned Gabby was in Mexico in a beaded gown waiting to get engaged.

I’m getting whiplash. Please never give us two Bachelorettes again.

Okay, the music was swelling, the peacock was cawing and Erich walked up to Gabby with his well-coifed mullet and a huge oval-cut diamond to tell Gabby that she is his soulmate. 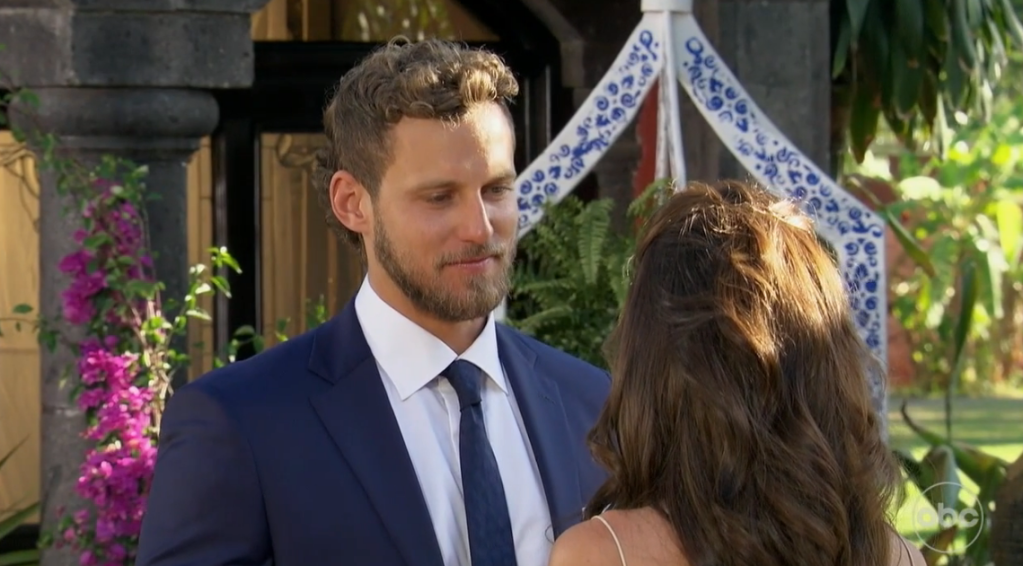 She told him that he broke down her walls and made her love herself before she even fell in love with him.

Then he got down on one knee and asked her to be his wife. 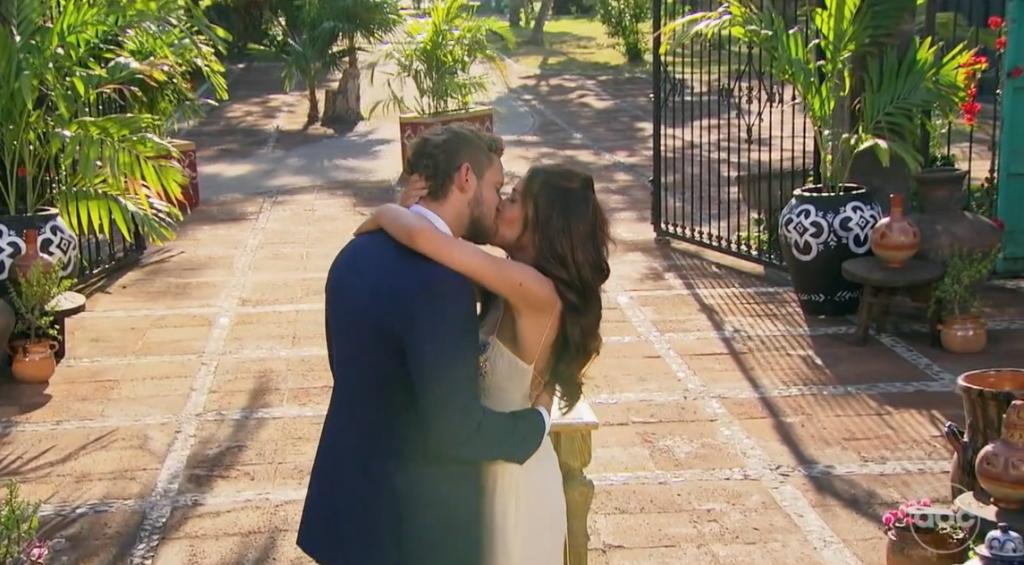 She said yes, and they rode off on a motorcycle together.

This used to be the best part of every season, but they turned it into a sidenote instead.

Now, what about those rumors?

Yet again we were back in the studio where Gabby and Erich are still happily in love. Thank God, I couldn’t take another drama-filled hour.

Just kidding, Jesse was salivating over some old texts Erich sent to some girl before the season aired. 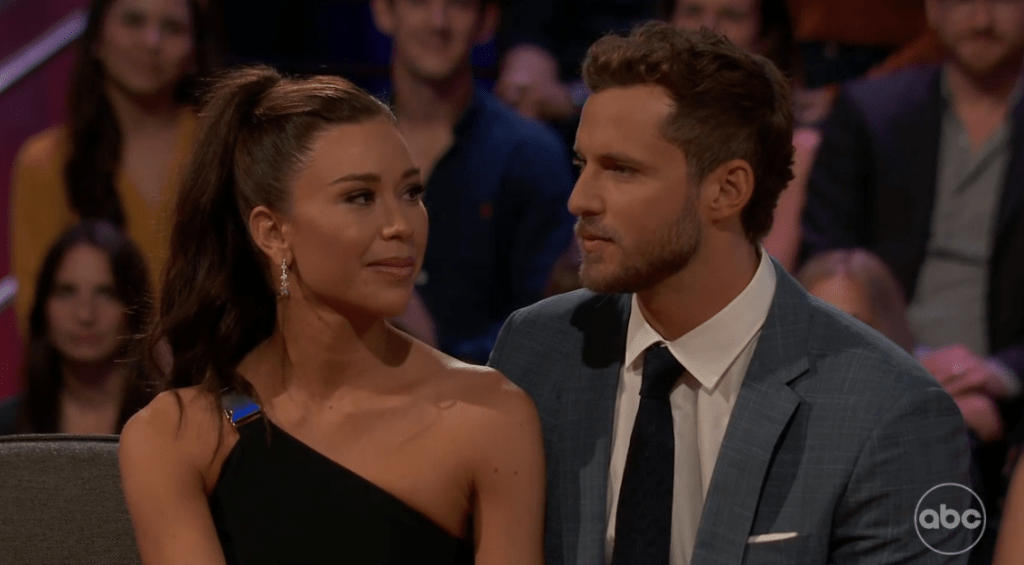 So the drama there is that Erich was casually dating a woman before he left for the season. He told her in the texts that the show isn’t real, but he still wanted to go and try something new. Then he texted her after the show aired to apologize for how he treated her.

This is the biggest waste of my time.

Erich apologized. Gabby called him an asshole. Neither of them cared about this drama at all. 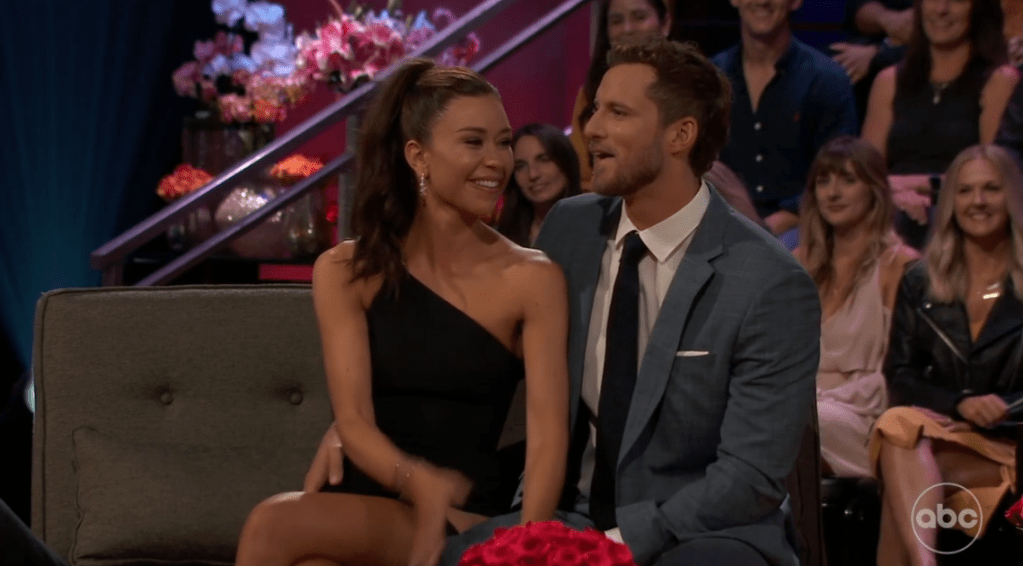 Suspiciously (or not if you know anything about this franchise), there’s one more scandal that Jesse Palmer chose not to air despite the way he has been happy to talk about everything else.

There’s a picture of Erich from his high school yearbook in which he’s in blackface.

Yep, you read that right.

He apologized for his past actions on his Instagram page a few weeks back with the ubiquitous black box of feigned white guilt, but it didn’t escape my notice that Jesse and the show didn’t touch that “scandal” with a ten-foot pole.

Is anyone surprised? Because I’m not.

Neither was former bachelorette Becca Kufrin who ended Gabby and Erich’s interview by advising them to make sure they have the same morals and values.

The shade was thick and appreciated.

You’re telling me this episode wasn’t over yet?

I looked at the clock as the episode was winding down and there was still nearly an hour to go.

What the hell were we going to talk about now?

Oh, no, don’t say the rumors were true. 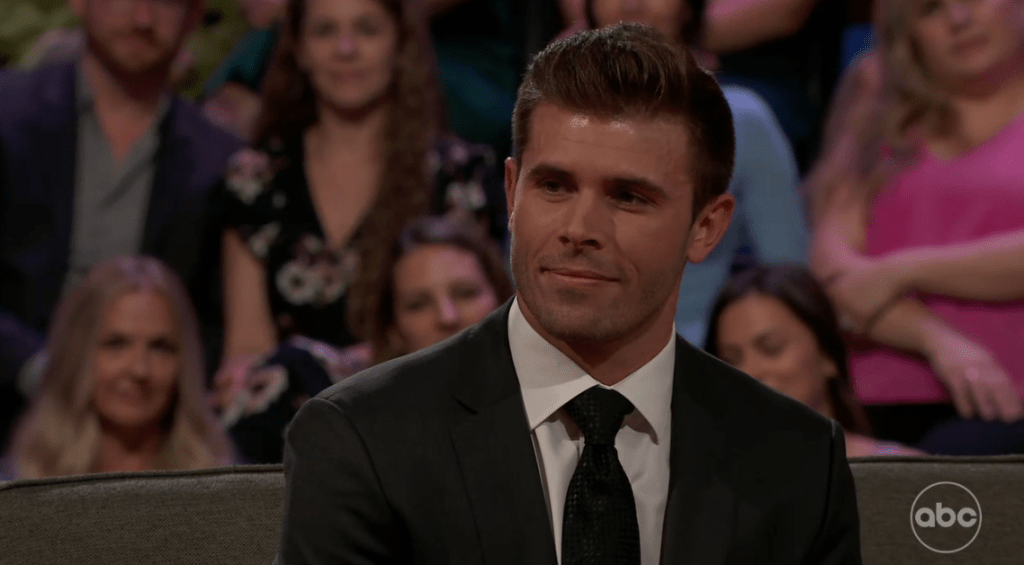 Zach Shallcross is the next Bachelor.

Jesse Palmer expressed how excited he was to finally not have a bachelor who looks like him and I was confused.

Uh…he’s an average-looking white man who middle America will love. You are the same.

It doesn’t matter because we all know I’m watching this mess no matter what. Can I go to bed now?

Nope, because his journey starts NOW.

Suddenly production was wheeling out a background image of the bachelor mansion and Zach was preparing to meet the first of five women from his season. 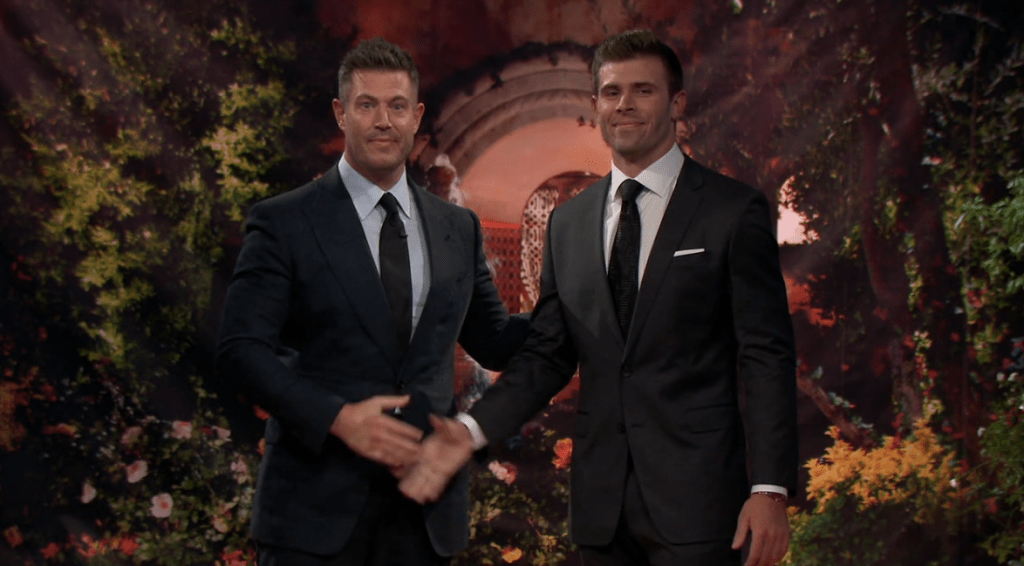 My secondhand embarrassment was so thick that I was watching through my fingers.

I get that Zach is new to this and that it was sprung on him, but he was awkward, couldn’t remember any of their names, and generally made me uncomfortable.

The big twist here was that “Bachelor Nation” or at least whoever was watching live on the East Coast and had a Twitter account got to vote on who got the first impression rose. 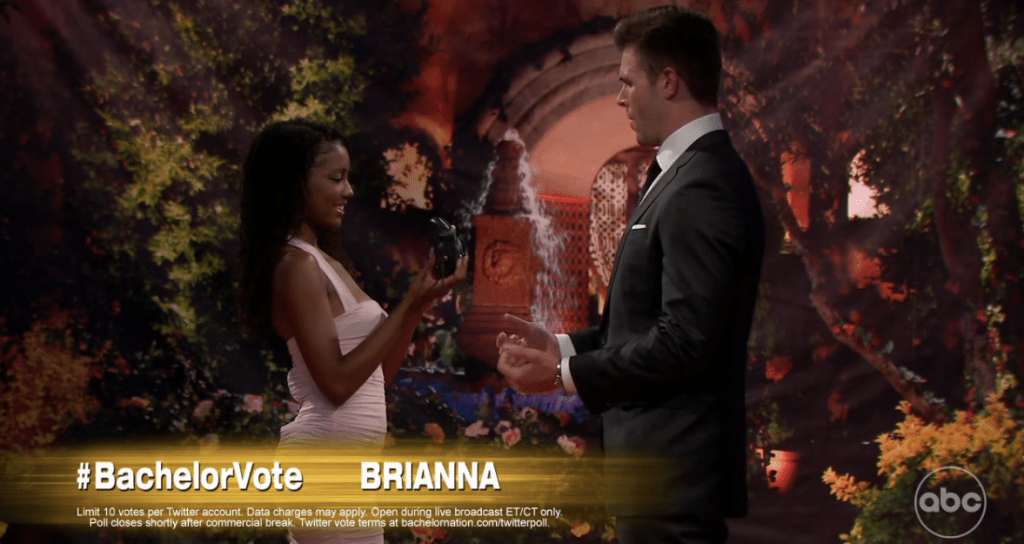 It went to a gorgeous Black woman named Brianna who I am begging to run for her life.

And with that, this shitshow of a season is over.

Rachel is single and supposedly off with Aven.

Gabby is on Dancing with the Stars and is still engaged to Erich.

Zach is our Bachelor.

I need a vacation.

JK, Bachelor in Paradise starts Tuesday. See you there.