I first heard of Instagram influencer Turtle Creek Lane at the start of the pandemic. I’m 99.9% sure Chloe Fineman recommended it without comment. After one perusal, it was clear Turtle Creek Lane was a bonkers follow, adding a little “Did I accidentally snort cocaine?” fun to the quarantine blues. But now I’m thinking Chloe wasn’t so much spreading joy, but rather, she didn’t want to be the lone witness to this evil.

Turtle Creek Lane is Jen Houghton, a housewife/designer, living her best life in the upscale Dallas area of Highland Park/University Park. Her schtick is decorating her mansion in over-the-top themes for holidays, baby showers, and National Nacho Day. Imagine your mother decorating the house for Easter, right after she won a $5,000 HomeGoods gift card and snorted all of the available Adderall in Westport, Connecticut. This the vibe of Turtle Creek Lane.

All of Jen’s design choices are a feast for the eyes, in a Bird Box kind of way. Her cartoonish palette boggles my mind. How can the colors be so oversaturated and yet so thin at the same time? It’s like the Kat McPhee of décor. I am big enough to say her taste is not my taste. Some might argue it’s no taste at all, but I am willing to let people like what they like.

So Grateful to Be Rich and White in Texas

Jen starts each day’s Insta story roll with the mantra, “Let’s pause, take five seconds, submit something we’re grateful for, because happiness begins gratitude.” I think happiness begins with having every single one of your material needs met, but I’m simple like that.

TCL documents Jen’s and her machinations as she installs fake flowers on top of AstroTurf or as she decorates the spaces and/or homes for one of her six children. She’s an influencer so everything is for sale. Every post has a “swipe up” link for discount codes or links to dupes for the more expensive stuff she wears. She has big time sponsors, from Lowe’s to Macy’s. Capitalism and consumerism have a home on Turtle Creek Lane.

This big haired woman in the high-waisted jeans seems perfectly sweet. She will pray you while she sells you her teeth whitener. She wants the world to be her version of pretty. She loves the sinner but hates the sin. There has always been this undercurrent of evil to her — luring you into the oven, like the witch in Hansel and Gretel –, but I ignored it because this is a pandemic and I’m all caught up on every episode of The Real Housewives of Salt Lake City.

But then I started to waver on the Turtle family as more problematic stuff popped up. They have a weird relationship with food — no refined carbs ever! — that sounds super restrictive, pinging my eating disorder alarms bells.

She and a daughter would make last minute runs to Hobby Lobby, when she ran out of oversized silk roses. Jen has six children, so we know — like Hobby Lobby — she has no relationship with birth control. Her consumption of cheap shit from China cannot be sated. I don’t care how many storage bins she has; Team Land Fill is licking its chops at the behavior she encourages.

Then, during the height of the pandemic, she and the mister gleefully hopped on a plane and went to a fancy wedding in Las Vegas. Part of being a good Christian is setting a good example, and I guess Jesus loves the Bellagio Water Show (Mathew 9:23-36).

When The Pipes Burst

In late February, an artic blast passed through Texas, killing the state’s power grid and leaving millions to suffer in the freezing temps as pipes burst, filling homes with water, ruining possessions and lives. The Houghton family was not spared this tragedy, but Jen’s Insta response to it is how I went from uneasy “Agnes next door” dread to outright hating her.

As the Turtles dealt with burst pipes in the second large home on their property — yes, second –, Jen gleefully interacted with plumbers she could easily afford. This was no “laugh until you cry vibe.” Instead, it was a tone-deaf story line to shake up her usual content. Everyone loves a plot twist! Everyone loves to play “Where in the worlds is the water valve for this rich lady’s supplemental lakefront home?” 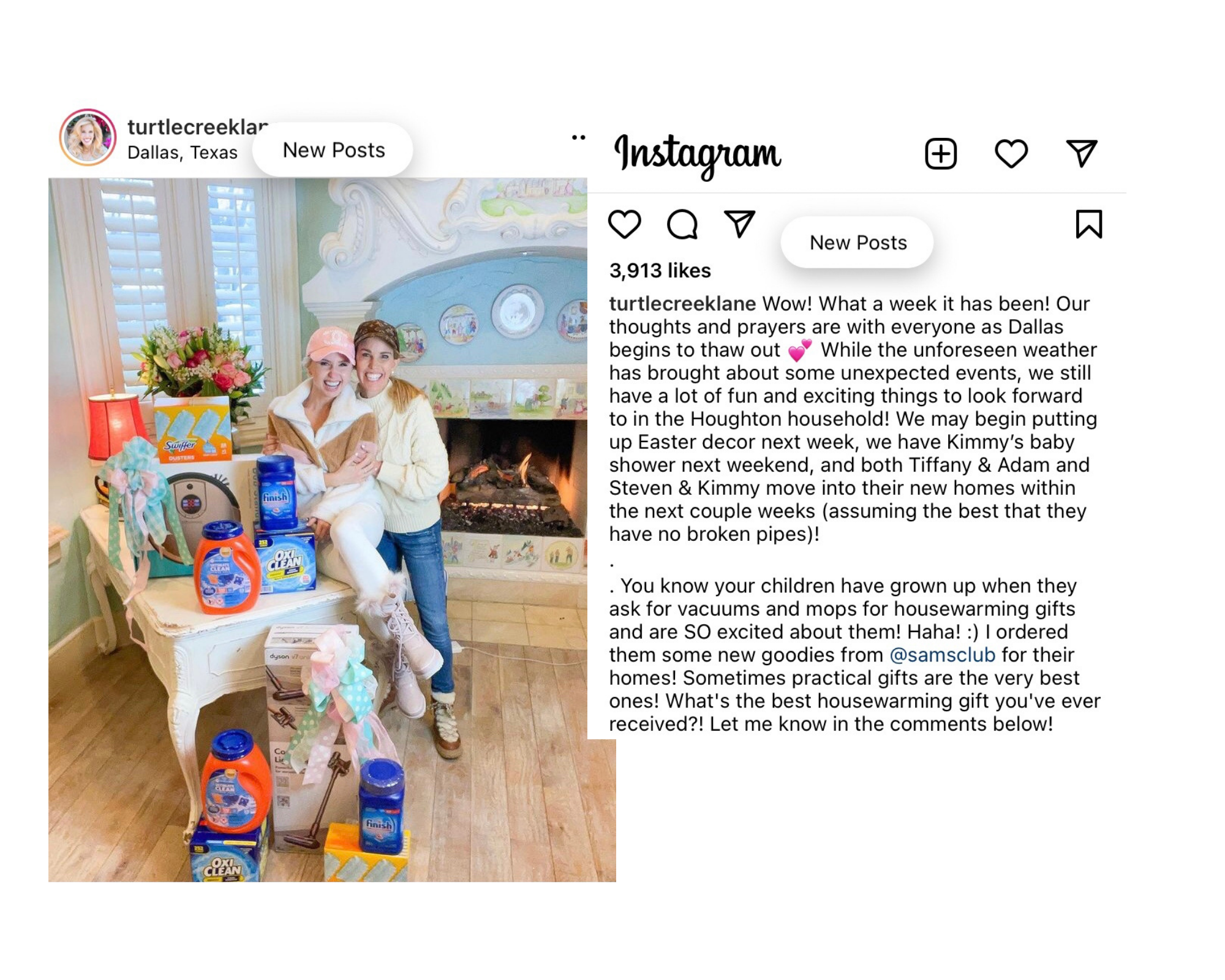 As people literally died in the freezing temps, Jen used the downtime to post sponcon from OxiClean, Finish, Swifter, and more, via Sam’s Club. She then announced a $1,000 giveaway to her followers. She could have donated $1,000 directly to someone in need and encouraged her thousands of followers to “stop, take five seconds and donate to the Union Gospel Mission Of Dallas,” but no. Capitalism > caring. When fellow Texan Joel Osteen does more in a local disaster response, it’s time look inward.

On March 2, Governor-cum-yokel Greg Abbot fully re-opened Texas 100% and removed mask mandates, to the horror of health officials and decent people. How did Jen react? She loved it, quoting Hamilton’s King George. “Awesome. Wow.” Someone tell this lady it’s hard to sell personalized vitamins to dead people. But on the other hands, it’s hard to sell teeth creams if there is a mask over your incisors. 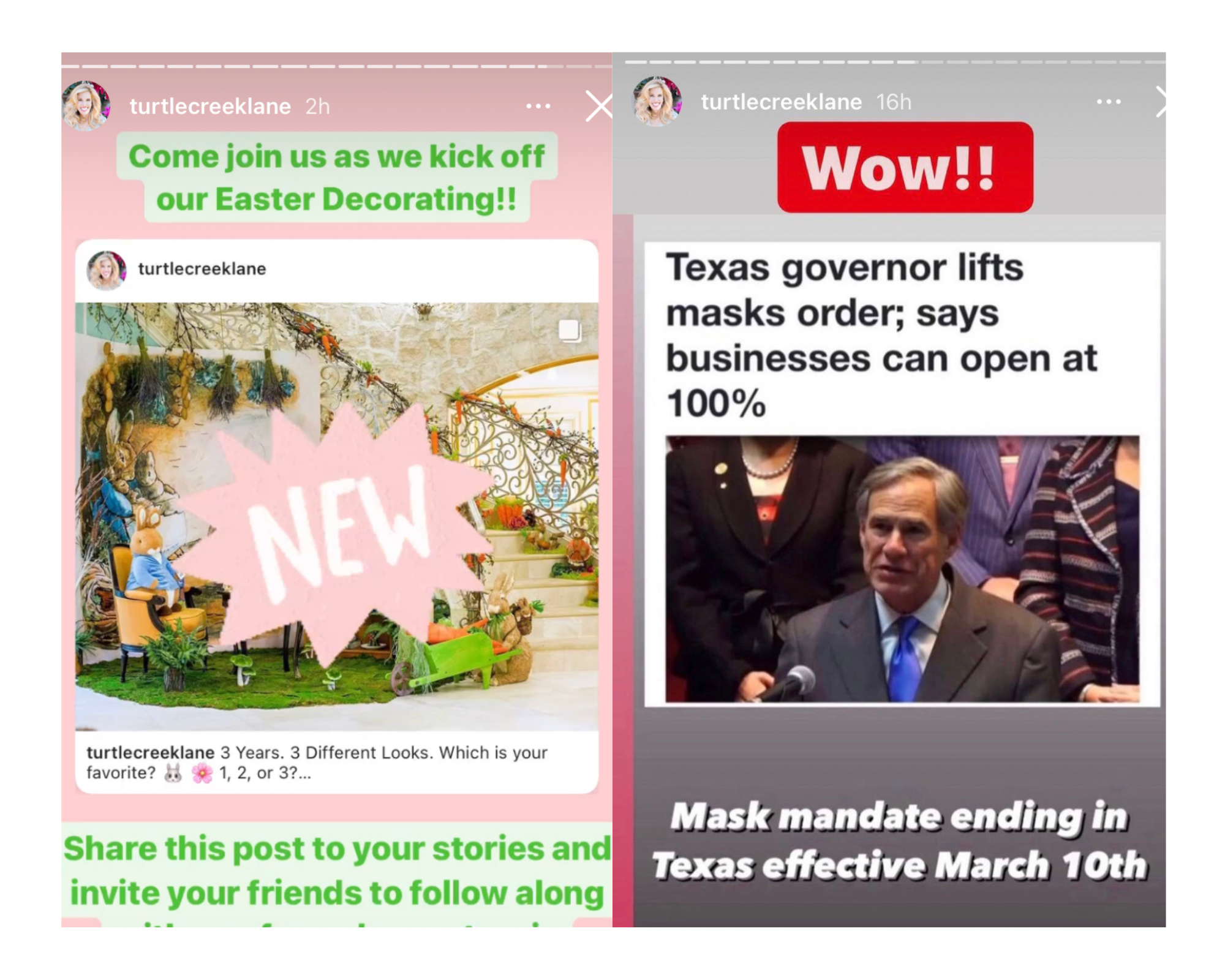 Jen calls Turtle Creek “the most positive place on Instagram,” which is some NARS Orgasm lipstick-on-a-pig realness. When your family maxes out on donations to thief/wastrel/science denier/sexual abuser/racist Donald J Trump and his MAGA PAC, I feel a lot of things, but positivity is not one of them. In this house, we live, laugh, support the QAnon Shaman.

So, thanks, I hate it. The Benjamin Moore Light Blue 2066-70 covering her two story living room cannot hide the rot in the foundation. On a scale of 1 to Kyrsten Sinema, how much does this Turtle lady suck right now?

If you have the ability, consider donating to one of the charities listed here, to help support Texans in needs.

Photo by ROMAN ODINTSOV from Pexels

The Cool Table@thecool_table
1.0K Following 1.0K Followers
@jamiesrule @jamadoria @coolstorymere I know you know this, but I"ve had pixie cuts off and on since 1997 and m*n h… https://t.co/VsXyyN7PpC
1 hour ago
4
@LSULeslie @schizoreads I’ve legit never even heard of this
1 hour ago
@chels__ebooks Yes! Josh O’Connor supremacy! I watched this right after I got obsessed with The Durrells ❤️❤️❤️
1 hour ago
@maria_gb75 Keep him
1 hour ago
@baskinsuns AGREED. I love love loved that as a kid (and vowed to be able to do it so someone would love me)
1 hour ago
1
Archives
Entertainment, Outlander, TV

Paul Feig and Quarantine Cocktail are Saving Your Sanity