I love tennis very much. My obituary needs to include three things: a picture of me looking hot in my 30s, Celine Dion lyrics, my USTA tennis ranking and record. Tennis is a sport for life. Until you die.

But tennis is under pressure from a new fad, though new might be the wrong word since the people bringing us this nuisance all qualify for Medicare.

This nuisance is pickleball.

You might have seen people playing pickleball in your town. You have certainly heard them playing since pickleball involves a hard paddle smacking a hard, wiffle ball. Imagine a stoned woodpecker going to town on a plastic pipe. Thwack thwack thwack. That’s the dulcet tones of pickleball.

I don’t care if people want to try something new for exercise. If The Villages wants to add pickleball courts to their marketing material, good for them. Moving six inches, side to side, has some health benefits. Don’t get pickleball mania FOMO! Buy equipment with money withdrawn from your Fidelity 401K without penalty.

My complaint is this: the upswing in retirees wanting to play pickleball should not come at the expense of another sport. I’m the resident pickleball grump, and while it might seem like low-stakes anger, taking over public tennis courts for pickleball points to a larger problem: older, white people feel entitled to space not meant for them. And they take it.

Pickleball is a parasite

I live in Newport, Rhode Island, home of the International Tennis Hall of Fame. Tennis is a big deal here, and yet we aren’t immune to the thwack thwack thwack. The city converted one of the public tennis courts to three pickleball courts and then painted distracting pickleball lines on five other tennis courts.

That meant an immediate reduction of access to tennis. You can play pickleball on a tennis court, but not vice versa.

Pickleball isn’t tennis. Tennis is a ballet that uses a racquet with strings, moving a fuzz-covered rubber ball 78 feet, baseline to baseline. It’s graceful and lovely. Now, with pickleball, you could make your own equipment using a cheeseboard, an old fishing net, and a walnut you found in the yard. It’s cornpone and awkward.

The nets used in pickleball are shorter than tennis nets, so Peggy and Burt futz with the tennis straps when they take over a court, putting strain on the equipment and not returning things the way they found them. The hard balls damage the court surface. It’s why towns usually ask you to not rollerblade on tennis courts.

Pickleballers congregate and don’t respect time limits when folks are waiting because they believe in something called “open pickleball.” No wonder the highest rates of STD growth is also with the age group who love pickleball. They are so open! Causation or correlation?

And not only do they demand space — physical and aural –, they also want to appropriate public funds to expand their hobby. Our local children need basketball courts and a skate park, but the pickelabllers want to jump the money line even though you can literally play pickleball in a parking lot. All you need is some chalk, a portable net, and three friends you met at the Republican National Convention Golden Oldies mixer.

Last month, the city of Newport had to crack down on the pickelabllers because their exclusive courts are in a densely populated historic neighborhood, i.e. a part of town with a neighborhood association. White people fighting! The city restricted the court hours and added new rules like “no alcohol,” “no music,” “no chairs,” and “please don’t block driveways when parking.”

If you need music, seating, and booze to enjoy your sport, admit your sport is belongs in a bar. You are playing ping pong with a bigger ball. The bigger ball is key since the eyes go as we age.

And the final straw is pickleball showing up in my safe space, i.e. Bravo TV. In the last week, pickleball — being played terribly! — has appeared on both Real Housewives of Beverly Hills and Vanderpump Rules. 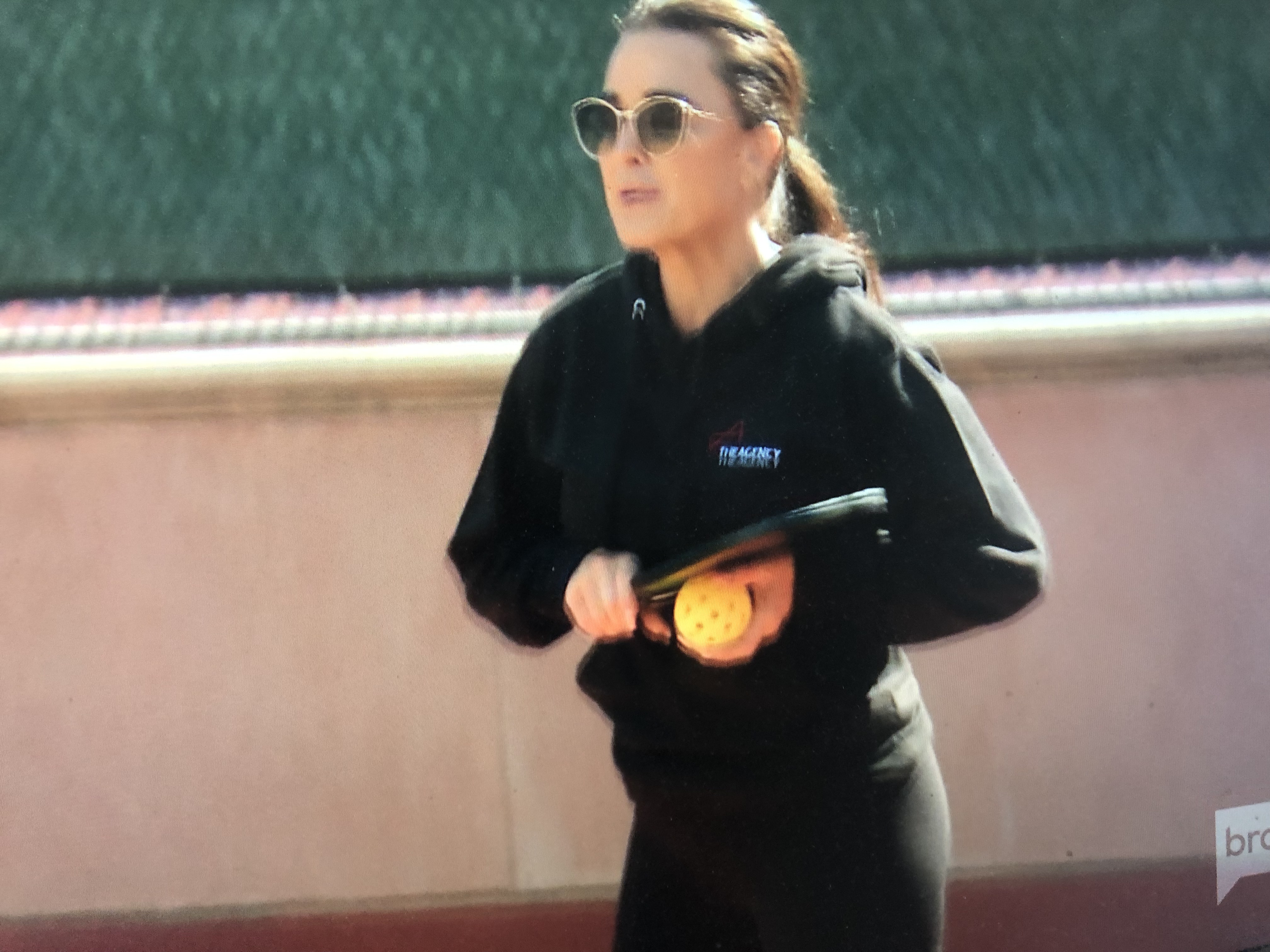 (Yes this is a screen shot I took with my phone. Streaming services that block the Print Screen function strike again!)

I’ll let the grande dame of Bravo recaps, Brian Moylan, sum up my feelings on that:

Even Kyle gets in on criticizing Erika in the confessional. When the two go to play pickleball, a gym-class game that should come with a mandatory vasectomy for every adult male who plays it, Erika tells Kyle that when the divorce is finalized, she’ll walk away with nothing and that she told her lawyer she expects nothing. Kyle says, “Well, the most important thing is that the victims get their money.” Yes, she is right.

God bless! I could not have said it better.

The premier issue of In Pickleball magazine (!) has a story that details “how pickleball conquered a nation.” Conquered. Sounds about white.

The Cool Table Has a Podcast Now!@thecool_table
999 Following 987 Followers
Bingerton By Episode: Bridgerton 207, Oceans Apart https://t.co/sXXD4Zykr4
2 days ago
Is that you waiting for #Bingerton to start? I see you. OH, that's me. ANYWAY, we will be live talking #Bridgerton… https://t.co/xaB42Ta31S
2 days ago
4
RT @YTCShepard: That moment in an author’s first historical or paranormal romance novel when the hero introduces himself and is like, “I’m…
2 days ago
397
@santasmbslt Yes! In 20
2 days ago
@LSULeslie Let him watch Marley and Me
3 days ago
2
Archives
Entertainment, The Bachelor, TV

The U.S. Open Ladies’ Final Was an Indictment of the U.S. Itself