All the Spring Romance Books to Add to Your TBR List

Take John Green and Nina LaCour and mix with a little smidge of sweet tea-flavored southern religious trauma, and you’ll get the newest novel from runaway best-seller, Casey McQuiston, I Kissed Shara Wheeler.

McQuiston is a giant in the sweet and funny LGBTQ rom-coms, and her debut, Red, White and Royal Blue was a massive hit and one of my favorite contemporary romances of the last few years. But I wasn’t sure I was ready for young adult novel of the same ilk with a dash of … well, my own high school experience. Turns out, 24 years out of a toxic private Christian segregation academy is just enough time to process it again on the page.

Chloe Green is so close to winning. After her moms moved her from SoCal to Alabama for high school, she’s spent the past four years dodging gossipy classmates and a puritanical administration at Willowgrove Christian Academy. The thing that’s kept her going: winning valedictorian. Her only rival: prom queen Shara Wheeler, the principal’s perfect progeny.

But a month before graduation, Shara kisses Chloe and vanishes. 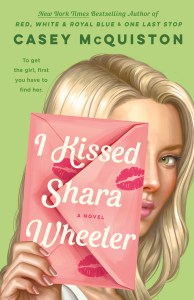 On a furious hunt for answers, Chloe discovers she’s not the only one Shara kissed. There’s also Smith, Shara’s longtime quarterback sweetheart, and Rory, Shara’s bad boy neighbor with a crush. The three have nothing in common except Shara and the annoyingly cryptic notes she left behind, but together they must untangle Shara’s trail of clues and find her. It’ll be worth it, if Chloe can drag Shara back before graduation to beat her fair-and-square.

Thrown into an unlikely alliance, chasing a ghost through parties, break-ins, puzzles, and secrets revealed on monogrammed stationery, Chloe starts to suspect there might be more to this small town than she thought. And maybe—probably not, but maybe—more to Shara, too.

I don’t know if you could set a book like this one in 1998 and have such great representation and honest exploration of friendship and freedom. But set it there, and I am Chloe Green. And reading her story and Shara’s was a bit like therapy, understanding all the ways that imperfect, overachieving girls are just as deserving of the good things that come their way, even when that is occasionally comeuppance.

I rooted for Chloe. I railed against Chloe. I hated Shara. I hurt for Shara. These girls, and the rest of the kids at Willowgrove High School were imperfect in the ways that all of us can be: in the ways that have you remembering things you did and said in English class or the cast party or the senior skip day with visceral embarrassment or shame. But they are us in the same way that we have grace for who we were and what we were meant to learn through the chaos.

This is a 42-year-old Xennial mother of Zoomers’ review of I Kissed Shara Wheeler. If I asked my teenage daughters to read it and tell me what they think, I might get an answer like, “I can’t stand when books are, like, supposed to be about today. But it was cool.” And they would sound exactly like Chloe.

Thanks to Macmillan Audio, Wednesday Books and NetGalley for the audiobook review copy.

The Cool Table@thecool_table
1.0K Following 1.0K Followers
RT @meg_eh: About 3/4 of the way through this and it is resonating hard. It’s accurately described with how I’ve felt growing out of faith…
2 days ago
1
@meg_eh Thank you, Megan. We’re so glad it’s resonating. ❤️
2 days ago
1
@BeaDeeH Always been how I prefer it
3 days ago
1
February New Release Books https://t.co/B5jC2dDJhV
3 days ago
3
@hannaearnest I love love loved this book and am talking it up to everyone. Looking forward to the end of the Harpe… https://t.co/lKeIX6a820
3 days ago
2
Archives
Bridgerton, Entertainment, Netflix

All the Spring Romance Books to Add to Your TBR List