Pseudonyms are a long, time-honored tradition that goes back to, well, the Gospels. In popular and contemporary fiction, they serve as anonymizers for authors who would like to try something new, who don’t necessarily want to trade on their popularity or who want to distinguish their work in one genre from that of another.

The reasons are their own, and in the tradition of famous pseudonymous authors like Elena Ferrante, it is unfair and unwise to try to unmask an author who has chosen anonymity. Such is the case with the newest pseudonym to hit publication, Rebecca Morrow, a NYT best-selling author who anonymously published, Corinne, a novel about a woman who leaves religious fundamentalism, just last month. 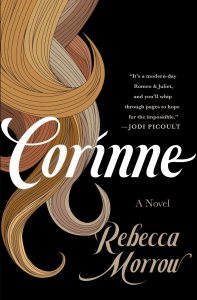 You want to walk away from the things that are bad for you and never look back. That’s what Corinne Callahan wants.

Cast out of the fundamentalist church she was raised in and cut off from her family, Corinne builds a new life for herself. A good one. But she never stops missing the life–and the love — she’s left behind.

It’s Enoch Miller who ruins everything for her. It was always Enoch Miller. She’ll never get him out from under her skin.

Set over fifteen years and told with astonishing intimacy, Rebecca Morrow’s Corinne is the story of a woman who risks everything she’s built for the one man she can never have.

I hadn’t heard of the novel until a reddit post speculating that the anonymous author was actually Stephenie Meyer came across my social feeds. My Cullen-tracking senses immediately went up.

The case itself is pretty flimsy: the book is about leaving religious fundamentalism, and Stephenie Meyer is practicing LDS. But the novel’s church is very-non-LDS; it feels like a generic Jehovah’s Witness and Seventh Day Adventist mashup. It’s unrecognizable as a specific denomination, but has hallmarks of many. Another point in the case for Meyer: it’s about love, a seemingly tragic love story. So are lots of books. And finally: the main love interest has hair. Mahogany hair. Burnt sienna crayon hair. That Corinne loves to talk about. I mean, they almost got me with one.

Sleuthing out whether or not STEPHENIE MEYER secretly wrote a new novel is the most serotonin I could ever ask for. It’s been A LONG time since I took comparative lit (and I don’t want to hear a single chagrinned word about her books not making the cut for a class like that), and comparing a new novel to Midnight Sun is my own personal brand of heroin.

Because as ill-advised as unmasking a pseudonymous author can be, the set-up for me was too good. ANONYMOUS AUTHOR WRITES NEW BOOK TO FLEE THE FUNDIES!!! So very my jam.

I simply cannot pass up that this author is potentially one we know very well who chose to be anonymous because the subject matter of that book was too scandalous or too close to home to put name to. It’s attempting to solve a puzzle while reading a (potentially good and very much in my wheelhouse kind of) book: double entertainment!

I will say here for the record: I had no intention of truly unmasking who wrote this novel. Without the publisher or author themselves coming forward there is no chance of that anyway, but I would never condone taking away the agency of someone who has chosen anonymity for themselves. If an author, like Stephenie Meyer, wanted to write this book and needed to remain anonymous to remain safe, I fully respect that. Hell, I respect the pseudonym for whatever reason the author chose. This was just a bit of fun. And bonus for whoever the author really is: the internet chatter that this search garnered really jacked up sales.

And so, I read it. And in less than 24 hours because it was actually that good. And did I get Meyer-vibes from it? No. Just a few pages in, and I could tell it didn’t feel like the Meyer I know so well. I go into detail on my TikTok (which you should follow).

So Who Could Rebecca Morrow Be?

The other options have eluded me honestly. A lot of them are authors I simply haven’t read. And if I haven’t read them, I can’t make a call, but I do have better theories than SMeyer.

Shannon Hale seemed to be cheekily miffed that she was included in the running (or at least that Book Riot thought she might be in her 50s). I know nothing about Adrienne Young (although I did accidentally purchase two copies of Sky in the Deep). And I’ve never read Elin Hilderbrand.

But Rainbow Rowell? While there is internet-folklore that she’s Mormon, I hadn’t heard that until her name came up as a potential author of Corinne, and I can’t find anything online to prove it. But I do have copies of her adult books, Attachments and Landline, and I gotta say: literarily, I can see it. Like, REALLY see it. Her dialogue (and even the thematic underpinning of Landline) really matches Corinne.

I can also understand why an author who has been touted online as problematic (mostly for her depiction of her Korean-American character, Park, in Eleanor & Park) would want to write anonymously. I can see a lot of prolific and talented authors who have found themselves embroiled in this kind of discourse doing this in the future.

However, I think the strongest case I’ve seen online – for amateur sleuthing at least – goes to Elin Hilderbrand. Again, I have no idea because I’ve never read her books. However, reddit user belle7117 gave a great case for her authorship. I was especially impressed that the redditor knew that Hilderbrand had written this online story with a character named Corinne who has the same hair as Morrow’s titular character. But I’d never say definitively without a lot more knowledge about her writing style.

So How is Corinne?

If you want to know what I thought of the book, I go in to a little detail in this video, but please follow me on Tiktok and watch the whole Corinne playlist for a full rundown of what I thought.

And no matter who the author is, we can all agree that any old internet jawing about who an anonymous author might be is great for book sales. Congratulations, Rebecca Morrow, whoever the hell you are.

Corinne is for sale now.

The Cool Table Has a Podcast Now!@thecool_table
1.0K Following 1.0K Followers
@JenReadsRomance Parenthetical.
1 hour ago
1
@MQBarber @wolflad78 Here’s my Henry https://t.co/sWnYKyRCc9
11 hours ago
4
RT @MQBarber: Brief pause in this morning's #amwriting session on the next Henry, Alice, and Jay book because a friend sent me this video b…
11 hours ago
2
@MQBarber 🥰🥰🥰 what can I say? I like having a Henry in the house. 🥰🥰🥰
11 hours ago
5
A fantasy league for #bachelorinparadise? Obviously. https://t.co/ffVM3XroDS
2 days ago
1 1
Archives
Entertainment, The Bachelor, TV