Nona the Ninth is hitting end-caps at B&N and Kindles today, and while this review won’t spoil it, I will let the whole world know that I know how it ends already.

And I’m still confused. The Locked Tomb series is infamously hard to unriddle, and Nona doesn’t bother to make that any easier, even while the narrative proves to be the easiest of the series so far.

Gideon the Ninth was a space-opera enema, straight up your insides without warning and leaving you washed out in the end. Helmed by an incomparable narrator who is the hook, the line and the sinker of the series, the titular Gideon tells the story of a cohort of elite necromancers chosen to riddle out the intricacies of rising to near immortal omnipotence in service of the Prince Undying, the Necrolord Prime, God. What unfolds is a murder mystery on a severe and remote pseudo-planet mansion that guts readers with a truncated love story that ends in sacrifice.

Harrow the Ninth was a liminally-spaced-out, free-bleeding wound of grief that didn’t heal throughout the entire novel and left you feeling weak and wondering if you’d ever recover. The narrator is so unreliable that she cannot be trusted to tell her own story, and first time readers spend the entire book trying to figure out what in the holy hell they are missing. But somewhere in the last act of Harrow, when Harrow herself takes a backseat for a good portion of the good stuff, the picture starts to coalesce into something we can see, something we can touch: an invective of dying rules and rules about dying, with an epilogue and a cliffhanger that you want to murder. 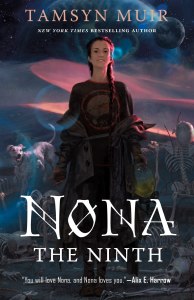 And here we come to Nona. This one is no enema, no open wound; it’s a coma. The novel works as an interlude, a dreamscape where the characters are the same, and never the same, where the story is recognizable but the rules have changed, the footing, slippery. Originally slated to be the first act in the final installment of The Locked Tomb, author Tamsyn Muir decided to give us a whole novel full of Nona, somehow the least decipherable narrator in a sea of unreliable narrators.

Nona is effectively an infant in Harrow’s body who is being taken care of by two-to-three important characters from the earlier novels while they are planet-side in a dirty and downtrodden city. With no recollection of who she is, or who her body is, the fundamental stakes of the book come down to readers figuring out who Nona is. This makes every mundane interaction, every personal quirk, every physical tick of Nona’s a hard fought clue into her identity, and that effort makes the reader grateful that the narrative is so straightforward.

Forget the elaborate world-building of Gideon the Ninth. Toss out the labyrinthine relationships of Harrow. Nona is simple. And there were times reading it where I wanted the complexity. Feeling like I was constantly missing something because I was missing nothing was like being subjected to Jod-level gaslighting. (And don’t even get me started on what his ass is doing in this novel. I see you, John.)

But the simplicity of Nona (the character) IS the greatest riddle of The Locked Tomb. Never before have we had a character so precious, so easy to love, so ingratiating. She bounds through her smallish world with eagerness and curiosity whilst knowing all the while that she might be the only one to unlock something wholly sinister.

Make no mistake. Readers will fall in love with Nona. But I guarantee that when they are done with her, they will desire Alecto all the more.

Go fall in love with her.

Thanks to Tor Publishing for the digital review copy of Nona the Ninth.