We spend an awful lot of time writing about the things we are obsessed with here at The Cool Table. And hey, if I’ve just spent 3 days listening to 12 episodes of a new podcast, or an entire spring break streaming a docu-series, or lost a week of my life re-binging A Discovery of Witches, then I can only do you, the good and loyal readers of this fine site, the true and honest service of telling you about it in squeals and gif format. That’s my solemn calling.

But sometimes an obsession goes beyond the temporary gratification of the moment, beyond the consumer hype of whatever thing is hottest right now. Sometimes my obsessions are too big to ever relegate to a sarcastic gif montage. Sometimes, my obsession is Queen Melina Marchetta, and I can’t do her justice.

It took me years to write a post solely about Melina Marchetta and her books, what they mean to me or why you should read them. (This post originally appeared in January 2016 at That’s Normal.) And I’ll be honest: it’s intimidating. I’m not sure I have the ability to put into words the profundity of her impact. The original title of this post was Melina Marchetta Writes Perfect Novels; Beth Fails to Write Mediocre Post About Them. Because, honesty.

But yesterday, Melina silently and without comment re-posted this episode from Australian television called The Italians, which highlighted and interviewed her as a famous Italian-Australian. I cried through the entire thing. Because I love her.

If you’ve never read any Marchetta books, I’m going to give you a short primer into why you need to stop right now and make them your first reads of 2021.

Marchetta’s first novel, Looking for Alibrandi, rose to huge critical acclaim, especially in Australia where it became a staple of literature curricula for public schools. It’s about family and females and finding your way as young woman. It has so many awards that it would be boring to list them all, but I will tell you that it won the title of “most stolen library book” which is freaking badass as hell. And still, it’s my least favorite of her books. Because she only gets better.

Saving Francesca is a young adult book that’s simply about people, about relationships, about family. Nothing flashy. No dystopia, no werewolves, no apocalypse. Just the quiet destruction of a young girl’s life as her mother starts to self-implode. There’s romance, there’s friendship, humor and heart. There’s cranky Will Trombal and Francesca’s obsession with him. And still, as good as it is, it’s not my favorite Marchetta novel.

When I picked up The Piper’s Son for the first time, I was sure that I was getting a satisfying sequel to Saving Francesca … the New Adult version of Will Trombal and Francesca’s life together. But what I got instead was a novel even more complex, about the characters in Saving Francesca that were in the background but always fully realized. I just didn’t realize that I wanted to read more of them. That is one of the things Marchetta excels at: giving us bits and pieces of fully formed characters whom you love and relate to even without their full story. Despite my love for Georgie and Tom, this is still not my favorite Marchetta novel.

And now we come to the hard part where I have to choose between Jellicoe Road and Melina’s fantasy series for the top spot. I don’t think I can do it. So let me just lay out for you why Jellicoe is so so so so fabulous.

This book is exactly not what you think it’s going to be. The first 85 pages will confuse the hell out of you. The main character is as confused as you about her place in her world. There is a secondary story full of kids with other names that you aren’t going to understand until the end. The dude you are supposed to swoon over? You get introduced to him while he abuses another kid. It’s frightful and fabulous. She weaves a tale that will make you soar with swoon and sorrow. I read it AT LEAST once a year. It is a perfect novel. When I tell you I weep over it, I weep just to know it exists.

I’m lumping Marchetta’s last three novels Finnikin of the Rock, Froi of the Exiles and Quintana of Charyn (and short story, Ferragost) together as one because, well, they are a trilogy and I CANNOT and WILL NOT choose between them. They are perfect fantasy novels.

These are books of SO MUCH HOPE that they ooze it. Fantasy novels are often rife with their own mythologies, their special powers, and their unique world-building. Marchetta simply chose a landscape, gave it a name and populated it with people you want to root for and relate to. She masterfully makes you care about everyone. She takes a speech-impaired, would-be rapist and thief from the first novel and turns him into the protagonist of the next without a blip, without balk. There are characters here who have stories from 20, 30 or 40 years earlier that you are DYING to read just as you get glimpses of them. Her world is rich. Her characters are real. These books are compulsively readable. It is the most perfect fantasy series I have read.

Tell the Truth, Shame the Devil

Several years after she finished up the Lumatere Chronicles by ripping my heart out, Marchetta returned with something altogether new. Tell the Truth, Shame the Devil is a contemporary suspense novel, replete with the same heart-wrenching family drama that pinpoints the Marchetta modus operandi. In fact, despite being a thriller, this book has some of the gooiest lines in all of Marchetta’s literary world. She is simply incapable of writing anything – even a political and religious drama – that doesn’t relate to everyone. Familial ties. Familial bonds. It’s the terrain of Marchetta’s writing.

The Place on Dalhousie 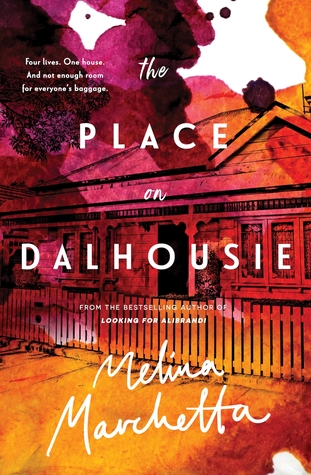 Dalhousie is a pseudo-sequel. It follows her novels, Saving Francesca and The Piper’s Son, but it also stands fully on its own two feet (those feet being perfect turns of phrase and gut-ripping relational connections, both Marchetta specialties). I wish I could tell you that it’s the plot of this novel that is going to wow you, or that the characters themselves are ZOMG!UNIQUE, but the unparalleled way that Marchetta writes is what is going to get you. Jimmy and Rosie would be the first to tell you that they aren’t really anything special. But this book is.


The young adult book reading community has known for years that Melina Marchetta is one of the greats, if not THE greatest, author of the genre. I hope if this post hits you like a wrecking ball of ignorance of her glory, it will inspire you to go read EVERY WORD she’s ever written. You won’t be disappointed.

What is your favorite Marchetta novel? YOU MUST CHOOSE.

The Cool Table@thecool_table
1.0K Following 1.0K Followers
Yesssssss https://t.co/rGaJC4TAJ4
28 mins ago
1
Latto Brought Big (Villain) Energy to #TheBachelor for episode two of Zach's season. https://t.co/qyqmqEZIpH
10 hours ago
1 4
@pagemelt I know nothing about them but it's a good assumption since the album is titled Dear Wormwood. I have so m… https://t.co/rXXSQbWwlG
11 hours ago
2
@pagemelt isnt the whole album based on the screwtape letters? RED FLAGs
12 hours ago
1
@MrsKowski unfortunately yes
12 hours ago
Archives
Pop Culture, Rants

Getting called on her crap? Rachel Hollis did not see that coming.