With only three episodes of Outlander season five left, our band of Fraser kin has a lot to sew up in short order. Bonnet is still out there, making plans to overtake River Run with Forbes, and … and … nothing else is coming to mind that needs met. I can’t think of any truly lingering plotlines.

So … with that in mind, I thought Outlander episode 510, “Mercy Shall Follow Me” would set up the wild meeting at Wylie’s Landing, the potential abduction of Jemmy and/or Bree on the beach and perhaps a chase down to Bonnet’s hidden lair. But it started and ended with the Bonnet Revenge Plot. Book readers and careful sleuths know what’s coming (or at least the bones of it), but a simple show-watcher would have to look at the arc of this season and wonder what else could possibly be on the Ridge’s horizon. For good or for ill, it has us wondering what the rest of the season was building toward.

Back in the Brothel

It’s always good when we can see what’s going on outside of the Fraser sphere. Bonnet is looking particularly swarthy with an unaccountable amount of dirt? bruising? scruff? on his face. And for some reason Forbes is really not ok with him looking at the sex workers, which I don’t understand unless he really just wants to nail down that 20% before Bonnet nails someone down. This scene is the first hint that all is not right in Bonnet’s pretty head; he’s got a bee under that ponytail that has curiously made him lose his edge. He’s the anti-menace. Forbes isn’t even bothered. Certainly not afeared.

Fraser clan is talking about their plan to assassinate a very well known smuggler in the midst of a busy tavern, but Jamie is still on point, making Claire give him exasperated love looks with his Dead Dad Jokes.

That’s What She Said 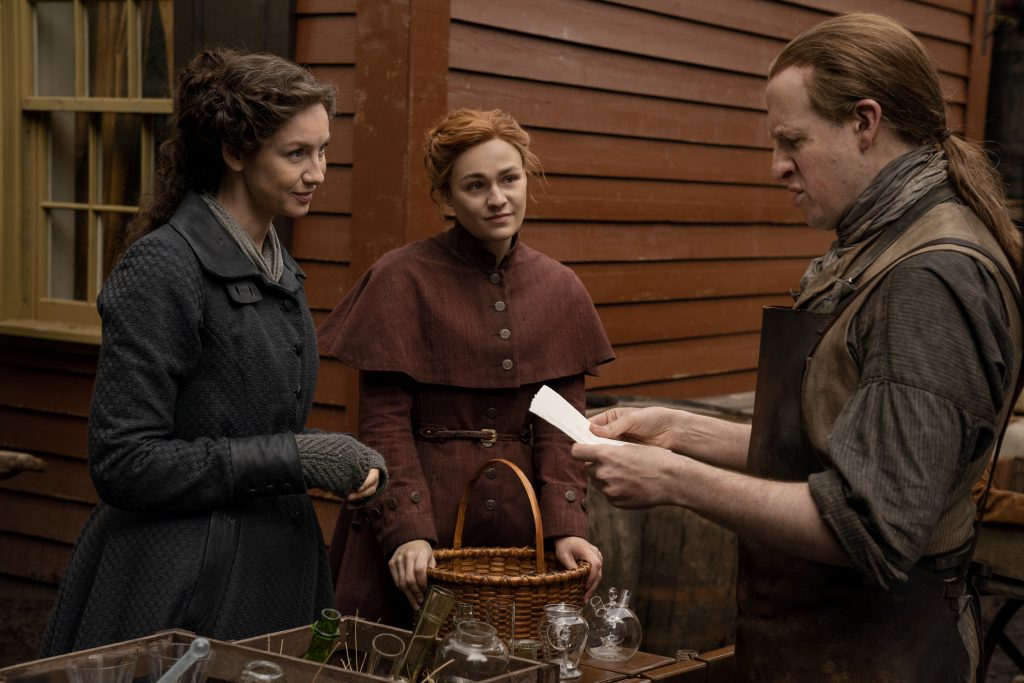 This scene highlights what we see later on the beach: the close and easy and adult relationship between Claire and Brianna. We were introduced to Brianna at the height of her brattiness in earlier seasons and seeing Claire and her daughter evolve into uncomplicated waters is a lovely fruition. Bree’s relationship with Jamie is still under advisement.

Sidenote: Why does Bree want to make her almost 3 year old a … mobile … to help him sleep?

Roger taking a whack at being point man in the plan to murder Bonnet is a good moment. I don’t have much to say about it other than Richard Rankin’s delivery was great, his voice still strained from his hanging, and it was some of the best written dialogue of the episode. Jamie’s confidence in him is still not complete, which he reminds him of by basically saying, “Ok, you’ll die and I’ll finish it for you.” Then that joke comes full circle when he lets Roger get almost shivved. Good stuff. 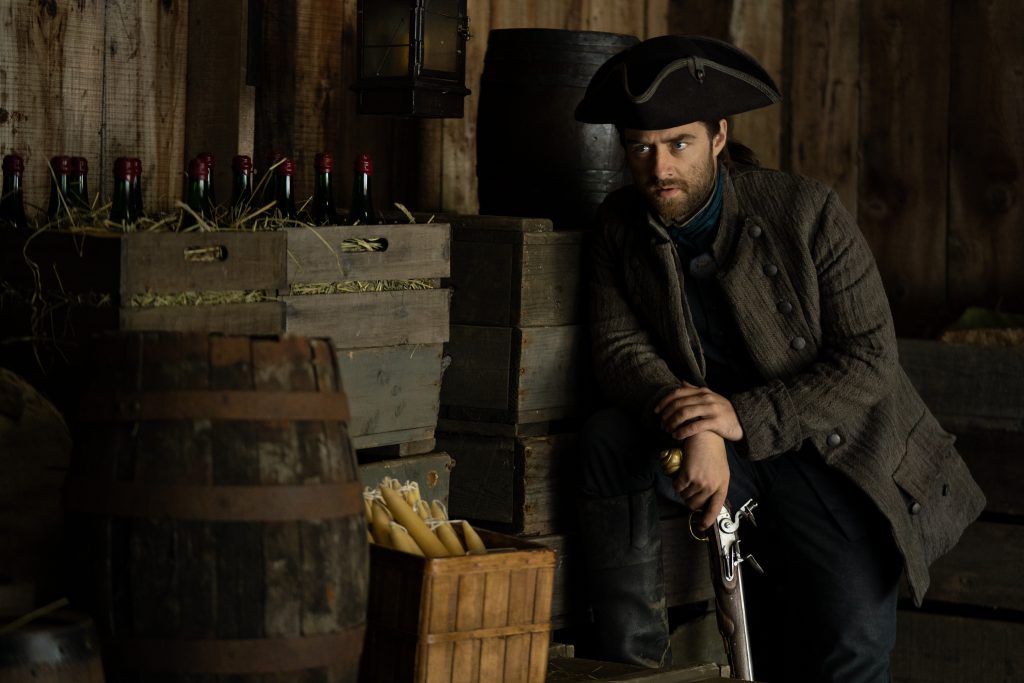 The moment that Bonnet steps onto the dune there is a palpable sense of heightened danger for Claire and Bree. This is a show where just last week Bree made the same face when a buffalo came into the front garden, so it was welcome to feel genuine emotion over an imminent threat.

We’ll get to how I feel about Bonnet’s lobotomy, but when Bree first awakes in his island getaway and says she’s still got beef with him, his “it’s not because I couldn’t remember your name, is it?” genuinely made me chuckle. But then I realized he wasn’t trying to be funny, and I lost all good will.

There Was An Attempt

Bree’s cerebral attempt to gain the upper hand or at least buy herself some time is reminiscent of some of her mother’s on-the-fly machinations in earlier seasons. If meant to show that she listened to her father about how not fighting back was the bravest course, it hit that note, if uncomfortably.

There was justice. And Bree doesn’t have to answer why. That’s exactly right.

No episode can hit all the right notes. Jamie seems a bit too cavalier about Brianna’s abduction. The scene in Jocasta’s drawing room was painfully melodramatic. Poor Billy Boyd. Why is Jocasta so mean to Duncan? Are we going to get some kind of side plot where Ulysses is in love with her because we’ve already established that they cannot handle enslaved characters with any kind of care, and this is not needed. Claire diagnoses Eppy’s scoliosis or whatever after seeing her take ten steps while wearing a billowing overdress. I am not convinced she isn’t a conjure woman. Speaking of the brothel scene, which girl is Jamie dealing with … and how … while Claire is healing Eppy? He’s conspicuously absent. Dune strife is difficult in real life and on film apparently. THAT PUNCH is EMBARRASSING. But. There is the bulk of the episode to deal with.

Stephen Bonnet is an opportunistic, scruple-less and sadistic scoundrel (that sadism part is important). He murders without compunction. He blinds men for perceived slights. What he isn’t is schizophrenic. If his behavior in this episode is to be believed, he suddenly felt a compulsion to rearrange his moral compass from non-existent, as Brianna intimates, to just skewing off-kilter. He has suddenly decided to become a gentleman, to raise a family, to perceive his own image in a child he doesn’t know and shouldn’t care about, to elevate himself properly, to court Brianna and to also … give away gifts? In the words of John Mulaney, we don’t have time to unpack all of that.

I’d believe some sort of play-acting on Bonnet’s part if there were a greater scheme at play. Certainly, Ed Speleers’ masterful performance is hinting that there is some method underneath the madness. Obviously, and I do mean super obviously as the writers have been shoveling this down our throats, he is covetous of the gold and land and wealth of River Run, and assuming parentage of Jeremiah is the most reasonable and, in fact, legal way to do so. But we are meant to believe that he has had a genuine leaf-turning because Bree came to visit him once and said something halfway decent.

I would say that I could believe this massive out of character move if it was a small interaction in an otherwise forward moving and well plotted episode, but Stephen takes Brianna seventeen minutes in and we are treated to another 30 of his earnest smarm and some sort of fervent childlike desire to please teacher. The man who stuck his fingers down Claire’s throat to get a ring and blinded a man with a rusty blade for pissing him off is looking up at his rape victim with a madness barely blanketed by a veil of sincere attentiveness to her opinion and knowledge. Even after the facade is meant to crack and we get the most uncomfortable sex scene of the season, he’s looking back at her with something like a need for approval. And … we are meant to believe this?

A man who pulled the at-sea version of a Jaime Lannister on a small girl and her mother can say something like, “the sea is hungry for souls” with tears in his eyes? Look, Stephen Bonnet didn’t have the best time in life. If you’ve read the books, you know the story he’s referring to with the men leaving him for dead. You would know he’s an orphan. But this is the SHOW, and we know none of that. Jaime Lannister is redeemable because we spent several seasons with him after he’d lost everything but his name and his acerbity. We’ve seen zero humanity or growth in Bonnet. We’ve also seen little genuine madness. And so this simply doesn’t work. It feels forced. Awkward. It makes Bree’s genuine attempt to game him out look pathetic and ill-advised and hopeless.

And then of course there’s the sex-trafficking storyline. Brought up in the first scene of this episode, and nary a moment before now in the entire season. All of Bonnet’s care and attention at trying to be respectable is thrown out the portside window just because Bree couldn’t convince him of passion? He’s suddenly passionless about all of this? WHICH IS IT? And for the sex-trafficking storyline to have import and depth, then shouldn’t we have been privy to it before now? There’s been no menace in Wilmington or the surrounds for young women. Nothing to stop someone like Bree and Claire from roaming the sea shore alone. Badly done.

But at least Bonnet’s dead. For real this time.

Join us tomorrow night for Hangoutlander on YouTube or Facebook as we chat about Outlander Episode 510 like Forbes and Bonnet on the porch at River Run. Too soon?

The Cool Table Has a Podcast Now!@thecool_table
1.0K Following 987 Followers
Who's watching with me? Gonna start at 1:00pm CST #HarryandMeghanNetflix https://t.co/Wz5n31uLCR
3 hours ago
3
@deannareads I'll go down with the ship that Bloodmarked didnt have a fair shake bc of its release date
4 hours ago
I made an aesthetic thing and it took a minute and it's doing TERRIBLY. LOL FOREVER https://t.co/7nYkJ9vMo0
4 hours ago
@baskinsuns @pagemelt I've never seen any good discussions or good insight come out of bookstagram. They almost alw… https://t.co/51anLn7rxo
4 hours ago
2
Can’t wait https://t.co/dMqJEWhOVR
6 hours ago
2
Archives
Entertainment, Fashion, TV