This past week has been wild. Gronk un-retired, to go play for the Tampa Bay Buccaneers. Bravo pushed The Real Housewives of Potomac premier until summer. And the man in the White House said tanning beds and Kaboom cleaner injections might cure the ‘Rona, while Dr. Deborah Brix sat there in her silk scarf and let him do it.

I was hoping the final two episodes of Making the Cut would give me the win I was so desperately needing. Good things can still happen, right? Not when Joseph Altuzara and a lady called The Blonde Salad are involved, apparently.

With Making the Cut, Heidi Klum and Tim Gunn set out to find the next global fashion brand. And in the end, they gave it to a white dude from L.A. How global.

The last three designers standing — Sander, Esther, and Jonny — leave Tokyo with their final fashion assignment. They must create/design/merchandise a pop-up shop, create a business plan, and construct a final 12-14 look collection for a fashion show.

But first, they go home. Well, Jonny goes to visit his favorite sweatshop in Bali, so other people can continue to do all his work. Sander and Esther start sewing themselves at their home studios in Antwerp and Berlin, with the help of more local labor.

Sanders’s pop-up is a happy and airy iridescent dream, filled with color and original prints. Instead of using models to take up space, he goes for the practical, employing two tailors to help every customer find the right fit. Using the logo of his new Miss Bos brand, his collection is fun and young, and I would wear the hell out of that tunic with the crystal collar.

Esther’s pop-up is a Brooklyn hipster speakeasy, with ropes and Edison lights hanging everywhere. While I don’t love it because it feels tired, it is certainly very Esther. Among her black clothes that all blend it together, she has pops of gold accessories.

Jonny’s pop-up mixes the hard and the soft, concrete with faux greenery and butterflies. He has clothes, accessories, and candles. I swear, the second Nicole Richie sniffed that candle, the competition was over.

In the most confusing touch, he has models vogueing about the pop-up. Jonny likes to take from the labor of women and from ballroom culture, which he is not a part. Cool cool cool. Category is…bullshirt.

The Making the Cut judges confer and Sander is sent home. And plot twist! He will not be showing his collection on the runway. I hate stuff like this. Let us see all the hard work Sander put it. At minimum, it would have added something fun to look at, and the producers know that Sander makes great television. Using his collection as a spoiler decoy for someone like Jonny is a slap in the face.

Esther and Jonny must now present their business plans to Christine Beauchamp, President of Amazon Fashion. She pronounces her name in the French way, but you know she was a Beecham until she got to Princeton. While she is not working for Jeff Bezos, Christine is busy collecting a ton of Allergan Brilliant Distinctions points.

Public speaking is hard for just about anyone. This segment was so cringey, I wanted to die from second-hand embarrassment watching it. I sit through too many powerpoint presos for my day job, and prefer not to endure it for my entertainment unless it’s Dorit from RHOBH explaining the financial issues she and PK are dealing with. I would 100% watch that powerpoint. But seriously, dear producers, please accept this note for S2. Keep the business plans behind the scenes. 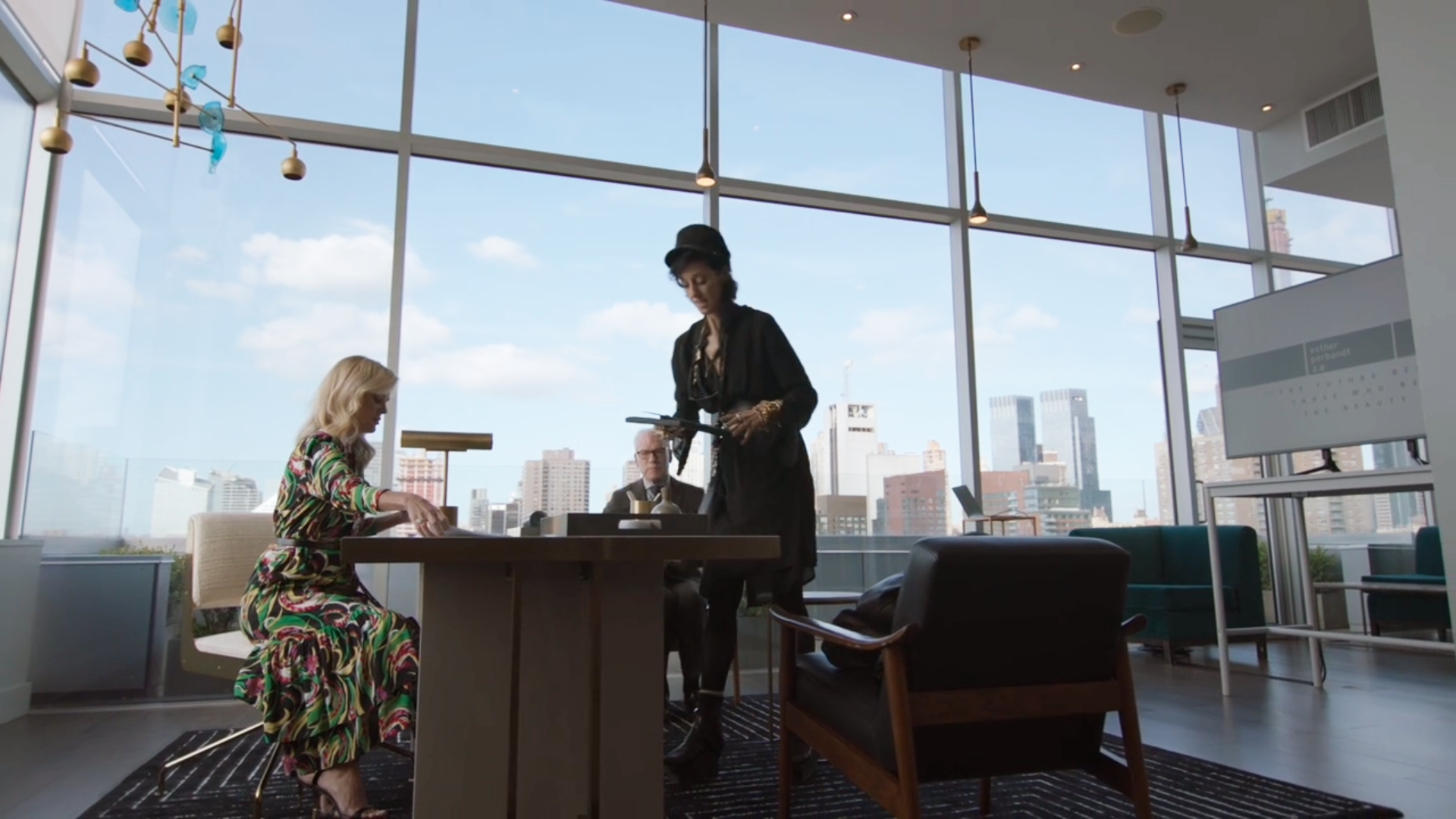 Esther nailed this part of the challenge. Even looking at her slides, she had very specific ideas about what she would need to build the “House of Esther”.

Jonny is a bit more problematic. His plan is to use cheap off-shore, Balinese labor to do smaller run, on-demand manufacturing, with reduced waste. The problem with that, in my own work experience, is that successful on-demand business models must be local to where you are stocking the shelves in order to have supply. Jonny needs hub-and-spoke, not a centralized sweatshop, because while you might have less waste, you are also going to have dissatisfied customers when nothing is ever in stock.

Onto the Runway with Laser Beams

This week, my friend showed me that if you type “pew pew” into iMessage, you get laser beam effects. The runway theme on top of a New York City building is very “pew pew.”

Heidi walks out to introduce the show in an iridescent mini dress that is seconds away from showing her whole tit. It’s from the Tom Ford “I hate women” collection.

Jonny goes first. His Metamorphosis collection is mostly black, with minimal color on the clothes. I do love the yellow pops of color he adds, but yellow Palmolive gloves? He does not understand women, this guy. That glove makes women think of two things: doing the dishes or being murdered, and neither of them are good.

Esther’s collection goes next. It’s black and translates poorly on screen. Each design starts to blend together. Everyone who has said she needs some color is proving the point. If your singular palette makes you forgettable, then the problem is your palette. Color at least gives your brain a break from “what am I squinting at.”

By the time we get to the judges table, I decide I don’t want to be in the presence of Jonny Cota anymore. As a character on a reality show, he has shown who he is, and I’m not only pulling against him, but I also don’t want to see him anymore.

Jonny’s fashion feels calculated instead of inspired. He is the opposite of Sander and Esther. While they are art, Jonny is artifice. Maybe the problem for me is timing, and that I’m just not in the mood for blatant capitalism right now, clothes selected in part by a woman who used to work at Goldman Sachs. Sure, that’s how the world works, but it doesn’t make compelling television.

Jonny is not the underdog. He is the next Tory Burch. He is making pleated skirts I bought all last summer from ASOS. They pair nicely with Adidas Superstars for stomping around the Montemarte.

We viewers wanted the next Alexander McQueen, and Heidi and Tim gave us the next Rachel Roy. Jonny Coto de Caza wants to be a lifestyle brand, similar to the dreams of Sonja Morgan.  (h/t to NewportStyle)

This was a global competition. We had a black man and a black woman. A Korean woman. An older Italian man. We had an Israeli woman and a Malaysian woman. Half of the designers were women. The winner was none of these.

So Jonny gets the million dollars, an Amazon on-line store, and a mentorship to help build his brand. The sweater dress I loved is already sold out. Natch.

What was Naomi Campbell up to this week?

Voting for Esther to win. Next season, Naomi needs to rule by fiat.

The Cool Table@thecool_table
1.0K Following 1.0K Followers
RT @BlessAmysHeart: And @bethorne created a reading list/reference guide she mentions during the show. I say Beth is the brains, and I’m th…
16 hours ago
1
RT @BlessAmysHeart: Want to know what I believe now after leaving the #Evangelical church? Check out the latest episode of our #Exvangelica…
16 hours ago
2
@chels__ebooks if you can't HEAR and SEE it, you aren't fit to lick booktok's boots
20 hours ago
4
Archives
Entertainment, Netflix