Since COVID-19 kept us from getting NCAA March Madness this year, we get to be all excited about Making the Cut’s Final Four. Which designer is Duke, you ask? Jonny. Duh.

Tim and Heidi meet the designers at the Rytoie Teahouse in the Kiysoumi Garden. Esther, Sander, Megan, and Jonny enjoy a Japanese tea ceremony, encouraged to enjoy a moment of zen and reflection on their journeys in Paris and Tokyo.

The next assignment? Building a collection of two-to-four looks that show how their brand has evolved since entering the competition.

The twist is that the designers will now be hands-on and in-person with their two seamstresses in the studio. You can’t manage a brand without being able to manage people.

We get a montage of everyone’s progression through the show. The good, the bad, and the shape of the birth canal. Sander is not always accessible, but he is always artistic. Esther is finding her femininity and new textures, as long as they are in black. Jonny wants to be more feminine, too. He likes our sewing skills, he might as well like our yang.

And Megan, who is the only one left without a win, is hungry and wants to spend her life building her own dream, not someone else’s.

Adventures with Tim and Heidi

I’ve been ignoring these little jaunts in my recaps because they are so over-produced and annoying AF. But this week, Tim and Heidi find a little dive bar down an alley, and they drink a lot of sparkling sake. It’s so normal and celebratory. And I love a tipsy Tim.

Esther’s collection represents standing up for her black universe, proving that black can be interesting and dimensional, especially with different textures and materials.

The judges wanted Esther to give them color, and she did in E7. Now she is doing what Esther wants. She understands the “rule” which allows her to break it on her own terms, and it’s why the judges embrace her collection.

Her t-shirt with the vinyl “Top Three” applique is genius, and it’s wonderful to see woman swallow her nerves and go after what she wants.

Her white top and pants, with a pleated wrap-around skirt, win the challenge. I don’t love the tie because it’s a little too Joe-Strummer-working-at-Buca di-Beppo for my taste.

The best scenes this episode are Esther working with her team of seamstresses. She has such respect for these women and wants them to feel included in the process and in the success of her collection. When people show you who they are, believe them. Esther treats people well and acknowledges their contribution. (Put a pin in that thought for later.) 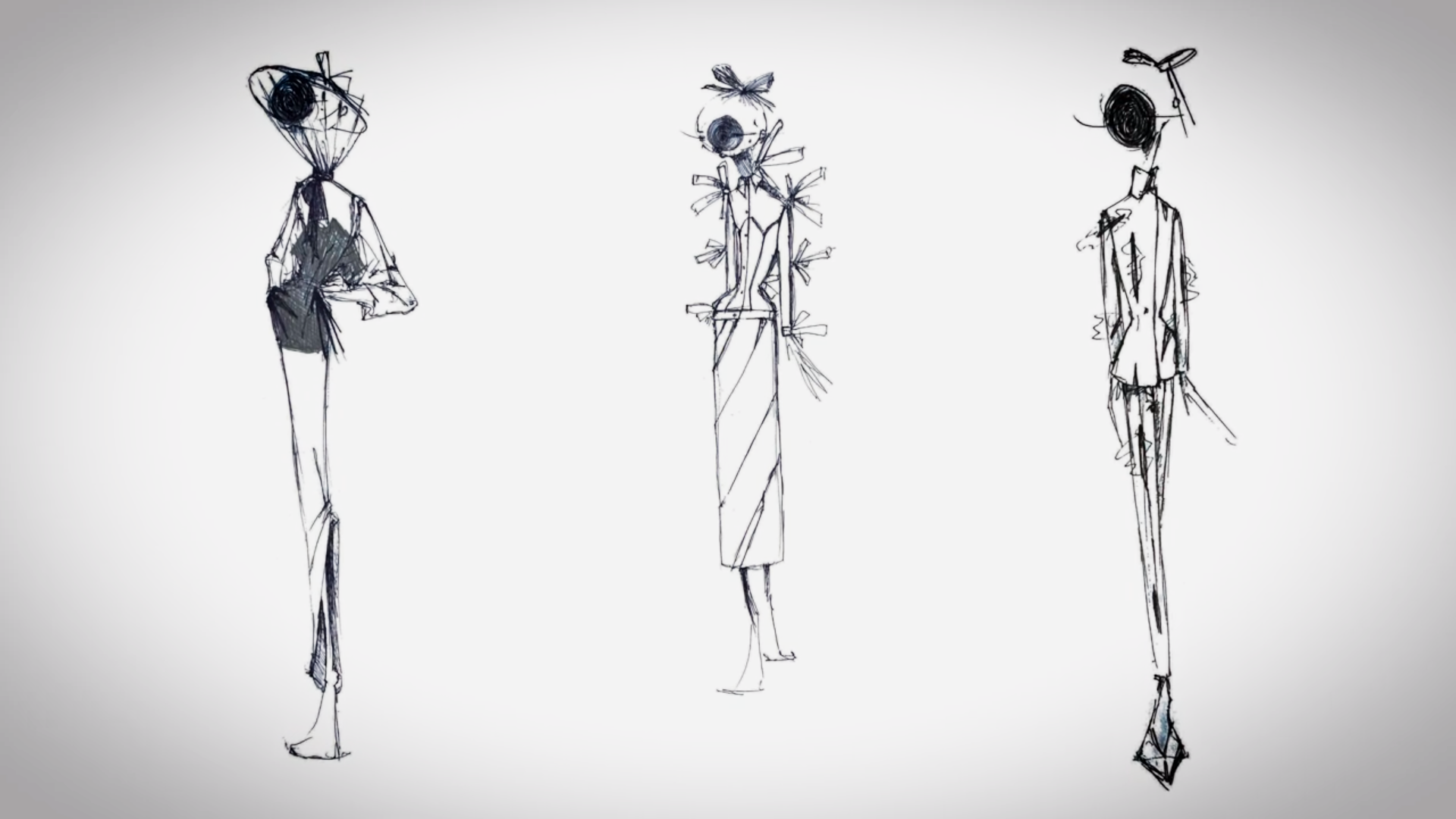 Before we talk about Sander’s clothes, I want to mention his sketching. I don’t even have anything smart to say except, this is art and I love it. Every piece he sells should come with a postcard of the original sketch. Think of it as a fashion souvenir.

Sander’s collection represents the past, present, and future. He displays that theme in both the designs and the styling. An ode to the rising sun of Japan, each “sun” is moving across the skies of the models’ faces.

At the fabric store, Sander picks out black, chartreuse green, and pale pink. During “Tim time,” Tim calls the pink color “insipid,” but I was kind of excited to see how Sander would work it in. Basic bitches like me love a pale pink.

His first look — the past — is another delightful knock at the judges, giving them their accessible t-shirt on top of a t-shirt dress. The cut and the colors do feel “past,” like an homage to the bright colors and wackiness of the 80s.

The present look is my favorite, with its sexy open back and ties that reveal more of the chartreuse. Sander gives you a long sleeve to keep the arms warm while your partner’s hand can take care of your chilled back.

The future is a sleek suit, with cutouts to show pops of color. I envision this as the uniform in a faraway space station, where humans end up after Earth is done with us. In making his case to the judges of why he deserves to be in the finals, Sander says he represents the future, and he is not wrong. Sander 2020!

Megan’s collection has a warrior vibe. Her woman killed that crocodile and is now wearing it. The look on the left is a variation of the runway look from the E7 challenge, but more wearable. Her suit shows off her tailoring skills, to remind the judges that she can make a great suit. She has consistently given great jackets with bad-ass touches. And the white look is what Megan does best: a flowy and breezy silhouette that can flatter any woman.

I describe all her looks this way because everything Megan sent down the runway are all distinctly Megan. It is a got-dam insult when Joseph tells her she took her ideas from Esther. Naomi exclaims, “Just because it’s black?!” She should have said, “Are you accusing her of stealing ideas because she’s black?” It was so insulting and Naomi was not having it.

As the great Nora Ephron said: everything is copy. Every designer is actively inspiring the other. They can be inspired by place but not people in the room? Pish. Besides, Jonny would not have had that Victorian dress without Megan, and Joseph said nothing. The accusation lands, and Megan is sent home.

Jonny’s collection is an unhappy mess. It looks sloppy. The first top is totally sheer, and if it’s meant to be for any gender, apply the same rules to men. If you don’t want to see nipples, then it should be all nipples. The Victorian dress is pretty, but the COTA bag strapped across it ruins the impact. The judges say that save the dress, everything else is “been there, done that.”

Jonny was not have been able to finish his looks without Esther’s help in sewing. Jonny used Rinat’s labor a few weeks back and now he is using Esther’s to help propel him. Not once does he acknowledge it in the the judging.

When asked why he should stay, he says that he has always used armor to protect himself and that he is softening and finding the feminine to be strong. He does a good job advocating for himself. But when people show you who they are, believe them. Jonny cares for himself and does not acknowledges the contribution of others.

Megan is not as metaphorical in asking for one more collection. I wish she had said, “I’m a black woman and I have seen — and will see — greater barriers in the world of fashion than Esther, Sander, or Jonny ever will.” But women aren’t taught to advocate for ourselves. The world likes us small and quiet. Even Esther had a hard time doing it, by stitching to request on a t-shirt and letting the font do some heavy lifting. So Jonny moves onto the final three.

What was Naomi Campbell doing this week?

Internally losing her shit that Megan was being sent home by an influencer who calls herself The Blonde Salad.

Catch up with all TCT Making the Cut coverage. The final episode drops Friday on Amazon Prime.

The Cool Table@thecool_table
1.0K Following 1.0K Followers
Yesssssss https://t.co/rGaJC4TAJ4
59 seconds ago
1
Latto Brought Big (Villain) Energy to #TheBachelor for episode two of Zach's season. https://t.co/qyqmqEZIpH
10 hours ago
1 4
@pagemelt I know nothing about them but it's a good assumption since the album is titled Dear Wormwood. I have so m… https://t.co/rXXSQbWwlG
12 hours ago
2
@pagemelt isnt the whole album based on the screwtape letters? RED FLAGs
12 hours ago
1
@MrsKowski unfortunately yes
12 hours ago
Archives
Entertainment, The Bachelor, TV