If we learned anything from last week’s premiere episode of The Bachelor Presents: Listen to Your Heart, it’s that Bachelor Nation will watch literally anything that involves attractive people finding love in a hot tub. Add in legit musical talent and it’s barely embarrassing.

Then again, my standards are so low at this point that I’m considering showing it to my kids instead of homeschooling. It can count as both music class and sex-ed.

In the last episode of Listen to Your Heart, the women had the power to decide which men would live to see another day on the quest to find love. This week the men have the power and there are new women added to the mix.

It’s like a Pitbull music video with less autotune. What’s not to love?

Singing with Ryan wasn’t to Jamie’s (21) taste last week, so when she got the first date card of the week it went to American Idol alum, Trevor (29). They made their way to Venice Beach where they busked while singing “Girl Crush” by Little Big Town with subpar harmonies. Who cares though, because there’s a hot tub on a balcony for them to make-out in.

Meanwhile, back at the mansion, a new woman arrived to join the cast. Natascha (33) is a self-described diva from Los Angeles who wears studded jeans. It’s weird seeing anyone in jeans after five weeks of shelter-in-place, but studded jeans is a whole other level. More importantly, Natascha is friends with Trevor’s ex and she’s not afraid to spill the tea about his past infidelities.

Apparently Trevor was a big fat cheater -or at least that’s what the random person the producers brought in at the exact right moment want us to believe. Natascha wasted no time airing his dirty laundry. Nor did she hesitate to force him into a confrontation the moment he returned to the mansion. She was like a dog with a bone, vicious and victorious. By the time she was done with him, he admitted to emotionally cheating, lying, and was near tears ready to confess it all to Jamie. All I’m saying is that if I ever need a criminal prosecutor on my side, I’m hiring Natascha.

How did it all end? Trevor told Jamie everything, and she chose to keep moving forward with him. I’m shocked.

Bri asked Chris on the next date to Guitar Center where they sang songs and confessed that they’re falling in love. The power of Stockholm Syndrome strikes again. To be fair, Chris is an extremely talented musician and Bri is…pretty. Hey, it worked out for John Legend and Chrissy Tiegen. I’m into it.

You have to hand it to Sheridan. The 27 year-old with long locks, multiple earrings and absolutely no game without a guitar in his hand (like most men with guitars in their hands, if we’re being honest) took one look at Julia and went all in. Julia (27) is a former Miss. Pennsylvania who is way out his league. They went on a date to iHeart Radio where they performed “The Bones” by Maren Morris together. The girl can sing. Sheridan is in deep. There’s no way this ends well.

A couple of new girls arrived at the mansion, but the last date card of the week still went to Savannah (25) who immediately gave it to Brandon (34). Why? Because Brandon is hot. I mean, there might be more to him than that, but I doubt it. The duo had drinks and sang “Fever” at the The Dresden jazz club. I don’t know if my standards are getting lower if they actually sounded really good together. Probably both.

Let’s Wrap This Up 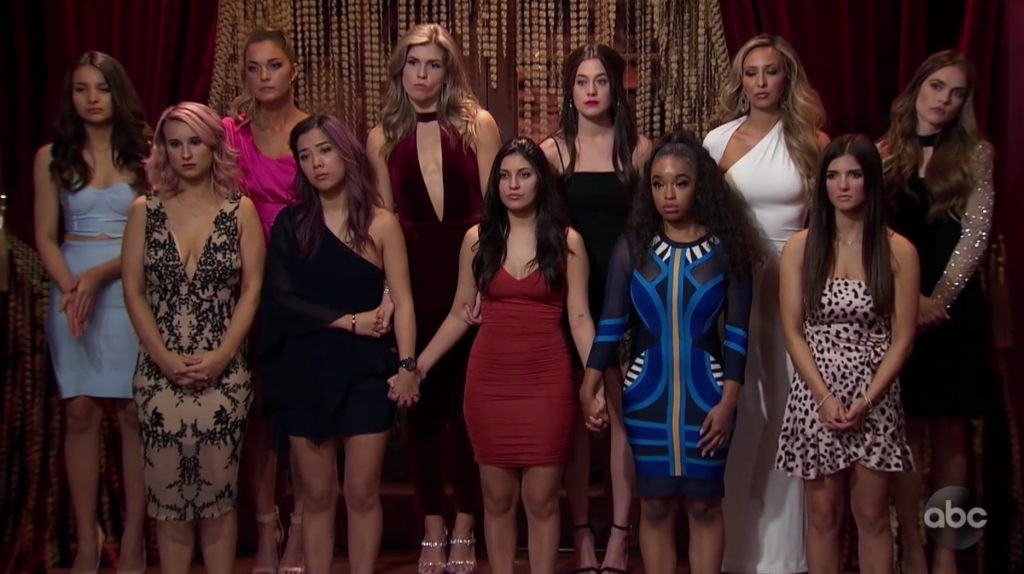 Full disclosure, my kid had a meltdown about accidentally deleting her text thread with her BFF so I missed the cocktail party. I could go back and watch it later, but…no thanks. From what I can gather Rudy worked the room and kissed basically everyone very, very poorly. It also sounds like Julia told Sheridan she isn’t feeling it and then kissed Brandon. I don’t know for sure, but my impression was that bad decisions were made in abundance, as per usual.

In the end, Brandon gave his rose to Savannah and Sheridan still gave his rose to Julia like the besotted fool he is. That means Mel, Marianna and Cheyenne were sent home. I still don’t know who any of them are either, but Mel cried over Brandon a lot. So at least we know she has terrible taste in men.

What do you guys think of Listen to Your Heart? Next week is the group’s first live performance with guest judges, Jason Mraz, Ke$ha, and JoJo Fletcher and Jordan Rogers. They’ll be judged on both their musical and physical chemistry. No pressure. I think I’ll be able to handle another week of this, but no promises.

The Cool Table@thecool_table
1.0K Following 1.0K Followers
Yesssssss https://t.co/rGaJC4TAJ4
1 hour ago
1
Latto Brought Big (Villain) Energy to #TheBachelor for episode two of Zach's season. https://t.co/qyqmqEZIpH
9 hours ago
1 4
@pagemelt I know nothing about them but it's a good assumption since the album is titled Dear Wormwood. I have so m… https://t.co/rXXSQbWwlG
10 hours ago
2
@pagemelt isnt the whole album based on the screwtape letters? RED FLAGs
11 hours ago
1
@MrsKowski unfortunately yes
11 hours ago
Archives
Entertainment, Fashion, TV

Making the Cut E7: No One Wants A Skingraft