The Bachelor Wants You to Listen to Your Heart

Beyond the clothes and challenges, Making the Cut’s production style feels like a glamorous travel show, which is so needed right now.

In 2019, I got to see both the Eiffel Tower and the similarly inspired Tokyo Tower with my own eyes, and this show is making me feel nostalgic and very lucky for the life I have lived. When I finally get around to packing my death suitcase for the hospital, I should include my set of French postcards and that super soft sweater I bought in Shibuya. I’ll also include tweezers and beg the nurses to keep me from going full Magnum PI while on oxygen.

The challenge this week is all about Japanese streetwear. If you asked me to define “streetwea,” I would say it’s subversive casual with lots of room to eat Pocky.

The designers are sent into the Harajuku district to find inspiration not only for their designs, but for their own custom printed fabrics. On-demand fabric printing opens up textile design to anyone. You want Elizabeth Warren’s face on cotton, to use on panel curtains you sew for the living room? You can do that!

The designers are fighting not only for a chance to sell their winning look on Amazon, but also create a look for Puma. They showcase their collections on the escalators of the Tokyu Plaza Harajuku and the street below. Tokyu Plazas are like the Simon Malls of Japan, but with better exteriors.

Before we get into the looks, Heidi has brought on a guest judge because Nicole and Carine must have missed that direct ANA flight from Charles de Gaulle.

The new girl, Chiara Ferragini, is described by Forbes magazine as the most famous fashion influencer in the world. I’ve never heard of her, but I only read Vogue. 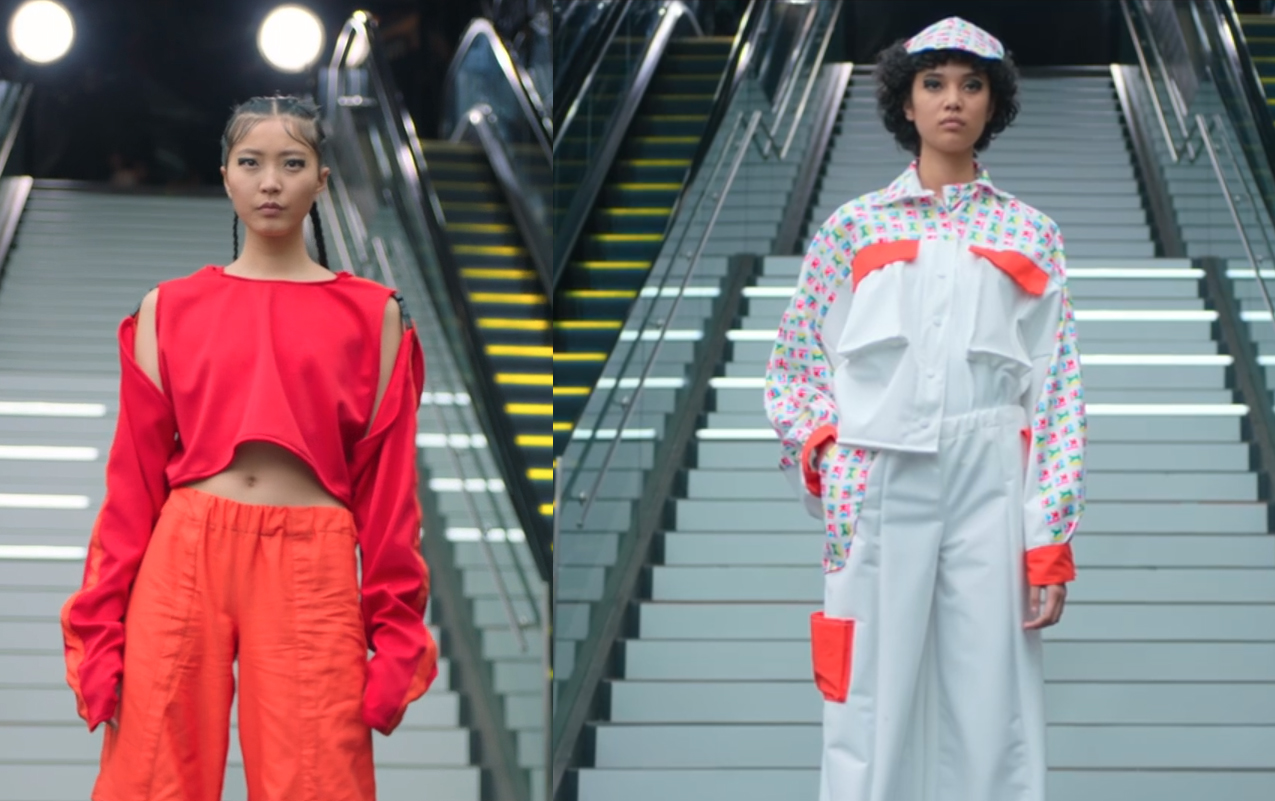 Ji Won’s collection has street edge that she softens with the use of color. The orange adds a fresh pop, and the Korean character print of Ji Won’s name adds playfulness.

The industrial clasps on the solid shirt and pant are genius. And maybe it’s because my hands are always cold, but I love a super long sleeve that I can clench my fists in.

Esther’s look continues to be “CMYK minus the CMY.” Using a polyester mesh, aka football jersey material, with lots of detailing, Esther has a knack for making monochrome anything but boring. I love the crop top and would buy it in a second.

My problem with Esther are her “hats.” They look like homemade dreadlocks that Ole Miss ADPi girls would wear to a Sig Ep Jamaican Me Crazy party. Did no one think this was a bad look? Insert the “Oh baby, no. What is you doing?” meme. 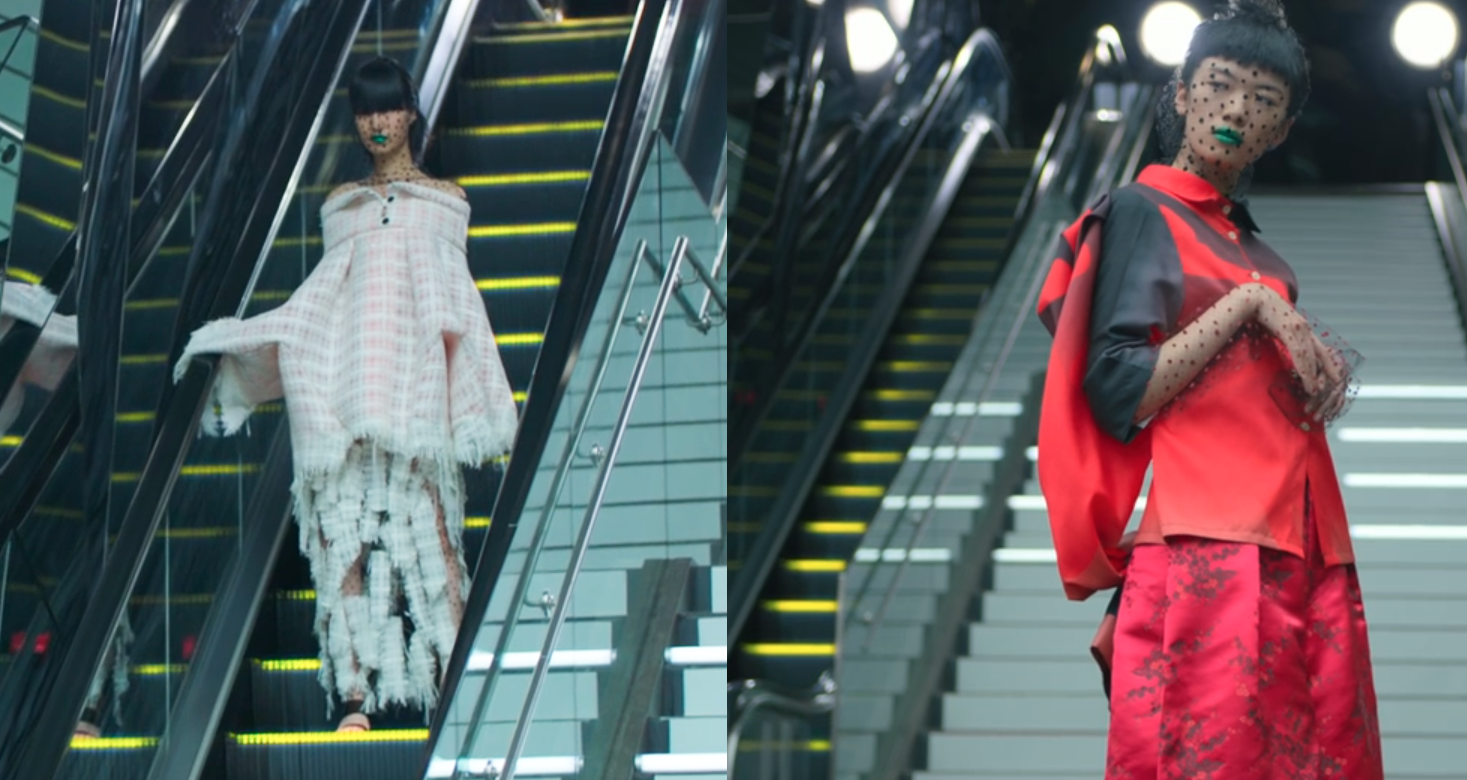 Sander is pulling ahead as my personal favorite. He has a clear POV and confidence, with a delightful sense of humor. While the judges loved his collections, they chided him for not making quote-on-quote streetwear. These looks might not be accessible and wearable, but it’s art and I love it.

These are the clothes we make after we eat the rich on the Upper East side and raid their closets for the Chanel and Valentino. It’s the ultimate reduce/reuse/recycle. Fewer rich people; more Sanders.

I am always biased against menswear in these competition. Don’t curr, don’t curr.

And black sheer anything always reads “cheap” to me. Church ladies wear black sheer sleeves when they are trying to spice up a funeral outfit. Besides, the sheer chiffon would not even be on the runway had Rinat not finished her work early and helped Jonny sew the sleeves.

The Blonde Salad said the runway look reminded her of a samuri. She’s got eyes, that one!

Megan seems to think voluminous is a POV. It isn’t. While I like the flowy top, there is nothing elevated in her accessible look. It just looks like clothes.

The make-up choice is bad bad bad, like the Joker went in for a kiss and you did not want it at all. I do like the pop of red on the runway outfit, reminding me of my favorite DMC embroidery color 606, Bright Orange Red. I made a lot of “And yet, she persisted” projects using that color. 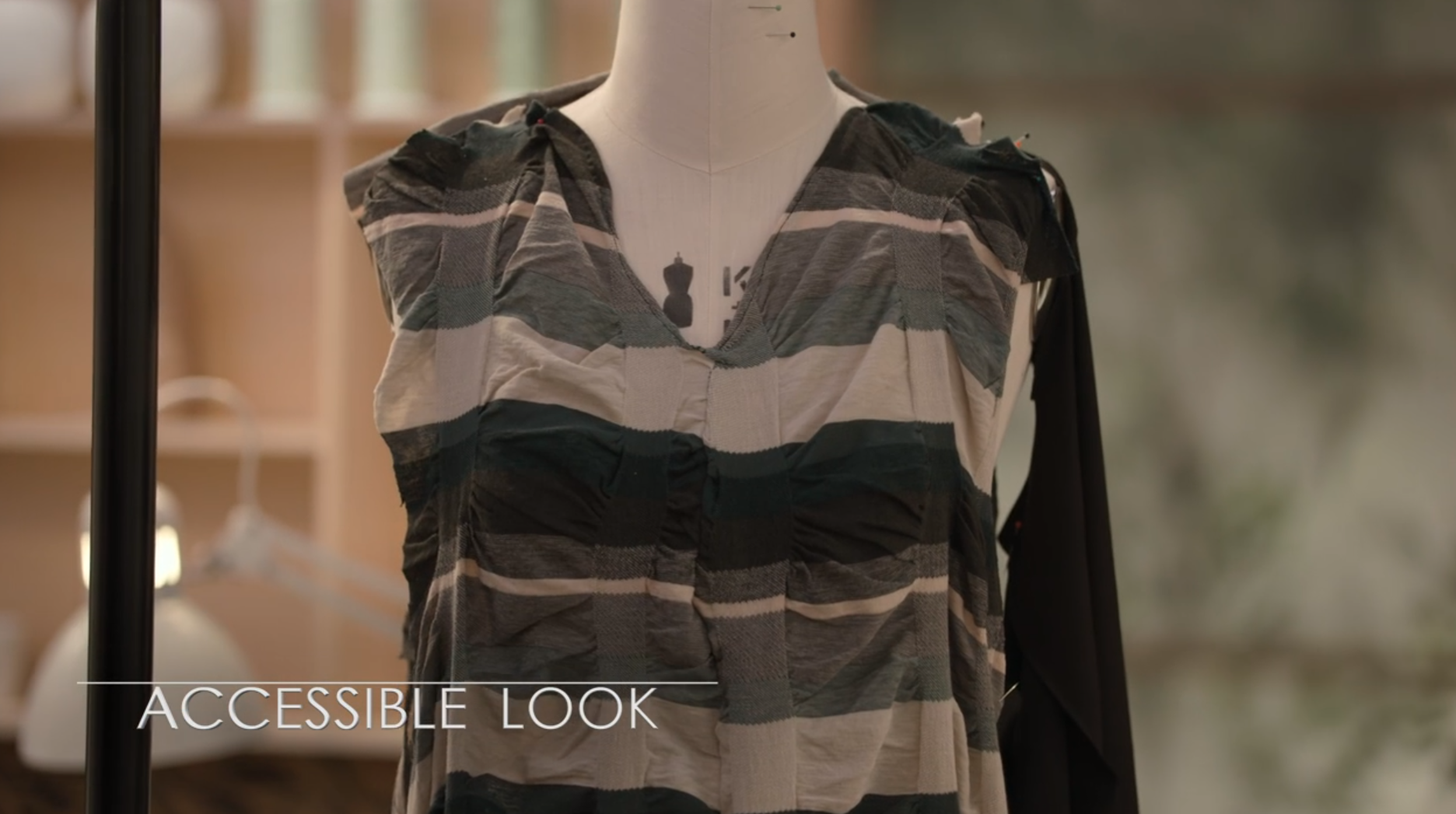 Sabato was his own worst enemy in this challenge. The looks he sent down the runway were mourning wear for My Chemical Romance fans.

After he randomly ran into an old friend on the street, I thought Sabato would find inspiration is his former home, but instead, he collapsed under the weight of memories.

His worst mistake was not listening to Tim Gunn, who said his original accessible look pulled at his heatstrings, calling it a breakthrough for Sabato. While I didn’t love this look on his model during the fitting, when you are floundering, use the dress that “the risk taking woman who doesn’t give a shit” would want to wear. Sabato scraps it and is sent home by the judges. Addio, Sabato.

Rinat won this week’s challenge and totally deserved it. I love both outfits.

Inspired by Japanese construction workers and the mixed patterns she saw along Cat Street, Rinat stepped it up this week. Like Naomi tells her, her accessible look has a hip postman vibe. And if anyone could use some love right now, it’s the post office.

Her runway look says “sleeping bag,” but in the best possible way. It says, “Camping sucks and I’m going to use this sleeping bag for something way better than lying on the cold, hard ground while I pray for morning.”

The judges bicker while trying to pick between Jonny and Rinat to decide the winner. Rinat is a very good person who does not bring it up, but I sure as shit will. Jonny is a punk-ass bitch for not telling the judges that without Rinat helping him sew the chiffon on his jacket, he would not be in the top 2. A woman saved his ass and like a typical dude, he did not acknowledge it while asking the judges to award him the victory. I see you Jonny. I see you.

What is Naomi Campbell up to this week?

Naomi looked fantastic in a mix of pleating on top and bottom. I love wearing a pleated skirt with sneakers. I also love that Naomi cannot stand the new girl, who is terrified to even look in the supermodel’s direction. You can cut the tension with a couteau. They even changed the judges seating order to protect everyone involved. Bless this mess.

Catch up with all TCT Making the Cut coverage. New episodes drop every Friday on Amazon Prime.

The Cool Table Has a Podcast Now!@thecool_table
1.0K Following 988 Followers
Getting my hate watch britches on for this one. https://t.co/SZ1N40HOHi
12 hours ago
3
So excited to be a guest on Sierra & Ryan Talk the Tok: it’s a #booktok podcast! Go listen and give them a follow. https://t.co/qzOVPWS1Bh
5 days ago
2 6
SooooOOoOoOooo it's almost #SDCC time. We're getting all our cosplays and deodorant choices in a row. Who else will be there?
6 days ago
6
@ch00chelo DEAR LORD VIVEK OJI has been the best book I’ve read this year
2 weeks ago
2
Holy shit the last episode of Kenobi
2 weeks ago
4
Archives
Entertainment, Outlander, TV

The Bachelor Wants You to Listen to Your Heart