Happy Coronaversary. It’s been a full year of masks, social distancing, fighting people at Target for the last can of Lysol Spray, and – most heartbreaking – travel restrictions. Flights cancelled, passports left unstamped, and foreign continents and new adventures just out of tourists’s reach (for the time being). Never fear, forlorn traveler. Men in Kilts is the gift we give to you this Coronaversary.

This week, the Men take to the road to explore the rich Scottish traditions, crafts, and language that made us all incorporate Gaelic in our everyday conversations and learn how to pronounce Sam’s last name. “Culture and Tradition” had its moments – from Sam and Graham visiting the oldest tailor shop in Scotland to becoming the country’s worst sheep herders – and very much had us humming Fiddler on the Roof’s “Tradition” the second it started. However, this episode left us wanting both more and less. More traditions, less jokes. More Gaelic, less slapstick. More Scotland, less Outlander. Speaking of which…

Our Thoughts on Men in Kilts Episode 105: Culture and Tradition

Julie: Janna, I was looking over our last four recaps and it’s clear that we love this show, love the exploration of anything and everything Scotland, and we even love the genuine banter between Sam and Graham. But each week, the two of us have had a common concern that Men in Kilts leans too much into Outlander throughout each episode. This week was no exception. In fact, “Culture and Tradition” felt less like a travel episode and more like a primer for Outlander. We had entire scenes from Outlander past – Claire foraging for fungi, Dougal speaking Gaelic. Then there was Sam “refusing” to learn more about lavender, a tongue-in-cheek nod towards Jamie Fraser’s, not Sam Heughan’s, aversion to the herb.

Janna: I feel like a broken record, because it is the same complaint every time, but it’s true. The subject matter is great, Sam and Graham were great choices as hosts, and the show itself looks and sounds gorgeous. But as someone who is not watching for Sam and Graham, or because of Outlander, I do find it distracting. But I also recognize that for a lot of viewers out there, the show is giving them exactly what they want, so it really comes down to personal preference (and how picky I’m feeling).

Julie: We’ve come to realize that Men in Kilts isn’t really a deep dive into Scotland. It’s a show that explores Outlander’s Scotland. Let us all say the serenity prayer together: God grant me the serenity to accept the things I cannot change. Amen.

Scotland But Make It Fashun

Janna: The first stop on the Traditions Tour was Stewart Christie & Co, the oldest tailors in Scotland. Stewart Christie is the home of bespoke suits (made completely in house!) and under the command of Tailoring Goddess (and Moira Rose doppelganger), Vixy Rae. We also learned that Scots take their Harris Tweed very seriously, and that Sam and Graham look just as good in tweed suits as they do Tuxedo Kilts and cable knit sweaters. 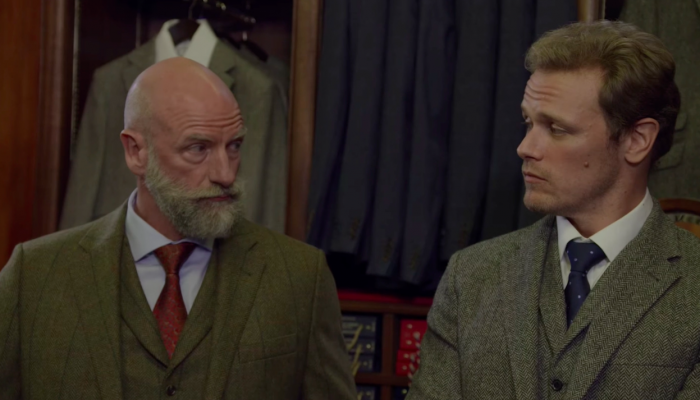 Julie: ZZ Top was right when they said, “Every girl crazy ‘bout a sharp-dressed man.” When Sam and Graham came out in those three piece suits, I literally gave a standing ovation. Bespoke tailoring is an artform and those two men were the perfect walking billboard for this Scottish tradition. I know that Sam is gunning hard for Bond, but after seeing him in Harris Tweed, I think he needs to throw his bowler hat into the Kingsmen franchise ring.

Speak Gaelic to Me

Julie: Nothing is more badass than keeping a tradition alive that bucks the system and pisses off the man. I loved, loved, loved that the gaelic language was not only an act of preserving the Scottish culture, it was a complete middle finger to British tyranny. And Sam, I’m also that person who, when learning a new language, goes right to “swear words and phrases.” Give me “Shit!” in all the world languages.

Janna: Gaelic is such an expressive, lyrically language, but seems devilishly tricky to learn, even if Morag McDonald did make it sound so lovely. It was cool to learn that Gaelic is still some people’s first language, even though only 1% of the population speak it. Come on Scots, time to get back to your Gaelic traditions! Slainte mhath!

In the Company of Women

Julie: Janna, did you notice something absolutely beautiful and amazing the first half of this episode? No, I don’t mean the men in Harris Tweed, although we can’t love them enough. I mean how the show featured more Scottish women! From Vixy Rae to herbalist Claire Marcello, we had the female representation that we’ve been craving for since this show started! I loved their segments, their knowledge and expertise, and how not even Sam and his bad dad jokes could thwart their absolute lady swagger.

Janna: So! Many! Women! You love to see it. I wish I had literally any of their skills, starting with Vixy Rae’s flawless winged eyeliner. 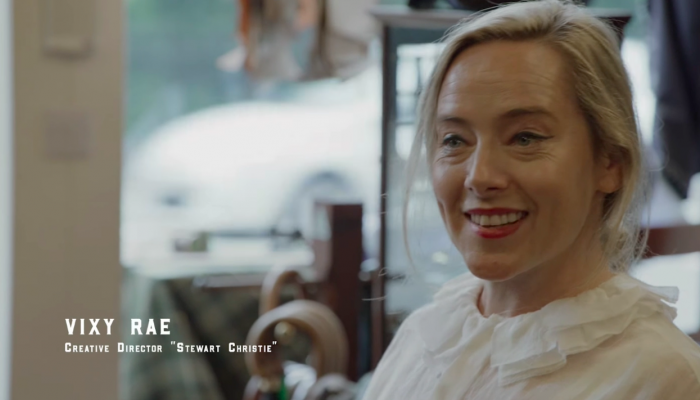 Julie: Lise Bech and Anna Liebmann need their own basket weaving YouTube channel. I could watch them for hours and experience the type of serenity one only gets with some melatonin gummies and the Harry Styles’s sleep story on the Calm app.

Go to Your Timeout Corner, Sam

Julie: When Men in Kilts first premiered, we quickly discovered that although it was a “docuseries,” Sam and Graham were still playing roles: Graham was the more mature, buttoned-up, straight man to Sam’s jovial, high-spirited, class clown. Each episode, we’ve watched Graham give Sam those looks – the type of looks that say, “Find your chill, bro” or “Settle down, young pup.” Although innocent, Sam’s humor has been both a source of laughs and cringe these past few episodes. However in this episode, it became more of a distraction than a source of comic relief. From wildly batting away midges during the gaelic lesson to throwing potatoes at Graham while Lise Bech was explaining the art of basket weaving, the focus shifted from learning about Scottish culture and traditions to learning that Sam was that disruptive kid in a classroom. We love funny, lighthearted Sam, but moderation and perhaps more self-awareness are needed.

Janna: I agree- Sam and Graham’s pseudo-antagonistic relationship is starting to feel a little distracting and/or disrupting. It’s a big part of every segment now and frankly takes attention away from the experts and topics. Their humor helps liven the show, but it’s become a case of “a little too much of a good thing”. Read the room, guys!

Julie: Well, I don’t think it’s a stretch to say that Sam and Graham do not have a future in sheep farming, and that was made clear when they visited Skye crofter Donald MacLeod. The dogs even lost respect for the men when it became clear that they had no idea how to wrangle sheep. Best part? One of the crofters murmuring, “Christ above.” Our thoughts exactly.

Janna: Sheep herding looks like hard work, but can you really complain about that location? I could happily roam the hills of Skye rounding up sheep with my trusty and adorable collies. Sam and Graham didn’t need to work up such a sweat, though. I have it on good authority from an old childhood friend that you can just ask the sheep nicely and they will walk right into the pen. 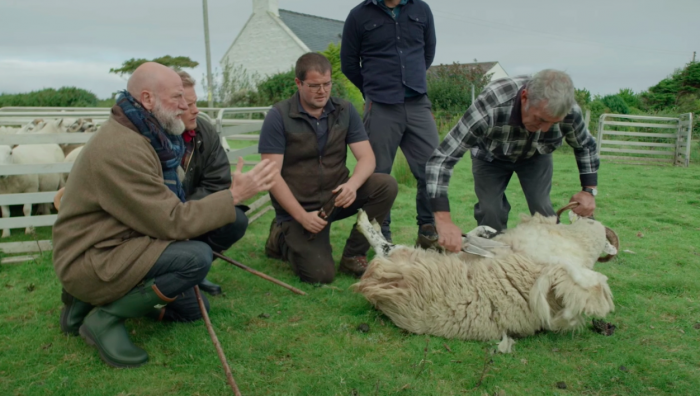 Who Won the Episode

They brought down the King of Men and are perhaps the longest-standing Scottish tradition. Actually, they’re the stars of this week’s episode. They are legion; they laugh in the face of Sam’s wild gesticulation, but not at his bad dad jokes. Of course, we’re crowning the midges as this week’s winner. 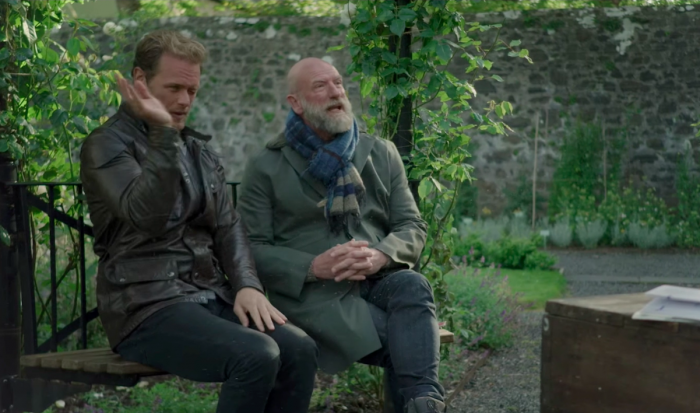 Somebody weave that guy a willow-reed fan!

Is wrangling in Sam Heughan a new Scottish tradition? Let us know your thoughts! Men in Kilts and the Women in Sweats are taking a break next week, but we’ll all be back March 28th! Need more Outlander until then? We got you covered!

The Cool Table@thecool_table
1.0K Following 1.0K Followers
RT @BlessAmysHeart: And @bethorne created a reading list/reference guide she mentions during the show. I say Beth is the brains, and I’m th…
14 hours ago
1
RT @BlessAmysHeart: Want to know what I believe now after leaving the #Evangelical church? Check out the latest episode of our #Exvangelica…
14 hours ago
2
@chels__ebooks if you can't HEAR and SEE it, you aren't fit to lick booktok's boots
18 hours ago
4
Archives
Current Events, News, Rants