Our Thoughts on Men in Kilts Episode 103: Song and Dance

The following is a joint statement by the Women in Sweats:

In last week’s recap for “Scottish Sports” – an episode we overall enjoyed – we noted that there was something glaringly missing from the first two episodes. WOMEN. No trace of Scottish female chefs, distillery owners/employees, bartenders, athletes, or even historians. We simply asked: Where are the women in this show?

While many of you agreed or told us you didn’t even notice, a few were quite displeased that we would ever find “fault” with Men in Kilts. That “it’s called MEN in Kilts, not Women in Kilts,” and – our favorite – “to get our heads out of our arses.”

First, our heads are very much out of our “arses.” If they weren’t, we wouldn’t be able to see this obvious omission. Secondly, while the show is entitled Men in Kilts, we understand that the “Men” in the title is about Sam Heughan and Graham McTavish, and not about an entire country or culture. Scottish culture, history, and traditions belong to all men, women, and non-binary people alike.

Bottom line, we like the show! We really like the show, a show we watch with both an appreciative eye and a critical eye. Those two are not mutually exclusive and it doesn’t make you a “hater.” Whether we agree or disagree, we’re all still fans. Thank you for coming to our Ted Talk.

Stick It in Your Pipe

Julie: I’m probably going to get my Outlander fandom card revoked for this confession but I truly feel like we’re in a safe space: I hate bagpipe music. I watched the episode last night on the Starz app, and I swear I still have the ringing of bagpipes in my ears today.

Plus when I think of bagpipes, all I can think about is that moment in Friends when Ross tries to play them for Monica and Chandler’s wedding, and Phoebe “sings” along with him:

Janna: I will fight you anytime, anywhere, because I LOVE bagpipes. Inject that haunting noise straight into my auditory cortex.

Julie: Since this episode is “Song and Dance,” bagpipes are definitely this week’s star. The fact that they were used as an “instrument of war,” tracks: I’m fairly certain any opposition would lay down their weapons in order to cover their ears. Well played, Scots. Throw the enemy off with tinnitus and then attack!

Janna: Speaking of tinnitus…I’ll admit, I was kind of disappointed that we didn’t get to see Sam and Graham getting bagpipe lessons. I’ve heard they’re a fiendishly difficult instrument to learn, but I bet those boys would have given it a proper (and hilarious) go.

Julie: And it would give us the best gifs to use for future references. But leave it to Men in Kilts to make me fall in love* with bagpipes when they introduced us to this Hot Scot: 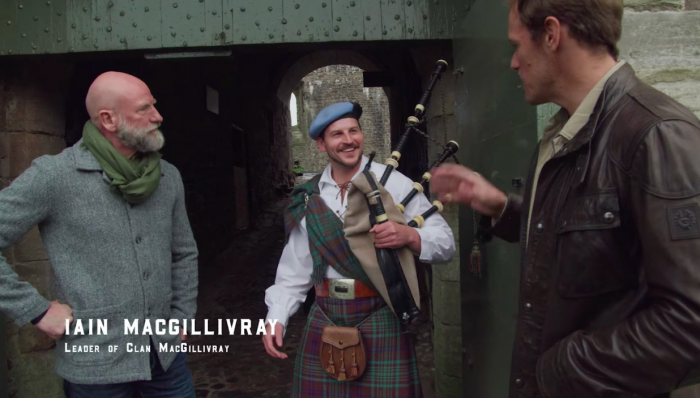 Forget your Lord John Grey. I’m now petitioning for Iain MacGillivray to have his own Outlander spinoff.

Janna: WHERE were all the young, attractive, bagpipe-playing clan chiefs when I was a single lass touring Scotland? I never would have left!

Julie: We also got to see a bagpiper mutiny when Sam and Graham temporarily led the Glencorse Pipe Band. Their characters may have led men into battle, but the IRL men cannot lead bagpipers five feet down a street. Honestly, good call on having Sam and Graham take a backseat so the band could actually play, because this segment could have easily ventured into facetiousness.

Janna: Something that stood out for me in this section was the film locations. It was bittersweet seeing several places I’ve visited before; Castle Doune, Glencoe, Calton Hill (Where the Pipe Band played), and seeing footage of the Military Tattoo. I was going to attend the Tattoo for the first time this past August before Covid happened. You’d hate it, Julie. So. Many. Bagpipes.

*Julie would like everyone to know she still does not like the bagpipes, but she would gladly sacrifice her eardrums for Iain.

Julie: Mark this episode, Janna! We finally meet a Scottish woman who isn’t an extra in an Outlander clip!

Janna: Would it have been awesome to have a female expert from a predominantly male-dominated career field like food, drink or sports? Yes. Am I jazzed that we got to meet the young, accomplished, incredibly coordinated and charming Cerys Jones? ABSOLUTELY. GIRL POWER.

Julie: When Shakespeare wrote, “Though she be but little, she is fierce,” I think he was definitely talking about Cerys Jones. Did you see her calf muscles when she danced? Those are some workout goals. Take note, Peakers. Forget your squats. Start incorporating more sword dancing.

Janna: As a history nerd and collector of obscure facts, I love the little historical tidbits the show includes, like how in war soldiers would use the sword dancing as a way to stay in shape (and warm through the long cold nights as a POW). More of that, please!

Julie: Watching Sam and Graham try to master this was like watching your child’s first ballet recital. It’s either cringingly adorable or adorably cringey. And if the superstition about touching the sword is true – touch the sword, die in battle – Sam and Graham are not only dead in battle, they pretty much killed their past and future selves as well.

Janna: Yeah, sorry guys. You are definitely doomed. But as the American novelist Willard Motley once wrote, “Live Fast, Die Young, and Leave a Good-looking Corpse”, and in those snazzy Tuxedo Kilts, they definitely will.

Julie: As a former band nerd (flute for eight years, baby), I was really looking forward to this episode because dance and music are my love language. But can we just take a moment to talk about the absolute random conversations between Graham and Sam in between segments? We went from a Flintstones sing-a-long to Graham doing a pretty spot on spaghetti western accent (and Sam not even attempting). It’s those non sequiturs that you would definitely see on an actual road trip.

Janna: I would pay way, way more than $5.99 a month to get all the unedited bonus footage from the camper van. Also, in every episode I am continually reminded that Graham sounds exactly like Daniel Craig.

Let the Ceilidh Hit the Floor

Julie: The men end their exploration of Scottish song and dance with a ceilidh gathering that made me long for the days when we could be in the same room with people without the six feet separation and maskne. I can honestly say their Scottish version of “Cha Cha Slide” really slaps. Bring on the fanmade videos of this segment put to any group dance song you would find at a wedding.

Janna: I’m a terrible dancer, Sam and Graham have nothing on my complete lack of coordination, but ceilidhs look like a damn fun time. Throw in food-and just the right amount of Tennent’s lager-and I will gladly make a fool of myself. Does Groupon run specials on Ceilidh tickets? Because that is going on the itinerary for my next trip.

Julie: I swear that this moment…

Has the same energy as this one.

I will fight anyone who tells me otherwise.

Janna: That first gif is Peak Sam Heughan Energy™ for me.

Janna: Bagpipes! Dancing! Ladies! A metaphorical sgian dbhu to my heart because it made me yearn for Scotland so hard! Another great episode in the books. Starz overlords, if you’re reading this, please renew for a second season. And if Chief Iain of Clan MacGillivray wanted to come back and serenade us with his gorgeous face bagpiping…I’d be fine with that.

Julie: We got a hot Scot playing the bagpipes, Sam and Graham attempting to dance and sing (Emphasis on attempting; A for effort, guys!), sword dancing led by a woman, and a party! I actually wish we could have had more of these moments and less Outlander clips. While it’s nice to take the occasional walk down Outlander memory lane, Sam and Graham’s banter, off-scripted moments, and interaction with their guests is all we really need for this show because it’s that good.

Janna: I agree the show relies a little too hard on Outlander clips, but that’s because the show is so strong on its own that it doesn’t need the Outlander connection. So far they’ve made every aspect of Scottish culture look appealing and exciting; I dare say even more than Outlander does. Shhh, nobody tell Diana!

Julie: Men in Kilts, Sam and Graham could visit a McDonald’s bathroom, and we’d still love it! In other words, trust that your audience is going to watch no matter what.

Is it a shock to anyone who we’re about to announce? The winner of this episode is Iain MacGillivray. Why? Because now that we know that Iain MacGillivray exists, our worlds have become brighter and noisier, and we’d have it no other way. The Women in Sweats are now devoted to becoming Iain stans, and let’s just say that our text messages to each other have quickly morphed into one long innuendo about his bagpipes and inquiries about what is under his kilt. And for a brief moment, he made Julie love bagpipe music.

With great power, comes great responsibility, Iain. Use it wisely.

The Cool Table@thecool_table
1.0K Following 1.0K Followers
@jamiesrule @jamadoria @coolstorymere I know you know this, but I"ve had pixie cuts off and on since 1997 and m*n h… https://t.co/VsXyyN7PpC
1 hour ago
4
@LSULeslie @schizoreads I’ve legit never even heard of this
47 mins ago
@chels__ebooks Yes! Josh O’Connor supremacy! I watched this right after I got obsessed with The Durrells ❤️❤️❤️
46 mins ago
@maria_gb75 Keep him
45 mins ago
@baskinsuns AGREED. I love love loved that as a kid (and vowed to be able to do it so someone would love me)
45 mins ago
1
Archives
Uncategorized