Bachelor Nation Is in a Tailspin, but Matt James Is Still Looking for Love

Sing me a song of Droughtlander lasting too long…

Thanks to a global pandemic, production on the show’s sixth season halted and forced fans to experience one of the driest Droughtlanders yet. Just when you exhausted all fan-created videos of Jamie and Claire’s love story put to Arianna Grande’s “God is a Woman,” Starz decided you suffered enough and announced that production of the next season had finally started. The masks! The costumes! The shiplap house that Joanna Gaines would murder for! A stylized social media announcement, however, isn’t enough to hold fans over for who knows how long, and Starz knows that we’re all desperate and greedy bitches.

Enter Sam Heughan and Graham McTavish’s documentary travel series, Men in Kilts: A Roadtrip with Sam and Graham, premiering just in time to whet your Outlander appetite and make all other Valentine’s Day presents look like complete gutter trash.

Since this is a buddy road trip, I decided to take a cue from Sam and Graham and invited Janna, who’s been to Scotland three times compared to my none, to accompany me on my viewer journey. The show’s premise also inspired us to embrace our own culture.

Men in Kilts, meet the Women in Sweats.

Our Thoughts on Men in Kilts Episode 101: Food and Drink

Julie: So Janna, we’re calling this Women in Sweats because quite honestly, ever since COVID, I have no idea how buttons and zippers work anymore.

Janna: I’m pretty sure if I tried to wear denim at this point my body would revolt.

Julie: I have never been to Scotland before, and really, my only knowledge of it is from what I’ve gathered from watching Outlander. You, on the other hand, are kind of an expert.

Janna: Scotland is my happy place; I’ve been three times. I was supposed to go again last year too, but…thanks, Covid. When I’m feeling dramatic, I like to imagine that my soul roamed in Scotland before the dawn of man. I’ve also read a great deal of Scottish romance novels. So yeah, I’d say I’m kind of an expert.

Julie: Damn, girl. Three times? Are you sure you’re not in this show?

Peeking Under the Kilt? 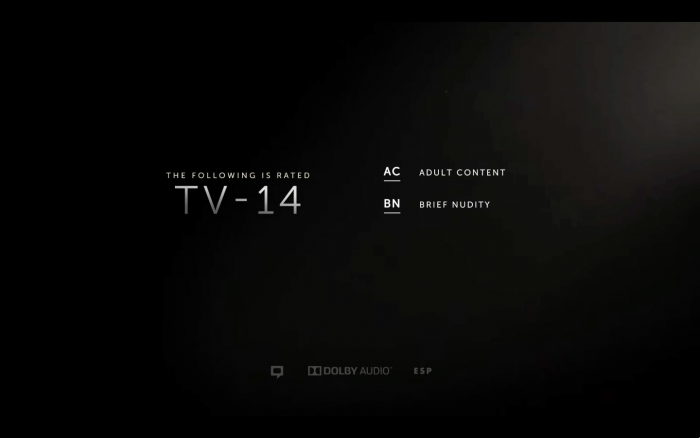 Julie: You know the words you’ll never see in front of a Rick Steves’ Europe? “Brief nudity.” Sam and Graham’s travel show? Bring on the naked while exploring the Scottish highlands. You just know that “brief nudity” isn’t because of Sam or Graham, or even some hot Scottish rugby players. It’s going to be some old Scotsman flippin’ up his kilt to show all of us his flabby, white ass.

Julie: I know everyone will say the real stars of this show are Sam and Graham, or even Scotland itself. But they’re wrong. 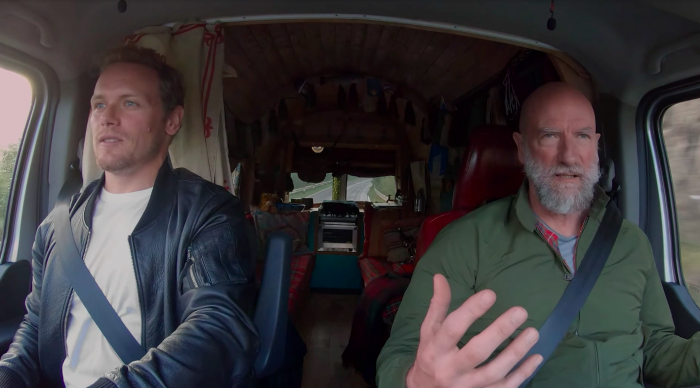 This van and its interior need top billing. It’s an entire mood. The matching tartan beds; the knickknacks that drill into your brain just in case you forgot that yes, they’re in Scotland; the tasseled garland probably left over from Bree and Roger’s wedding. I’m pretty certain they’re going for a Scottish shaggin’ wagon, and I don’t hate it.

Janna: Yeah we’re gonna need more van footage. And good for Sam; I’ve seen the size of Scottish country roads and you wouldn’t catch me driving anything larger than a itty bitty smart car over there.

Julie: Here’s what Men in Kilts taught me about Scottish cuisine and dining:

Janna: This episode reminded me that most of the seafood I’ve eaten in Scotland has been deep fried. I see now the egregious error of my ways! Next time I’m there I will be tracking down Tom Kitchin and Tony Singh and asking for Men in Kilts special, because DAYUM. Graham said his taste buds were dancing and I want that for myself.

Julie: On a serious note, I do appreciate how the show tries features Scottish POCs by having the actors visit chef Tony Singh. I hope we see this continue in other episodes. Scottish culture doesn’t just belong to white men in kilts.

Graham: If he [chef Tom Kitchin] was named Tom Plumber, he would…

Sam: Be an accountant.

Julie: Just when you thought you knew everything about Sam Heughan, and anything you didn’t know, you just filled in, bad dad jokes was not on my Sam bingo card.

Graham: We head to fish….The things we’re fishing for are…

Sam: Compliments, mostly about my driving. 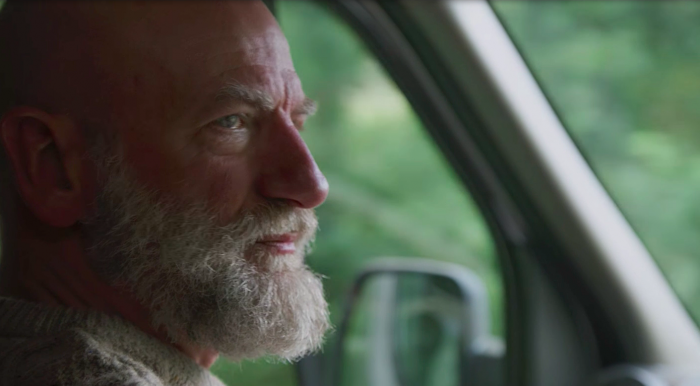 Julie: This look from Graham speaks for me.

Janna: And we haven’t even gotten to Sam’s “horn” jokes.

The Spirits of Scotland

Julie: I love how the discussion about Scotland’s love of all things alcohol opens up with Graham talking to Sam about how “his character” seems to overindulge, and you just feel that he’s trying to start an intervention for Sam. “Your character’s name is Sam Heughan. Please accept this gift of intervention.”

Janna: That drinking montage from Outlander was *chef’s kiss*.  As an avid Scotch drinker, I was particularly interested in this portion of the episode, and Laphroaig is one of my favorites. But frankly, I’m a little upset that I wasn’t also offered the opportunity to frolic in drying barley as well. It looked therapeutic. 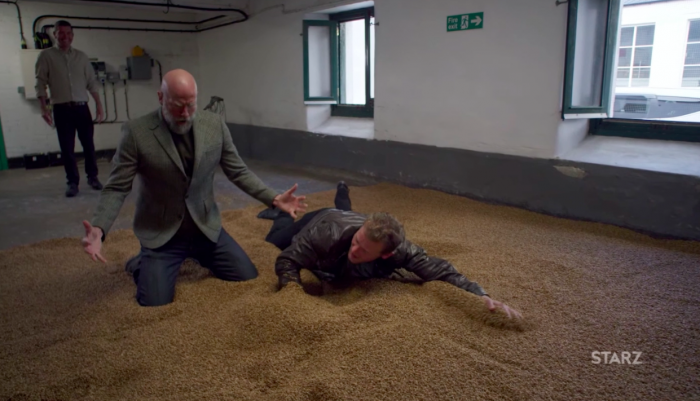 Julie: Well, I think we now know how COVID started in Scotland.

Janna: At least they weren’t wearing kilts for this part.

The Romantic Comedy We Never Knew We Needed 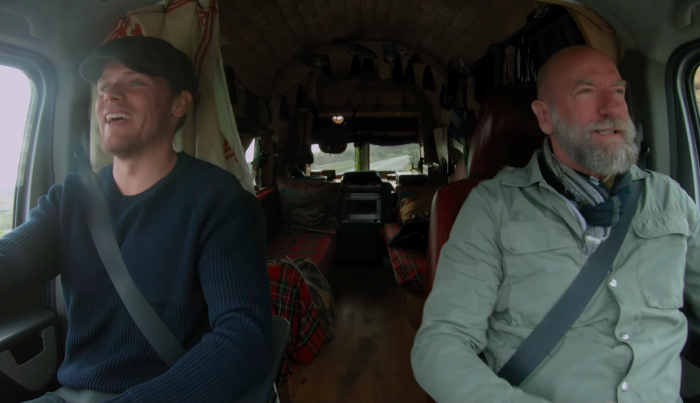 Julie: Call me crazy, but I think these two kids are going to fall madly in love. I know that people shipped Sam and Cait, but I think we need to ship Sam and Graham. Ship name? SamHam.

Julie: They had good chemistry and complimented each other well. When one was silly (Sam), the other was the rest of us (Graham). They’re definitely a well-matched pair, and I honestly could see them on a road-trip together.

Julie: I’m going to say it: Men in Kilts is pure joy, and honestly we need it right now and not just because of Droughtlander. It was lighthearted without venturing too much into frivolous at the same time reverent and insightful about the Scottish culture and land. Plus, Sam and Graham’s banter had me grinning like a proud mommy at a dance recital. It was that precious.

Janna: Men in Kilts absolutely hits the Droughtlander spot. It’s fun, educational, and makes you feel like you’ve been transported to Scotland (without needing a mandatory hotel quarantine first). I’m excited to see all the different aspects of Scotland that Sam and Graham are about to show us.

Julie: And I know this is blasphemy, but this made me want to visit Scotland more than Outlander ever did.

Janna: Hey, whatever gets you there!

Julie: My only one complaint (and it’s trite and the title is tongue-in-cheek, I know) is that for a show called Men in Kilts, there wasn’t a lot of kilts. It was more like, Sam in Skinny Jeans. But I get it, Men in Kilts has a better cadence and honestly, it could be worse. It could be Clansland.

Each week, Janna and I will pick the winner of the episode – the standout who owned the episode and made us glued to our screens for thirty minutes. This week’s winner of episode 101? The land itself, Scotland. From buckets of shrimp to warehouses of drying barley, Scotland was serving up a delicious bounty for thirty straight minutes. Although we’re sure Sam and Graham’s taste buds also felt like they were winning. Hashtag jealous.

You just know that right now, Outlander fans are booking their 2022 trips and making reservations at The Kitchin. Post COVID congratulations, Scotland. Have fun Scrooge McDuck swimming in all that tourism money.

What did you think of the premiere of Men in Kilts? Give us your hot take! Need more Outlander? We’ve got just what you need to get through Droughlander!

The Cool Table@thecool_table
1.0K Following 1.0K Followers
RT @BlessAmysHeart: And @bethorne created a reading list/reference guide she mentions during the show. I say Beth is the brains, and I’m th…
15 hours ago
1
RT @BlessAmysHeart: Want to know what I believe now after leaving the #Evangelical church? Check out the latest episode of our #Exvangelica…
15 hours ago
2
@chels__ebooks if you can't HEAR and SEE it, you aren't fit to lick booktok's boots
19 hours ago
4
Archives
Entertainment, TV

Bachelor Nation Is in a Tailspin, but Matt James Is Still Looking for Love