Welcome back, nerds. Outlander is officially airing again on Starz, and episode 501, “The Fiery Cross” aired early with a romance-heavy episode that included Bree and Roger’s wedding and the return of Jamie Fraser, hot Scot. While we plan to break it all down with our live recap show, Hangoutlander, tomorrow night, I thought I would highlight my top moments of the episode first. A primer for the premiere, if you will.

As an opener to the season, this episode set out to remind us of a few important things: Bree and Roger are (Apparently) Made For Each Other, Jamie and Murtagh go way back, Stephen Bonnet is still alive, Claire can heal, Roger doesn’t plan to stay, and Jamie remains The Best. Some reminders are subtle (Lord John loves Jamie forever) and some are bludgeoned over the audience’s head by the writing (No, Roger is a good guy! Look at him tell his family matriarch to shove it up her hole!), but they all serve the same purpose: to wind up time into a neat bow of things that are going to happen to this clan really soon.

Fans have almost universally been pleased with the addition of Murtagh back into Jamie’s story. While there has been much speculation that he would take place of Duncan Innes as husband to Jocasta (especially since they hooked up last season), that doesn’t seem to be the case. But bookending this episode with Murtagh down on one knee, pledging himself to young Jamie and then with Jamie falling to his knees after having to release Murtagh from that vow, was poignant. It gave Sam Heughan the opportunity to showcase how well he has melded into Jamie Fraser as well. 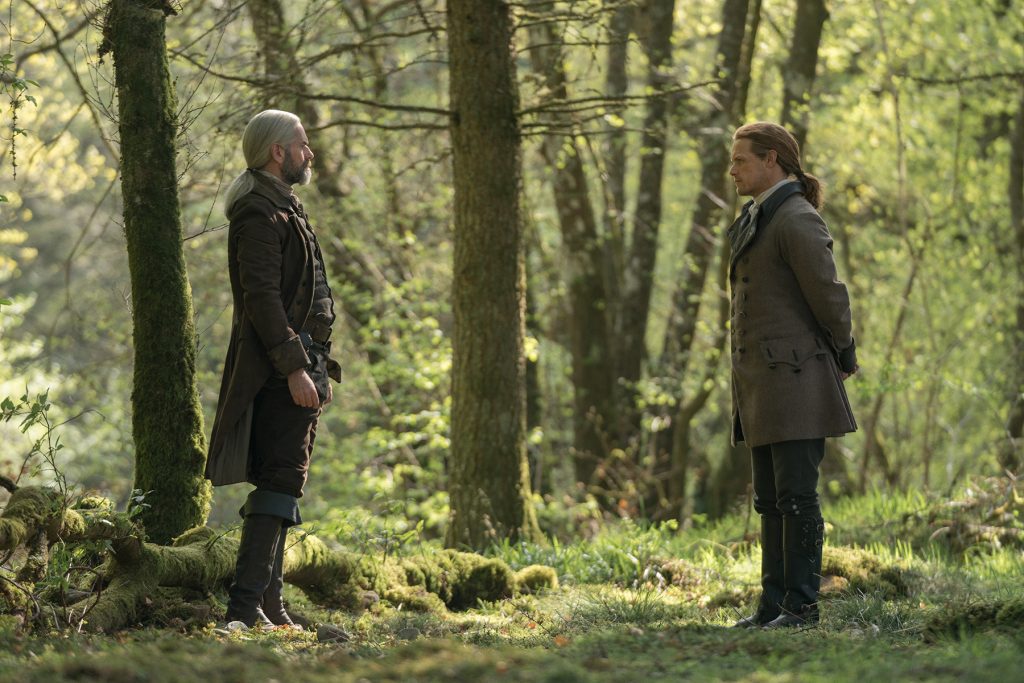 The Jamie Jumped Out

Speaking of Sam Heughan as Jamie Fraser, if there were awards for just seamlessly embodying the form of a fictional character from page to screen, I’d like to nominate Sam for all of them. This episode highlighted exactly why we love Jamie: he is honorable and trustworthy, not just family-oriented but family-obsessed, and he’s capable of calling on all of his many fine attributes when needed.

There were the small moments: Jamie calling on his humor to tell a real truth to Roger about his lack of faith in him. Jamie being sweetly attentive to small, 20th century details that his daughter apparently asked for but still being frustrated that it’s not quite the Catholic wedding he envisioned. Sam Heughan tapping his fingers in thoughtfulness and shrugging his shoulders in discomfort.

Then there were the bigger moments: Of course, Jamie in his full Highland regalia calling the men of the Ridge to be the Clan of his heart was THE moment. But there were bigger moments for me: The simple ease with which Jamie and Claire have established their home and family here, their bond, their heart for one another, and the precious love they have for their grandson (JAMIE IS FINALLY HOLDING WEE JEM!). When we get the Jamie we know and love, we are often willing to forgive the episode anything.

Likewise, when the writers get Claire right, the episode improves 200%. While we absolutely didn’t get enough Claire in this episode, (she’s relegated to a sidepiece to the larger story of Bree’s marriage and Jamie’s militia orders) what we do get was exciting to see. She’s a mother getting her daughter ready for a wedding she’d never thought she’d see, babysitting a grandson she’d never expected to get to hold, conducting doctor’s visits in a surgery that no one in the backcountry of the 18th century Carolinas should have ever expected to have (are those cubbies??). But she’s content and happy and whole, and she (and we) deserve it.

I don’t want to hate Roger. Truly, I don’t. I didn’t like him at all last season, and having just re-read The Fiery Cross, I didn’t like him much in that either. But, he stepped up in this episode at certain moments, and if he keeps it up … that’s a big if … not being in his head might make me forgive him some of the more egregious nonsense he’s been up to. The writers certainly want us to forgive him (hence using Claire as a mouthpiece for how much he just loves Brianna), but I still want him to earn it. He’s on his way. 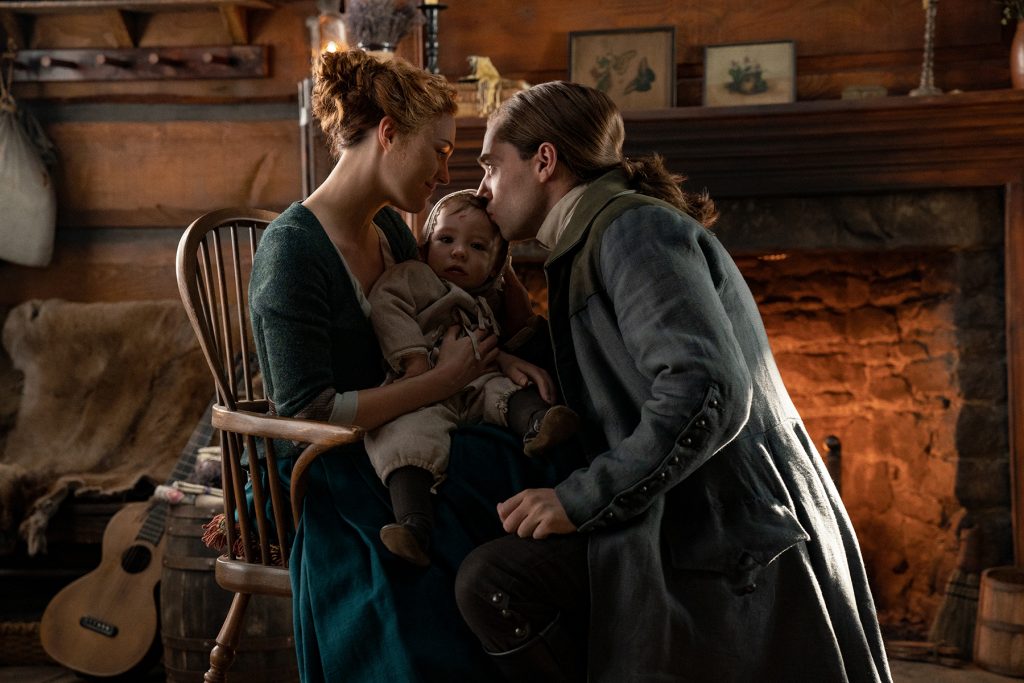 I know that’s not the spin-off that’s in talks right now, but Cesar Domboy and Lauren Lyle remain the most natural and charismatic of actors on the show, turning background characters into ones I love to see onscreen and need more of. MORE MARSALI PLZ.

I realize watching the first scene that I want a very different type of show. This oftentimes feels like something out of the playbook for Sexy Dr. Quinn. It’s melodrama. It’s an idealized version of this era, these people. The grit, the darkness, the danger even have been left behind in Scotland and in season 2. There is no squalor. No animal tack on the windows. The wedding is a modern event instead of a simple stand up with a priest.

Fans have understandably been making jokes about the Big House because something that large and that turned out is truly untenable. They are supposed to be poor farmers, struggling and brewing whisky to make ends meet. The sex montage set to L.O.V.E. was uncomfortable at least and laughable at best. We flashed from a young couple having sex, to an old one, to Lord John sitting alone on a log. It’s ridiculous.

And so, for all the things I love about it, I recognize that my love for the show falls firmly on my love for the source material and the ways in which it mirrors it.  When it doesn’t, I feel pulled out of it completely. Here’s hoping we get more squalor in season five.

Want to talk more about the episode? Because we have WAY more to say! Join us Monday night, Feb 17th at 8pmEST LIVE on YouTube to talk all things Outlander Episode 501 “The Fiery Cross.” OMG I didn’t even mention the cross yet!

And check out our red carpet interviews with the cast while you are waiting!

The Cool Table Has a Podcast Now!@thecool_table
1.0K Following 987 Followers
Who's watching with me? Gonna start at 1:00pm CST #HarryandMeghanNetflix https://t.co/Wz5n31uLCR
3 hours ago
3
@deannareads I'll go down with the ship that Bloodmarked didnt have a fair shake bc of its release date
3 hours ago
I made an aesthetic thing and it took a minute and it's doing TERRIBLY. LOL FOREVER https://t.co/7nYkJ9vMo0
3 hours ago
@baskinsuns @pagemelt I've never seen any good discussions or good insight come out of bookstagram. They almost alw… https://t.co/51anLn7rxo
3 hours ago
2
Can’t wait https://t.co/dMqJEWhOVR
5 hours ago
2
Archives
Entertainment, TV

Love is Blind is Your Next Binge Watch