Sometimes The Bachelor is about Matt James finding love. Other times it’s about watching one of his girlfriends stop a skydiving landing with her face all while the families of the four women he’s dating quarantine in a resort together.

Only Serena, Bri, Michelle, and Rachael remain in the quest for the one ring to rule them all. Bring on the hometown dates. 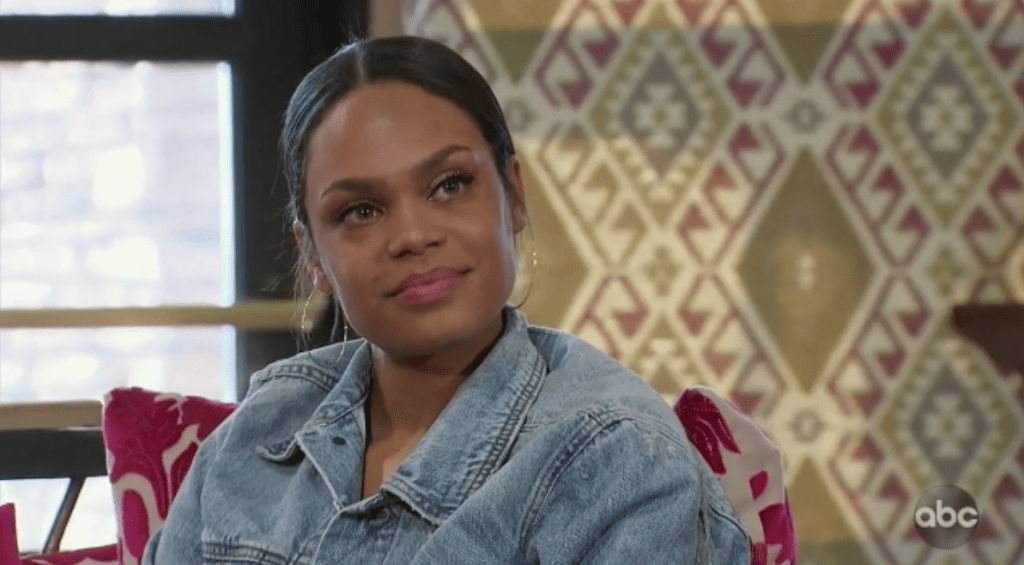 The first of the hometown dates went to 27-year-old teacher, Michelle from Minnesota. Michelle has a quiet confidence that brings out the most comfortable side of Matt. She also happens to look like the love child of Rihanna and Michelle Obama’s biceps. It’s a good look.

Thanks to covid ruining everything good in this world, she couldn’t actually take Matt home to Minnesota. But she could bring Minnesota to him – or at least she could bring her students in via a zoom meeting projected on a projector screen. Her cute elementary-age students grilled Matt with questions like, “How many girlfriends do you have?” and “Are you going to have babies?”  Tell the people what they want to know, Matt! 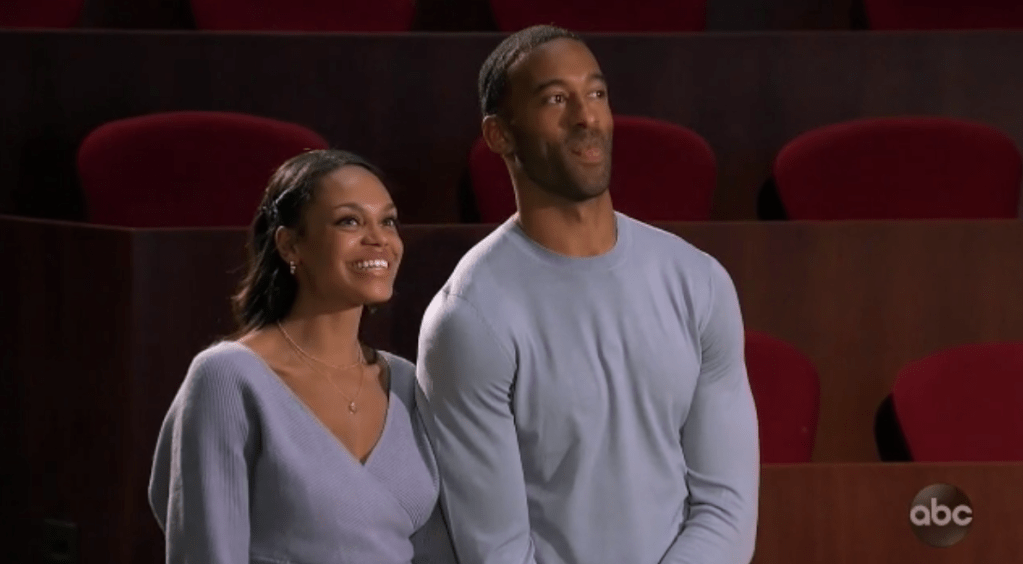 That night, Michelle introduced Matt to her parents who had flown in and quarantined for the occasion. Her parents took one look at her and were like, “Oh, you’ve got it bad, girl.” They were sweet and supportive, which gave Michelle the confidence to tell Matt that she’s falling in love with him. He smiled and kissed her, but didn’t say the words – or any words – back. 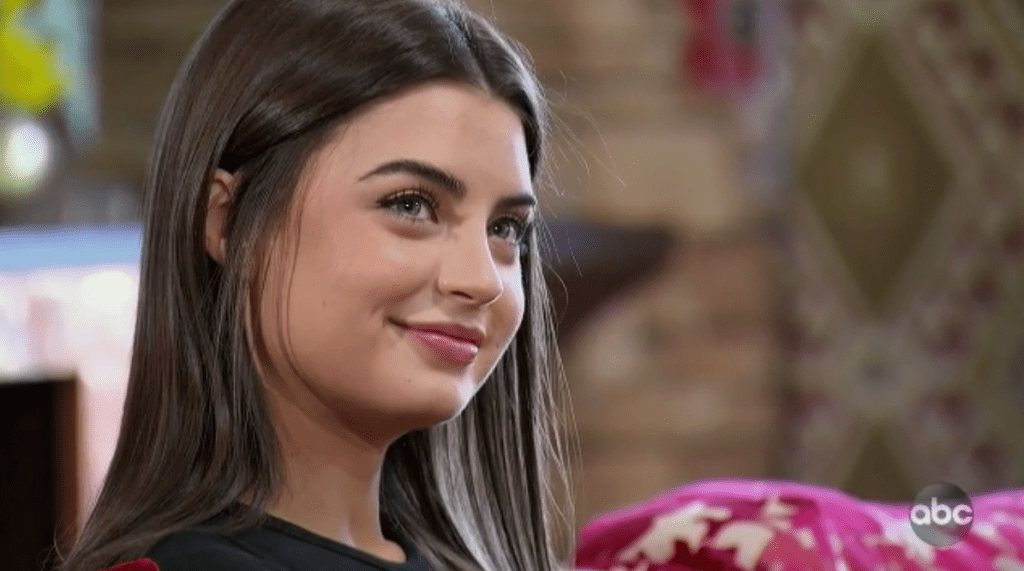 Rachael (24, graphic designer) and Matt have tons of physical chemistry. You can see it sizzling between them whether they’re driving in a roadster or strapped to the front of a couple of sketchy sky diving instructors before jumping out of a plane. They’re into each other.

Then Rachael’s instructor screwed the skydiving landing and slammed Rachael face-first into the ground. It looked extremely painful, but at least it’s a way cooler story than Peter Webber hitting his head on a golf cart. For Matt, the fear of Rachael being seriously injured triggered a realization that he really likes her. Not just likes her face, which had to have been bruised, but actually cares if she dies. Must be love. 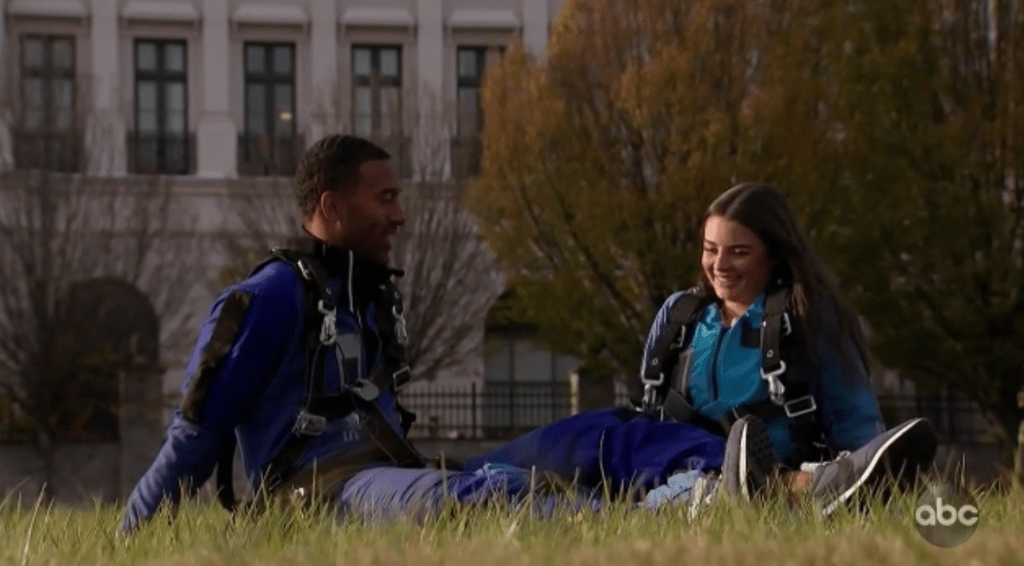 Despite telling Rachael’s dad that he’s falling in love, Matt did not ask for his blessing to propose. Is that the first crack in Rachael’s very confident facade that I see or is all of the makeup she caked on her facial contusions melting off? 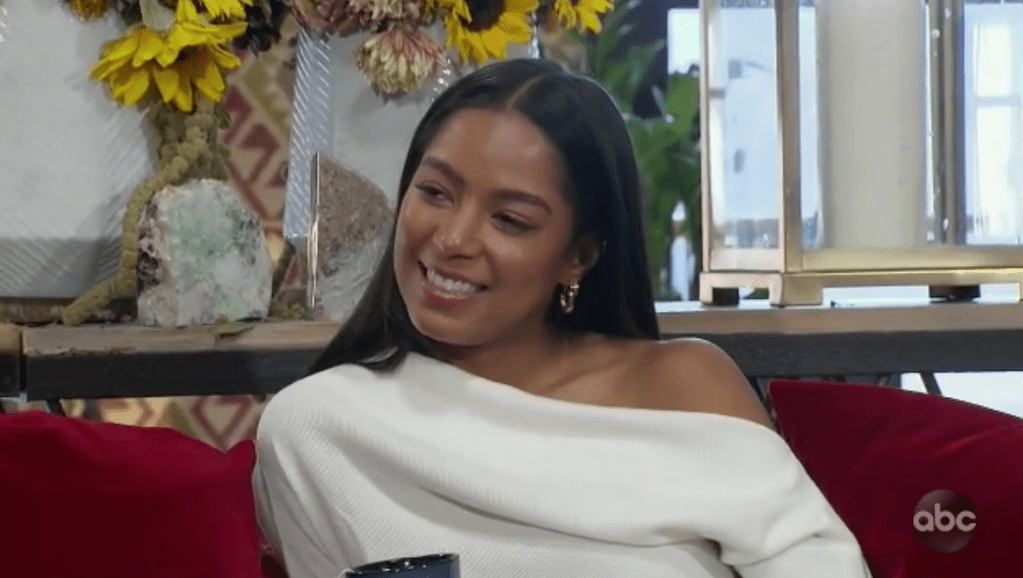 Bri (24, communications manager) was out for redemption when she took Matt off-roading in a Jeep as a nod to their first date when he rolled their ATV. She drove them through mud and rocks and earned every penny of that very obvious Jeep ad campaign.

They stopped for a picnic where she admitted being nervous to introduce Matt to her non-traditional family. As the daughter of a teen mom, she had never felt like she fits into the standard mold, but Matt can relate to her “broken” family. There was nothing to worry about though because everything went well when he met her best friend, mom, and infant sister. 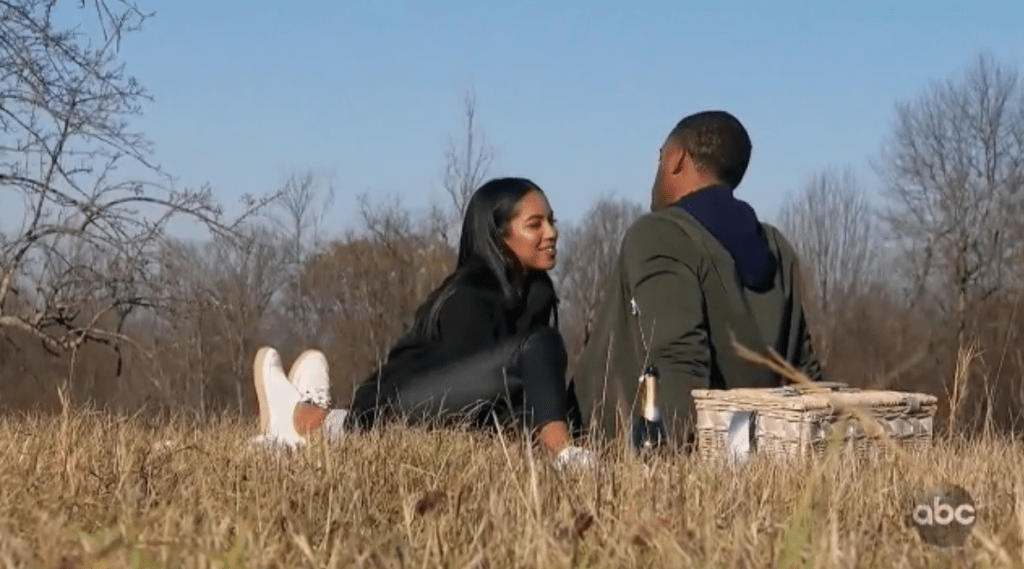 By the end of the night, Bri was fully convinced that the process is working for her. She told him that she’s falling in love with him and, once again, he smiled and said, “Thank you.” Ouch.

For the last of the hometown dates, Serena (22, publicist) quizzed Matt on all things Canadian. The Toronto native showed him maps, fed him poutine, and played hockey while laughing hysterically from the friend-zone. Meanwhile, Matt looked at her with hearts in his eyes and cartoon cupids around his head. He really likes her, and she’s just not that sure. It’s extremely obvious and the fact that Matt doesn’t notice explains a lot about his whole journey. 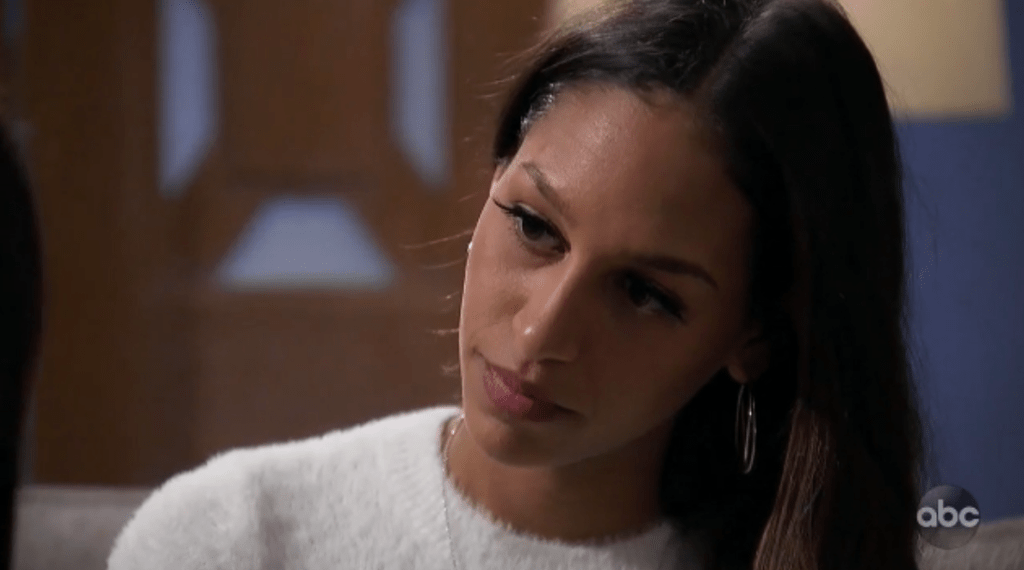 That night, Serena was prepared to let herself be talked into loving Matt by her family. Too bad, so sad Serena, because even your parents and sister can tell you’re not feeling it. Her sister told her, “You don’t seem smitten,” and I was like, “I know, right?”

At the end of the date, Serena was honest with Matt about her doubts, but he wasn’t ready to hear it. In fact, all it did was make him want to fight for her even more.

It turns out that Matt isn’t as oblivious as he seemed. He was feeling shaken by his last conversation with Serena so he surprised her at her hotel room to talk things out. He told her that he has spent more time with her than any of the other women because he really sees a future with her. She was like, “Yeah, you’re perfect for me on paper, but I’m not feeling it.” Okay, she was more gentle than that, but that’s the gist. He’s not her person. 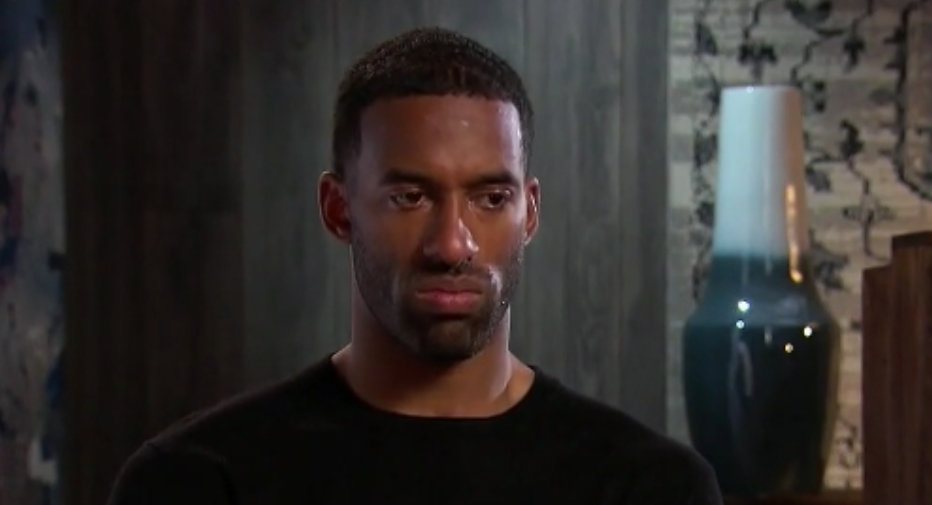 Matt got a sad puppy dog look and said, “It just stinks. I don’t know.”

Since Serena self-eliminated, the rose ceremony was pretty low-stakes. It’s not like Matt was ever going to leave one of the upcoming fantasy suites empty. However, he was still pretty shaken up, so he asked Michelle, Rachel, and Bri to realize that if they accept a rose from him, it’s because they see a future together. Obviously, they all three did and the fantasy suite trio was officially set. 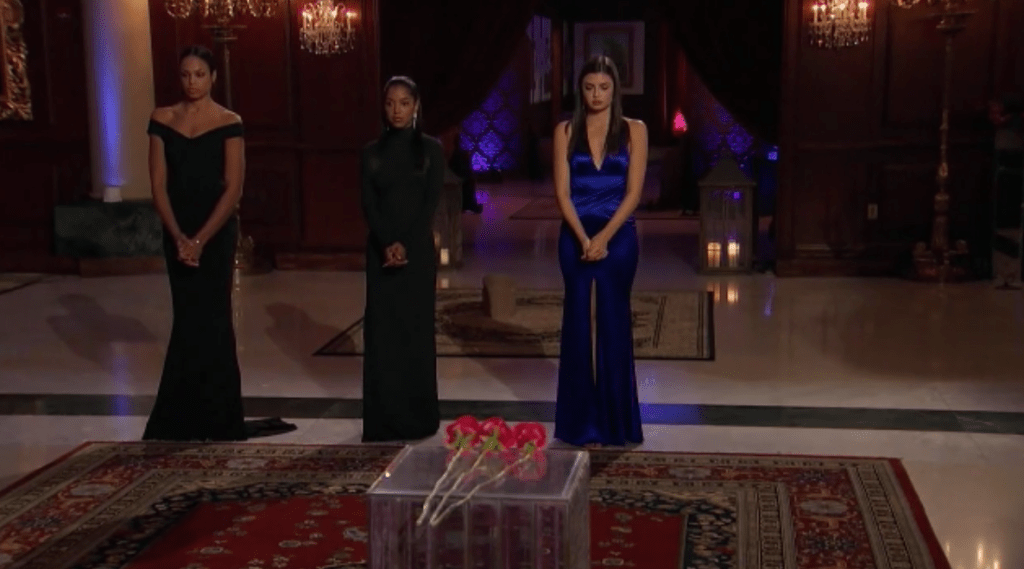 Next week we will finally get to see all of our favorite mean girls again at the Women Tell All special. It looks like a mess, but at least Matt shows up in a full beard. Then, the week after that will be fantasy suites. My body is ready.

The Cool Table@thecool_table
1.0K Following 1.0K Followers
@jamiesrule @jamadoria @coolstorymere I know you know this, but I"ve had pixie cuts off and on since 1997 and m*n h… https://t.co/VsXyyN7PpC
3 hours ago
4
@LSULeslie @schizoreads I’ve legit never even heard of this
2 hours ago
@chels__ebooks Yes! Josh O’Connor supremacy! I watched this right after I got obsessed with The Durrells ❤️❤️❤️
2 hours ago
@maria_gb75 Keep him
2 hours ago
@baskinsuns AGREED. I love love loved that as a kid (and vowed to be able to do it so someone would love me)
2 hours ago
1
Archives
Entertainment, Outlander, TV

Women in Sweats: Our Thoughts on Men in Kilts Episode 102