With Comic-Con @HOME coming to us at, well, home this year, we will finally learn the answer to the age-old question: If you don’t get up at zero dark o’clock to stand in line for 4 hours dressed in an itchy shield maiden costume, do you even Vikings panel (bro)? 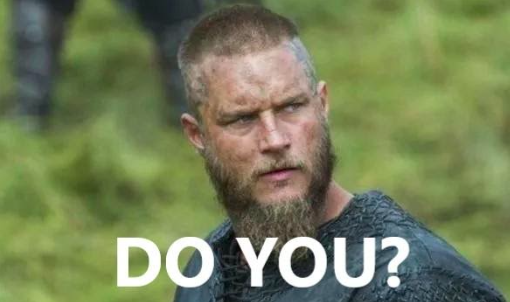 I confess to being a little dubious that I could achieve the heady experience of past Vikings panels without having to battle against fellow fans wielding foam cosplay swords to claim 4th row seats vacated by departing Teen Titans GO! fans. Let’s look at the pros/cons of the new format:

So, while not an ideal substitute for the real thing, it is great to be able to hang with the cast one last time! Here are my last Top Vikings Panel Feels:

As with every panel to date, the love and respect the cast has for one another shines through the whole time. Travis Fimmel (Ragnar), Kathryn Winnick (Lagertha), Clive Standen (Rollo), Alexander Ludwig (Bjorn), and Jordan Patrick Smith (Ubbe) were as bummed as we are about not being able to be together in person, but it was great to see the old gang all together again (save Gustaf Skarsgard [Floki])! One good thing about the quarantine is that no one could claim to be too busy to show up!

The cast also has such a genuine love for their characters and the show. My favorite anecdote was about how Gustaf lead a mini (very polite!) coup against a director of an early season episode because he was portraying a Viking beheading victim in a dishonorable way. Even when I’ve disagreed on the show’s direction, I’ve never doubted the team’s commitment to the Vikings-verse!

Another benefit of the taped format is that it allowed for show montages to be played during the discussion. All the battle sequences, fraternal conflict, bed hopping, and bloodshed  – we have come so far in six seasons! It makes me want to binge the whole thing again!

One of the universal constants of the Vikings panels is Travis’s super-understated, borderline taciturn persona in contrast to the merry joker he obviously is on set. Through the entire panel, Michael Hirst and the cast chronicled the genius contributions Travis made to the show – like having Ragnar and Rollo duke it out with fists in France, Ragnar staying nearly silent during the last episode of season 2, and Ragnar’s poignant goodbye to his dead daughter – while a trucker hat-clad Travis mumbled awkward bits of wisdom like a cross between Silent Bob and Dale Gribble from King of the Hill. Never change, Travis. Never change.

Most of all, the panel rekindled my love for the show!

To be honest, I started to drift away from the show after it did Rollo so dirty in his final arc, so I’ve only watched through the very beginning of season 6. But I learned through the panel that Lagertha died epically in the first part of the season, which I want to see! And Alexander Ludwig accidentally dropped a spoiler (beeped out – wah) during a question about Bjorn’s true love that I need to know more about! And Ubbe will be breaking free of Kattegatt to have his own adventures abroad – tell me more!!!!!!

As this is lasties for Vikings, show runner Michael Hirst assures us that the characters’ fates are in the hands of the gods, and that the show wraps up in a “proper and meaningful end.” I AM IN!

As always, we were left with a teaser for the next season. Watch it here:

For me (and many other fans) Vikings WAS Comic-Con, and I wish we could have said goodbye in person. Thank you all for the great times Vikings folks – WE WILL MISS YOU!

All Viking images courtesy of The History Channel.

Our Guest Contributor for this post is Katy. Katy once hugged Clive Standen at a Comic Con party and has the GIF to prove it.

The Cool Table@thecool_table
1.0K Following 1.0K Followers
@jamiesrule @jamadoria @coolstorymere I know you know this, but I"ve had pixie cuts off and on since 1997 and m*n h… https://t.co/VsXyyN7PpC
2 hours ago
4
@LSULeslie @schizoreads I’ve legit never even heard of this
1 hour ago
@chels__ebooks Yes! Josh O’Connor supremacy! I watched this right after I got obsessed with The Durrells ❤️❤️❤️
1 hour ago
@maria_gb75 Keep him
1 hour ago
@baskinsuns AGREED. I love love loved that as a kid (and vowed to be able to do it so someone would love me)
1 hour ago
1
Archives
Amazon Prime, Comic Con, Entertainment

Jake Johnson Will Always be the Internet Husband We Need