The eternal Austen debate among neophytes is Firth vs McFadyen: Who is the Better Darcy?? And although I’ve gone there once before, I will tell you right now: there isn’t a Darcy in living memory that compares to a single Captain Wentworth. And there the debate should end.

That’s right. I said it. Captain Frederick Wentworth is a better leading man, a better romantic hero, a better character than Fitzwilliam Darcy. I will grant you that, narratively, Pride and Prejudice is a better novel, but Persuasion remains my favorite. That doesn’t mean that Persuasion is immune to some of the same debates that P&P adaptations also face. The two popular versions of the book on screen are much like P&P: one came out in the mid-90s and stars actors we associate with their much older roles in the Harry Potter franchise. And the other came out in 2007, is shorter and therefore supposed to be more accessible because it stars hotter people.

I’m assuming this debate rages on between people who like to look at beautiful folks and think there is nothing better than Tobias Menzies’ laugh lines (I don’t know who those people could possibly be *AHEM*) and those who like movies based on awesome novels to make sense, follow the narrative arc of the book itself, and I don’t know … portray the climax of the story in a thoughtful and truthful manner.

Well, I’m here to settle it. The 1995 version of Persuasion starring Amanda Root and Ciaran Hinds is FAR SUPERIOR to the 2007 version with Sally Hawkins’ gaping maw and Rupert Penry-Jones (and my bae, Tobias Menzies). And here is why:

Anne Elliot is the sweetest and most delicate of the Austen heroines. She has very little of the wit of Elizabeth Bennet, none of the teenage idiocy of Catherine Morland, none of the ignorant arrogance of Emma Woodhouse. Anne is pure, sensitive, intelligent and humble. We see this entire story through her sweet, simple countenance, so let’s compare. 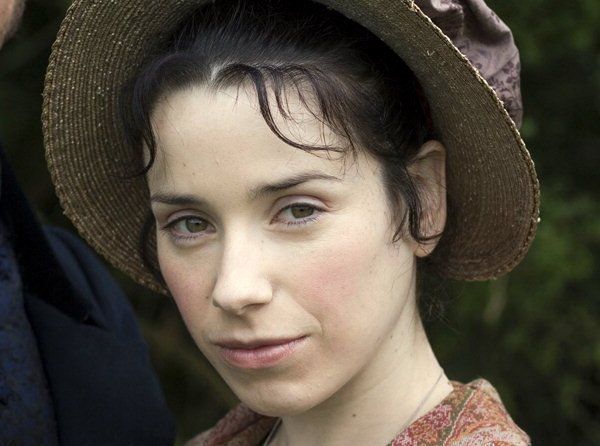 Who told her it was ok for her to constantly look directly at the camera? She is not Jim Halpert, and this is not a mockumentary. Stop breaking the fourth wall; it is distracting and terrible.

Why are you always smirking like you know how this story ends? Anne is in the midst of a totally devastating ex-has-returned-with-a-hotter-side-piece situation, and we are getting cut eyes from Sally!

I.Hate.Her.Hair. It is crunchy, it is severe, and it is doing Sally Hawkins (who is not unattractive) zero favors.

Sally Spittle: NO. The penultimate, romantic scene (apart from being terribly written) is gross. Instead of some romantic tension awaiting Wentworth kissing Anne, viewers are subjected to assuming that Wentworth is simply trying not to hurl at the copious amounts of saliva that are outside Anne’s panting orifice. I hate this scene. 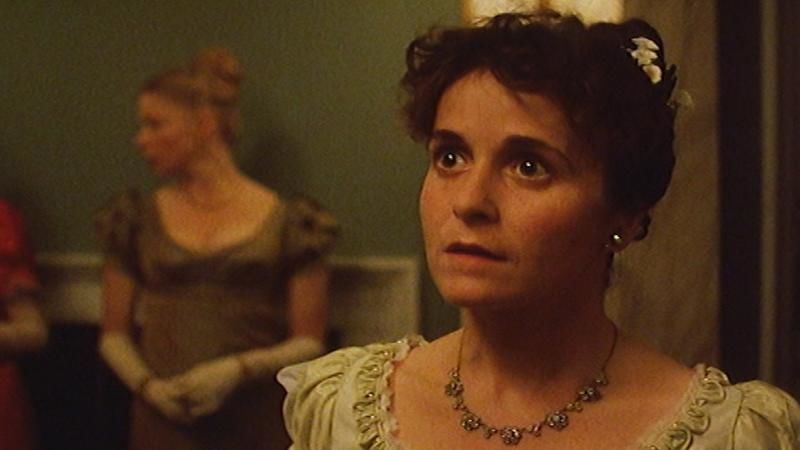 When she isn’t busy looking precious, she’s only busy being happy in spite of her horrible circumstances, finding some joy in playing the piano forte or amusing her neglected nephews, or she’s just tired of everyone else in her family’s shit. She never once SMIRKS at the CAMERA.

I.Love.Her.Hair. It’s soft and feminine and unassuming, just like Anne. It’s really hard to get Austen-era hair to look at all modern and attractive, and thankfully, when it needs to be, Amanda Root’s hair does it well.

Watch their sweet first kiss that retains all the tension that Wentworth and Anne are feeling on their own, and zero spittle.

Bonus: Angelic Anne at the piano. Perfection in candlelight. Of course Wentworth couldn’t keep his eyes off her.

The 95 version opens with a back and forth of sailors coming home with deference and respect for their admiral, and tenants and creditors begging a baronetcy for what they are owed. We immediately see the conflicting themes of the story. And then as the main story opens, we are introduced to the characters and the central tension (the Wentworth connection coming close to home) in a manner that makes sense. The simple storytelling that SHOWS what has happened is evident in Anne finding and gently holding a love letter, folded in the shape of a ship.

The 07 version opens with Anne running around the house like a housemaid, barely figuring out what she’s doing herself, much less elucidating things for the audience. It’s quick and clunky. The dialogue is spoken in quick fits and starts over one another. It’s not clear. It’s not particularly riveting either.

The tension of the narrative is presented so much better in the 95 version. We see Anne’s resilience as well as her heartbreak in small moments. And we also are privy to Wentworth’s awareness of her, his love of her in those same small perfect moments. We don’t have to be TOLD by some trumped up conversation with Harville that he loves her still; we already KNOW by watching.

My favorite moments in the 95 version barely register in the 07. When Anne sees him for the first time in 8 years, the first time since rejecting him, Amanda Root hangs onto the kitchen chair for support to keep standing. It says everything. After their walk, Wentworth surreptitiously gets Anne relief from the long walk she never wanted to take and has trudged through without complaint and without aid. It’s perfectly clear what’s going on here in this version. In the 07 one, it’s muddled. The import is lost. Ciaran Hinds plays his Wentworth as completely torn to even touch her! It is beyond.

The earlier movie gives us a deeper understanding of the key and secondary players. We see Anne’s influence in the lives of the Musgroves, Sophie’s love for her brother, Wentworth’s resentment, the elder Mr Elliot’s avarice and vanity, Elizabeth’s vicious treatment of Anne, even Louisa’s ability to be an actual contender for Wentworth’s affection. Both movies are fairly great at showing Mary’s silliness and young Mr Elliot’s capriciousness, but even considering that the 07 version doesn’t totally screw the pooch on Mary, in the 95 movie we are treated to the incomparable Sophie Thompson. She knows about being the lesser-beloved sister (she’s Emma Thompson’s younger sis), and she plays Mary Musgrove to perfection. 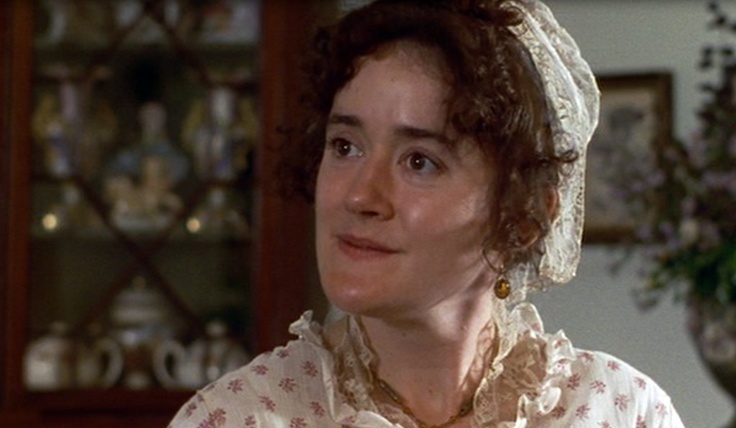 And as much as I love Tobias, in general and as Mr Elliot, Samuel West knows his part as well and does some great work in the earlier adaptation. I may concede to Tobias and the 07 version on this one point, but I can’t tell if that’s just my TObias showing.

Let’s get down to the whole reason anyone even bothers to watch the 2007 version of Persuasion: Rupert Penry-Jones as Captain Wentworth. It’s the whole reason we are having this debate in the first place because any objective viewing of the movies back to back would show that 1995 is far superior, story-wise. But nobody can deny, this Wentworth can get it:

But looks are not everything. Nor are they a mark against mid 90s era Ciaran Hinds who was only in his early 40s then. No, he doesn’t have that sweet boy band hair swoop in front, but I buy him much more as a war-torn sailor with a heartbroken chip on his shoulder.

Rupert is lovely, no doubt. He gets how torn up Wentworth is concerning Anne, how honor-bound he is. But there is a depth of feeling, a regret, an urgency that Ciaran brings to the character that boy-faced RPJ just doesn’t have.

I will fight anyone who prefers the later film’s ending to the earlier. All that running and that barely-a-conversation with Mrs. Smith (who can WALK AROUND OUTSIDE all of a sudden WHAT) that culminates in a sweaty, spitty, breathy confession and grody kiss. Then … boom, Kellynch. DUMB.
Half hope? More like HALF NOPE.

But this … the gorgeous letter. The open plaza in Bath with the traveling circus and fire eaters that gives way to a quiet moment between Anne and Wentworth, then their walking away in silence, arm in arm. Then of course there is the baller scene in the Elliot’s place where Anne savagely burns Mr Elliot and Wentworth announces his intentions to everyone. Then of course, the whole point: (not Kellynch, by the way) but THE SEA. Together. Perfection.

Just … fight me if that’s not the best ending ever. I’ll be here all my life long for debates on Darcy’s … but let’s consider the Persuasion debate officially closed, mmkay?

*This article first appeared in May 2017 at That’s Normal.

What is your favorite Austen adaptation?

The Cool Table Has a Podcast Now!@thecool_table
987 Following 936 Followers
@macslandingfive Matt Damon and Ben Affleck are the most miscast men on earth
4 days ago
2
RT @hangoutlander: Have you read Bees? 3/4 of the ladies on this podcast have too. https://t.co/pgnrYazqld
4 days ago
2
@rach_art They are so so SO poorly cast
4 days ago
1
Is The Last Duel the worst movie I’ve ever seen?
5 days ago
3
@kjs3mom2 Here ya go! https://t.co/uQ8dj0KMM2
5 days ago
1
Archives
Books, Entertainment, Fantasy, Movies, Pop Culture, Rants, Star Wars

Quarantine and Chill: Movies on Demand