Oscar Fashion 2020 Recap: I Could Eat In That

Used Book Reviews at The Cool Table are our reviews for books that were released, read and reviewed quite awhile ago but that we cannot stand for you to miss. Whether you need a new read or re-read, Used Book Reviews is here to remind you of our favorites (because we have great taste) and help you find them on a sale rack somewhere (actually, let’s hope they are on sale at Amazon because we cannot scour all your used book stores for you). Call it Vintage Book Club. Call it Re-read, Review, Recycle. Call it Little Late Library. It’s Used Book Reviews.

It is a truth universally acknowledged that when a book becomes a classic and is touted as the paramount of fictional romance, the following typically ensues: sequels written by other authors, multiple screen adaptations, and various attempts to take the early 19th century book and transform it for the 21st century.

Yes, I mean Pride and Prejudice.

Jane Austen’s classic has seen its fair share of sequels: from Mr. Darcy Takes a Wife, where Elizabeth discovers her “Oh” face, to The Pursuit of Mary Bennet, which gives spinster-in-training sister Mary a chance to have her own happily ever after. Who could forget Colin Firth’s wet t-shirt contest in the beloved miniseries or Kiera Knightley’s horrific wig complete with frizzed bangs in the 2005 remake?

This time around, author Curtis Sittenfeld tries her hand at modernizing P&P with her new novel, Eligible, and in my opinion, this is perhaps one of the best modern adaptations worthy to compare to the original. 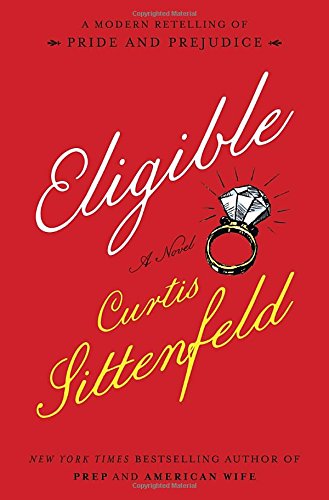 Sittenfeld, who famously explored the world of love and politics in American Wife, now takes us to Cincinnati and to the home of Frank Bennet and his wife and five daughters. The storyline still follows original concept: Mrs. Bennet is desperate for her daughters to find a spouse, especially Jane and Elizabeth. But this being 2016 and with advancements in women’s liberation, Curtis Sittenfeld effortlessly transforms the Bennet sisters into 21st century women.

In this retelling, Jane and Elizabeth Bennet are successful, independent women who have made a name for themselves in New York City. Jane, a yoga instructor and health connoisseur, and Liz, a former magazine editor who returns to her initial love of writing, return to their childhood home in Cincinnati to help care for their father after a heart attack. There we meet Mary, the textbook middle child who is working on her third masters degree and has a secret life no one knows about (read the book and you’ll find out what it is); and Kitty and Lydia, the youngest of the sisters who are obsessed with parties, texting, and Cross-Fit. And yes, we meet Mrs. Bennet, who is still consumed with finding suitable husbands for her daughters, especially Jane and Elizabeth. But this Mrs. Bennet is now the planning chair of the Cincinnati Women’s league and her preoccupation with the group’s annual fundraising luncheon forces Jane and Liz to extend their stay in Cincinnati to care for their father.

Gone are the formal balls, replaced by neighborhood barbecues where Liz and Jane meet Dr. Chip Bingley and his friend, the cold and aloof Dr. Fitzwilliam Darcy. In Sittenfeld’s adaptation, Chip Bingley moves to Cincinnati after a stint as the desirable bachelor with twenty-five single women vying for his love and a ring on the popular reality show, Eligible. (Sound familiar, Heidi?) It is during this gathering that Liz overhears Darcy’s not-so-flattering opinion of her and so begins the heated exchanges, passionate disdain and finally the love that makes us all want our own Darcy, even this 21st century version.

Although the linear narrative is similar to its predecessor, Eligible does make a quite a few changes and shows us that this isn’t just the Pride and Prejudiceyou read in your AP English class. In Sittenfeld’s version, the Bennet sisters are real women who are beautifully flawed just like the rest of us. They have careers, they’ve had broken relationship (one is even involved with a married man), they sometimes drop an f-bomb or two, they sometimes drink, they have hate sex, they text, they eat carbs while trying to master the Paleo diet. And while Eligible still addresses the original’s take on the class system, this 21st century version also dives into sexism, racism, sexual orientation, and the fictiveness of reality television. (Wait. Shows like The Real Housewives of Whatever City Allows Bravo to Film are not real? Whaaat?) But don’t be disheartened by this change: Sittenfeld still gives us those moments that made us fall in love with Austen and the story.

In the end, Eligible‘s clever and reverent take on Pride and Prejudice still delivers the wit and passion that would make even Jane Austen herself a fan.

The Cool Table Has a Podcast Now!@thecool_table
988 Following 939 Followers
Shrimp-gate, Baywatch, Singing in underwear, oh and, Kaitlyn Bristowe made everyone cry. Must be #TheBachelor https://t.co/fD7xk1maFJ
3 days ago
1 3
We are going to do a Where's Waldo but with Amy, as in Where's Amy in #GildedAge Newport. Since she lives there. https://t.co/RKLfEbA4P5
3 days ago
4
RT @RebeccaCokley: "You’re still making that f---ing backwards story about seven dwarfs living in a cave together," says Peter Dinklage. "W…
3 days ago
1.5K
Figuring out why I’m loving @Station11onmax by figuring out why I hated @TheLastDuelFilm https://t.co/NIHG4duULO
3 days ago
RT @BlessAmysHeart: When @bethorne writes the smartest shit.
4 days ago
1
Archives
The Bachelor, TV

Oscar Fashion 2020 Recap: I Could Eat In That