Welcome to my first ever San Diego Comic Con post! Comic Con so far has been…well, like every single other day of the past fourth months. I’m told the normal in-person experience is enjoyably chaotic and exhausting, but it was also kinda great to forgo a bra, watch panels in bed, and pee whenever I wished.

My favorite panel thus far was Saturday’s “Blast off with Disney+’s The Right Stuff“, an upcoming television about NASA’s first astronauts.  It was moderated by the incredible Dr. Mae Jemison, former NASA astronaut as well as the first woman of color in the world to go in space. The first original drama series from National Geographic, The Right Stuff will be airing on Disney+ this Fall. Here’s what we learned at the panel! 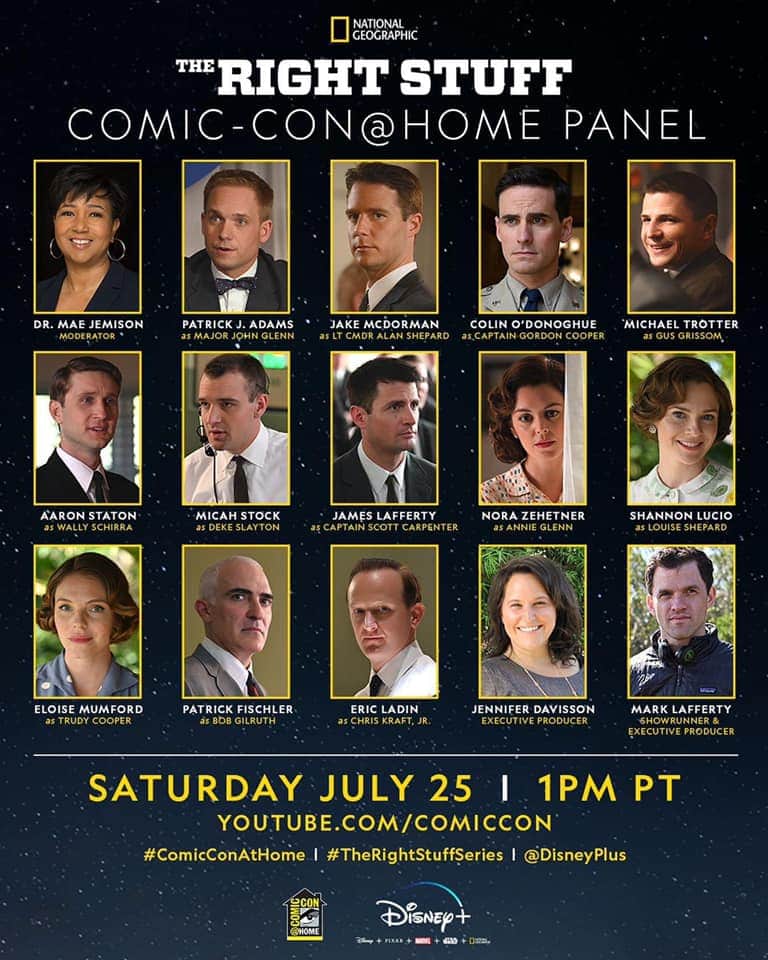 The Right Stuff is based on the book by the same name by Tom Wolfe (there’s also a 1983 movie adaptation). But it aims to do much, much more than retell a pivotal time in America’s history. Executive Producers Mark Lafferty and Jennifer Davisson emphasized repeatedly how they wanted to really delve into the lives and personalities of the people attached to the Mercury space project.

The show aims to explore a lot of questions: What exactly is “the right stuff”, and did it manifest the same way in all of them? What made those seven guys tick? What were their flaws? And what was it about them that made them capable of looking up into the infinite vastness of space and say “Yeah, I could be the first one to ever go there”?

But what’s even more exciting about The Right Stuff is how determined the showrunners are to shine a spotlight on “the wives” (a term the panel hates, by the way). Many of the astronaut wives were accomplished and groundbreaking in their own fields, but history has favored their more famous husbands. The panel was proud of how realistically the show portrays the sexism (and racism, which will be explored more in Season 2) of the early NASA days, when women were barred from joining the space program, and highlight the real life women who laid the ground work for future female astronauts.

Will I be watching The Right Stuff?

I love all things space, but The Right Stuff aims to have a mainstream appeal and tell universal, human stories. It’s not just about the Mercury 7 program; it’s about the heroic but flawed men and women who worked together to achieve the impossible.

But…yeah, I will also be watching for the space stuff! Space isn’t called the “Final Frontier” for nothing, and I will never not be awed by the ingenuity and bravery that took mankind into orbit and beyond. And if you want more information on the early days of NASA and the men of the Mercury 7 program, I highly recommend the documentary When We Left Earth.

You can watch the full panel below!

The Cool Table@thecool_table
1.0K Following 1.0K Followers
RT @BlessAmysHeart: And @bethorne created a reading list/reference guide she mentions during the show. I say Beth is the brains, and I’m th…
15 hours ago
1
RT @BlessAmysHeart: Want to know what I believe now after leaving the #Evangelical church? Check out the latest episode of our #Exvangelica…
15 hours ago
2
@chels__ebooks if you can't HEAR and SEE it, you aren't fit to lick booktok's boots
19 hours ago
4
Archives
Amazon Prime, Comic Con, Entertainment, TV

Marvel Studios Phase 4 Trailer is Everything

The Mandalorian: The Good, The Amazing, and The Frog Lady