Photo by David Lezcano on Unsplash

Tyler Cameron Was Finally On The Bachelor

I’m always late. No, I don’t mean the last to arrive to special events, although I’m sure my family would tell you otherwise. I mean I’m always the last person to come to The Cool Table of pop culture. I’m just now getting into Schitt’s Creek; I finally listened to Hamilton four years after everyone and their grandmothers were rapping “My Shot;” I still haven’t watched Avatar. Not really embarrassed by that last admission.

With that in mind, it’s still shocking to some when I made the following declaration on our first Bridgerton Book Club hangout (Go to 1:24):

My name is Julie, and I am a Regency Romance Virgin.

Okay, so technically a regency romance virgin no longer, since I’ve rushed through almost all the Bridgerton novels. Just like a regency ingenue’s first time, it was gentle, passionate, and it left me craving more. Oh, and I didn’t have the threat of a UTI afterwards, so score one for me.

My intentions were to start my first non-Bridgerton regency romance series and completely become entrenched in the genre. Oh, the best laid schemes o’ mice and men…and me.

It’s been almost a year, and I still can’t decide which series to start with. Trust me, I tried. I went on to Goodreads, every suggested reading list on Amazon and Barnes and Noble, and even to close friends. Each source led me down a different path. I was like that Zach Galifianakis gif, only instead of numbers and symbols floating around in my mind, it was authors, titles, and words like, “Duke,” “Honor,” “Thrust,” “Lady,” “Scandal,” and “Vapors.”

Bottom line: I needed help. That’s when I reached out to you:

Who needs Goodreads when we have all of you! Julie is FINALLY diving into the world of regency romance, and she needs YOUR help!

Which regency romance series do you think she needs to read? Comment below!

Let me just that y’all are not messing around. Whether on Twitter or on Instagram, our DMs and mentions were filled with amazing recommendations and pleads to start this series or that author. My regency romance cup was so overflowing, I still was at a loss at what to do. That’s when inspiration and my gift at indecisiveness hit me:

My next Regency Romance would be at the hands of the people.

That’s right: You get to decide which series I should start with. Narrowing down the choices was no easy feat; all suggestions were tempting. But narrow down we did and here are the contenders for my literary heart (and Kindle memory space):

“Four young ladies enter London society with one necessary goal: they must use their feminine wit and wiles to find a husband. So they band together, and a daring husband-hunting scheme is born.”

This was the first recommendation I received, and Lisa Kleypas is already one of our favs. So, I’ll definitely be in good company. 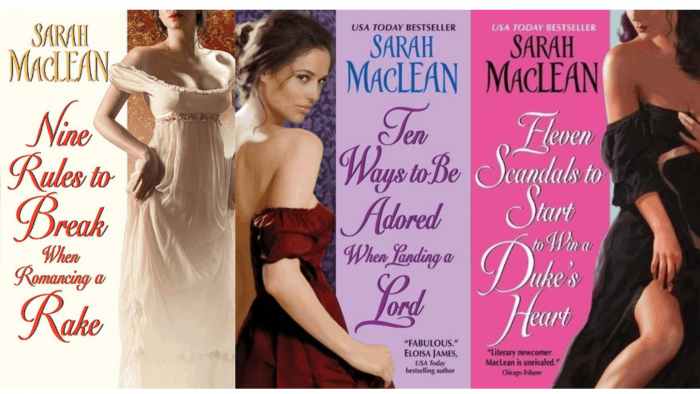 According to Regé-Jean Page, a “Rake” is a “Regency fuck boy,” so I definitely was excited when I saw that Sarah MacLean’s first book in her Numbers series was entitled Nine Rules to Break While Romancing a Rake. Someone is gonna get fuuuuucked.

When I showed the girls all the recommendations you guys delivered, Heidi was quick to point out, “I like the Scarlett Peckham books if you want kink.” And just like that, The Secrets of Charlotte Street pushed aside the competition for a spot at the top four. No questions asked. 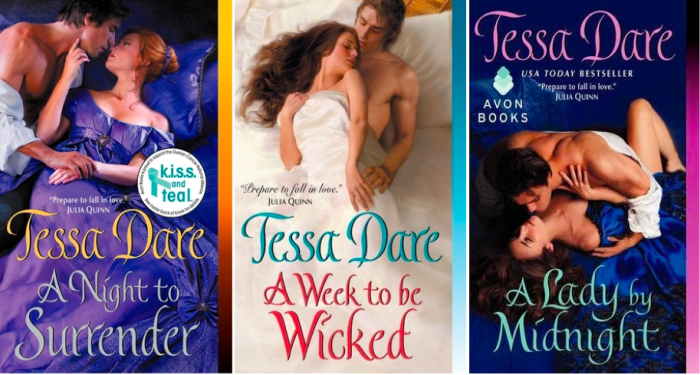 I’ll admit it, I have a hard time being my age and reading about 21 year old women in search of love and marriage, or be in fear of forever being labeled a “spinster” in their mid-twenties. Honestly, if a 25 year old single woman is a “spinster,” I’m a zombie. So, when I came across Spindle Cove, a series about “spinsters” who are “not looking” for love, Tessa Dare instantly became my literary soul sister.

So, there are the four candidates for this year’s Julie Regency Romance Adventure. You have until February 12th to vote, so exercise your right and let your voice and book choice be heard! And because I know you’ll ask, here’s your “I Voted” sticker:

May the Odds be Ever in Your Series’s Favor

The Cool Table@thecool_table
1.0K Following 1.0K Followers
Yesssssss https://t.co/rGaJC4TAJ4
39 mins ago
1
Latto Brought Big (Villain) Energy to #TheBachelor for episode two of Zach's season. https://t.co/qyqmqEZIpH
9 hours ago
1 4
@pagemelt I know nothing about them but it's a good assumption since the album is titled Dear Wormwood. I have so m… https://t.co/rXXSQbWwlG
11 hours ago
2
@pagemelt isnt the whole album based on the screwtape letters? RED FLAGs
11 hours ago
1
@MrsKowski unfortunately yes
12 hours ago
Archives
Entertainment, TV

Looking Up The Luminaries

Tyler Cameron Was Finally On The Bachelor