Making the Cut: Respect the Couture

Outlander Episode 507, “The Ballad of Roger Mac” just aired. We were promised a kickass, no-holds-barred back half of season five, and if this episode is any indication, we are on our way. When you click on a recap like this one, you know how you feel about the episode already. I guess what you don’t know is how I feel about it. Well.

But I’m getting whiplash. 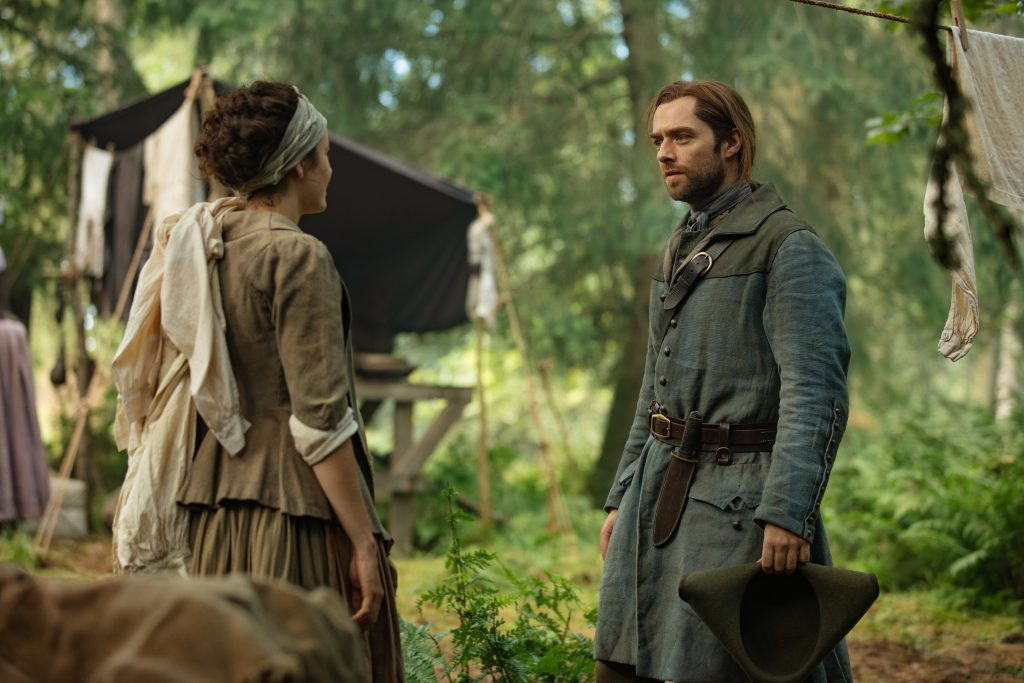 While the jury is still out, this episode seemed to at the very least leave the whinging, weary Roger behind and give us the kind of guy who will go to war without looking back, will take charge of a delicate and dangerous situation without complaint, and will stand up to a man asserting dominance over a woman to his own detriment.

Now, we’ve seen this before to some extent: Roger did try to stop Bonnet from throwing sick people overboard. He did return to the Mohawk when the priest was set alight. He didn’t leave when he discovered the forest circle of stones. But every other time, Roger has wavered, has wondered, has WHINED. This time he acted. More than once. And he paid for it. We call that growth.

Which Tent We Talking Bout?

Unlike most of you absolute horndogs, I am not chomping at the proverbial bit for sexy scenes between our Outlander leads. I am content with proof that Jamie and Claire are in love and, oftentimes, in love whilst in bed. I’m all for a pre- or post-coital scene filled with humor or tenderness or any other proof of intimacy. For me, cute convos and shoulder kisses trump awkward, angry stable thrusts every time. Hence, I loved the tent scene.

Jamie half-naked while talking about turning fifty … FIFTY … while looking like a whole ass snack in the diffused morning sunlight is an ENTIRE Outlander mood. I used to say, back in season one, that the whole thing was Jamie and Claire half naked in some hay or some heather, but as they’ve matured, the whole thing is definitely more Jamie and Claire half naked in a reasonable bed of some sort. Aging is all about comfort; I am writing this from my Parachute sheets.

Claire looks best readying an outdoor space for carnage and casualties. I feel like we haven’t seen her quite this much in her element since Prestonpans, or even season one, when she celebrated the end of WWII with a swig. Of course, she’s set up triage on a boat and in a wagon and an abbey and a drawing room here and there, but the battlefield is her wheelhouse, that medical tent, her canvas. You love to see it. 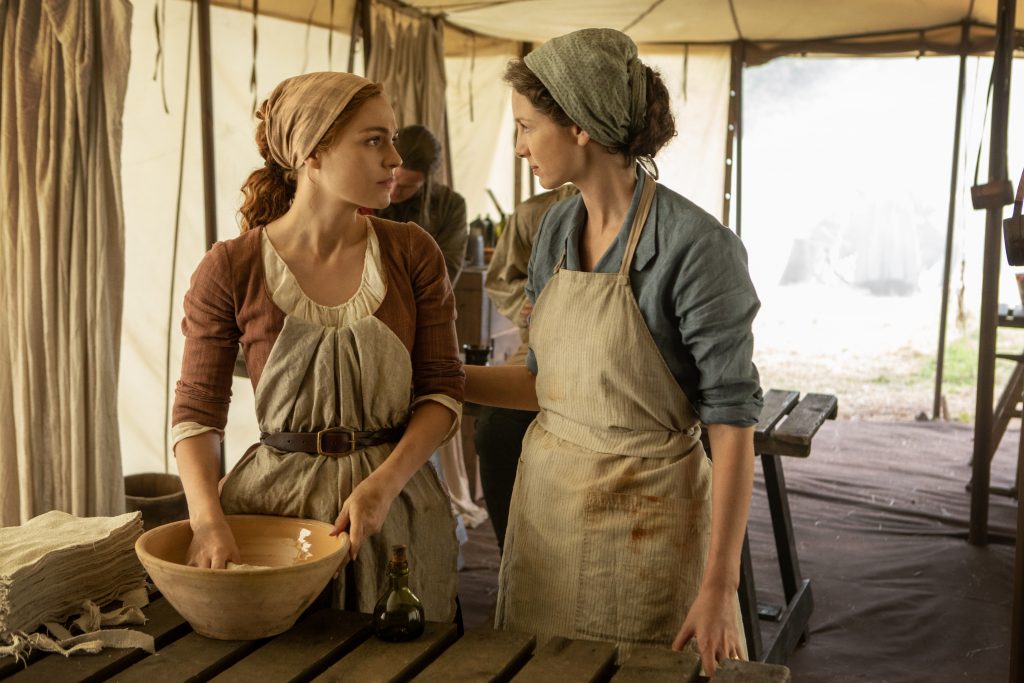 Her fight with the Browns is portentous and classically Claire: unafraid and unabashed to tell a man she knows him for what he is and what he did. Plus, we’ve finally seen the reason for that damn syringe. 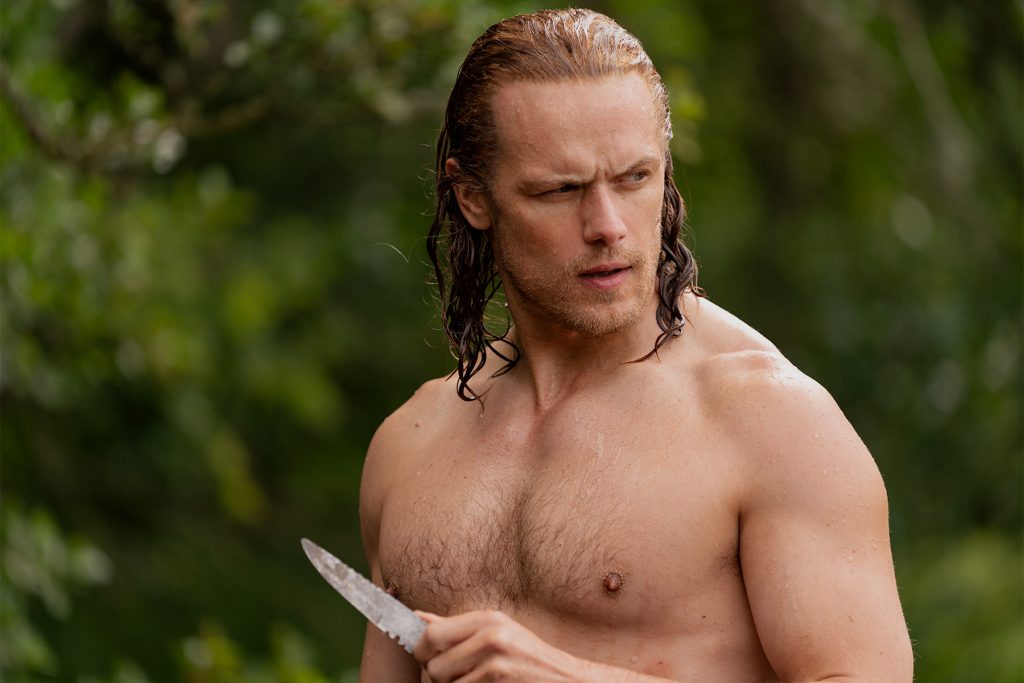 It’s weird to need a reminder of Dougal, and yet it comes at the perfect moment. A reminder that Jamie’s religion is just this side of pagan. His mixture of ancestral intercession, blood petition and sign of the cross is a heady way to remind the audience that family, blood and tradition mean just about everything to this man. Calling on Dougal, whose son shows up in a moment, is a great call-back and an even better shift forward.

It’s time we talk about Murtagh. Last week, we bemoaned the ever-present unthoughtful storyline that the writers inserted for Murtgah and Jocasta. Requiring closure for a relationship that you didn’t need, didn’t go anywhere, and didn’t provide any real emotional stakes in the story was a waste of everyone’s time.

But that was last week. This week we are treated to the actual reason that the writers had Murtagh not only survive Culloden, but survive Ardsmuir. Everyone gasped when Jamie found Murtagh in the dark of their mutual prison cell in season three. He was Jamie’s emotional anchor for the length of an episode, and it hurt all the more to see him go and leave Jamie alone. It brought emotional heft to an already physical pain of Jamie’s incarceration.

Everyone cried when Jamie and Murtagh were reunited in the smithy in season four. We cheered for their happiness and seeing one another; we found solace in Claire’s joy at having an old friend returned to them all, but especially returned to her husband. Murtagh again brought an emotional anchor to their life on the Ridge that other former Ardsmuir prisoners would not have been able to provide. 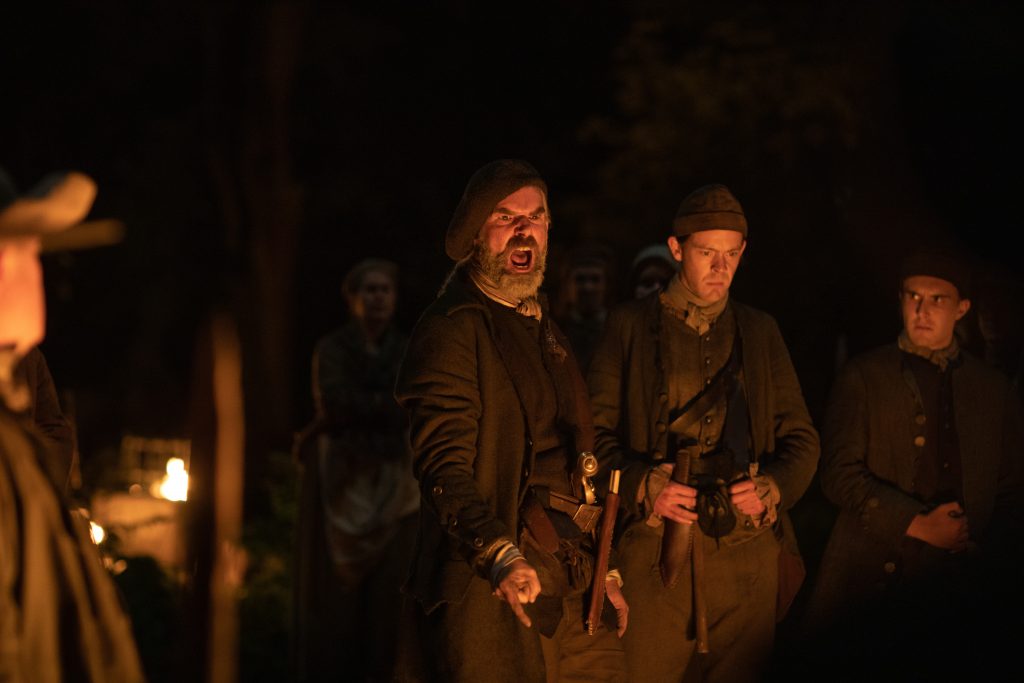 And now we come to it. The war with the Regulators was always going to have to be a big part of season five. There was no getting around the reason why Jamie had to be on the side of the British, had to fight for them. And of course, EVERY good season of Outlander has had its share of battle scenes. But other than the general danger, the war with the Regulators lacked emotional stakes for Jamie and Roger and the rest of the men on The Ridge. Sure, in the books, they knew a few of the ringleaders, liked them, sympathized with them. But we’ve already talked about the effusion of day-players and forgettable faces that make it hard to care from episode to episode about who is doing what.

Not so with Murtagh. What other character has been there since Season One, Episode One, by Jamie and Claire’s side, aware of the true cause of Claire’s healing power and foreknowledge, dedicated to Jamie with a singular purpose? No, it had to be Murtagh that gave this storyline real power to torture the characters. Yes, Murtagh deserved better. Yes, the character we know from the books would have made other decisions. But without him here, this story would have fizzled (like so many others in the series have), and I, for one, am glad this was his end.

Spoilers are the actual worst when the surprises themselves truly mean something. Mid-way through this episode we were treated to two of the biggest surprises thus far of the season. One was spoiled for us; one was a well-kept secret.

Every viewer hurts along with Jamie as his entire self revolts at the idea of wearing the British redcoat. You can see the visceral, physical pain it costs him to don it. It’s a powerful narrative and character moment, well-written, superbly acted, and impressively shot. It’s also a perfect example of why you make sure that the people cutting your trailers understand what the real spoilers are. I truly wish we hadn’t seen it ahead of time. Then we could have all reacted like Claire did: with revulsion, shock and true hurt for Jamie.

But they managed to save one very delicious secret from us in William BUCCLEIGH Mackenzie. I’m sure a lot of people will say that they managed to know as soon as they heard his voice that Buck Mac was being played by Graham McTavish, but I’m gonna call bullshit on that one. You had to at least see his nose first.

Having the illegitimate, bellicose son of Dougal (and Geillis) played by the man who gave us Dougal was (ugh I hate to say this with regard to Outlander but) a bit of genius. Even for those who don’t know who Buck is, the way the camera focuses on him and the measured control that Graham brings to his menace make him ten times more consequential a figure than if he’d been played by someone else. Bravo, all. (Also Richard was really good in that scene). I cannot wait to see more Buck next week.

Shot the way battles should be shot: chaotic, nonsensical and with several storylines going on at once, this episode ratcheted up the tension to give us the emotional release we’d been waiting for: the scene between Jamie and Claire in the medical tent. The true battle between Jamie and the reality of Murtagh’s death was the cherry on top of a great sequence of events.

What were your Top Moments from The Ballad of Roger Mac?

Need to talk about it more? Join us tomorrow night for Hangoutlander on Facebook and YouTube as we talk all things Outlander Episode 507.

The Cool Table@thecool_table
1.0K Following 1.0K Followers
Yesssssss https://t.co/rGaJC4TAJ4
46 mins ago
1
Latto Brought Big (Villain) Energy to #TheBachelor for episode two of Zach's season. https://t.co/qyqmqEZIpH
9 hours ago
1 4
@pagemelt I know nothing about them but it's a good assumption since the album is titled Dear Wormwood. I have so m… https://t.co/rXXSQbWwlG
11 hours ago
2
@pagemelt isnt the whole album based on the screwtape letters? RED FLAGs
11 hours ago
1
@MrsKowski unfortunately yes
12 hours ago
Archives
Current Events, News, Raves, Uncategorized

An Open Letter to Teachers During a Pandemic

Making the Cut: Respect the Couture