Last week Jamie was killing a man in cold blood, but this week we are back to Outlander: brought to you by Southern Bride. For all it’s story-telling faults, at least Outlander Episode 506 was pretty.

We began this episode with a look back at the fallout of Culloden and the story of Jocasta and Hector Cameron’s flight from the highlands. It’s a good scene, and a punctuated reminder that Scotland should be one of the threads that runs through this series in a very tangible way.

A better show would make it even more evident. For instance, Jocasta’s reverent touch of Murtagh’s plaid and brooch later should have grave impact on the audience, but, it just looks like the lamentable touch of a lover saying goodbye. Unfortunately, in this flashback, the audience is forced to hie back to far flung episodes from a couple of seasons ago to dredge up the import of Charles Stuart’s gold or the highlander’s response to the outcome of The Rising. Beyond what it would be like for a mother to leave her daughter dead in the mud on the side of the road, this scene lacks a punch that connects to the body. And yet, it was one of the best ones of the episode for how it reminds us … HEY! Scotland! Is Important! To Our Protagonists! And Our Story!

Outlander is plagued with throwaway day-players. Every episode there is a new character that we are supposed to instantly hate or love or empathize with, despite knowing little about them. Such is the case with Phillip Wylie, who we met briefly last season, but has no direct connection to this season’s story. Unlike Peregrin Took, who we saw in an earlier episode with Stephen Bonnet, we haven’t seen Wylie since midseason 4. 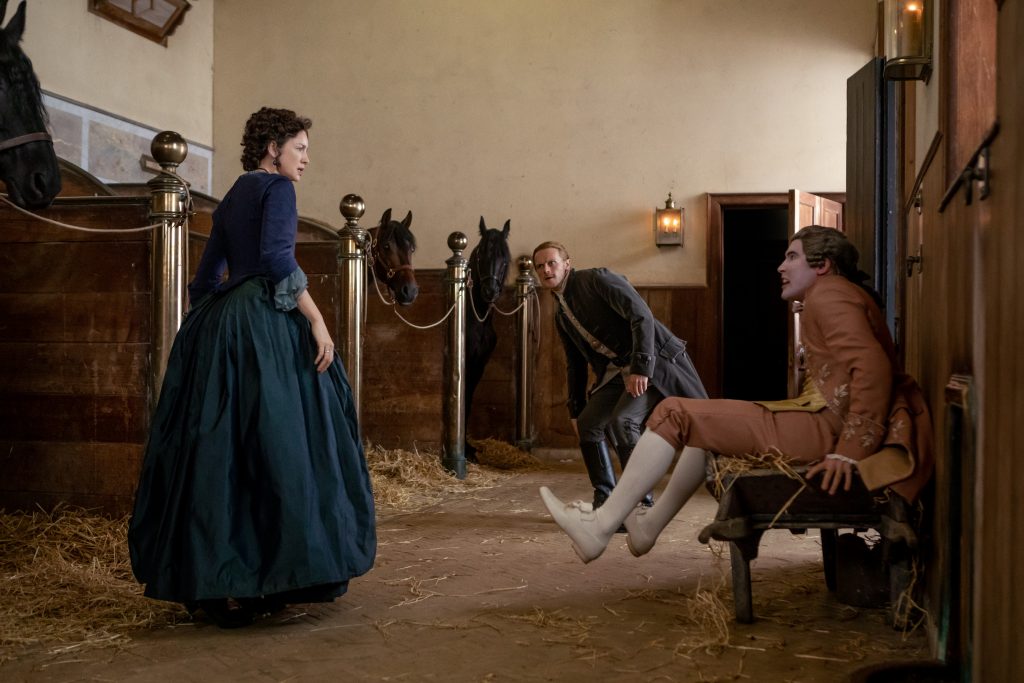 However, at least he’s memorable. The problem with the interchangeable men in breeches and tricorns is that we can’t tell them one from another, unless of course they show up more frequently (Tryon, Bonnet … that’s all I got). But Wylie has an unforgettable affectation and presence and style. He looks fully like the character from the books as well. IF he shows up again, and that’s a big if, at least we will remember where we last saw him.

She’s no Martha Washington, but if we are treated to another commutable upper class female character, I was glad this one seemed friendly, wise and a comparable companion for Claire. More Lady Tryon’s in Claire’s life; as she (also) has little time for her husband’s shit. I like seeing Claire with female friends.

Back on the Ridge, Roger and Brianna realize that they are going to be beset with a biblical plague of locusts in just enough time to try to do something about it. This side-plot was a good reminder that the show is capable of following more than just one storyline and not slowing down. The pacing of the plague narrative was good; there was a beginning, middle and end. There were stakes (the crop and Roger’s pride). Was it perfect? No. After all, Lindsey and the other guy came all the way from their own farms to simply thank Roger for coming up with a winning plan? I’m not sure that’s believable. But as a side-plot it keeps us invested in The Ridge. 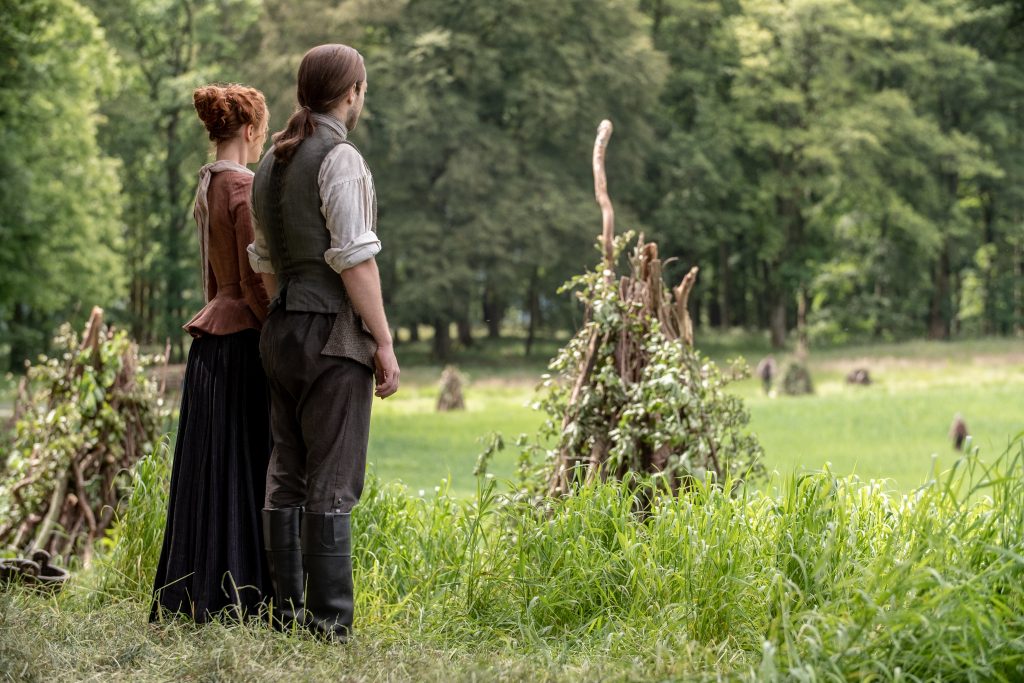 And I’m getting very much over Brianna’s entire storyline being bolstering against Roger’s insecurities, of which he has several. “Whatcha got there, honey?” and “Good job, honey” is wasted on a character like hers. A more interesting take (and one that the source material supports) is that Brianna finds inventive solutions to their problems that make Roger proud to be by her side. Remember when this was touted as a feminist show?

Look what we can do! Silks and wigs and florals and candied pineapples and chandeliers … OUTSIDE! It looks great. If only more of the episode took place at the actual wedding and made use of the gargantuan, impossible set.

When I think of season one, I think of Castle Leoch, or the thieves hole or Cranesmuir. The sets were a part of the story in a way that made sense. The set decoration was integral to Claire’s novel experience. In season three, the sets in the 60s spoke about the tension of Claire’s antiseptic life with Frank. The extravagance of the sets this season speak to nothing. Nothing took place under that wrought iron dome. Why have it? Anyway, it looked nice. However, I have to ask, how long have they been planning these nuptials and who planted the wisteria vines at the four corners of the raised platform … just so? 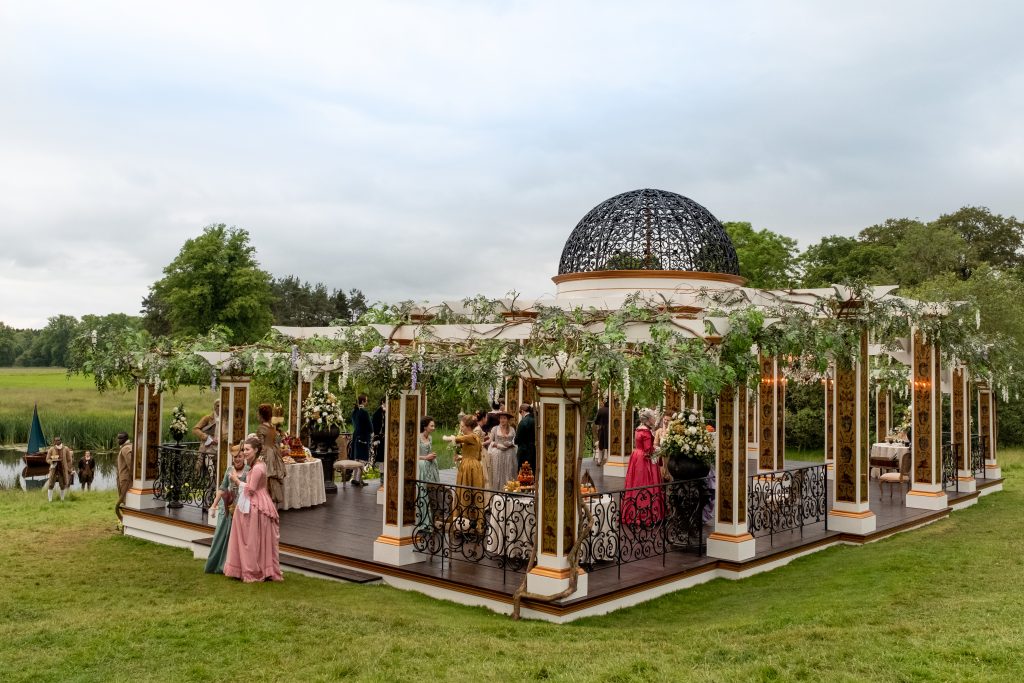 I would be remiss if I wrote about this episode and didn’t praise MDK for her portrayal of Jocasta’s pain in both the opening scene and in the retelling of it to Murtagh. It was moving and poignant, and her choices were what kept an overlong scene from being overwrought.

You know. That scene after the stable scene. The sweet one. When Jamie and Claire were in character. I liked it.

Episode 506 is a perfect example of how this show leapfrogs from episode to episode, with only the flimsiest of connective tissue (should I say spider webs) between them. This season those webs are mostly Roger’s emasculation/insecurity and the wild hare pursuit of Stephen Bonnet. Those are literally the only aspects of season five that have shown up in every episode.

There’s the perennial threat of Jamie/Tryon vs The Regulators, but we are truly being whipped back and forth with that storyline in a way that provides no through line, no sense of heading. Remember, it was just last week that Knox told Jamie that they were all being pardoned. And now, it seems, the war is imminent.

So, why did we take this detour to Jocasta’s wedding? Was it just for the Murtagh closure … a storyline that didn’t have to be in the show at all, which suddenly needs an ending? Please recall that this relationship didn’t even happen until the end of season four, then they broke up in the first episode of season five. If they hadn’t figured out what they wanted to do with Murtagh by the time they broke season four, why in the world did they have bother throwing this wrench in there? Why create a problem you don’t have a solution for?

But it doesn’t seem like the writers care that we hop from adventure to adventure like a season of Dora the Explorer. (Fergus is Boots, because he doesn’t have enough lines). It makes as little sense for Murtagh to be in Jocasta’s bedroom that night as it does for this episode to open with the Stuart gold.

When I think of the storyline of the Stuart gold in The Fiery Cross, I can think all the way back to the first book, and Dougal’s machinations. I can easily remember the discussions between Jamie and Claire in France. I can see Jamie swimming in shackles to a tiny island. I see Young Ian and Geillis. I experience the pain and loss of the highland way of life, and the toil and pain required to make a new one in the New World. I see the Gathering as an expression of that life in a new place, a long-held breath that the Scots of North Carolina get to exhale together. I envision the Regulators as a desperate band of men who refused to be put down because of the reality of their shared history.

The stakes in the book when Jocasta relays the story of their flight and the gold are FAR HIGHER than her just telling an old lover what was up. The idea that there were three Highland clans in charge of protecting the gold, and that Jocasta still has some, brings a ribbon of connection to Culloden, to Scotland, to other characters we know and remember and … what should be … to the show’s earlier seasons.

When I think of the storyline of the Stuart gold in Outlander, the series, I think of … this scene with Jocasta. It’s connected to nothing. The writers made it a simple moment for one character’s pain in a scene instead of connective tissue of a major strand of the bigger story, the story of ALL of them.

This is the problem I have with Outlander. Last season, we rightly berated the writers for losing the plot of Jamie and Claire’s connection as they strove to tell one story at a time about Willie, or Roger or Lord John or Bree, (or a bear man or a dead man) but rarely about Jamie and Claire’s love. It seems, so far, in season five, that they heard that criticism and have worked in every episode this season to have them front and center.

It seems, however, that they’ve been unable or unwilling to pull the other threads of intimacy and connection from book to screen. Jamie and Claire don’t exist in a New World bubble, going on adventures every couple of weeks in fancy dress or funky one. They fight for The Ridge because they lost the Broch. They live on The Ridge because they can’t in the highlands. They care for those people because they came from their home.

When I think of the storylines I want to see on this show, I want to see the strands of Scotland. I want to see why they only trust other Scots in time of need. I want to see Dougal and Geillis again. I want to see Jamie’s fierce pride at his grandson being named master of Riverrun look different than his false promises to Tryon and Knox. I want more than just Jamie in a kilt sometimes. I want the ACtUaL story to connect the audience to the bigger one.

Join us Monday night on Facebook or Youtube as we talk about everything else about this episode. And yes, that will include Diana’s comments about the stable scene, and someone’s bad behavior this week. OF COURSE IT WILL. In the meantime, follow Hangoutlander on Twitter and Instagram, as well as The Cool Table.

The Cool Table Has a Podcast Now!@thecool_table
1.0K Following 988 Followers
Getting my hate watch britches on for this one. https://t.co/SZ1N40HOHi
11 hours ago
3
So excited to be a guest on Sierra & Ryan Talk the Tok: it’s a #booktok podcast! Go listen and give them a follow. https://t.co/qzOVPWS1Bh
5 days ago
2 6
SooooOOoOoOooo it's almost #SDCC time. We're getting all our cosplays and deodorant choices in a row. Who else will be there?
6 days ago
6
@ch00chelo DEAR LORD VIVEK OJI has been the best book I’ve read this year
2 weeks ago
2
Holy shit the last episode of Kenobi
2 weeks ago
4
Archives
book review, Books, Romance

Quarantine and Read: The Friend Zone by Abby Jimenez