Quarantine and Chill: Give Us Streaming James Bond, You Cowards

Wow. Wow-eee. Talk about your schizophrenic episodes. Outlander episode 505 will go down in fandom history as being the most mixed-reaction episodes since … the entire back half of season 3. A great deal of WHATTHEF*CK and AWWWWW and REALLY??? all in one … unusual … hour of television. Unfortunately, or fortunately if you love to debate it like we do, every single scene in this episode hits a good note AND a bad one. There’s a poison pill in almost every moment. Let’s get to it.

This is the first time a title of an episode and a cold open had me going to back to season ONE to see if there was a precedent set. The Perpetual Adoration is a practice that Claire is introduced to in the first book when she is in the abbey awaiting Jamie’s healing. In the show, she spends some time in the chapel and makes confession to the father, but there is no mention of the stillness, duty or remembrance that the Perpetual Adoration provides.

Why include it here and make it the centerpiece of the episode? Is it simply an Easter egg for book readers? As it opens, it looks like Future!Claire spent time in a Boston cathedral to remember Jamie in a practice that would have made her feel closer to him. The way it’s shot even makes it look like something she did regularly, as we fade in and out on her rising and kneeling as she says, “How many times have I put my hopes, my fears, my secret longings into the hands of a Being I can’t see?”

But as the episode moves on, we realize it’s something she’s doing just for the one Scottish patient who reminds her of Jamie, and the connection they’re making is to … penicillin? It’s a clunky narrative move, with no real callback to anything tangible in the show.

BUT I do like the reminder that this is a time-travel show, without the gauche dialogue we are used to. A good flashback, well-positioned to make a poignant connection is always welcome. As is …

Serving looks and pure situational contrast, Sixties!Claire is gorgeous and haunted. I don’t have much else to say about it other than the contrast between the equally beautiful but contented Claire of the 18th century is a welcome narrative reminder that Jamie is her home. Modern medicine, friendships, career … none of it reaches her soul like the simple return home of the man she loves.

Desperate for scenes that make Roger and Bree seem well-suited and in love, this post-coital convo was a welcome addition to what we normally see of their relationship. They’re finally … cute. Poison pill: Roger is still asking for validation (this time about whether or not Bree had an orgasm, which if he has to ask, she didn’t), still whining about Jamie, and he is still not taking Bree’s interests seriously. When she perks up about the potential for Mackenzie University, he shoots it down.

I’ve mentioned already that flashbacks to Claire’s time as a competent surgeon and her reminders of Jamie during that time are a welcome narrative device when they make a greater point in the current story. I thought the character of Graham Menzies was fantastic; I loved his easy nature and endearing Scottish banter. He quotes Jamie from season 1 directly, and it affects Claire greatly.

I’m just not sure why we are seeing it now. This is season three stuff, and in truth, the connection between a patient in the 1960s who died of a penicillin allergy, and a patient in the 1760s who doesn’t is tenuous at best. Yes, Menzies’ death precipitated Claire’s journey to finding Jamie, but the ham-fisted voiceovers that lead us there and the story-telling motifs of two seasons ago are a bumbling way to arrive.

This is how you do a flashback: a reminder of Bonnet’s menace, Roger’s close connection to him (of all of them, Roger is the one who actually knows Bonnet best), and the central tension between Roger and Bree re-established.

UN-thefuck-fortunately, it leads to one of the worst scenes since season four. Roger demands answers from Bree about the diamond in a bid for the audience to – I’m assuming – sympathize with him, but it could not be more tone-deaf. Jemmy’s paternity has been dealt with, and Roger has made his choice. To continue to belabor his pain over this is a sweeping dismissal of the very real trauma that Bree has been dealing with from her violent rape. Roger is aggressive in his stance, in his line of questioning and in his selfish response. Bree is the only one who apologizes. Roger makes no effort to understand her complicated set of emotions, and AGAIN, makes it all about him.

Claire coming across Roger in the woods was a great scene because it allowed Claire to remind Roger of a very important truth that it seems difficult for him to get on the first and second and third go-round: he’s not the only man to love a woman and raise a child that is not (or may not be) his. And the focus should be on the child, and never on that grown ass man’s feelings.

And yet, poison pill in every scene, remember? Amid his amends, he tries to comfort her with the one thing she’s told him she’s not sure she wants: going back. Bree’s face says it all. Roger, it’s not enough.

Your Honor, It Was Self-Defense 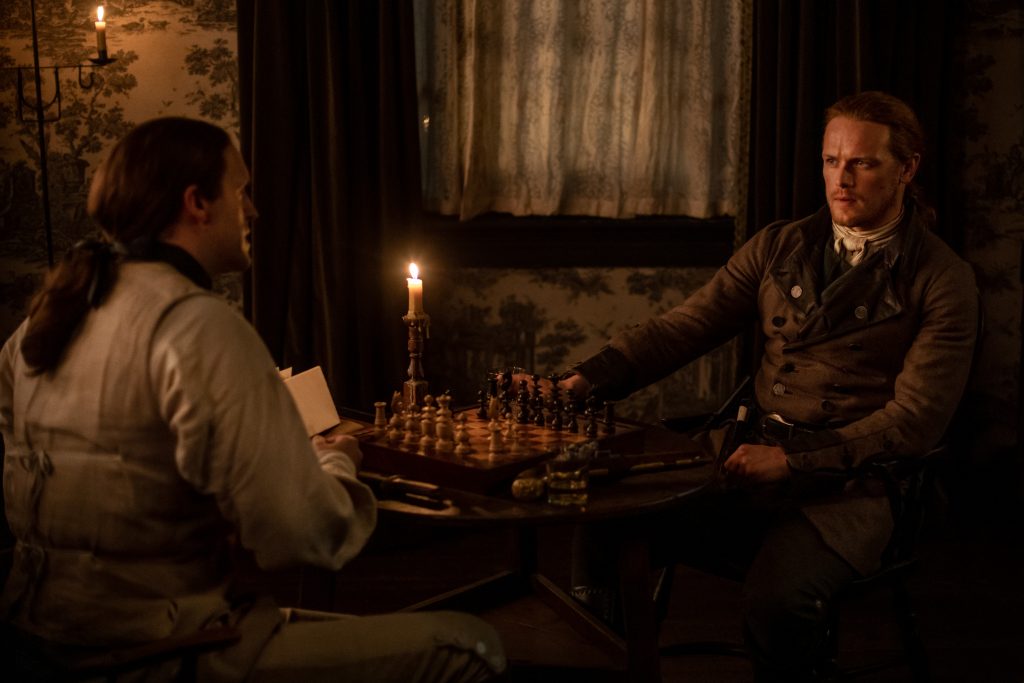 The last thing I want to see is Jamie callously murdering someone he has been close to. However, he’s been playing both sides against the middle for awhile now, and the logical conclusion was that Jamie and Knox were going to have to have it out. Did I want something better? Yeah. Could Jamie have thought his way out of this predicament instead of knocking his way out? Sure. But at his heart, he’s a warrior, solider and sometimes mercenary. Murder is not beyond him.

However, there is a fundamental aspect of Jamie’s character that this particular plot point fails to appreciate. Knox hints at it: which one of them is fundamentally good? Jamie chastised him for killing a man in the jail, and yet Jamie’s behavior is no better. In the grand scheme of his life, Jamie will kill to protect his family, but would he do it like that?

Adso of the Murder Alley

Adorable. Necessary. And yet: found in the shadows of a murder scene. Hi, Adso.

#Adso is so ready to join the #OutlanderMidnight crew. 🐱 Meet him during the new episode of #Outlander now on the @STARZ App. https://t.co/qf3FhLdpAY pic.twitter.com/l0vHgXF2M0

So much to love. Claire gardening. Jamie looking beyond her, knowing he has much to tell her but content to be back at home. Claire smelling his neck.

But beyond it all: thankfully, the writers brought the convoluted flashbacks back to a point…Graham Menzies was the catalyst that led Claire back to Jamie.

This was not even everything there is to talk about in this episode. Don’t think I didn’t see that syringe, the lack of Fergus, or that perfect drawing of Murtagh on the wanted poster. There’s a lot to get to and A LOT of disagreement. If you don’t agree with me on any point above, you aren’t alone. So join us for Hangoutlander, Monday at 8pmEST, LIVE on YouTube and Facebook. We’d love to hear from you!

Check out all our Outlander coverage here!

The Cool Table@thecool_table
1.0K Following 1.0K Followers
@jamiesrule @jamadoria @coolstorymere I know you know this, but I"ve had pixie cuts off and on since 1997 and m*n h… https://t.co/VsXyyN7PpC
2 hours ago
4
@LSULeslie @schizoreads I’ve legit never even heard of this
1 hour ago
@chels__ebooks Yes! Josh O’Connor supremacy! I watched this right after I got obsessed with The Durrells ❤️❤️❤️
1 hour ago
@maria_gb75 Keep him
1 hour ago
@baskinsuns AGREED. I love love loved that as a kid (and vowed to be able to do it so someone would love me)
1 hour ago
1
Archives
Books, News, Politics

On Warren, Reading and Being a Late State Voter

Quarantine and Chill: Give Us Streaming James Bond, You Cowards