All You Need Is Love and Hawaiian Tropic

Welcome to the happiest and most positive Outlander outlet on the internet. At least for today. Because somehow a good episode from last week gave way to great episode this week, and we could not be more shocked. Oops. That wasn’t positive. Dammit. I am not good at this. Anyway.

“The Company We Keep” (written by Barbara Stepansky) picks up where we left out last week: with Roger recruiting militiamen, and with the Frasers heading to Brownsville with the Beardsley baby to meet him. But if last week left us in one place for too long, (Jamie calls the Beardsley homestead “hell” and he ain’t wrong), this week the pacing and narrative moves us right along with a through-line for all our characters that doesn’t leave us hanging. In other words, THIS IS THE PACE THAT WE WANT TO SEE.

The episode starts off with an imminent conflict, a musket fight that Roger is too green to know how to deal with. Then we are switched to The Ridge, a homespun scene that wouldn’t fit with the general tone already set except Bree is immediately put on high alert by the coin in Jemmy’s basket and the Irishman who put it there. Nevermind the fact that Mrs. Bug should know a coin is a serious choking hazard, but it looks like Jemmy is is danger of Bonnet finding him! I AM HERE FOR REAL STAKES.

For the whole episode, the back and forth between characters, sweet moments and tense ones, coupled with the stakes of each situation made for a perfectly paced hour that didn’t drag, didn’t make me lose interest and didn’t leave threads hanging. MORE OF THIS PLEASE AND THANK YOU.

We get back to Jamie and Claire who have stopped next to a creek with wee Bonnie Beardsley, who is the best behaved newborn of all time, and we are treated to one of the best book to screen moments I can remember. Jamie watching Claire cuddle a bairn with a combination of rue, pride, adoration and contemplation is so satisfying for anyone with a heart who mourns the fact that they’ve never been parents together. And that we’ve been robbed of seeing Da!Jamie with his own tiny bairns. But for book readers, the line … “to see you with a bairn, Sassenach,” is just about the sweetest music they’ve mustered.

Speaking of music, Jamie and Claire roll into Brownsville just in time to hear Roger making some. They are certainly making a mountain out of the molehill of Roger’s pipes, but this is the best I’ve heard him sing and the best incorporated song so far. It felt folksy, appropriate, slightly drunk and it didn’t bog down the scene with a neon sign that screamed: THIS IS ALL ROGER IS GOOD FOR.

But it is Jamie, of course, who steps into Brownsville, and starts taking names. Pitch perfect all season, Sam Heughan has fully distilled his countenance, his voice, his stance and his presence on screen into the fine whisky that is Jamie Fraser. Straight up, you can take a big gulp of what he’s giving us as Jamie and it will go down extra smooth. 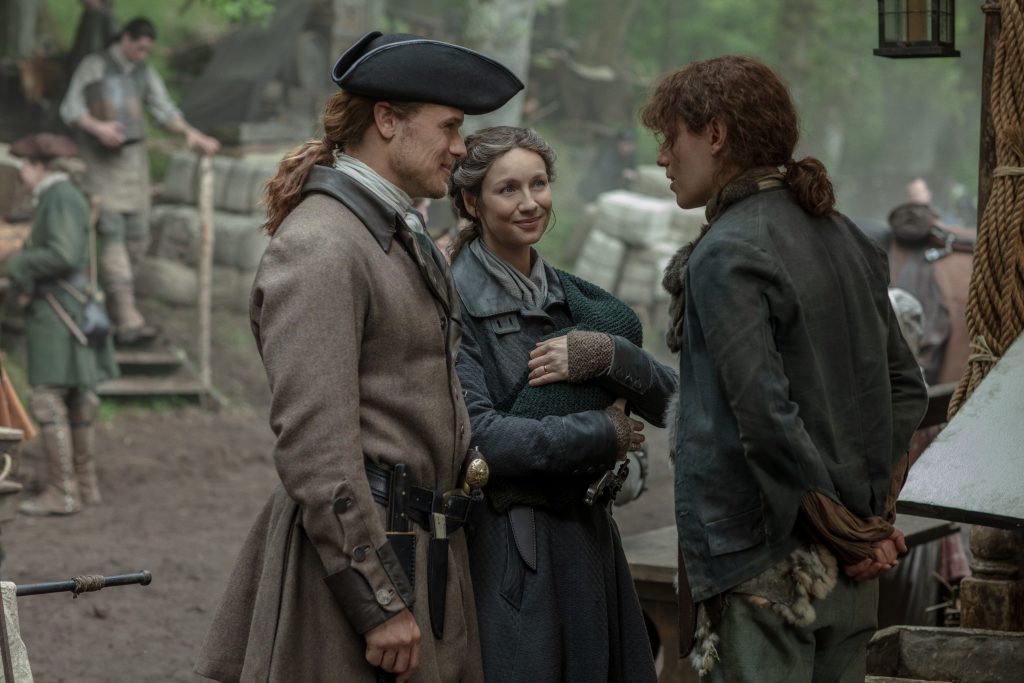 Whether he’s disdainfully setting Roger in his place, telling Josiah he won’t let him fight, performing a traditional sword dance with much chagrin or orchestrating a lovers’ escape while still getting the militiamen he needs, Sam is serving us Jamie looks and book moments like they are both King of Men.

Not to be outdone, and despite not having as dramatic of plot points this episode, Caitriona Balfe showed up as Claire Beauchamp Randall Fraser, making an hour that could have dulled her import into one that shone because of her. Claire’s gentle entrance into the Brown women’s confidence, and their deference to her respectability, is what led directly to Bonnie getting placed in a loving home. Her swift, maternal reaction to Alicia Brown’s situation built the trust that allowed the lovers to find a way to make it work. And her absolute joy at watching her husband entertain his men as Mac Dubh while deftly leading them as Colonel Fraser, was the firelight that made that scene glow.

Outside of her scenes with Jamie, which were great, when Claire reassures Roger that the ride back to the Ridge will be the right thing to do, she reminds him (and us) that Jamie does trust Roger … with the one thing he loves most. ACK. JUST KILL ME DEAD BECAUSE THE FRASERS ARE END GAME AND I CANNOT.

Did We Just Become Best Friends?

The inevitability of Bree and Marsali being close has always lingered in the background of the series, but frustratingly never brought to fruition. Of course these two young women, young mothers, daughters of Jamie Fraser would find much in common. Bree is essentially alone in her peer group, and Marsali left her mother and her home. Their scene wasn’t just a welcome respite from the raucousness of Brownsville, but a perfect scene to highlight what life on the Ridge would truly be like. Plus it highlights two actresses who are truly doing the most. Sophie Skelton’s hauntedness and her relief are palpable. And Lauren Lyle is creating a master matriarch out of Laoghaire’s eldest daughter with her intriguing blend of toughness, warmth and insight. 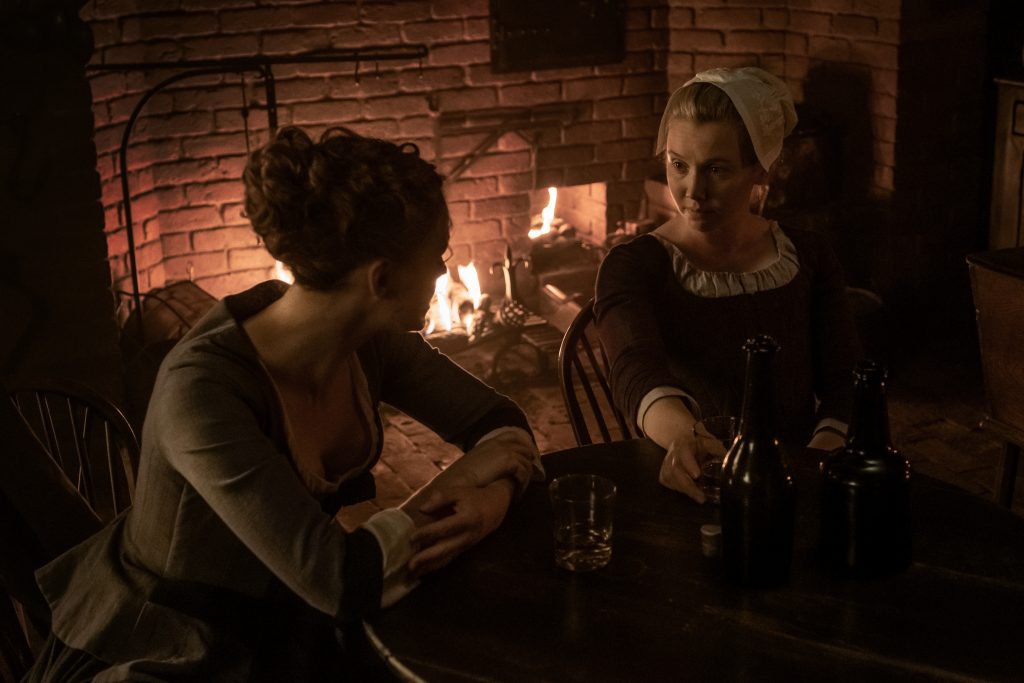 This scene also caps off Bree’s fear that Bonnet is returning in a satisfying way. We see Bree relax as she thanks Marsali for her good counsel. And while we got that scene from the woods, intending to show is the point-of-view of someone watching the Big House, Frances Dollarhyde-style, Bree herself is relieved, her drawings of Bonnet burned. We’re treated to the tension of knowing there is more on the horizon just as she starts to let down her guard.

No, the Frasers of The Ridge are HERE, actually

Fight me about Jamie and Claire scenes, and I will tell you that last season we had to squint and pick episodes apart with tweezers to find them. That’s what makes episode 504 such a goddamn treat. From the first moment with Bonnie, we see their connection as Jamie looks back at his wife, with child. They enter Brownsville as a unit, him helping her down and not leaving her side for long as she finds what she needs. 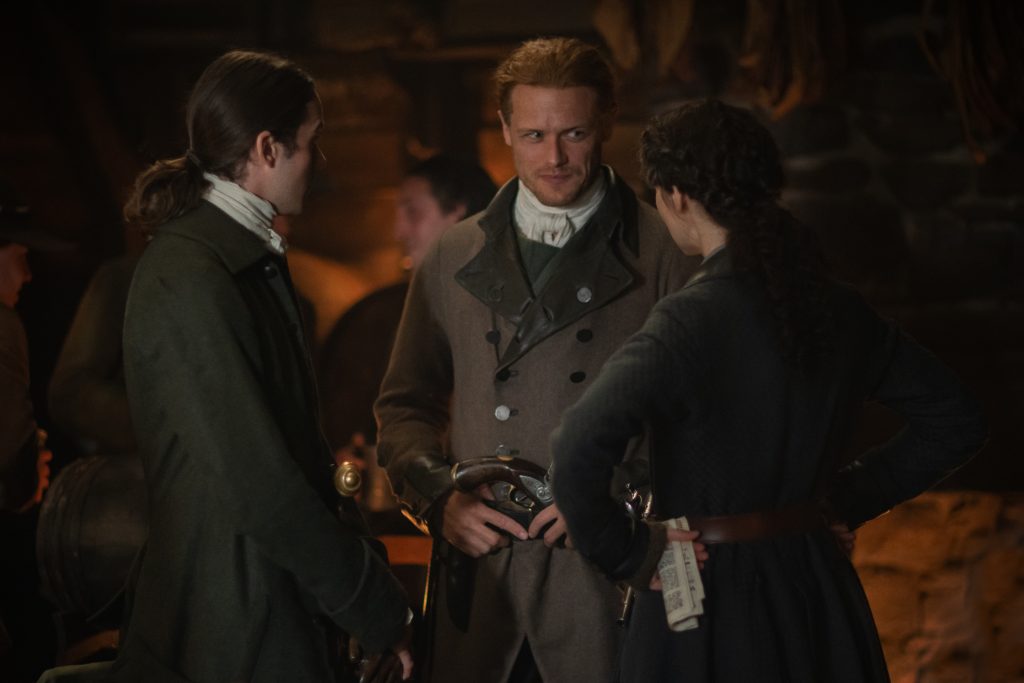 She strategizes with him when he learns that Roger as screwed the Brownsville pooch, but she also brings him back down to level with her empathy. They share looks of love and longing and even exasperation (when Morton starts sucking face with a very young Alicia). And it is the drunk and stumbling scene in the woods that feels truly ripped from the pages of The Fiery Cross. When they are together they are at their best. And they know it. God, it’s good to see the Frasers.

Someone please give Cesar Domboy more to do. He is infinitely watchable and every single moment of Fergus on screen was perfection. Even in the background, holding a whisky glass and a cocked eyebrow.

I don’t have time to go through every moment that I loved in this episode, but I do have time to talk about them all with you on Hangoutlander, Monday night at 8pmEST. Suffice it to say, my favorite part was watching Drunk!Claire fully sober up as her beaming husband asked if he could give her one last chance for a bairn. THAT FACE.

What were your Top Moments from Outlander Episode 504?

The Cool Table@thecool_table
1.0K Following 1.0K Followers
@jamiesrule @jamadoria @coolstorymere I know you know this, but I"ve had pixie cuts off and on since 1997 and m*n h… https://t.co/VsXyyN7PpC
2 hours ago
4
@LSULeslie @schizoreads I’ve legit never even heard of this
1 hour ago
@chels__ebooks Yes! Josh O’Connor supremacy! I watched this right after I got obsessed with The Durrells ❤️❤️❤️
1 hour ago
@maria_gb75 Keep him
1 hour ago
@baskinsuns AGREED. I love love loved that as a kid (and vowed to be able to do it so someone would love me)
1 hour ago
1
Archives
Entertainment, Netflix, TV

All You Need Is Love and Hawaiian Tropic