Tonight’s episode of Outlander might be called “Free Will,” but ironically, it’s proof positive that the show works best when the writers employ less of their own. In other words, Outlander Episode 503 is a glorious return to the source material (Diana Gabaldon’s The Fiery Cross), and it’s better for it.

We’ve always said that the best moments from the STARZ series is when the writers cleave as close to the books as possible. Jamie and Claire Fraser are creatures of carefully crafted character; their desires, distinctiveness and dialogue work together to weave two fully realized people that readers fall in love with instantly. When the writers shake out the books and give us living versions of those characters, the show is infinitely more watchable. Bottom line: Diana gave us the goods; might as well use them.

This episode did just that. In The Fiery Cross, Jamie and Claire, Roger and Fergus, leave with a contingent of men from the Ridge to summon a militia under Jamie’s command and Tryon’s banner. On the way, the catch Kezziah and Josiah Beardsley stealing from them and find out about their dire circumstances at the Beardsley homestead. Jamie and Claire go to investigate and retrieve their indenture. They find a hoarder’s nightmare, a belligerent and berated Fanny Beardsley, and a tortured and dying old bastard. Here are the top moments of the episode.

There’s a gorgeous bit of romance novel trope that frankly doesn’t get enough play and that is: the hero coming home from a long journey to look relaxed and lovingly upon his homestead, quiet and still, and finding his beloved wife equally happy, healthy and at home inside. It’s a gorgeously gooey mix of security and sensuality and intimacy that Jamie gets to savor, and we as the audience get to appreciate it for what it means about the Frasers. Namely, that this is their end game. Coming home to one another. Having a home together. Being at peace. Being one. 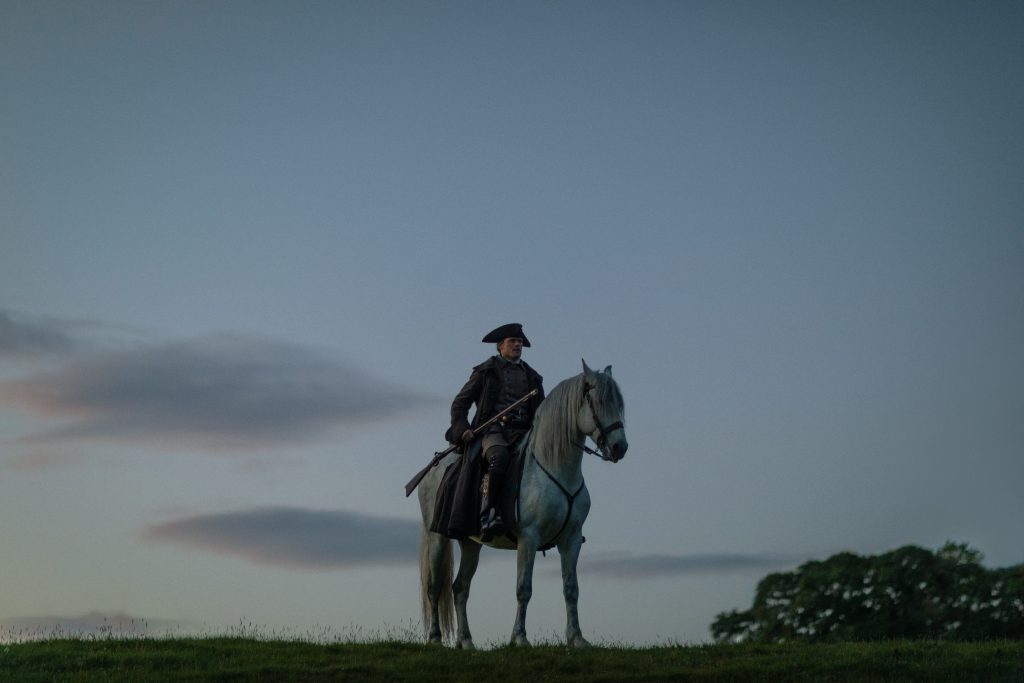 Jamie lived for 20 years never coming home to a warm bed with Claire in it. Their life is fraught with dangers but also with unaccountable magics that could whisk her away at any moment (I mean, they really don’t know anything about this time traveling nonsense they have gotten themselves into). The relief and satisfaction and gratitude that Jamie expresses when praying over the sight of his sleeping wife is a balm to our souls because it is the soul of why we care about these characters. I could watch a million moments that end and begin with their love, and last season was remiss for not having this type of intimacy more often (hint: the complaint wasn’t about sex). If this is the scene that Sam Heughan referred to as “making love without making love” then sign him up for showrunner because that boy gets it. Trope me up.

It doesn’t end there, though, for important Jamie and Claire moments. Their simple conversation about Knox, the future stramash with the Regulators and calling up the militia is reminiscent of how they related to one another and to their circumstances in season two: talking it out together. They don’t argue about what must be done, and Jamie doesn’t try to convince Claire to stay home. Quite the opposite. They understand one another perfectly, and Jamie knows he needs her. Always has, always will.

We’ve all been very excited to see more Marsali in this episode and last. But this show needs infinitely more Fergus Fraser. More than any other man on the Ridge, Fergus is Jamie’s right hand (pun intended), but his role in the show feels as diminished as Geordie Chisholm’s. He should be more integral to their day-to-day and to Jamie.

In his scene with Jamie on the porch, we see a little bit of this as Jamie relies on him to do something he might not ask anyone else to do. And yet. Chekov’s Gun had me feeling that someone was definitely going to find out Claire was a witch with whatever was on the other side of that paper Fergus used. Surely they weren’t just wasting all those frames on him finding that paper that had writing on it. Something is coming from that, and I don’t like not knowing what.

There are a few images that are iconic to the world of Outlander. Jamie in his kilt. Claire lying, well satisfied, in the heather. Jamie and Claire in soft linen, abed and talking by firelight. The scene around the campfire brought another to mind with a very particular image: men around the fire out of focus while Claire’s back is silhouetted and centered in the foreground. The dialogue was pulled straight from the book, and so was that very lovely shot.

Essentially, I can’t look at these two on screen without thinking about Lizzie, and I haven’t even read that book yet. Y’all spoil all the good stuff for me, and I don’t even care. (Also this still is hilarious because that’s not Paul Gorman as Kezzie. LULZ.) 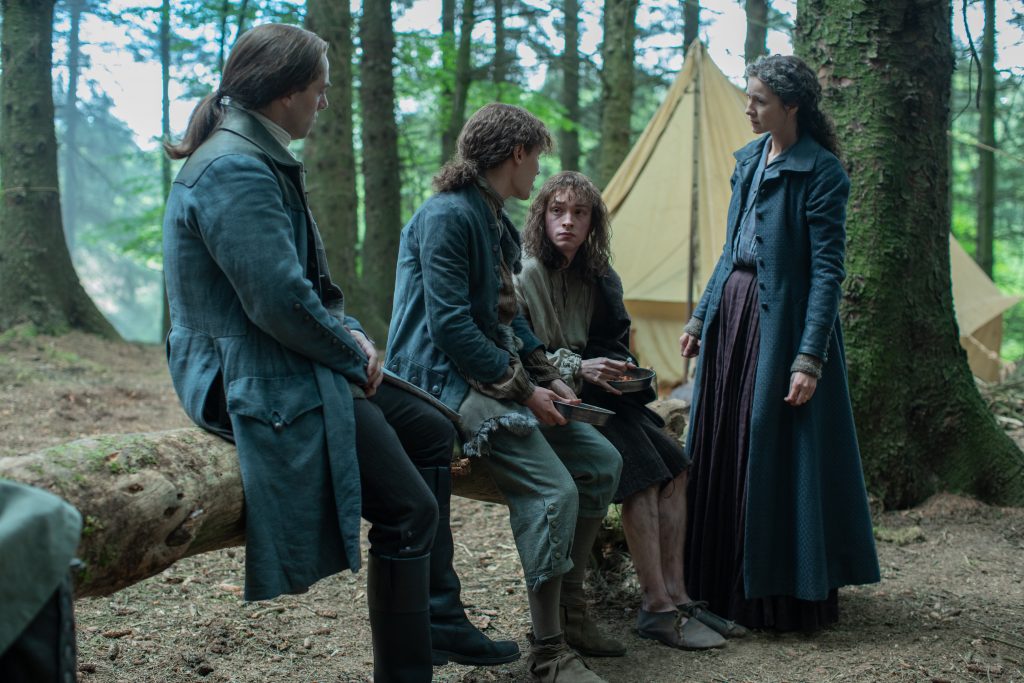 The Frasers and the Haunted Homestead

The last half of the episode hit all the good notes that the spooky and disgusting story of the Beardsley’s deserved. The highlight for me was Bronwyn James’ performance as Fanny Beardsley. She played a bubbly and happy-go-lucky girl on Hulu’s Harlots, and it was lovely to see her step into this haunted role.

“And your name is … Sassenach?”

“Only to my husband.”

What were your top moments of episode 503?

Join us TOMORROW night for Hangoutlander, our live recap show for Outlander. We still have plenty to talk about. Don’t think I didn’t see Jamie tapping his fingers on that tabletop or that anemic goodbye between him and Bree. Oh, I saw it ALL. And if you missed last week’s discussion, watch here:

The Cool Table@thecool_table
1.0K Following 1.0K Followers
Yesssssss https://t.co/rGaJC4TAJ4
10 mins ago
1
Latto Brought Big (Villain) Energy to #TheBachelor for episode two of Zach's season. https://t.co/qyqmqEZIpH
10 hours ago
1 4
@pagemelt I know nothing about them but it's a good assumption since the album is titled Dear Wormwood. I have so m… https://t.co/rXXSQbWwlG
12 hours ago
2
@pagemelt isnt the whole album based on the screwtape letters? RED FLAGs
12 hours ago
1
@MrsKowski unfortunately yes
13 hours ago
Archives
Books, Entertainment, Movies

E.L. James’s The Mister is Coming to Movie Theaters…But Why?