Despite being an undeniable fan of fantasy novels and magical realism, Simone’s more sedate and realistic Priest series about the Kansas City family of hot Catholic brothers is my favorite of all her books. Perhaps because the idea of having a hot priest leave his parish for you, or being with a sinner so hot that he gets you to renounce your plans for the convent SEEMS attainable, but may in fact be just as fantastical as her re-imagining of Arthurian legend in the US political system. In other words, the world of the Priest books may seem like they aren’t fantasy, but they definitely are.

However, what I love the most about them, despite the undeniably hot smut, is the ease with which Simone incorporates spirituality and sexuality, a feat of Tiffany Reisz-ian proportions.

When Saint hit my Kindle library earlier in September, I was ready to get down on my knees. The third installment in the Priest series promised to follow the playboy millionaire Bell brother, Aiden, who in our last glimpse of him in Sinner got caught with his pants down and with his brother’s best friend, Elijah. Lord have mercy.

And as ready as I was, I couldn’t get passed the initial premise: how in the world would it be possible for an already-in-love Aiden Bell to leave his life and his relationship to join a monastery? He’d had an older brother leave the priesthood for the love of his life. He’d had another older brother coax a postulant away from her impending vows in order to make babies with him instead. SURELY he would just go to therapy.

I couldn’t get into it. I didn’t believe it was possible.

But she brought me through it. As much as I wanted to skim to the smut (which I knew would be good), Simone told a rich story of spirituality, loss, mental illness, sexuality and redemptive love that made a truly fantastical premise believable.

AND she referenced Richard Rohr, my favorite Franciscan. I need nothing else.

I can’t have Elijah Iverson.

I can’t have Elijah because I’ve chosen God instead. 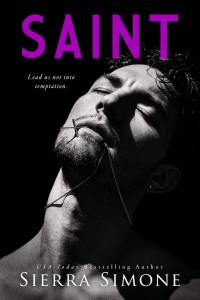 The Bell brothers, though . . . well, we don’t exactly have the greatest track record with vows. But I’m determined to do this monk thing right—to pledge myself to a cloistered life and spend the rest of my years in chastity and prayer. But now Elijah’s here. He’s here and he’s coming with me on my Euro

pean monastery road trip, and between the whispered confessions and the stolen kisses and the moments b

ent over an ancient altar, my vows are feeling flimsier by the day.

And vows or not, I know in my heart that it would take more than a good and holy monk to resist Elijah Iverson right now. It would take a saint.

And we all know that I’m no saint.

This is the third full-length M/M standalone in the Priest Collection, featuring Father Bell’s brother, Aiden Bell. You do not have to read Priest or Sinner to read Saint.

The Cool Table Has a Podcast Now!@thecool_table
1.0K Following 986 Followers
@pagemelt Telling Tales by Charlotte stein has some amazing tehanu references for weird polyam erotica
21 hours ago
1
❤️❤️❤️ https://t.co/rXQCGiIhLp
1 week ago
8
RT @BlessAmysHeart: Please note I’m doing a chemotherapy treatment on my face which is why you have this “Janice, Holly, Norma…and Dooneese…
2 weeks ago
1
RT @andeesings: I’d like to apologize for derailing this conversation several times. #bingerton
2 weeks ago
1
@jamiesrule Thank you!
2 weeks ago
1
Archives
Entertainment, The Bachelor, TV