Katie Thurston is dressed in red, the driveway of a Hyatt in New Mexico is wet, 30 marginally attractive men are sweating in limousines like it’s prom night, and I’m drinking wine with an ice cube in it while wearing those Tiktok leggings I got influenced into buying. The Bachelorette is back!

Based on the number of dudes who were shown bawling in the trailer for the season, we’re in for a treat. Don’t feel bad, we earned this.

Katie Thurston is The Bachelorette 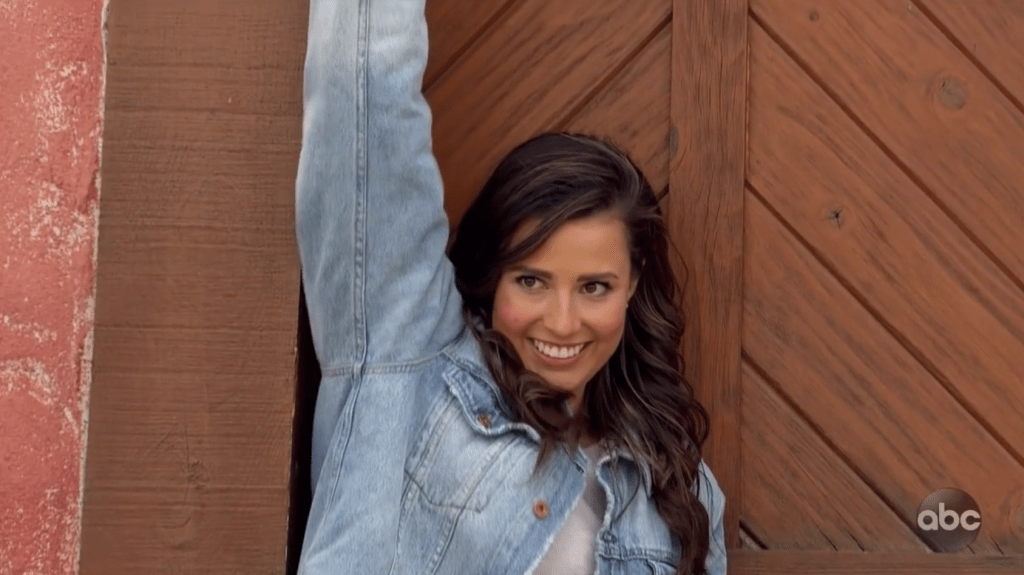 If Hannah Brown’s ridiculously good ratings taught us anything it’s that America loves an awkward, yet confident Bachelorette. I swear, if this season gives us an updated version of my Tyler Cameron crush without all of the Gigi/quarantine crew baggage I will cry happy tears.

Basically, Katie’s intro wanted us to know that she was raised poor by a single mom who moved a lot. Wait do you smell that? Oh, got it, it’s the stench of a fear of commitment in the air.

Kaitlyn and Tayshia Save the Day 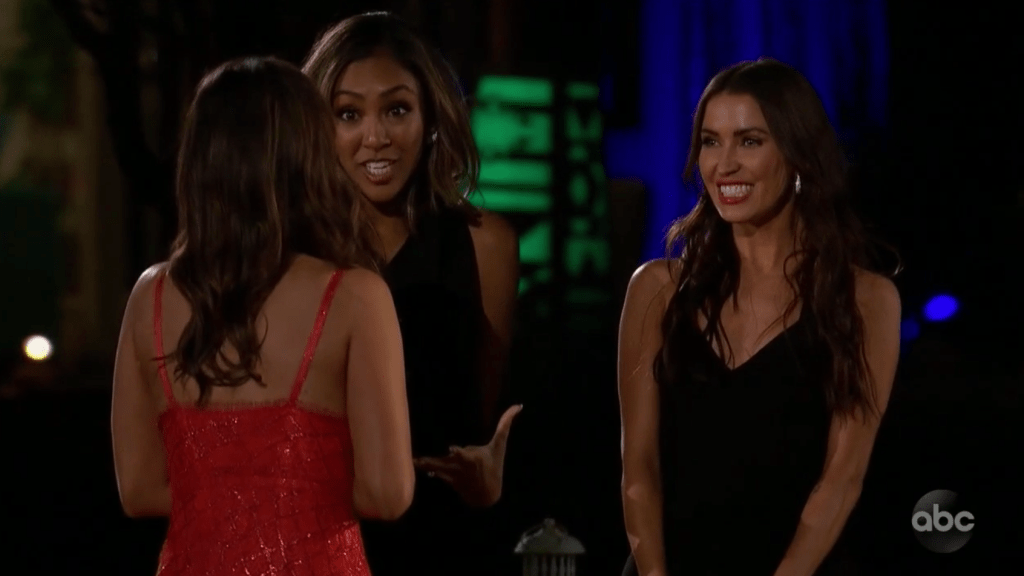 Listen, I’d rather listen to Peter Weber talk about line-dancing than write another word about Chris Harrison’s “temporary” exit from the franchise. I’m that over it. Instead, past Bachelorettes Tayshia Adams and Kaitlyn Bristowe showed up to fill the role and they’re hilarious at it.

Whether they were dishing out advice to Katie or eating popcorn while they laughed at the limo entrances, their every scene was great.

All I’m saying is, employ more women in positions of authority. K, thanks, bye.

Obviously, the best part of any premiere episode of The Bachelorette is watching hot men make a first impression. If you want costumes and awkward sexual innuendos (sometimes at the same time) this season has you covered.

Tre (26, Software Engineer) Popped out of the back of a pick-up truck that he had filled with the plastic balls you find in the ball pit at a McDonald’s. If my past experience as a parent has imparted any wisdom, I hope he’s prepared for a raging case of Hand, Foot, and Mouth disease.

Quartney (26, Nutrition Entrepreneur) made a bunch of jokes using “Q” words like the first letter in his name that somehow devolved into overt sexual innuendos about not being able to stop using his mouth. Gross, but based on his job title I was more concerned that he’s going to start selling MLM products at the rose ceremony.

Hunter (34, Software Strategist) showed up with a fish in his hands because he’s “kinda a catch.” Hold on, I’m officially changing his name to “Fisher” in my notes.

Christian (26, Real Estate Agent) brought a golden genie’s lamp and said in his thick Boston accent, “I don’t know if there’s a genie in here but I’m hoping we can rub one out together.” I’m gonna have to park my car in Harvard yard just to get away from that joke.

Connor B. (29, Math Teacher) arrived in a cat costume complete with furry paws and painted-on whiskers. He made cat puns that made me want to die, but I have to commend him for committing to scratching at the door until someone else let him into the cocktail party.

Micheal (36, Business Owner) Gave Katie a two-hundred-year-old family heirloom watch. Then, after she freaked out, he told her he got it from the airport and made some joke about time going quickly. I’m assuming that, since he’s a single dad to a four-year-old, his standard of humor has died a slow death after one too many episodes of Blippi.

Gabriel (35, Entrepreneur) asked Katie if he could share his favorite hug with her. Then he wrapped his arms around her and did this really deep breathing thing that is probably nice if you’re not meeting for the first time.

Kyle (26, Techincal Recruiter) said he was “going to be brief” and then pulled a pair of tightie-whitey underwear out of his pants and handed them to her. Stop doing that.

James (30, Software Something – I can’t remember) Showed up in a giant wooden box and then proceeded to stay in the box the entire evening. If you know anything about The Bachelorette you know the cocktail parties can last until the next morning. If you know anything about women and gifts you know the gift never lives up to expectation. When she opened the box later she said that something intrigued her about James. It’s that he turned out to be hot Katie, it’s fine. 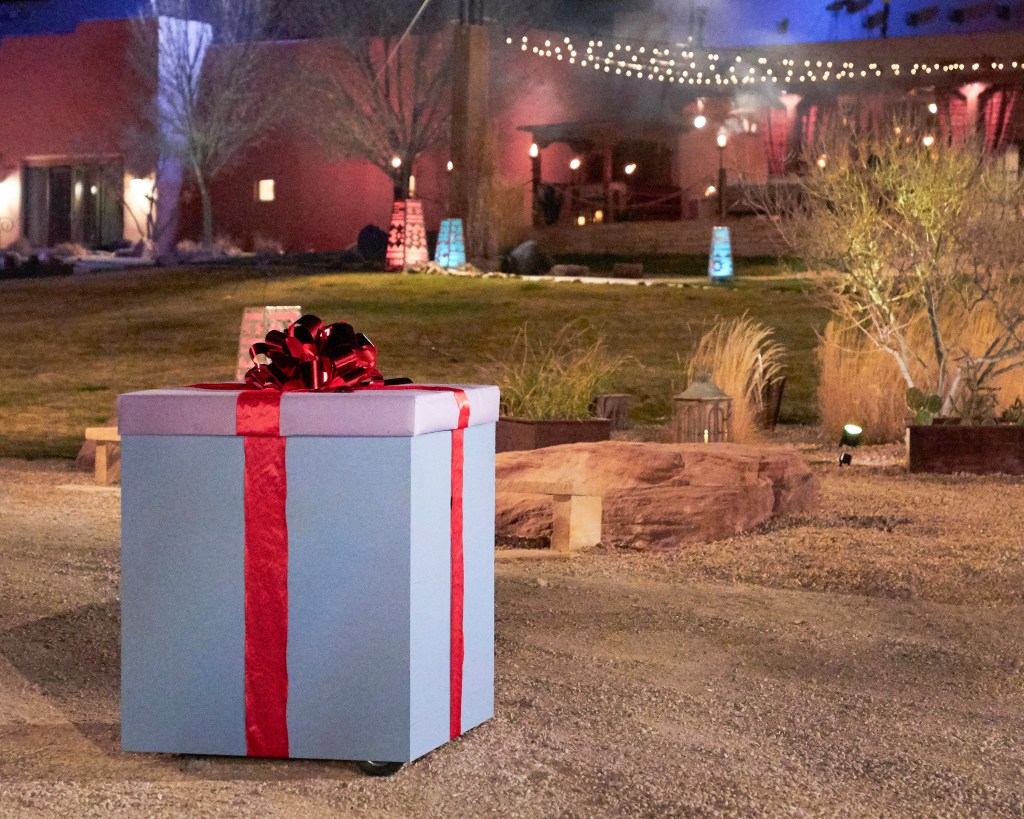 Andrew S. (26, Pro Football Player) drove up in a vintage car complete with a horn that makes that “aahhooooga” sound. Then he introduced himself with a British accent. A fake British accent by way of Chicago, of course. I don’t even care, he’s so delightful.

Jeff (31, Surgical Skin Salesman) arrived in an old RV that he referred to as his home. I still don’t know if he was joking. Later, Jeff took Katie for a tour of the inside where he had a plastic tray of carrots and ranch dip and made jokes about being a creepy guy in a van. Yeah, we picked up on that vibe already, Jeff.

Justin (26, Investment Sales Consultant) told Katie that he’d spent pandemic life getting out all of this pent-up aggression with a “deep stroke, and stroke and stroke it out.” He’s a painter. I’m still uncomfortable.

Cody (27, Zipper Sales Manager) made a big deal out of wanting to introduce Katie to someone really important in his like who had been a shoulder to cry on. It was a blow-up doll named Sandy. We have a lot of ground to make up for 2020 when it comes to men, don’t we?

Other than the absolute gluttony of cringy sex jokes, I think I…dare I say…liked Katie’s cast? I don’t even know who I am anymore.

The first kiss of the season went to Justin the stroking painter who gifted Katie with a painting of some roses and some cheesy lines.

The best banter of the evening went to Tre who managed to make meaningful conversation while buried in a ball pit located in the back of a pick-up truck.

By far the hottest was Thomas (28, Real Estate Broker) who was the first out of the limos. Yes, I put Thomas in my top four based on his bio, but his photo did not do the man justice. Katie and I were like, “Do they all look like that?” when he walked out.

The easiest chemistry of the night went to Connor B. the cat who totally swept Katie off her feet with his genuine interest. I think Connor B. is here for the long haul, but if I have to watch a close-up of their kissing again, they’re really going to need to work on the tongue action. I think they took the cat lapping thing a little too literally.

The biggest surprise of the night was Greg (27, Marketing Sales Rep) who was a total cinnamon roll of a man. He gave Katie a pasta necklace that his 3-year-old niece had made and seemed truly kind and into her. It doesn’t hurt that Katie said he looks like her ex.

Bring on the Drama

Unlike the entire last season of The Bachelor, there was no drama on this episode at all. Like at all. Okay, at one point some guy named Aaron told the blow-up doll guy, Cody he doesn’t like him and he never has with absolutely zero context. But Cody was like, “Dude, it’s been 15 minutes, chill.” Is this what inner peace feels like?

Katie Thurston Throws a Curveball with Her First Impression Rose

Without, you know who around to pull his weight, security guard Big Paulie brought the first impression rose out on its tray to cause mass anxiety. I thought the rose was going to Connor the cat for sure, but instead it went to sweet cinnamon roll, Greg. Katie told him that she wants to reassure him of their connection and hopefully take some of his nerves away. Then they shared a super hot kiss that in no way reminded me of a cat lapping up milk. Progress. 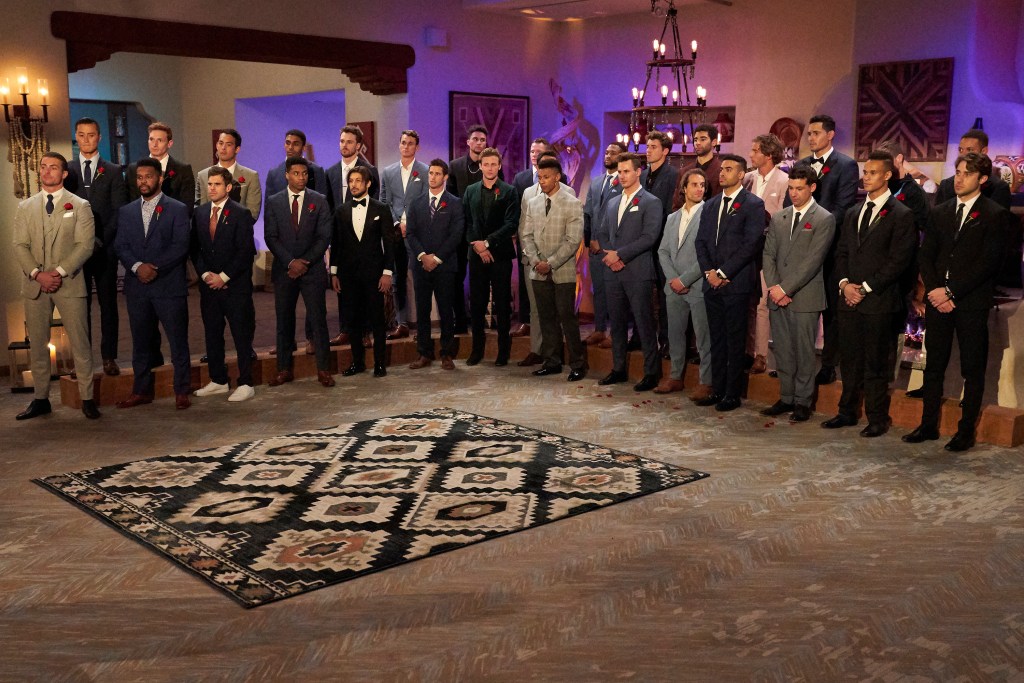 Listen, there were 30 men on this episode and a zero percent chance of me remembering their names. All you need to know is that ballpit Tre got the first rose, Boston accent Christian was so nervous he was almost sick, and blow-up doll lover Cody got the last rose.

Just like that, The Bachelorette sucks me in again. I didn’t know if I had it in me, but who did I think I was kidding? Who do you have in your top four? Mine are Thomas, Greg, Connor B., and Justin based on the premiere. Did you see that Blake Moynes is going to show up later in the season? Let’s talk in the comments.

The Cool Table@thecool_table
1.0K Following 1.0K Followers
Yesssssss https://t.co/rGaJC4TAJ4
21 mins ago
1
Latto Brought Big (Villain) Energy to #TheBachelor for episode two of Zach's season. https://t.co/qyqmqEZIpH
10 hours ago
1 4
@pagemelt I know nothing about them but it's a good assumption since the album is titled Dear Wormwood. I have so m… https://t.co/rXXSQbWwlG
11 hours ago
2
@pagemelt isnt the whole album based on the screwtape letters? RED FLAGs
12 hours ago
1
@MrsKowski unfortunately yes
12 hours ago
Archives
Disney+, Entertainment, Pop Culture, TV