Katie Thurston’s season of The Bachelorette premieres on June 7th which can only mean one thing. It’s time to superficially judge 30 hot and mostly employed men based on their bios and a single badly lit photo. Ranking the cast of The Bachelorette? I must have been really good in a past life to earn this job.

In previous seasons I’ve handed out unsolicited advice, or given the cast superlatives. This season, I’m tired after the hell that was Matt James’s season, so I’m jumping straight to the point. Here’s my unofficial ranking of Katie Thurston’s future ex-boyfriends.

The Best of the Cast of The Bachelorette

It’s not hard to land in the “best” category. You just need to not sound like a complete tool, look somewhat appealing in your photo, and make me want to see Katie turn you into a ball of lovesick insecurity by the time overnight dates roll around. Easy!

Andrew S. (26) is a professional football player…in Vienna, Austria. I do not care about sports in any way, but all women would be down to date a man with a professional athlete’s body and frequent flier miles to Europe. This is a no-brainer. Sure, his claim to want five kids is a liability to your internal organs, but he’s close with this 96-year-old grandmother so it balances out.

David (27) is a first-generation American who likes pizza and lives in Nashville. I, know, super basic. But, his favorite boyband is *NSYNC so he’s an automatic favorite of mine.

Thomas (28) is a real estate broker from Poway, CA who used to wear Ed Hardy in high school. It’s okay, Thomas, I wore monochromatic velour sweatsuits with the word “Juicy” stitched into the butt. I’m not judging. He made the top of the bunch because his favorite date is “a meticulously curated tour of the best burritos, burgers, and brunch” the city of San Diego has to offer. The three B’s?! Swoon.

Kyle (26) is a technical recruiter from Fort Lauderdale whose hero is Steve Irwin. He is looking for a romantic comedy type of love story which makes perfect sense for this show since it’s romantic and a joke. I’m not sure why I like him, but his bio gave good vibes overall. It’s been a rough year, Kyle, please don’t disappoint me.

To fall into the “good” category in this unofficial ranking of the cast of The Bachelorette you need to have at least one fact that makes you stand out from the rest of the men. These are the guys I imagine will make it to the top half of the cast and will definitely make an appearance on a future season of Bachelor in Paradise. Or at least they’ll be selling us tooth whiteners on Instagram by summer.

Aaron (26) is an Insurance Agent from San Diego. He landed on the good list because one of his biggest fears is saber-tooth tigers. I respect a healthy fear of a prehistoric animal.

Cody (27) is a Zipper salesman also from San Diego. I don’t know what’s in the water down there but I’m into it. Cody is a surfer with a six-pack whose favorite TV show is Jersey Shore. GTL, Cody. G-T-L.

Connor B. (29) is a math teacher from Nashville who has a master’s degree in medical physics. I have no idea what that is, but I’m easily impressed.

Jeff (31) is a surgical skin salesman from New Jersey. Jeff is an Italian family guy who loves pasta. I put him on the good list because he sells artificial skin and at my age, nothing has ever sounded sexier.

Josh (25) is an IT consultant from Florida. He loves his family and starts celebrating Christmas in October. I’m not typically a Christmas before Thanksgiving kind of person, but I have a feeling he gives good gifts.

Michael (26) is a business owner and single dad from Ohio. The only reason he made the good list is that he gives me Evan Bass vibes and “makes a mean plate of dino nuggies”

Hi guys, I see you’ve found yourself in the neutral category of the cast of The Bachelorette. Don’t feel bad, every season needs its pawns. I’m sure you’re really great men. One of you could even make it to the end. I mean, you’re all good-looking, and Conor C, you even look vaguely like Jamie Frasier. Yeah, you! Alas, based on your collective bios you’re going to be normal AF, which means boring TV. Sorry, I don’t make the rules.

I can’t imagine that when the cast of The Bachelorette filled out their applications to be on the show that they ever thought people like me would be out here dissecting their every word. Too bad suckers! Something you said in your bios rubbed me the wrong way and now you’re on this super legit ranking of the cast in the bad category. Better luck next time.

Andrew M. (31) is the deputy district attorney of Newport Beach, CA. I could probably stop there. Unfortunately, he also mentioned that he “tebowed” on stage at his college graduation like it was a good thing.

Austin (25) is a house flipper from Southern California. He seems nice enough, but he also works out 6 days a week. I can’t live with that kind of negativity in my life.

Gabriel (35) is an entrepreneur from North Carolina. At first glance, his bio seems great. Then he had to go and ruin it by saying he “doesn’t understand the concept of athleisure wear.” Do I need to bring up my velour Juicy sweatpants again Gabriel?

John (27) a bartender from San Diego seems really likable. Sadly, he likes going to EDM shows and thinks swing dancing is fun. We really could have been something, John.

Marcus (30) a real estate agent from Oregon seems like a good match for Katie. He comes across as confident and gentle with a good sense of humor. Too bad he also calls himself an “amazing lover.” I don’t believe you.

Marty (25) is a dancer from Reno. Marty’s self-declared tagline is “Marty brings the party” and he explicitly states that he doesn’t want a woman who stares at her phone all day. Call me after a decade of marriage and 3 kids, Marty.

Mike (31) is a Gym Owner from San Diego. Seriously, what’s up the number of men from San Diego this season? He’s a family man and ex-professional baseball player, but, get this, he hates dessert. I can’t.

Quartney (26) is a nutrition entrepreneur from Texas. Quartney loves to country line dance. I’m sorry, Quartney, we’ve already been down this road with Peter Weber. It’s not pretty. 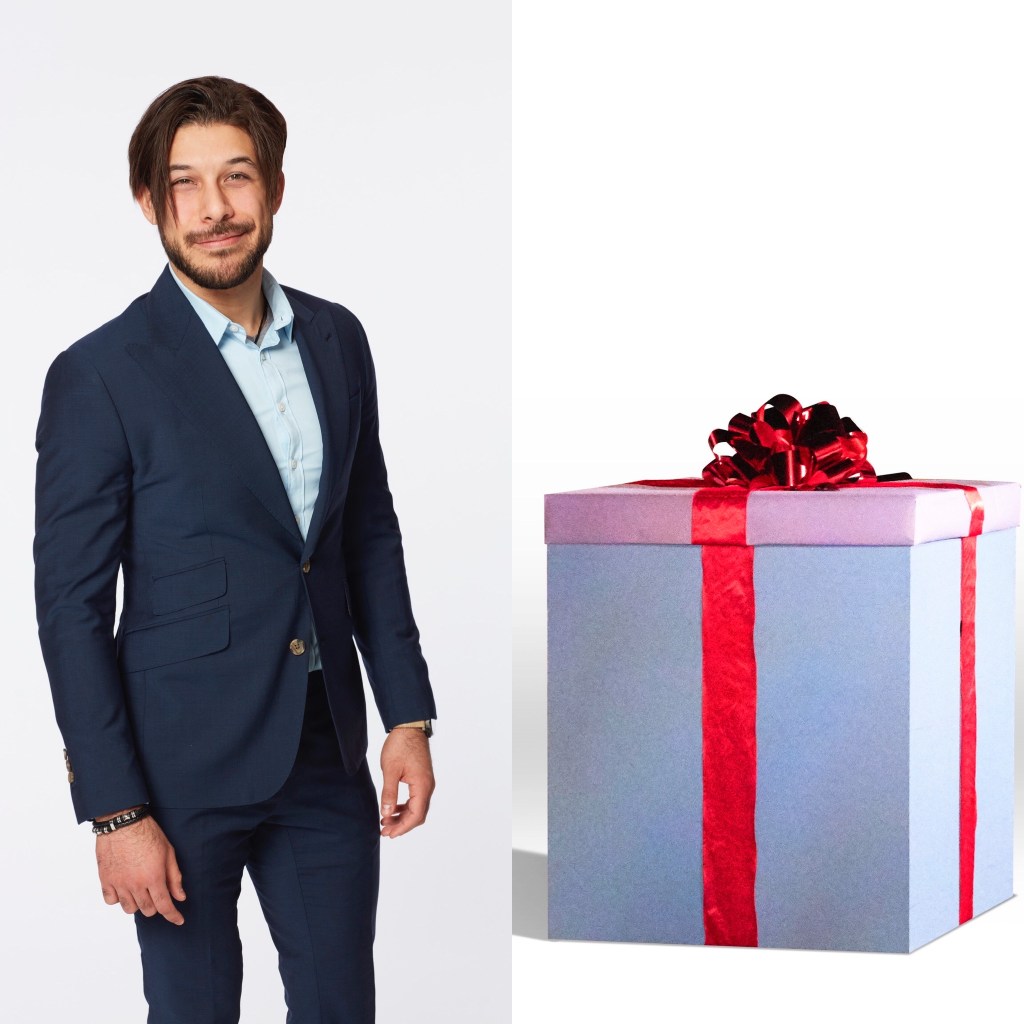 Listen, could I be wrong about who the worst of the cast is going to be? Of course. But, if I’m going based off of the bios, I think I nailed it.

Brandon (26) is an auto parts manager from Queens, NY. He loves learning new languages, Japanese and Korean R&B and hates ultimatums. All of that seems relatively normal, but then again, he also likes to attend the occasional rave. What is this 1998? Make it stop.

Box (?) from ? is already annoying me. Idris Elba could hop out of that box and I’d still hate him. Go away.

That’s it for an unofficial ranking of the new cast of The Bachelorette. I’m not sure if I’m more excited now than I was before but June 7th better hurry up and get here. Who do you think is going to make it to the end? Who is in the box? Have you joined our Bachelorette Fantasy league yet? Let’s talk in the comments.

The Cool Table Has a Podcast Now!@thecool_table
988 Following 939 Followers
Shrimp-gate, Baywatch, Singing in underwear, oh and, Kaitlyn Bristowe made everyone cry. Must be #TheBachelor https://t.co/fD7xk1maFJ
3 days ago
1 3
We are going to do a Where's Waldo but with Amy, as in Where's Amy in #GildedAge Newport. Since she lives there. https://t.co/RKLfEbA4P5
3 days ago
4
RT @RebeccaCokley: "You’re still making that f---ing backwards story about seven dwarfs living in a cave together," says Peter Dinklage. "W…
3 days ago
1.5K
Figuring out why I’m loving @Station11onmax by figuring out why I hated @TheLastDuelFilm https://t.co/NIHG4duULO
3 days ago
RT @BlessAmysHeart: When @bethorne writes the smartest shit.
4 days ago
1
Archives
Current Events, News, Pop Culture, Sports

Kaitlyn Bristowe Made Everyone Cry on The Bachelor