I hope you like your episodes of The Bachelorette a little on the dirty side because week two of Katie Thurston’s quest to find love among aspiring Instagram influencers was filthy. No, it was literally dirty. They went camping and then a bunch of men started mud wrestling in a haystack pit.

I love this show so much.

Not to put me out of a job here but as a quick recap, there are only 23 men left in Katie’s reverse harem at the beginning of this week’s episode. They’re still in a surprisingly cold New Mexico where Kaitlyn Bristowe and Tayshia Adams are sharing host duties. Oh, and Katie really likes the guy who dressed up like a cat and the one who gave her a pasta necklace. Now, let’s watch some attractive twenty-somethings make some bad decisions on national television, shall we?

The Greatest Lover of All Time 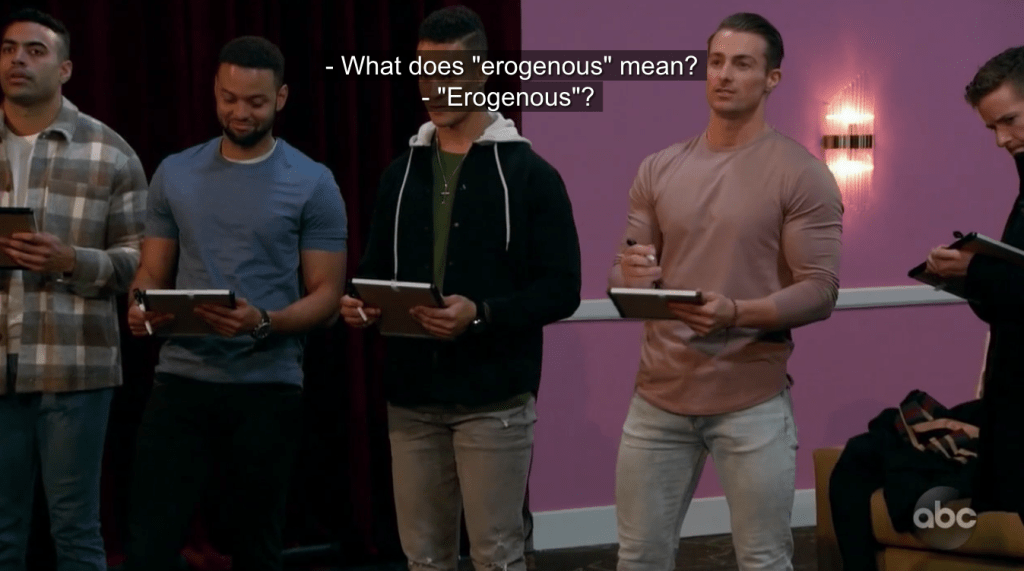 Hey, has anyone mentioned that Katie is sex-positive in the last five seconds? No? Okay, then here comes comedian Heather McDonald to crown the “Greatest lover of all time,” through a series of increasingly cringe-inducing tests.

Meanwhile, crucifix-wearing Mike P. was flipping out, like in full-body sweats, because he’s a virgin. An ex-athlete who is a virgin? Doesn’t anyone at ABC remember how that turned out last time?

The men performed in a weird talent show where they showed off their sex skills with varying degrees of success. Connor B. the cat sang a song that rhymed girth and worth. Tre put on an x-rated puppet show that included the safe word “peaches.” James in a box put his dick in a box. Justin heckled Karl’s long-winded speech. You know, the usual.

Then Mike read her a letter he’d written to his future wife in which he told her he’s saving himself for marriage. Katie…cried? Then Heather McDonald crowned him “the greatest lover of all time.” We all know how this is going to turn out, put the poor guy out of his misery.

Connor B. the cat clawed his way farther into Katie’s affection at the after-party, but I had to close my eyes while they kissed because it’s still so awkward. Too bad, Connor B., because Josh Murray-lite Thomas can all caps KISS. Like a thigh grabbing, pulled her over his lap, super hot kiss. Clearly, he got the date rose. Did I mention the thigh grab? I need a moment.

Last week, Katie gave sweet cinnamon roll Greg the first impression rose which would typically mean he’d be stuck in group date hell for at least a few weeks. Not this time. Katie gave him the first one-on-one date of the season. I hope the rest of the men are wearing their running shoes because they have some ground to make up.

Greg and Katie wore matching plaid jackets on a day date by a river where they set up a tent, went fishing, and carved a toilet out of a bucket with an ax. And people think romance is dead.

Here’s the deal, Greg is here for the long haul because Katie said taking him fishing is as close to introducing him to her deceased father as she can get. No pressure, Greg. 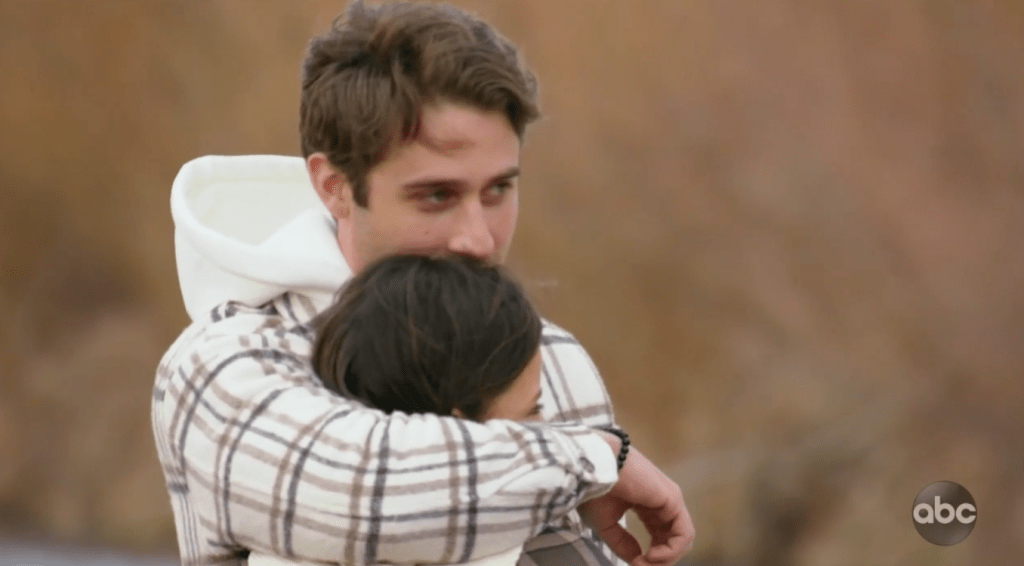 At first, his response was a bit stilted and I got nervous for good ol’ boy Greggers, but that night he explained that his dad also passed away unexpectedly. Guys, this bond is solid. Someone call Neil Lane.

Listen, there are only so many things you can do when you’re quarantined at a Hyatt in New Mexico. It was only a matter of time until they made the men mud wrestle on a group date. I’m not mad about it.

You know who was mad? Aaron.

The rest of the guys (John, fake accent Andrew S., Kyle, Brendan, Fisher) wrestled good-naturedly while Katie, Tayshia, and Kaitlyn laughed their collective asses off. But not Aaron. Apparently, Aaron and blow-up doll Cody have unnamed beef from back home in San Diego. Oh, is that why they sliced in their argument with zero context last episode?

Anyway, Aaron dominated Cody in the mud pit and then tattled to Katie during his awarded one-on-one time. I still don’t know what Aaron’s problem with Cody is but he said something about honor and integrity. Katie was like, “WHAT?! Someone might not be here for the right reasons?!” and sent him home.

Don’t be sad, we knew nothing about him and he showed up with a blow-up doll.

After things calmed down, the date rose went to fake accent Andrew S. who was the first to comfort her. Keep your eye on Andrew S. I have a good feeling about him.

Apparently Karl woke up the morning of the cocktail party and chose violence. There’s no other explanation for his truly suspect behavior.

There Katie was, enjoying an endless parade of men she needed to talk to before she could see Greg again, when Karl walked in and told her she can’t trust any of the dudes at all. She was like, “Give me specifics!” and he was like, “Oh, sorry, I can’t, because I’m making all of this up for attention.”

Katie completely spiraled because her biggest fear is falling for someone who isn’t there for the right reasons™. She yelled at the group and then asked Aaron for more info since he’s narced on Cody earlier. Obviously, Aaron had no idea what Karl was talking about because Karl was making it up as he went. Meanwhile, Karl fessed up to the group and now everyone hates him.

You’re telling me this man gets paid to motivate people with his words?

The episode ended in a cliffhanger, which means we’ll get to see Karl dig his hole a little deeper next week before we finally get a rose ceremony.

What did you think of this episode? Do you have any favorites? I’m firmly team Greg, but I swear if some TikTokker finds something on his social media to make me hate him I will riot. Let’s talk in the comments.

The Cool Table@thecool_table
1.0K Following 1.0K Followers
@jamiesrule @jamadoria @coolstorymere I know you know this, but I"ve had pixie cuts off and on since 1997 and m*n h… https://t.co/VsXyyN7PpC
2 hours ago
4
@LSULeslie @schizoreads I’ve legit never even heard of this
2 hours ago
@chels__ebooks Yes! Josh O’Connor supremacy! I watched this right after I got obsessed with The Durrells ❤️❤️❤️
2 hours ago
@maria_gb75 Keep him
2 hours ago
@baskinsuns AGREED. I love love loved that as a kid (and vowed to be able to do it so someone would love me)
2 hours ago
1
Archives
Entertainment, The Bachelor, TV

The Bachelorette is Back with Katie Thurston and Better Than Ever