It’s like the producers behind The Bachelorette woke up the day week three of Katie’s season started filming and thought, “You know what this show needs? More tears.” So they invited perennial Bachelor Nick Viall to rehash past trauma and regrets with the men simultaneously dating her.

Someone give this show an Emmy.

This week’s episode opened exactly where the last one ended. All of the men are still mad at Karl for telling Katie that some of the 22 remaining guys on a television show about finding love with a stranger in six weeks are not there for the Right Reasons™.

How dare he acknowledge a fact that anyone who has been paying attention for the past 17 seasons knows. 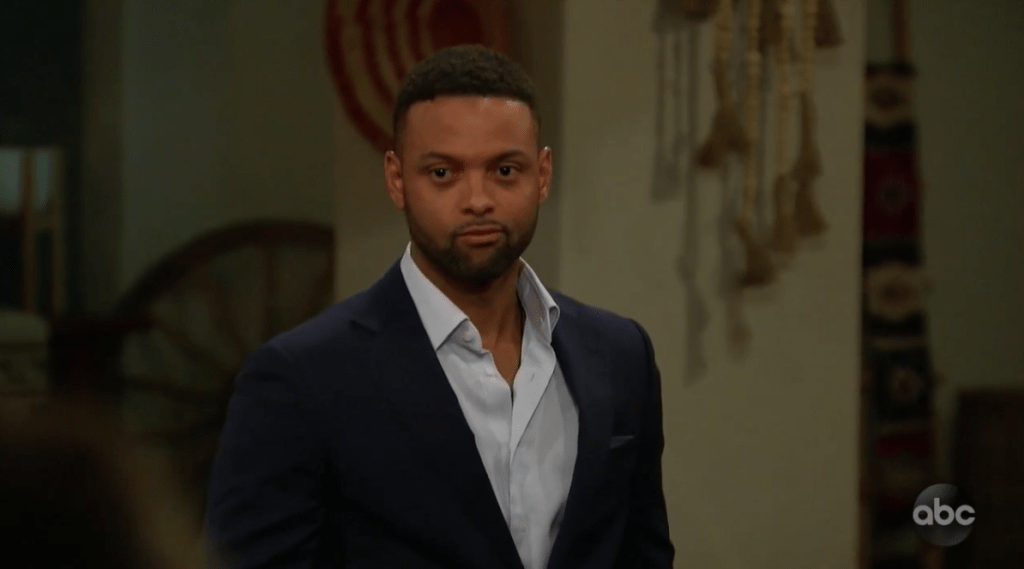 Katie stormed into the room and interrupted their group beratement of Karl to cancel the rest of the cocktail party. The guys reacted the way I imagine a hot yoga class goes. Everyone was sweating and yelling and looking for someone to blame for their personal life choices.

The rose ceremony started like usual with 22 men stacked on raisers like an elementary school choir performance. Then about halfway through, Mike the virgin interrupted Katie to tell her that the entire group of men had “come together in solidarity” to let her know that they all think Karl is a big fat liar.

She asked if they all agreed and some of them nodded while the rest widened their eyes as they watched their futures as podcasters being weighed in her hands. 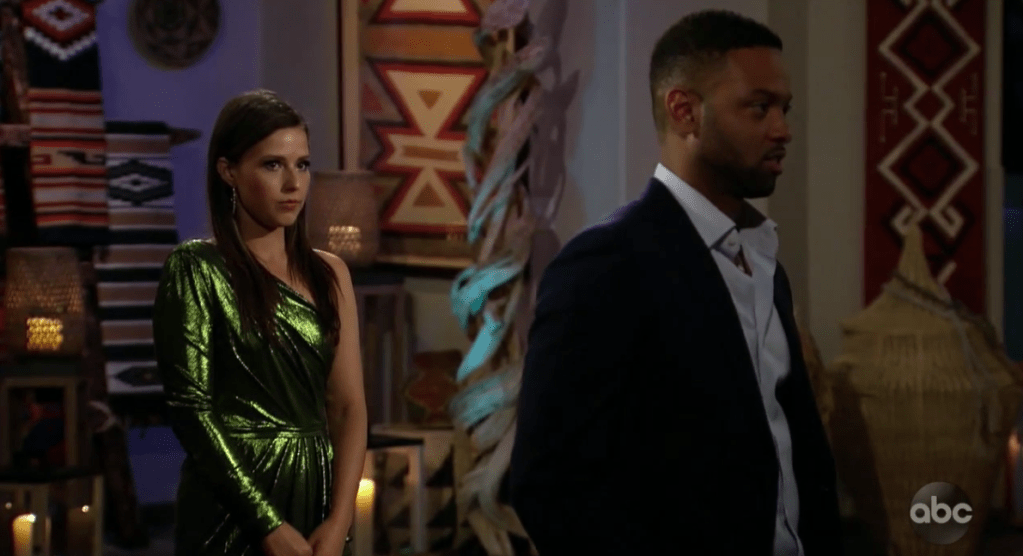 Sadly for Karl, he isn’t Greg so she sent him home. When it was time to say his goodbyes he stood on the edge of the room waiting for anyone to speak to him but when no one did he exited without saying a word. I didn’t even know he was capable of being that quiet.

That leaves 18 men in the hunt for Katie’s heart.

The next day, nine men were given a group date card that wasn’t signed with a heart from Katie. Aaron, Quartney, James, Connor B., David, Justin, Thomas, Hunter, Brendan took that as a serious sign. This is how you know the Stockholm Syndrome is working.

It turns out that they would be sitting in a circle surrounded by black walls spilling their deepest shame to Katie and… is that Nick Viall? Things are getting dire in New Mexico. 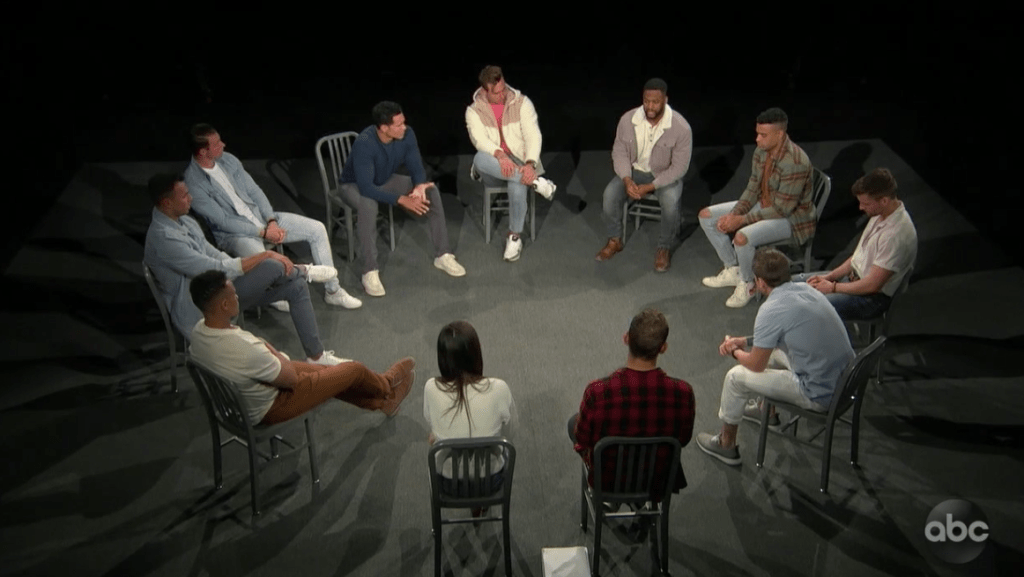 Nick sat with his legs crossed in cropped jeans and long white socks while he pierced the men with a gaze only perfected in acting class. But it worked. These dudes spilled it all.

Hunter (Fisher) screwed up his first marriage and broke up his family of four. Aaron took advantage of an ex. Basically, everyone cheated on someone at some point. Connor B. (the cat), dropped out of grad school, became a piano bar performer, used to get blackout angry drunk, and blew up his whole life before getting help. 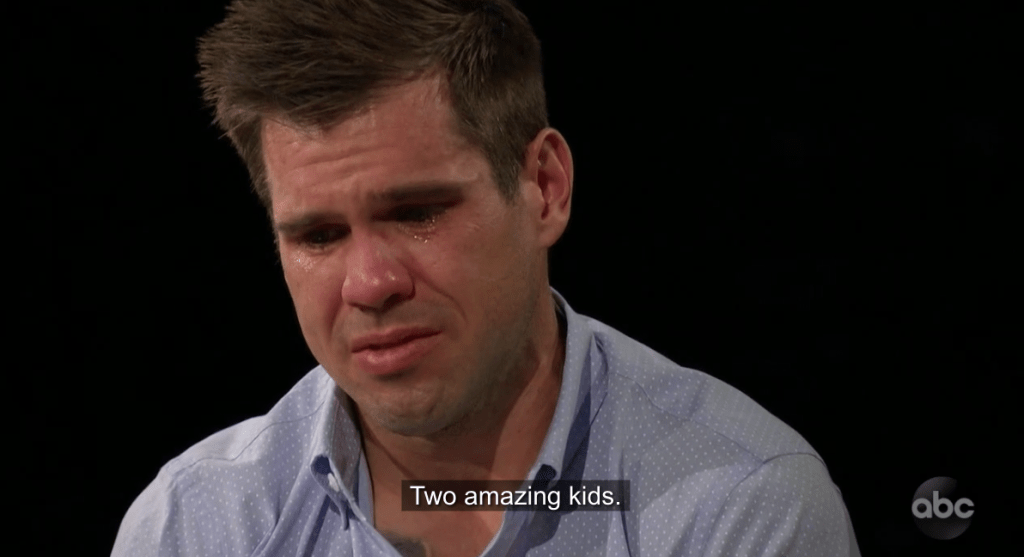 And then there was Thomas (Josh Murray lite) who spun every one of his negatives into a positive like he was trying to get Katie to join his MLM. He admitted that he came on the show for clout but now he’s in it for Katie. Then he offered to tell her all of his red flags without ever admitting that he had any.

Hey look, found one of those red flags, Thomas! 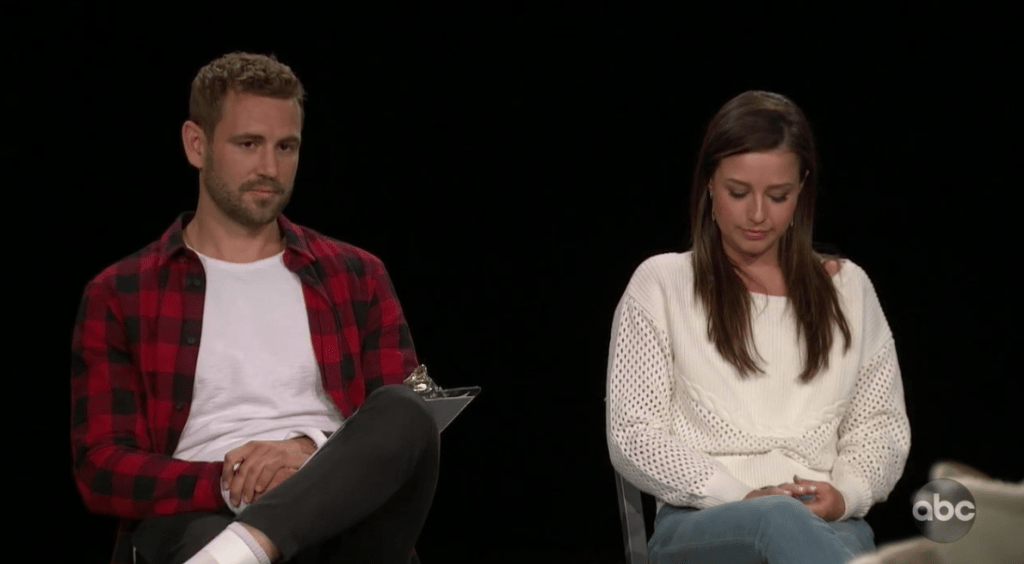 The most impactful part of this date, for me, was when Katie shared that she was sexually assaulted about 10 years ago. Despite her current reputation as a sex-positive queen, her assault resulted in an unhealthy relationship with sex. Eventually, she got the help she needed to be able to place blame where it belonged (her douchebag assaulter) but it still isn’t easy to discuss.

She emphasized that consent is non-negotiable. And I was clapping her on from my couch.

Drama at the After-Party

After a fun date spilling their deepest life regrets on national television, the men got to relax by fighting over time with one woman they kinda like at the after-party.

When Katie got the chance to talk to Thomas, she asked him to elucidate on his aforementioned red flags. Once again he avoided the question and instead talked about his deep feelings for her. He even went as far as to imply that he’s falling in love with her. 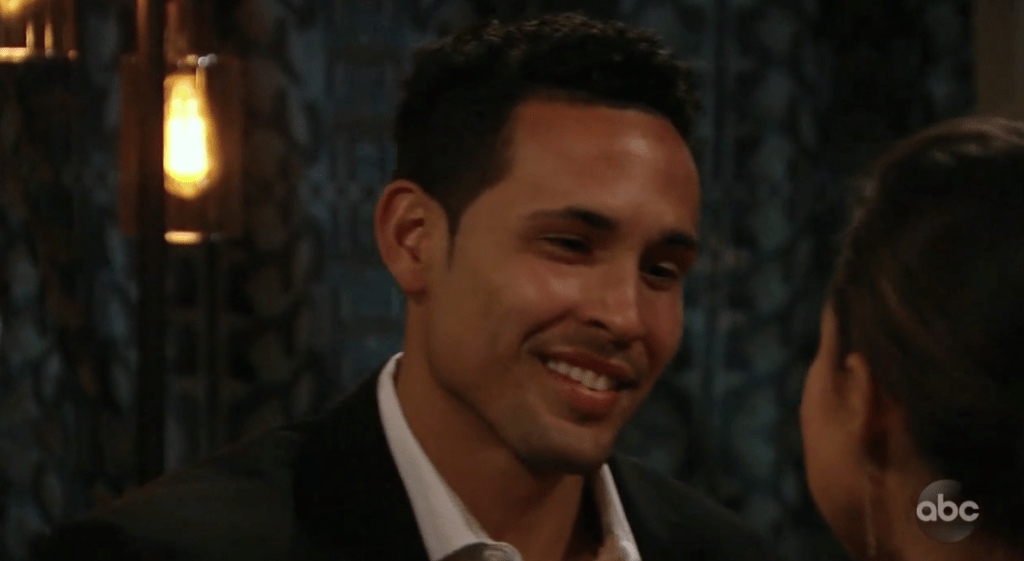 At first, Katie wasn’t buying it. But when Thomas interrupted her time with Aaron to emphasize his feelings she fell for it again. She said she felt instant chemistry with him, but he’s just super hot so she can’t trust that.

Meanwhile, Aaron was furious. I’m not saying he didn’t have a reason to be mad, but this is becoming a regular theme with this guy. First, he threw Cody under the bus, then he told her all about Karl, now he’s honed in on Thomas. Either he has Sherlock Holmes level of asshole-radar or he’s bored. Either way, no one likes a tattletale.

Stay in your lane, dude. 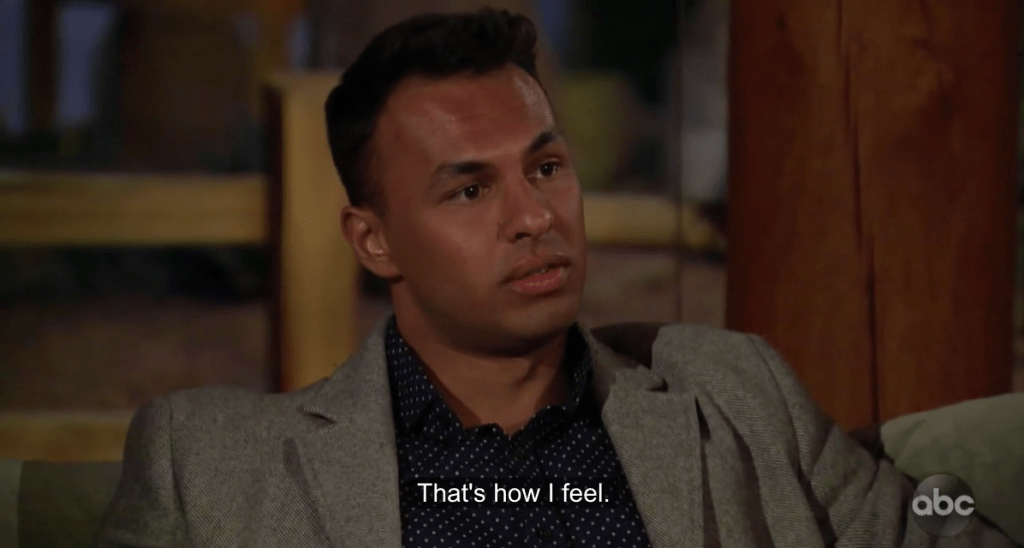 Connor B. the cat got the date rose. He’s such a nerd but I think I love him.

Michael A. Swoops in Out of Nowhere

When we first met Michael A. with the fake watch and single dad energy on night one, I thought he would be rose ceremony fodder. I was so wrong. At 36, Michael is definitely on the older end of a season that skews young for 30-year-old Katie. With that age comes experience. Like, a lot of experience.

Sure, he’s a good kisser, and yes they had surprisingly great chemistry on their dune buggy riding date, but he came guns blazing with his mature ability to be vulnerable. Step aside Nick Viall, Michael A. is where it’s at when it comes to making me cry this episode. 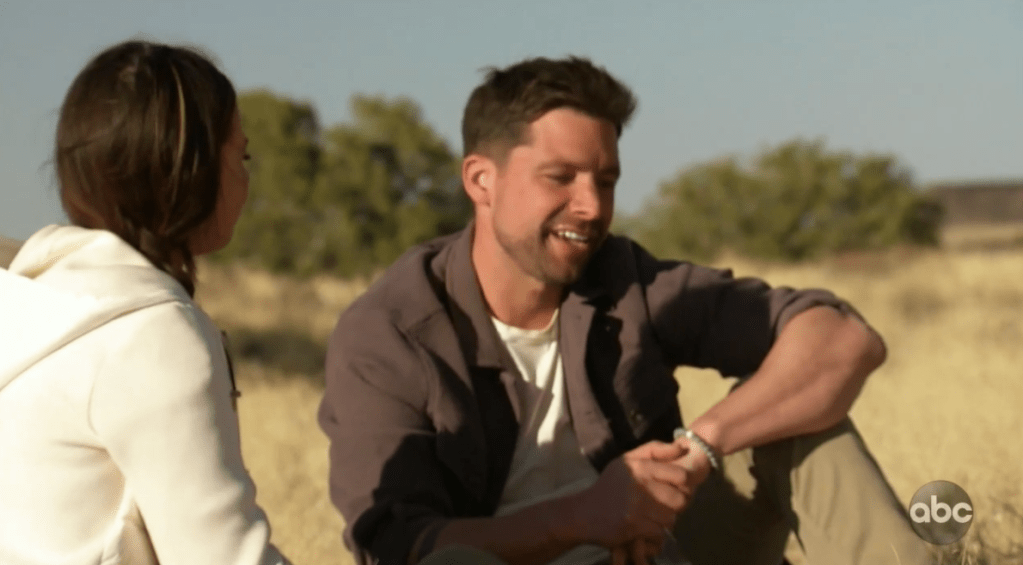 Michael met his wife Laura in college where they fell in love, eventually got married, and had a son. Seven months after their son was born she was diagnosed with breast cancer which she succumbed to in 2019. I KNOW.

It sounds like it would be depressing but Michael handled his story with such grace that it was a testament to his love for his wife and his hope of a future with Katie. He got the date rose and my devotion. I love this guy. If Katie doesn’t pick him (and she won’t) I’d love to see him as The Bachelor. 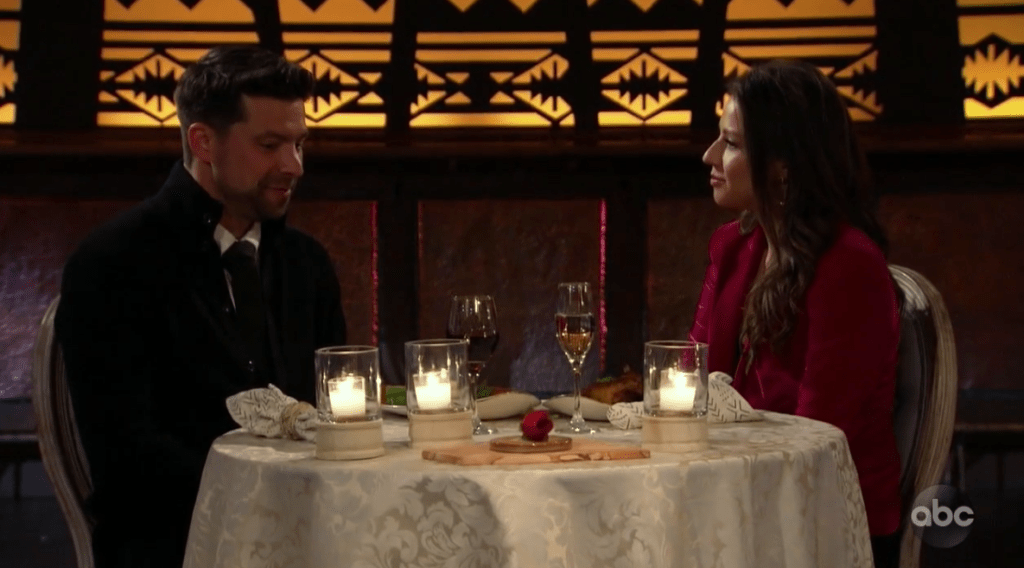 All I know is that after watching this date I told my husband that he has my permission to use a sad wife-is-dead backstory if he ends up on some elderly version of The Bachelorette someday. I can think of no better tribute. 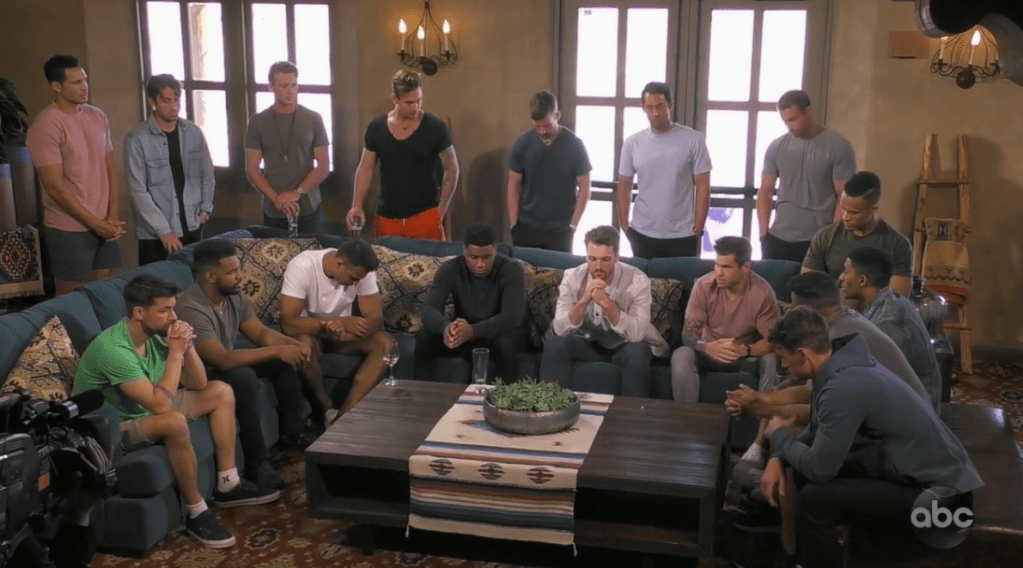 Who needs another group date when we can watch 17 men gang up on someone who signed up for the show for the exact same reason they did?

Yep, we’re all still mad at Thomas apparently, but now, for some reason, I still don’t understand, Hunter is in charge. Maybe Aaron needed a break?

All of the men gathered around while Hunter asked Thomas if he came on the show with the intention of being The Bachelor. Thomas (stupidly) said yes, but he no longer feels that way. Come on, Thomas, everyone knows the social contract of Bachelor Nation requires you to pretend you have no aspirations of any kind other than marrying Katie. 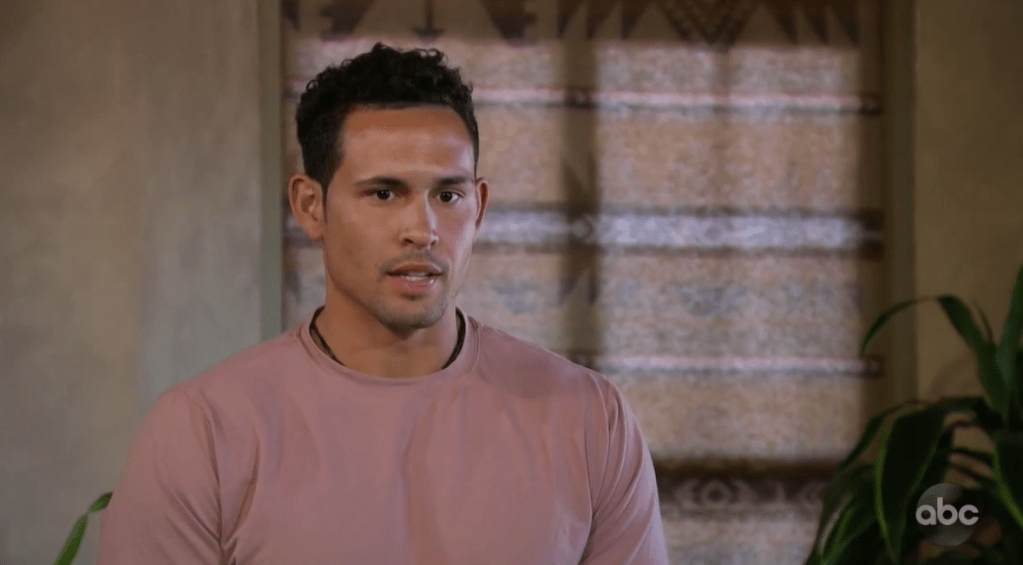 Like, I get it, they’re bored in a New Mexican Hyatt and Thomas probably sucks, but this is a waste of time.

The episode ended there, but fear not. Next week we’ll get the continuation of this episode. Oh and Blake Moynes is going to show up. I can hardly wait. What do you think of this season so far? Let’s talk in the comments.