Just like one of “queen” Victoria’s jokes, The Bachelor is back and more toxic than ever.

Let’s face the facts, this isn’t even Matt James’ season anymore. At this point, he could disappear to his suite with his Peloton never to be seen again, and no one would even miss him. The women of the cast have fully taken over. It’s like the Lord of Flies if the conch shell was replaced with increasingly horrific mean-girl behavior.

Perhaps that’s a by-product of production choices, or maybe Matt doesn’t have much of a personality. My money is on the latter.

All I’m saying is that if I wanted to watch a bunch of people argue in a hotel room, I would book a vacation with my family.

The Bachelor OG’s VS Newbies

When we last saw Matt and his plethora of petty prospects, he had just been informed by Katie that the whole group is high-key toxic. If you were fortunate enough to forget, the original cast, or the self-described “OG’s,” are furious that 5 new women joined the fray last episode. It got so bad that Anna spread a rumor that one of the new girls, Brittany is an escort. It was gross. 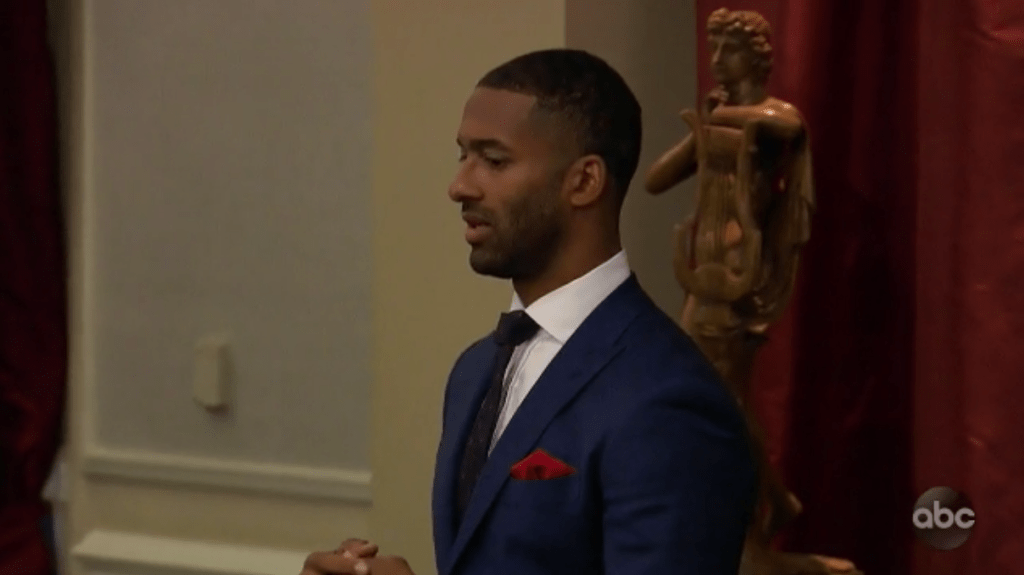 Thus, Matt entered the cocktail party the next night with a plan. Sure, it was a plan that was spoonfed to him, but he finally took a stand so, I’ll take it. He told the group that he’s not about bullying. In fact, his direct quote was, “If you’re having to belittle others to make yourself shine, then I’m not about that.” He’s basically Shakespeare. 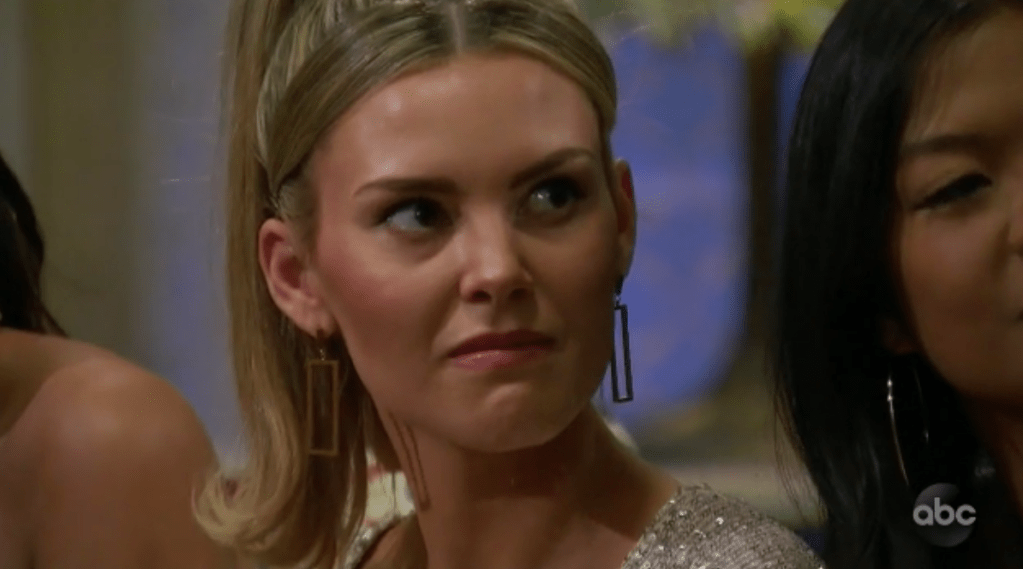 Smart girl because he sent her home in the middle of the cocktail party. She sobbed with a broken heart. Technically we’re all supposed to believe she was crying because she’s sad to leave Matt. But we all know she’s just mad that she’s not in the running to be the next Bachelorette.

Meanwhile, back in the Nemacolin Resort, queen Victoria was hustling to apologize to everyone she has ever offended. Since she routinely calls the other women hoes, whores, trash, and stupid, it should take a while.

Unfortunately, her rehabilitation campaign is too little too late, because now the floodgates are open and all the women are crying to Matt about the bullying they’ve endured at her hand. Matt pulled her aside to tell her everything he was hearing and she flipped. 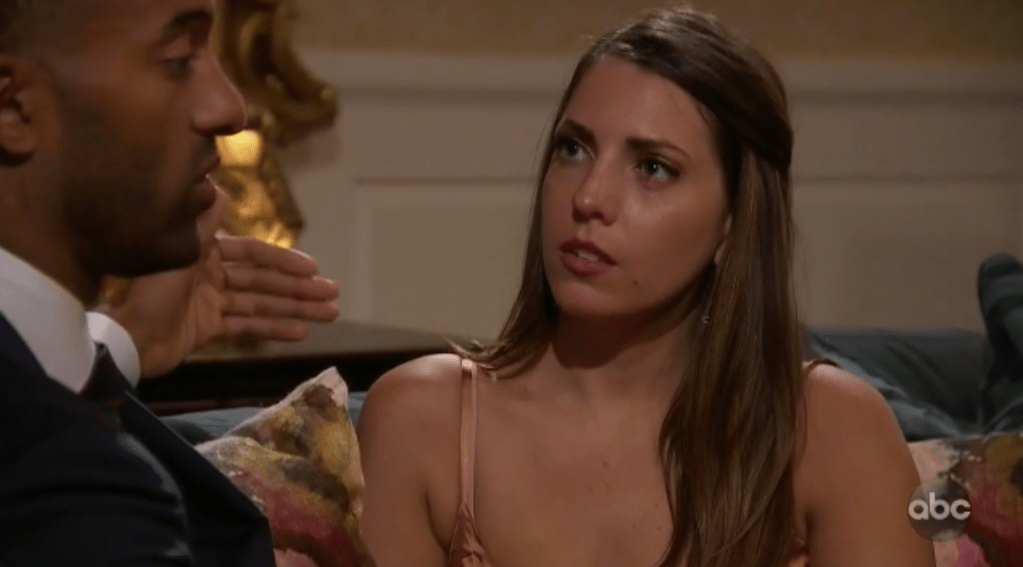 On the one hand, she was crying that she’s the best person in the house and she only says things from a place of humor. On the other hand, she called Katie a loser, Ryan a shady bitch, and exclaimed that she’s, “the only one with a working brain in this room.” She sobbed in every corner of the resort with her ubiquitous bra hanging out once again.

The writing was on the wall written in permanent marker and sealed over with plexiglass. Victoria did not get a rose. Finally. The other discarded women (Catalina, Lauren, and Mari) hugged Matt, said their good-byes, and left with dignity. Not Victoria. Consistent until the end, she stormed up to him and said, “I honestly feel so sorry for you that you would listen to hearsay and not all of the facts in a situation.”

See you in Paradise, Victoria.

Rachael Gets The Bachelor’s Best Date

Every season of The Bachelor there’s one lucky woman who gets the shopping spree date. This season it went to super gorgeous, 24-year-old graphic designer, Rachael. 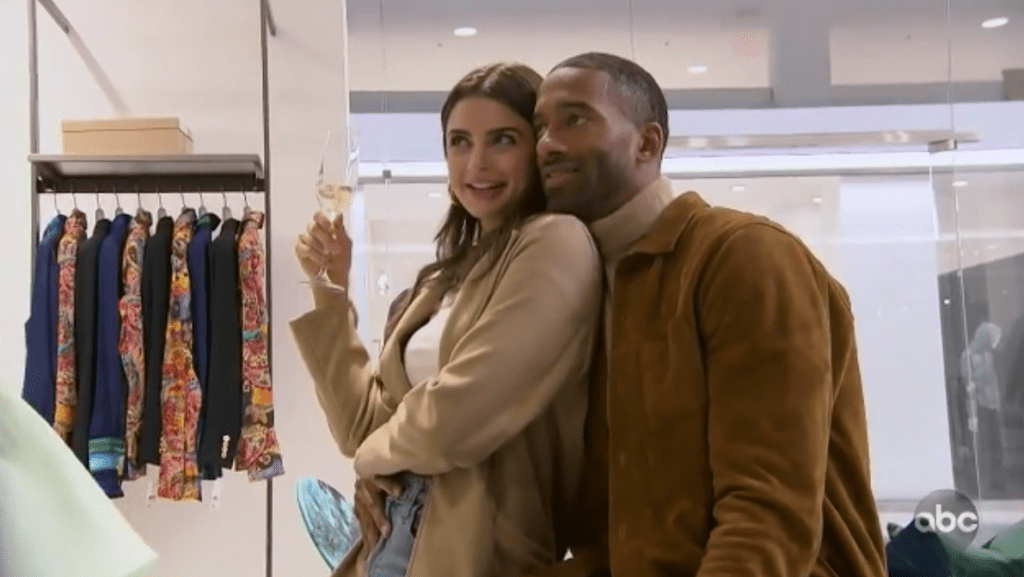 Hi, yes, I’ve seen your DMs, comments, and messages about the viral TikTok regarding Rachael’s alleged racist behavior. Is it true? I have no idea. Is it possible? Certainly. Would I be surprised? No. Am I prepared to make a definitive decision about her as a person based on TikTok hearsay? Not yet. If a legitimate news source has something to say about it, I’m all ears.

Okay, so, her date modeling outfits for Matt was just a vehicle for her to stroll back into the resort with her arms full of shopping bags and her feet covered in free Louboutins. Jealousy is the best spice. 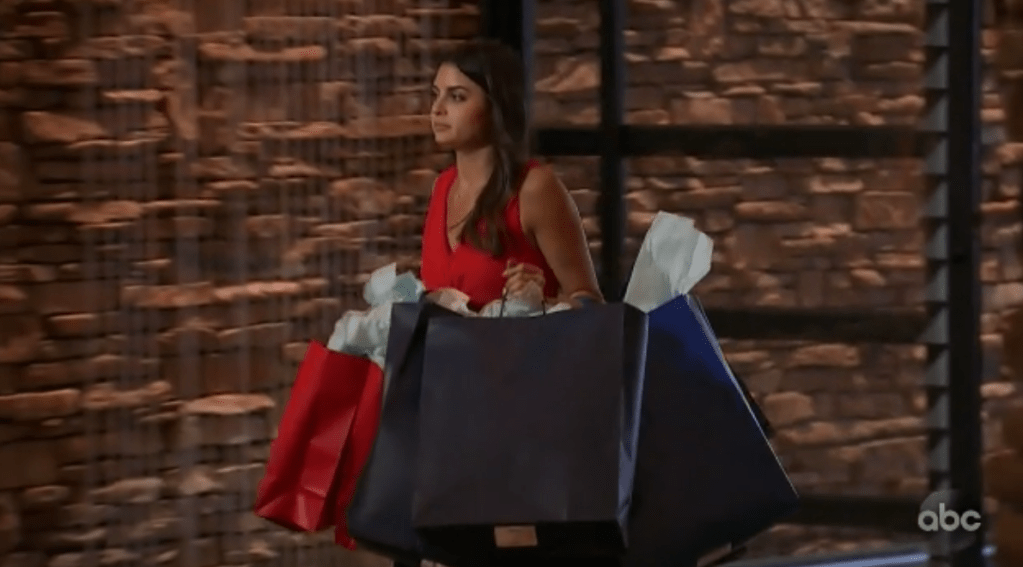 At dinner that night, Rachael and Matt had great chemistry but zero substance. I have no idea what they like about each other, other than their symmetrical faces, but somehow they both felt strong enough to admit that they’re falling in love.

Oh no, the first black Bachelor is about to end up with an accused racist, isn’t he?

Now that Victoria and Anna are gone, the group dates are pretty boring. I’m not saying I miss their toxicity, but I am saying that I wouldn’t mind seeing Victoria digging for nuts in a squirrel costume again. Instead, we got Serena P., Bri, Katie, Pieper, Serena C., Ryan, Michelle, Brittany, Magi, Abigail, Chelsea, Jessenia, and MJ visiting a farm. 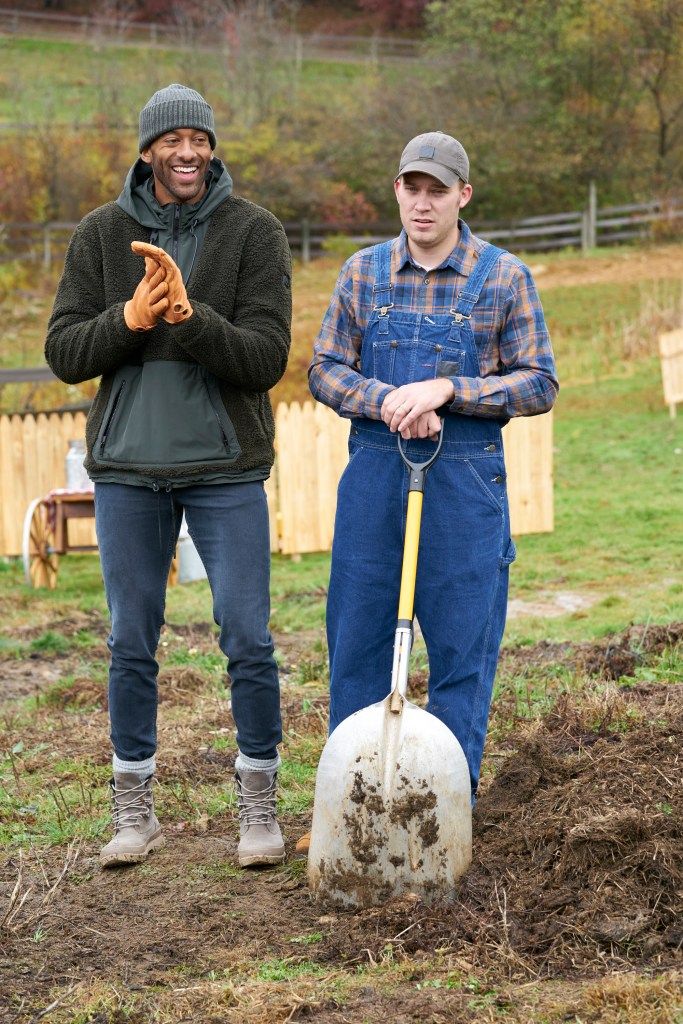 There was a cute moment when a farmer compared working on a farm to being in love because, “a farm takes patience, hard work, and you have to deal with shit.” Other than that, Matt threw some eggs and made out with Pieper when he didn’t think anyone was looking.

Afterparties on The Bachelor Are the Worst

They should really start calling the evening portion of group dates something other than an “afterparty,” because parties are supposed to be fun.

Instead, MJ (23, Hairstylist) found out from Matt that her name had come up in relation to the toxicity in the group. She was immediately super angry and reacted…toxically. Shocking! Jessenia (27, Social Media Marketer) calmly and confidently admitted that she is the one who brought up her name to Matt which set MJ off. One of these days these women will react maturely, but today is not that day. 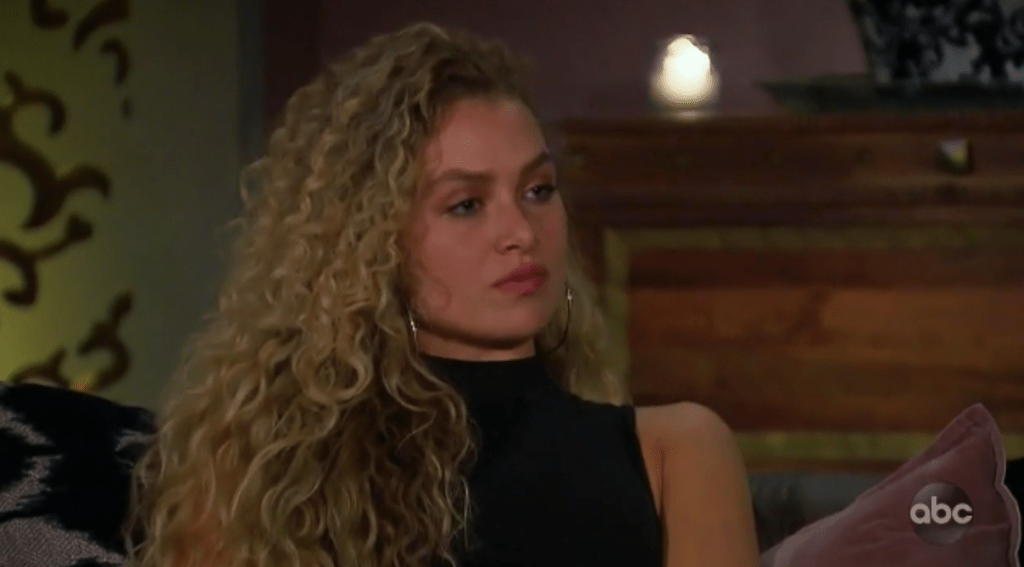 While MJ was claiming victimhood, Chelsea and Michelle were getting reassurances that they still have strong connections with Matt. However, Abigail got the date rose after being vulnerable with Matt about her fear of rejection due to her being deaf. Score one for the good guys.

Kit gets the date

The last one-on-one date of the night went to 21-year-old fashion entrepreneur, Kit. When Kit realized that her date with Matt would be baking cookies in his suite, she started bawling. Surprisingly, not from disappointment. Instead she said that it proved he has been paying attention to her since her happy place is in the kitchen with her mom.

I mean, Rachael got Louboutins but I guess when your mom is fashion icon Cynthia Rowley, baking is more impressive. Or something. 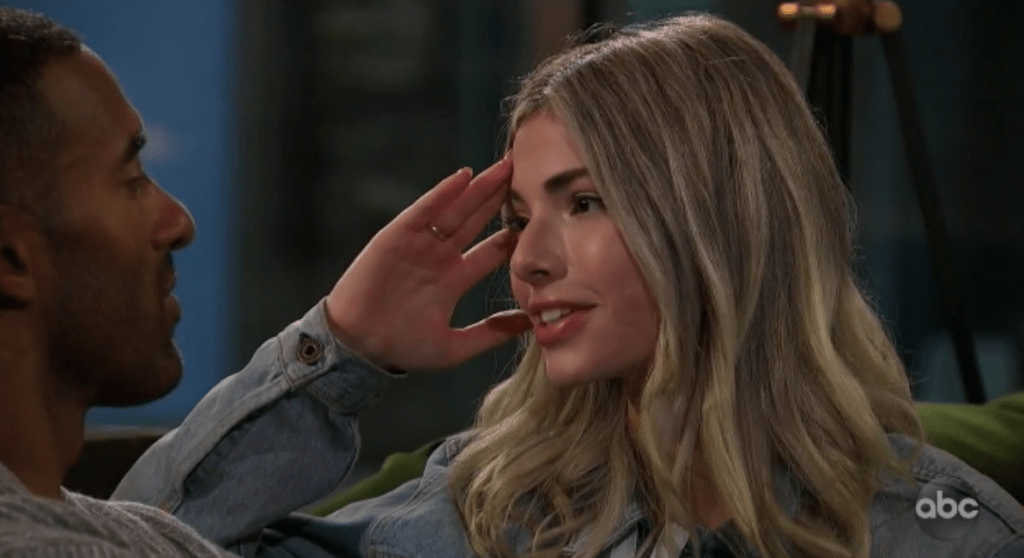 Kit is super young, but her life experience makes her seem much older. I didn’t want to like her, but I do. I really do. Matt likes her too, so she got the date rose and made-out with Matt on the couch.

Have a mentioned recently how bad of a kisser Matt is? Not only does he keep his eyes open, but his mouth moves in this super weird way that makes me uncomfortable. What a season.

More Girl Fights on The Bachelor

It was almost time for the rose ceremony (I know, ANOTHER one), but first Matt sent a note asking to speak with MJ and Jessenia privately. You know, because we definitely need to stir that pot some more.

MJ told the audience to grab some popcorn and her advice was good. Not because the drama was entertaining, but because I really needed something to throw at the screen. 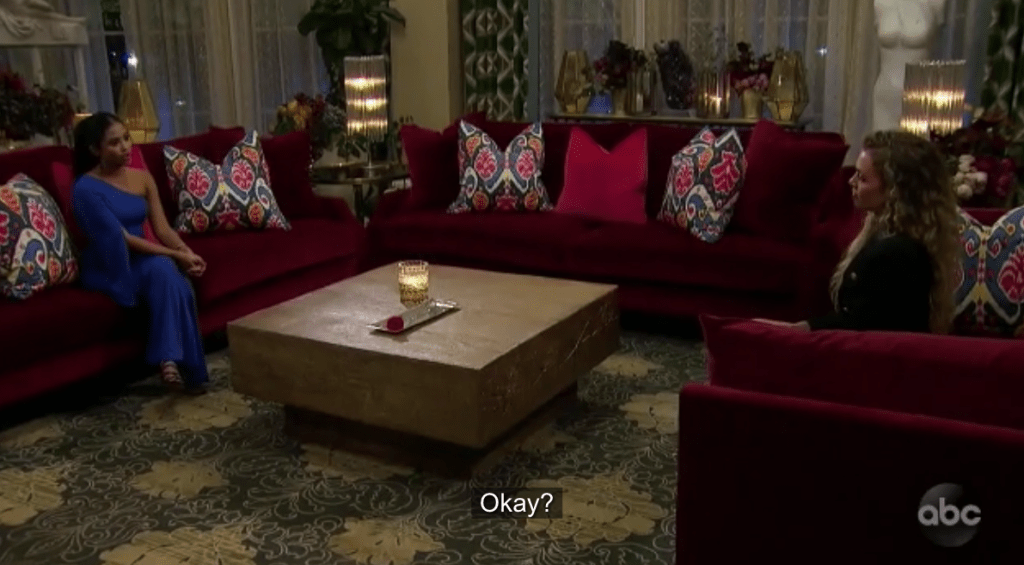 Between MJ yelling that she, “preaches harmony,” and Jessenia emphatic in her position, this conversation went nowhere fast. I am so tired of watching women scream at each other on couches. Can’t they yell at Matt about his inability to form a coherent sentence instead?

Matt walked into the tension-filled room and then the episode ended. Thank god, I need a break.

We’re going to have to wait a while for the break because the scenes from next week show past Bachelor cast member, never-been-kissed Heather Martin crashing the gates. Girl, you are in danger, turn that car around. Also, Tyler Cameron will finally show up on the season. Finally. Please, Tyler, entertain us. You’re our only hope.

The Cool Table@thecool_table
1.0K Following 1.0K Followers
@jamiesrule @jamadoria @coolstorymere I know you know this, but I"ve had pixie cuts off and on since 1997 and m*n h… https://t.co/VsXyyN7PpC
2 hours ago
4
@LSULeslie @schizoreads I’ve legit never even heard of this
1 hour ago
@chels__ebooks Yes! Josh O’Connor supremacy! I watched this right after I got obsessed with The Durrells ❤️❤️❤️
1 hour ago
@maria_gb75 Keep him
1 hour ago
@baskinsuns AGREED. I love love loved that as a kid (and vowed to be able to do it so someone would love me)
1 hour ago
1
Archives
Book Club, Book List, book review, Books, Romance

All the New Romance Books You Need to Read This Winter