One day Matt James was making videos with Tyler Cameron and Hannah Brown instead of responsibly quarantining and the next he was on The Bachelor with 18 girlfriends and a wardrobe full of turtlenecks. Maybe next time he’ll try switching his account to private. Just a thought.

Fortunately for us, he really wanted that ad revenue and it’s now week four of his journey to find love on national television for our entertainment.

And my parents used to say the internet was bad for you.

Now, Where Were We?

Since Sarah’s dramatic exit took for-ev-er, the second group date that was supposed to air last week was turned into a janky evening date this week. I demand a refund.

All of the women on this group date wanted to know how Matt was handling the drama which made him feel special and seen. Whatever it takes Matt, but they’re also just really bored without TV or books and need more gossip.

In the end, the group date was a bust, with the exception of Chelsea (28, Runway Model, NYC)who shared a moving story of her decision to shave her head after a lifetime of adhering to white beauty standards. In classic Matt James fashion, he had no idea how to respond so he handed her the group date rose and called it a night.

Victoria is Still Doing the Most

“Queen” Victoria sucks. I know it, you know it, the producers definitely know it. It’s fine.

It’s also highly amusing to me. I really don’t care what that says about me.

So, when Victoria demanded that Katie (our sex-positive/feminist goddess) apologize to her, I was here for it. Why did she want an apology? Oh, because Katie told her not to call other women trash. That’s right, Victoria wanted Katie to apologize to her for telling her not to call other women trash. It’s so bad that it’s good. Katie has big “future Bachelorette” vibes and, thus, was not intimidated and no apology was given.

Fresh Meat at The Rose Ceremony

Don’t worry, Victoria was not done with her ridiculously overwrought aggressive ways for the night.

I realize she’s a lot, but imagine watching this season after she’s gone. It’ll just be a bunch of women pretending to think Matt James isn’t super boring. Appreciate the entertainment while we have her.

Victoria was feeling cocky going into the Rose Ceremony in her sparkly blue Elsa dress with her Frozen jokes about letting the other women go. Then Chris Harrison sent Matt James down to the red carpet entrance where five new women joined the cast. 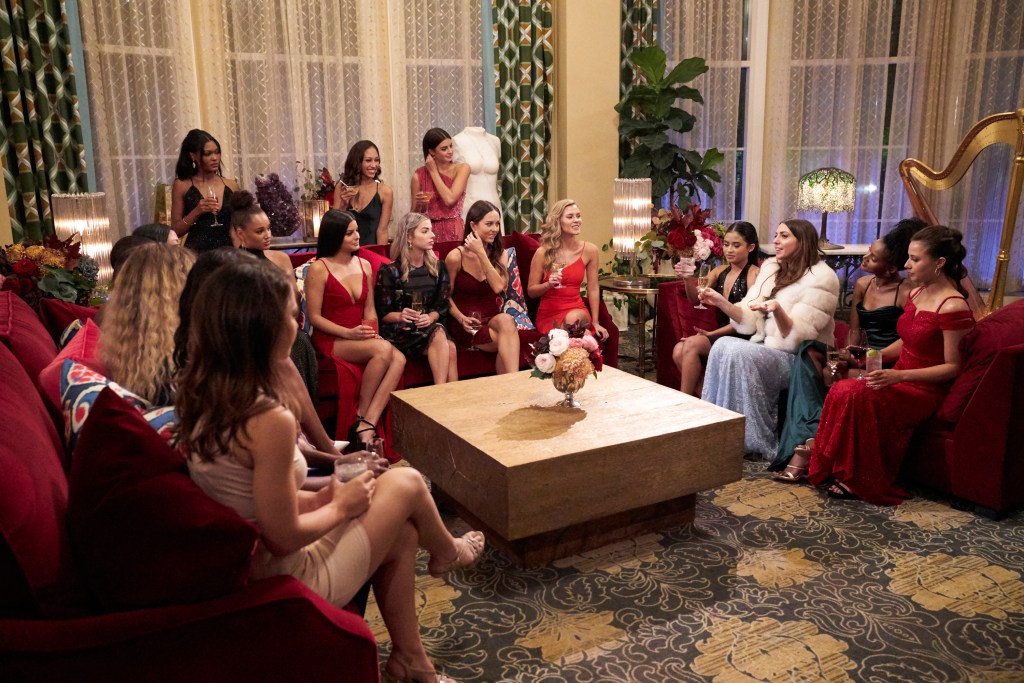 If you thought Victoria was bad before that, wait until she was calling the newbies “slore” and “random-ass hoes” while ripping the crown off of one of their heads. She’s completely out of control. It’s horrifying and wonderful.

By the time Matt stood in front of the (now) 23 women, tensions were sky-high. Would Matt keep any of the new women? DUH, he’s a dude and they’re fresh meat. In the end, one newbie went home and two original cast women left (Khayla and Kaili) which means…you guessed it…Victoria lives to see another rose.

Time for a Guest Star

There are now 20 women left in the season which is somehow more than we started the night with. Rude.

But wait, here comes previous Bachelor/Peter Brady lookalike Ben Higgins to help host Matt’s next group date. Mari, Bri, Abigail, Brittany (new girl), Ryan (new girl), Catalina (new girl), Magi, Anna, and Victoria competed in an obstacle course. This was one of those funny dates that are filmed purely for the chance to see someone like Magi try to row a 1,000-pound pumpkin across a lake. They wore squirrel costumes, dug for acorns, and generally looked stupid. My kind of kink.

That night, Anna (24, Copywriter, Chicago, kinda looks like Hannah Brown) was freaking out because she hasn’t spent very much time with Matt. Oh, and she also recognizes one of the new girls, Brittany, because a bunch of people back home in Chicago told her that she might be a professional escort. Which she proceeded to tell everyone who would listen including all of America, Canada, and part of Australia watching the show. It’s not a good look.

For her part, Brittany denied the accusation with a sense of disbelief. She said that she’s had a boyfriend for most of her life, and that being attacked by strangers is really difficult for her. To which Victoria replied, “Okay, then get out the house.”

Bri got the date rose, but it barely even registered over everything else.

The one-on-one date of the night went to one of the new women to join the group. You know, because they weren’t already hated enough.

Michelle is a 27 year-old teacher from Minnesota who has the biceps of Michelle Obama and really great chemistry with Matt. They went on a fun scavenger hunt that started with ziplining and ended with a makeout session in a hot air balloon. Classic Bachelor stuff, finally.

At their dinner date that evening, Michelle and Matt sat in a classic car showroom and discussed their shared passion for children. She spoke at length about the challenges of teaching during covid and the George Floyd protests. Matt told her that he didn’t want to freak her out, but she has everything he’s looking for in a woman. He gave her the date rose and gave me hope that this could work out for him in the end.

The last group date of the week was a boxing match with, like, actual gloves and real fighting. Sure, quarantine these women in Pennsylvania with no phones, no internet, no TV, no books, one man, and one Victoria and then make them hit each other. What could possibly go wrong?

A lot. A lot could go wrong. 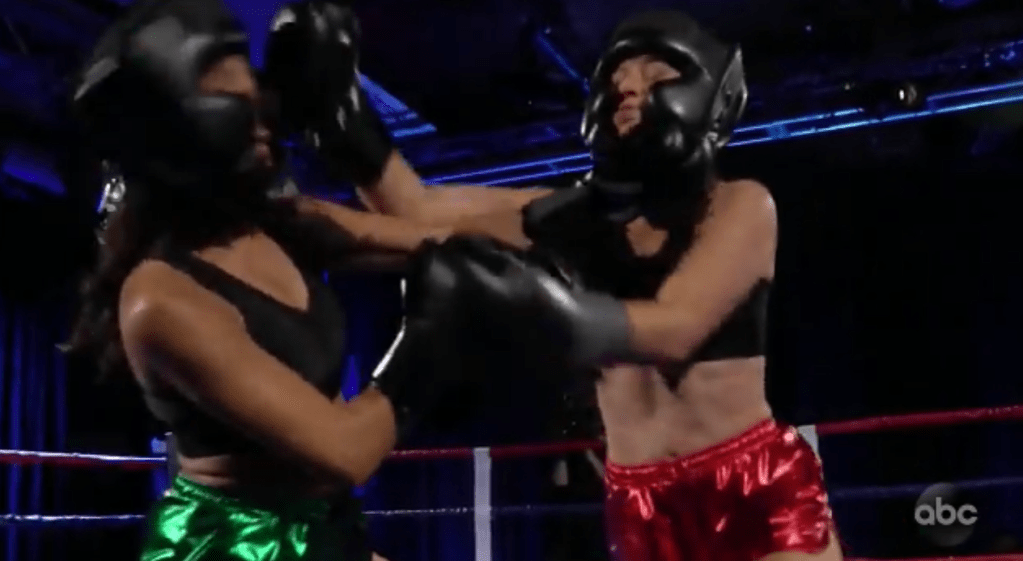 Katie, Pieper, Serena P., Rachael, Kit, Chelsea, Jessenia, Lauren, Serena C. and MJ took turns kicking the living shit out of one another in a boxing ring. It was rough. Then they went to the after-party portion of the date and kept the fight going.

The OG cast of women HATE the new cast and they’re not being funny about it. I get being bored and feeling threatened by newbies, but this was intense. Every single one of them was being mean-girl to the max except for Katie. She kept telling the other women that they’d have to welcome the new girls and stop being mean, but the rest of the women just laughed it off. 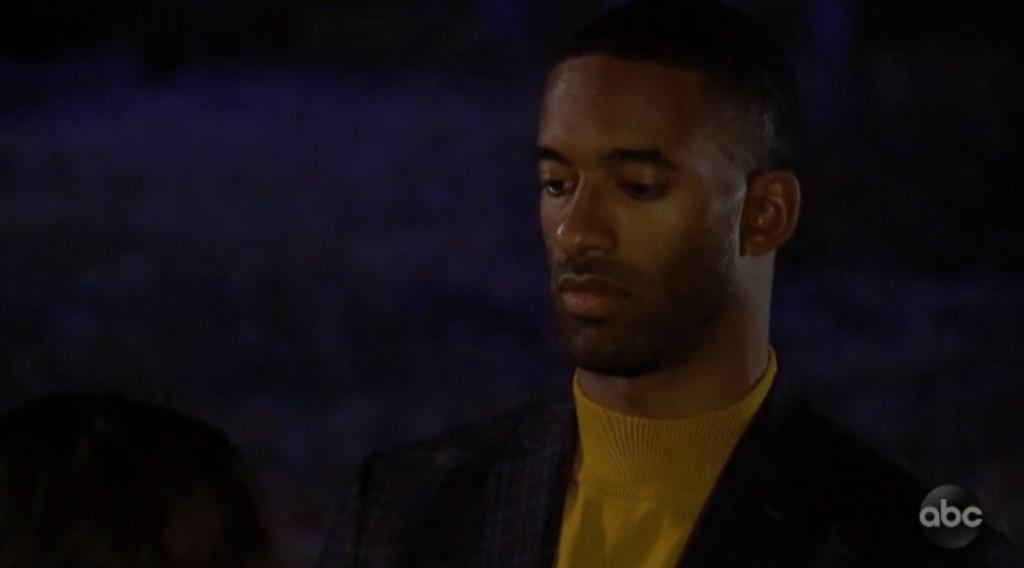 So Katie walked outside and tattle-taled to Matt.

On the one hand, tattletaling to the lead is my biggest pet peeve on this show. On the other, the rumors about Brittany being an escort could do real damage to her life. Either way, Matt was upset with the news that anyone would try to “bully their way to (his) heart.”

So close, Matt, so close.

The episode ended there, but the trailer showed Anna from Chicago and Victoria continuing to be straight up Disney Villains so, don’t expect the drama to end with it.

What do you think of the season? Is Matt James a good Bachelor? Is there any chance of this drama ending soon? Let’s Talk in the comments.

The Cool Table@thecool_table
1.0K Following 1.0K Followers
@jamiesrule @jamadoria @coolstorymere I know you know this, but I"ve had pixie cuts off and on since 1997 and m*n h… https://t.co/VsXyyN7PpC
2 hours ago
4
@LSULeslie @schizoreads I’ve legit never even heard of this
1 hour ago
@chels__ebooks Yes! Josh O’Connor supremacy! I watched this right after I got obsessed with The Durrells ❤️❤️❤️
1 hour ago
@maria_gb75 Keep him
1 hour ago
@baskinsuns AGREED. I love love loved that as a kid (and vowed to be able to do it so someone would love me)
1 hour ago
1
Archives
Uncategorized

A Discovery of Witches, Season 2, Episode 3: A Hangout of Witches