The Bachelor is back with week three of Matt James’s journey to find love. When we last saw Matt and his coterie of quarantined cuties, 23 of them were waiting patiently for a rose of validation at the rose ceremony, and one was passed out behind a couch.

Discount queen Victoria is wrong, this exactly like a sorority after all.

This week, Matt’s girlfriends wrote dirty love scenes with Ashley Iaconetti, got jealous of Matt’s attention, and made him cry.

True love is just around the corner – I can feel it. 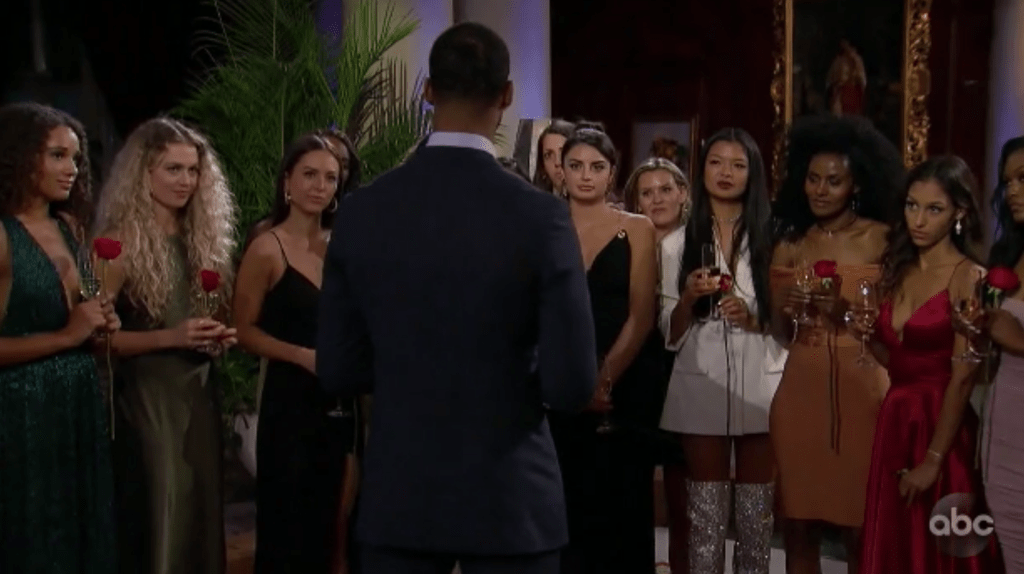 Alexis Rose lookalike/G-Eazy’s ex, Sarah fainted and ruined our chance of getting a rose ceremony at the end of the episode last week. I will never forgive her. Obviously, she was fine, but that didn’t stop Matt from taking her outside for long reassuring hugs that the other women could see through a window. Wait, is that…yep, that’s a target on Sarah’s back.

Matt sent a handful of women home, but most significantly, he kept discount queen Victoria and sent Marylynn packing because Victoria hated her. I’m starting to question his decision-making skills.

The next morning, Chris Harrison arrived to tell the remaining women that Matt is ready to be pushed out of his comfort zone.  Clearly, the only solution to this conundrum is to put daddy Chris himself in charge of planning the dates this week. I’ve read this book.

No, I’ve literally read this book.

That’s right, Chris Harrison has written a romance novel and royalties don’t pay themselves. So, naturally, his idea of a group date is making ten of the women write and perform Matt-inspired erotica. Ashley Iaconetti made a guest appearance, but the real star of this date was watching Chris giggle as the women said things about Matt’s, “long…thick…legs.” 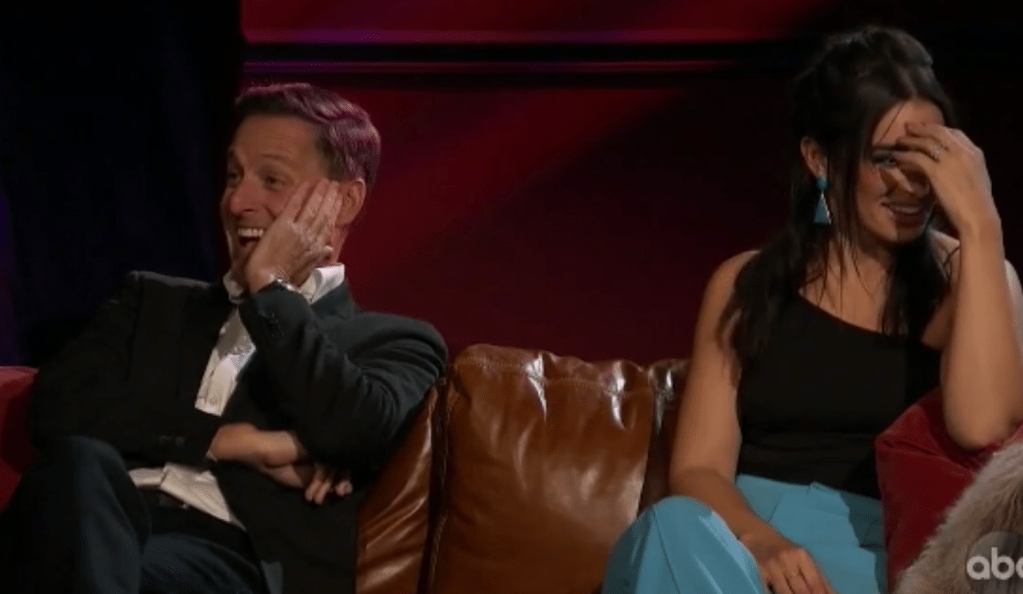 In the end, the real winner was Chris’s bank account. If I were judging, Katie and Victoria made everyone laugh the hardest with stories that were nearly all blurred and beeped out. Alas, this is Bachelor Matt and he’s a bit of a prude, so Rachael (who got the date rose) and Bri impressed him the most with their coy restraint.

That night, Sarah (the fainting goat from the rose ceremony) crashed the after-party. She was feeling sad and insecure because she had a great one-on-one date with Matt last week and now thinks she owns him. She figured, “Hey, the Nemacolin Resort isn’t that big, I’ll just walk over there and talk to Matt and reassure myself that he likes me most.” Well, if the other women liked you before, they sure don’t now, Sarah.

Except for bachelor Matt. Matt still likes her, like really likes her. He’s also kinda stupid at the whole Bachelor thing; so, he gave Sarah some of the other women’s time to reassure her with his lips. Since time with Matt is the only currency these women have, they were furious. 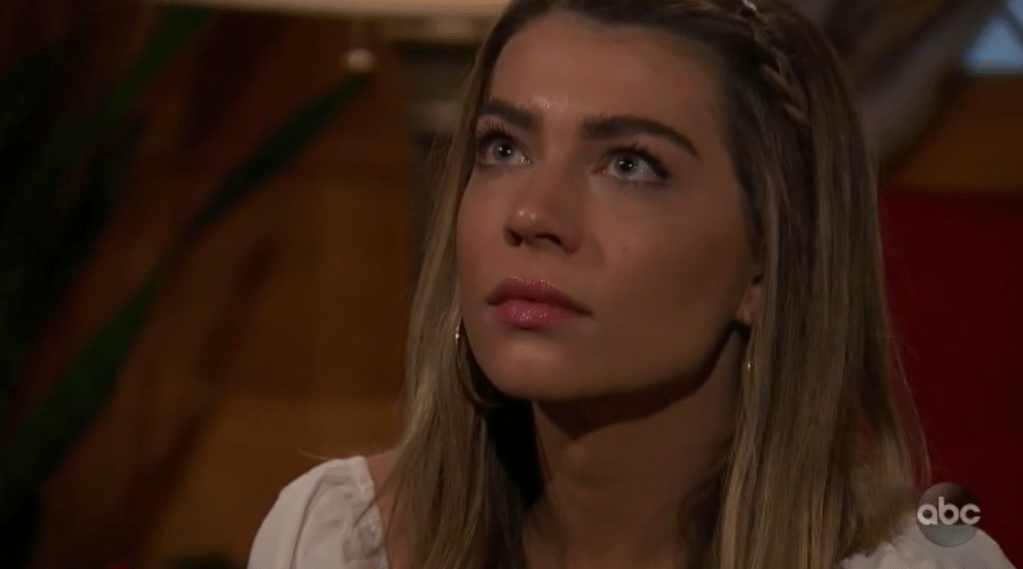 She tried to smooth things over with the women on the date, but they weren’t having it. So she ran back to her room crying and then didn’t show up to the requisite group hang before Serena P.’s one-on-one date the next morning. Obviously, Matt noticed that she was missing, and obviously, he ran off to her room to comfort her with his lips again. She cried and told him that she was considering going home, but Matt reassured her of his feelings and begged her to stay.

Someone better check the other women for weapons if Sarah ever decides to join the rest of them again.

Serena P. Gets A One-On-One 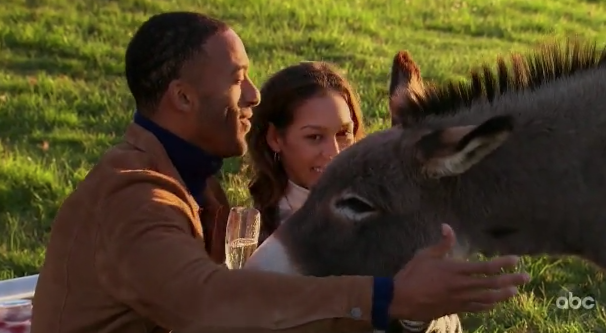 Despite all of Sarah’s best efforts, the only official one-on-one date of the week went to Serena P. (not to be confused with Serena C.). Matt and the 22-year-old publicist from Toronto spent the day picnicking in a field while donkeys assaulted them. Then they went to dinner where Serena P. told him that she’s “falling in like” with him. That’s not actually a thing, but I get it, Stockholm Syndrome is hard. She got the date rose, but I still know nothing about her other than that she looks pretty while avoiding getting trampled by farm animals.

It could be worse.

Everyone is Still Mad at Sarah

Meanwhile, back at the resort, no one has seen Sarah at all since she crashed the after-party. She’s been hiding in her suite because she’s not an idiot who wants to be murdered by a bunch of bored aspiring FabFitFun partners. Good plan, Sarah, because they spent the whole day talking smack about you and planning your demise.

Then, just as the other women gathered to open the next date card, she tried to sneak her way in without being noticed but the rest of them were like, “NOPE.” 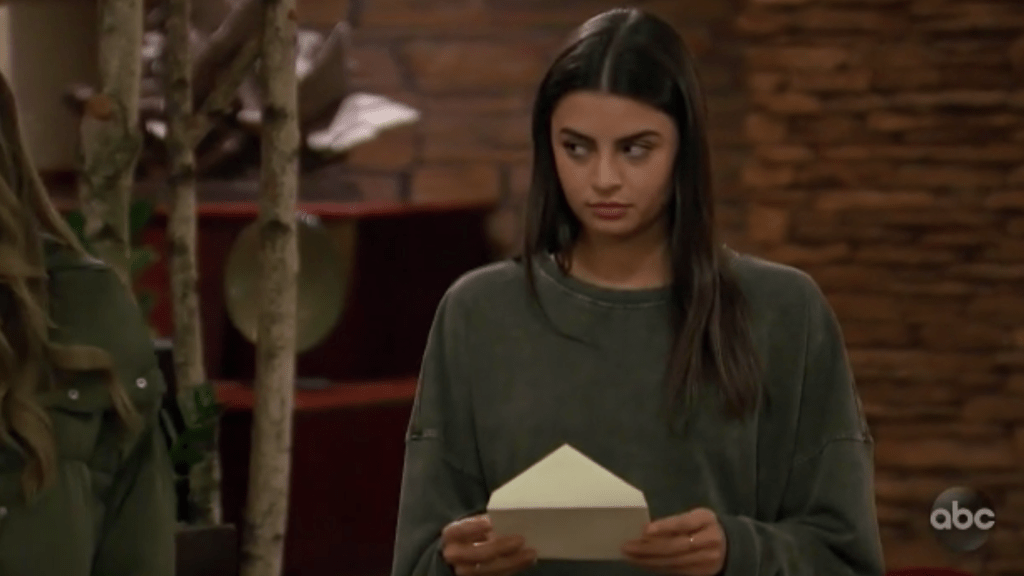 After that, it was like a bunch of sugar-free kids with bats at a birthday party and Sarah was the piñata.

They came at her fast and they came at her hard. It was simultaneously hard to watch and immensely amusing. By the end of their attacks, she ran back into hiding in her suite. On the one hand, self-preservation is important. But on the other, you can’t show a sign of weakness to a mob like that. She’s never going to recover.

Later, Katie started feeling guilty about the way they attacked Sarah, so she breached her cloister. This gave Sarah the chance to admit that, yes, the process is difficult for her, but she’s also really missing her dad who is terminally ill with ALS. Katie shared that she has also lost her father and regrets that she never got to say good-bye. By the end of the conversation, they were both tear-streaked and Sarah was determined to leave the show. 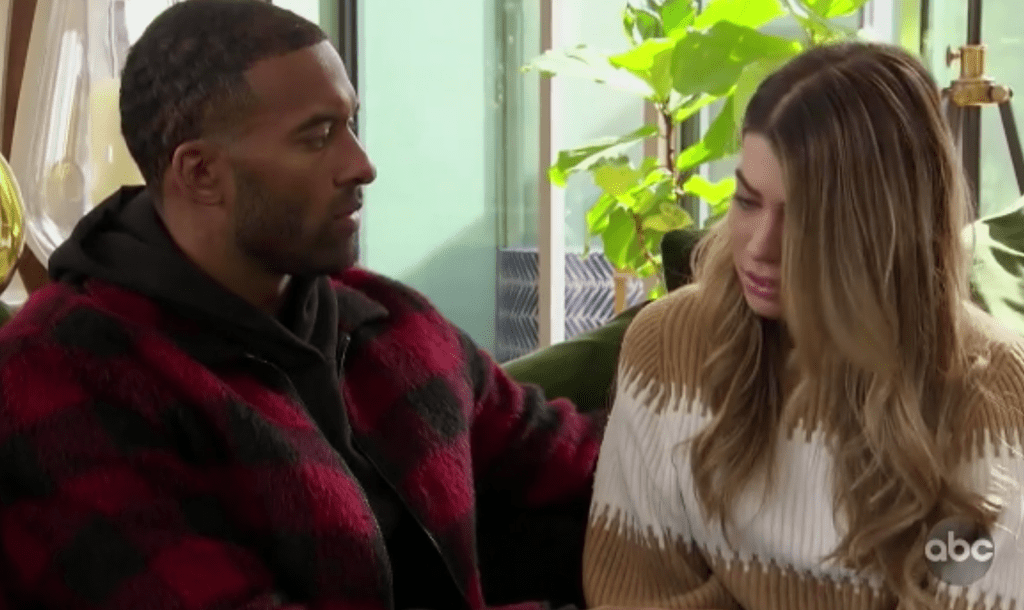 She packed her things, went to Matt’s suite, and told him that she was choosing to go home. He asked her to reconsider, but she was resolute. He solemnly told her that he’ll never forget her and that he’ll be praying for her dad. Then she sobbed in the SUV of shame that this was the hardest decision she’s ever had to make. Like, ever? I feel like leaving your terminally ill dad to go on a TV show might have been harder; but, what do I know?

The episode ended with Bachelor Matt staring forlornly out a window. Maybe he’ll get the hang of this whole bachelor thing after all.

Next week The Bachelor will be back with a whole new episode and…5 new women? Discount queen Victoria is going to hate this. Do you think Sarah is gone for good? Will Matt wear another turtleneck? Will he ever close his eyes while he kisses? Let’s talk in the comments.

The Cool Table@thecool_table
1.0K Following 1.0K Followers
@jamiesrule @jamadoria @coolstorymere I know you know this, but I"ve had pixie cuts off and on since 1997 and m*n h… https://t.co/VsXyyN7PpC
3 hours ago
4
@LSULeslie @schizoreads I’ve legit never even heard of this
3 hours ago
@chels__ebooks Yes! Josh O’Connor supremacy! I watched this right after I got obsessed with The Durrells ❤️❤️❤️
3 hours ago
@maria_gb75 Keep him
3 hours ago
@baskinsuns AGREED. I love love loved that as a kid (and vowed to be able to do it so someone would love me)
3 hours ago
1
Archives
Bridgerton, Entertainment, Netflix