It’s the end of the world as we know it, and the Four Horsemen of the Apocalypse are fine. And by “fine”, I mean, you know, fine.

Famine is the third book in indie author Laura Thalassa’s The Four Horsemen series. I’ve been gushing about this apocalyptic romance series for years (check out my reviews of Book 1 and Book 2). Each book features a different horseman (Pestilence, War, and now Famine), who is dutifully carrying out his divine task of wiping out mankind. The heroine loathes him, obviously, but invariably notices how very, very pretty he is. Sexy chaos, and the fight for the future of humanity, ensues.

It’s basically enemies to lovers, but where the stakes are really, really high. But fear not, each horseman harbors secret emotional vulnerabilities and a weakness for bold, irreverent women. At the end of the day they are just one identity crisis away from being normal dudes.

Famine, the Third Horseman of the Hot-pocalypse 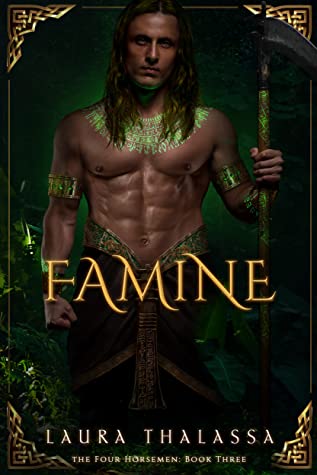 In his short time on earth, Famine has acquired intimate, personal knowledge of how horrible humans can be. He’s not just fulfilling a divine destiny anymore-he’s after vengeance. When a mortal woman shows him a moment of kindness, he finds himself inexplicably drawn to her. But is it enough to turn him away from his deadly purpose?

I am hunger, I am pain, and no thinly veiled attempts to stop me will work.

And if that doesn’t work (Horsemen have a nasty habit of not staying dead), she’ll explore more…carnal options.

What I love about these books is the improbable journey they take you on. You literally want to stab the Horsemen when you first meet them, Famine included, but by the end you’re swooning and cheering for their happily ever after. I honestly don’t know how the author does it. Black magic, probably.

The Cool Table@thecool_table
1.0K Following 1.0K Followers
Yesssssss https://t.co/rGaJC4TAJ4
16 mins ago
1
Latto Brought Big (Villain) Energy to #TheBachelor for episode two of Zach's season. https://t.co/qyqmqEZIpH
10 hours ago
1 4
@pagemelt I know nothing about them but it's a good assumption since the album is titled Dear Wormwood. I have so m… https://t.co/rXXSQbWwlG
12 hours ago
2
@pagemelt isnt the whole album based on the screwtape letters? RED FLAGs
12 hours ago
1
@MrsKowski unfortunately yes
13 hours ago
Archives
Entertainment, The Bachelor

Let Amy introduce you to a few Bachelorette randos