Today, Joe Biden announced his choice for Vice President. I found out his pick via my dad, George.

No one loves Senator Kamala Harris more than Dad. Maybe not even Kamala’s husband. My dad sends me a text every Monday morning, and I screenshot each one and share on Twitter. I even made a photobook out of his texts, brilliantly titling it Texts from My Dad.

Since 2018, over 50% of Dad’s texts have mentioned Harris and his unwavering appreciation of her brains and capabilities. While she was his first choice during the primary, my dad is still a 70-year-old white guy, and he was perfectly happy with Uncle Joe. But he has been advocating for a Biden-Harris ticket since she dropped from the race in December.

Why does George love the junior Senator from California so much? Because he loves smart, effective, kick-ass women. (Duh, he raised one.) He loves that Harris suffers no fools, and being from the South Carolina low-country, George appreciates a good ass-whoopin. There is a long list of powerful men that Senator Harris has schooled with calm derision, including John Cornyn, William Barr, and even Joe Biden. If Kamala ever rolled her eyes at George, he would turn to dust. Happy, smiling dust. 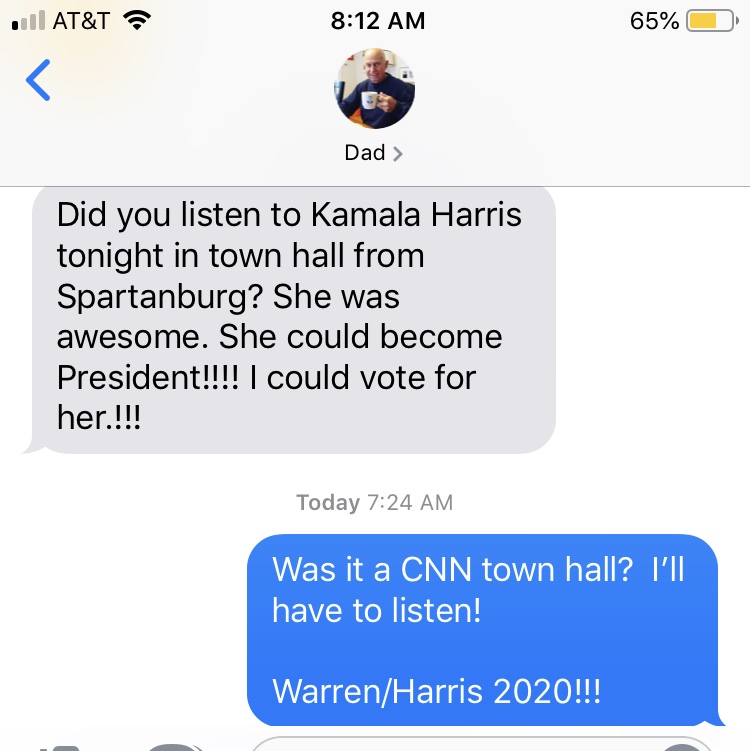 George doesn’t use the word “awesome” lightly. He saves it for things like Clemson football, Mom’s Derby pie, or the way the grass looks after he cuts it. And we heard it from George’s fingers back in May 2019: Kamala is awesome. And I must agree.

I cannot wait for the Vice Presidential debate. #LetThemPlay? (George would insert a football emoji here.) Sure, let them play as long as it’s Harris versus Pence, seated at a table, six feet apart. Actually, make it 5 feet 11 inches apart, just to get under Mother Pence’s skin.

I spoke to George this week, as Biden was teasing the announcement, and he said, “Black women are the life blood of the Democratic party and deserve to be rewarded.” And now we all have been rewarded with this pick. We are in good hands with her, and right now, all I want is to feel safe.

The Cool Table@thecool_table
1.0K Following 1.0K Followers
@jamiesrule @jamadoria @coolstorymere I know you know this, but I"ve had pixie cuts off and on since 1997 and m*n h… https://t.co/VsXyyN7PpC
1 hour ago
4
@LSULeslie @schizoreads I’ve legit never even heard of this
57 mins ago
@chels__ebooks Yes! Josh O’Connor supremacy! I watched this right after I got obsessed with The Durrells ❤️❤️❤️
56 mins ago
@maria_gb75 Keep him
55 mins ago
@baskinsuns AGREED. I love love loved that as a kid (and vowed to be able to do it so someone would love me)
55 mins ago
1
Archives
Current Events, News

Winning During Scorpio Season Is The Best Kind of Winning

Elizabeth Warren Is Right: All Your Face Needs Is Water