You know how the Greeks chilled in a Trojan horse until the citizens of Troy got wasted and let down their guard? Then they popped out and killed everyone, ruining a perfectly good party? That’s what week four of  The Bachelorette was like.

Katie and her reverse harem were finally getting comfortable and forming real connections. Time for a juicy game of Truth or Dare and a new man to enter the cast to mess everything up again!

Watching this show is my Odyssey.

This week’s episode picked up right where we left off last Monday. Everybody hates Thomas (Josh Murrary Lite) because they think he’s a manipulative politician who is only on the show to further himself. Like, yeah, duh? Isn’t that why you’re all here? 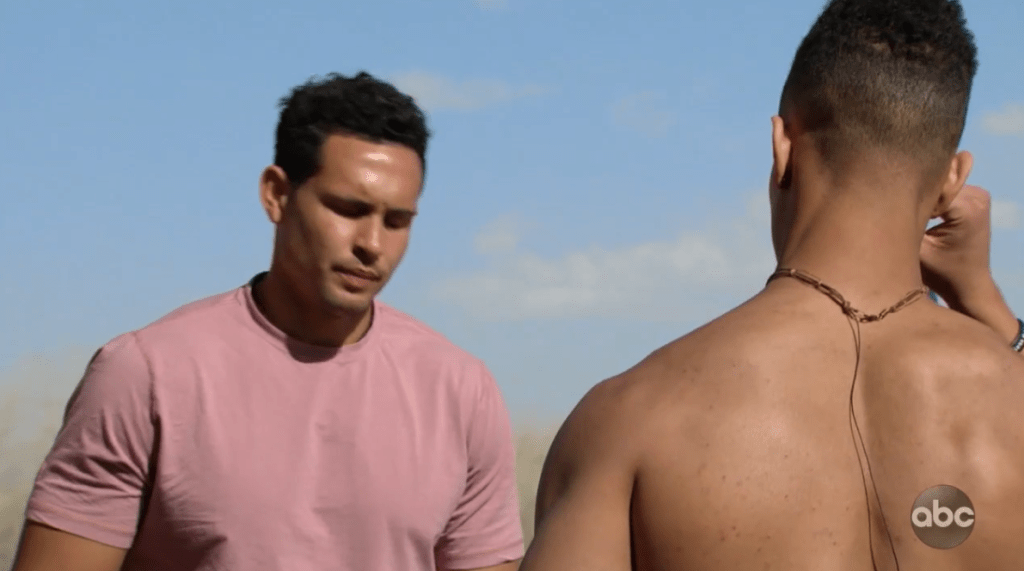 More about him later, I’m sure, because there really isn’t all that much else to do at this hotel in New Mexico.

There are only so many times we can watch Katie go on a picnic date in the same field this season. Instead, Katie, Kaitlyn, and Tayshia laughed their asses off while the men on the group date traipsed around the hotel grounds completing dares. 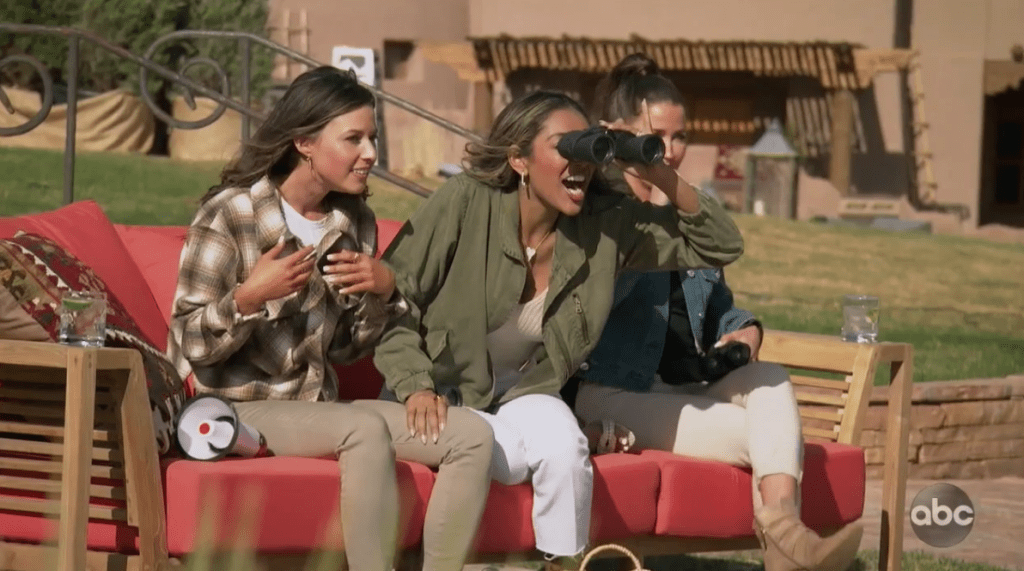 I have no idea what that has to do with falling in love either.

Oh wait, never mind, I figured out what it has to do with love. Because I loved watching gym owner/virgin Mike P. eat 5,400 calories worth of Twinkies when he hadn’t eaten a carb in seven years. I also super loved watching Gregg whisper vaguely dirty innuendos about the 50 states into a giant ear even though it made me question my attraction to him. 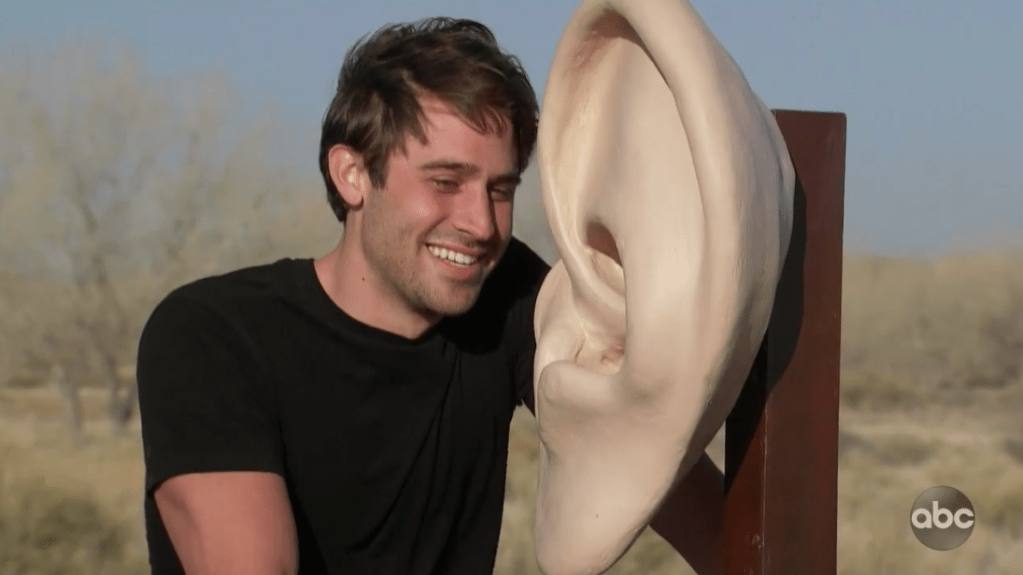 I didn’t love seeing the men wax each other’s various body parts, but, hey,  they made up for it by being force-fed habanero peppers and fake proposing to Katie while tears of pain streamed down their faces.

This show is a fever dream.

You Can’t Handle the Truth

At the after-party that night, Katie said she wanted the men to focus on the truth by being open and vulnerable with her. So Andrew S. gave her a platter of Taco Bell. She wanted to be open emotionally, Andrew, not incontinent. Okay, fine, he also told her that she’s the only woman who has ever understood him and they made out for a hot minute. Never underestimate the power of a cheesy gordita crunch. 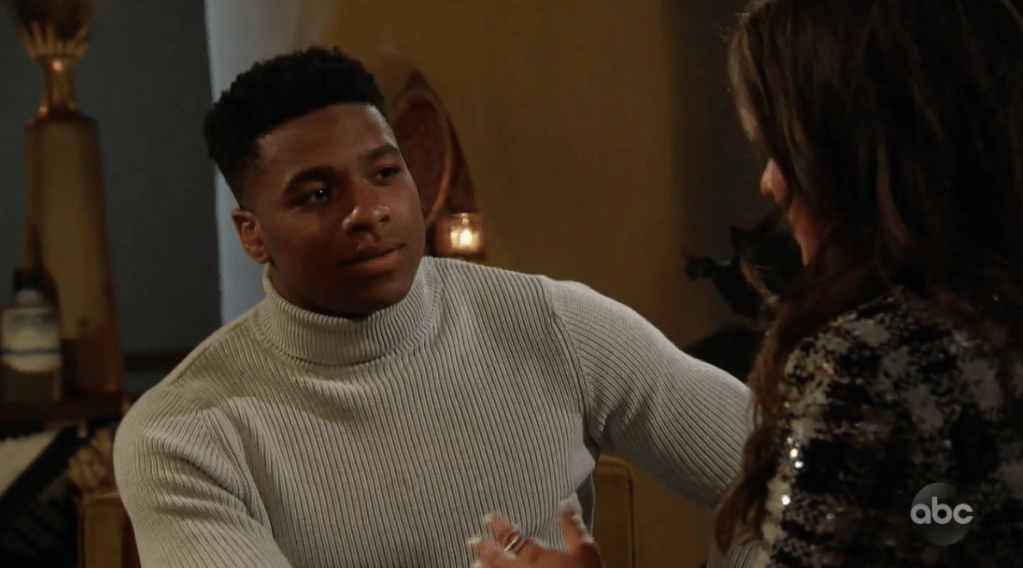 During his time, Greg told her that she’s all he ever thinks about, but like, he hasn’t had access to the internet in like a month so that tracks. Thankfully, Katie is fully indoctrinated too, so she told him that she’s falling for him. Greg and his dimples are here to stay.

Then Tre decided he needed to use his time with Katie to tell her about Thomas’s life goal of being The Bachelor. Andrew tried to talk him out of it because he’s over the drama, but he also just ate a bunch of cold Taco Bell so he can’t be trusted. Tre spilled his guts about Thomas and Katie was so thankful that he got the date rose. 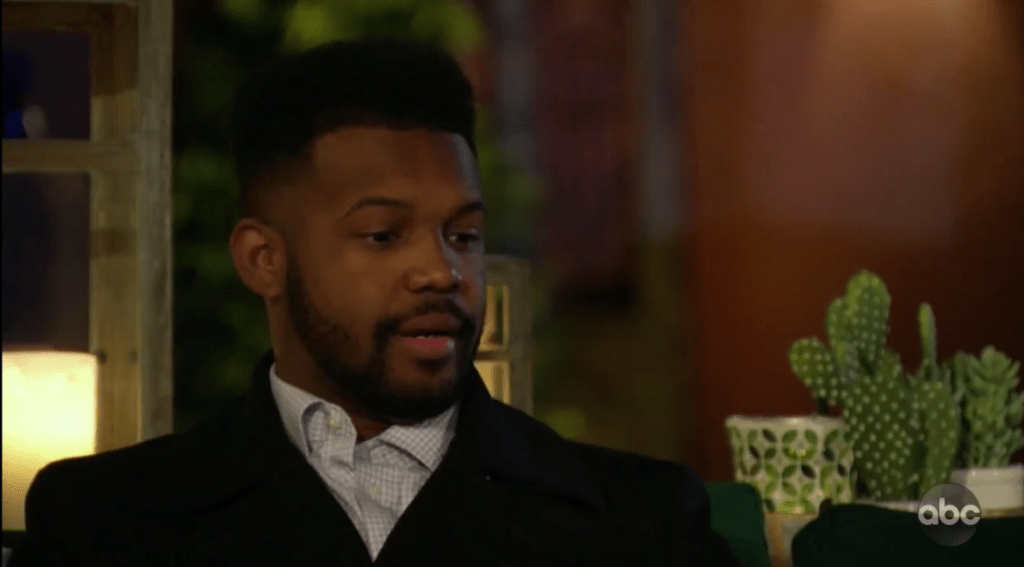 Remember how Katie was always the tattletale on Matt’s season? It seems to be a personality trait she admires.

Katie was in a spiral about Thomas which meant it was time to send in Tayshia with the big guns to really ruin her day. Surprise! There’s a “man from Tayshia’s past” who wants to join the season because he has a mega crush on Katie. What could possibly go wrong?

Tayshia wouldn’t give her any clues on who it was. Instead, she sent her into this weird walled-off courtyard where a mystery man stood with his back to her. He turned around and it was…the worst kept secret in Bachelor Nation history. Blake Moynes is back to date his third Bachelorette of the year. Like this calendar year. 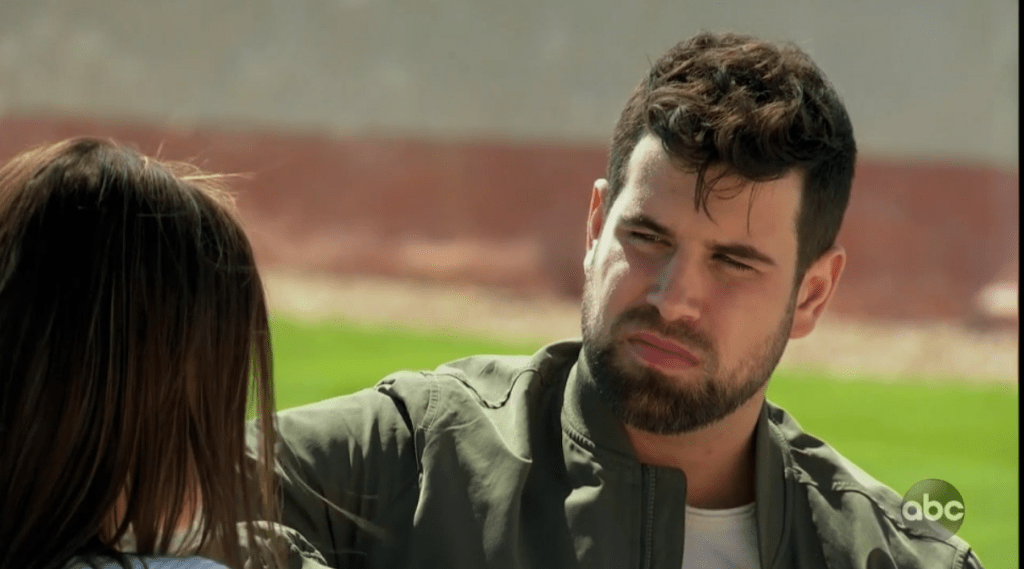 Katie was not not happy to see him. Apparently, they’ve flirted over DM’s in the past, and she thinks he’s hot or whatever, but she also doesn’t want to mess up the relationships she’s building. She told him that she needs to think about it before he can join the cast.

Meanwhile, back at the Hyatt, Thomas was being completely ostracized by the rest of the men. Everyone hates him and he seemed oddly baffled by it. Thomas, you saw what happened when these guys unionized against Karl. Your days are numbered. 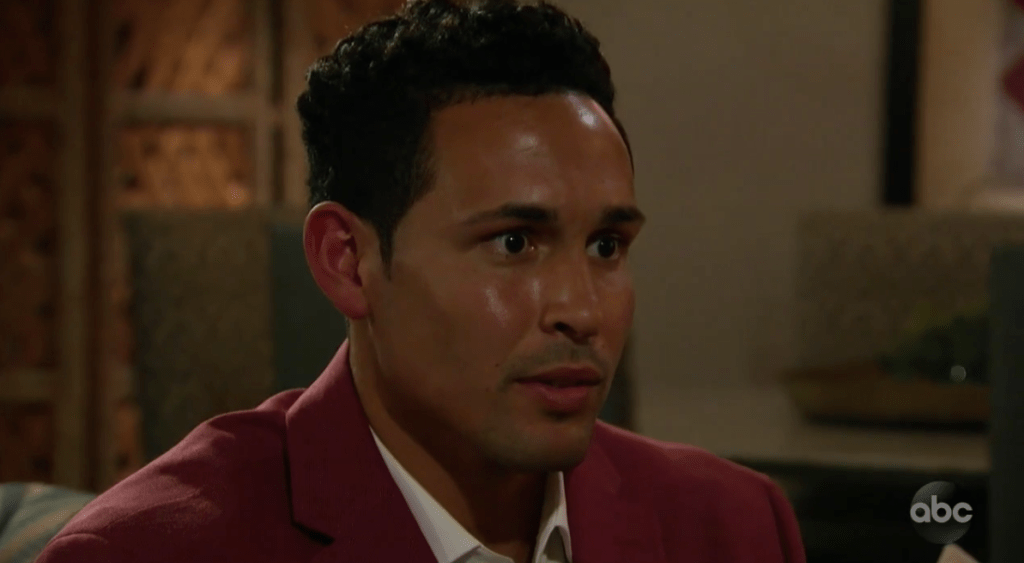 Thomas didn’t get his edges cut that tight to get kicked out on week four, so he went to Katie’s hotel room before the cocktail party to try to smooth things over with her. He told her that he’d be willing to sign anything she wanted swearing to never be The Bachelor because now that he has met her, he only wants her. It was about as convincing as that time I gave a monologue from Beaches to my acting class in high school. 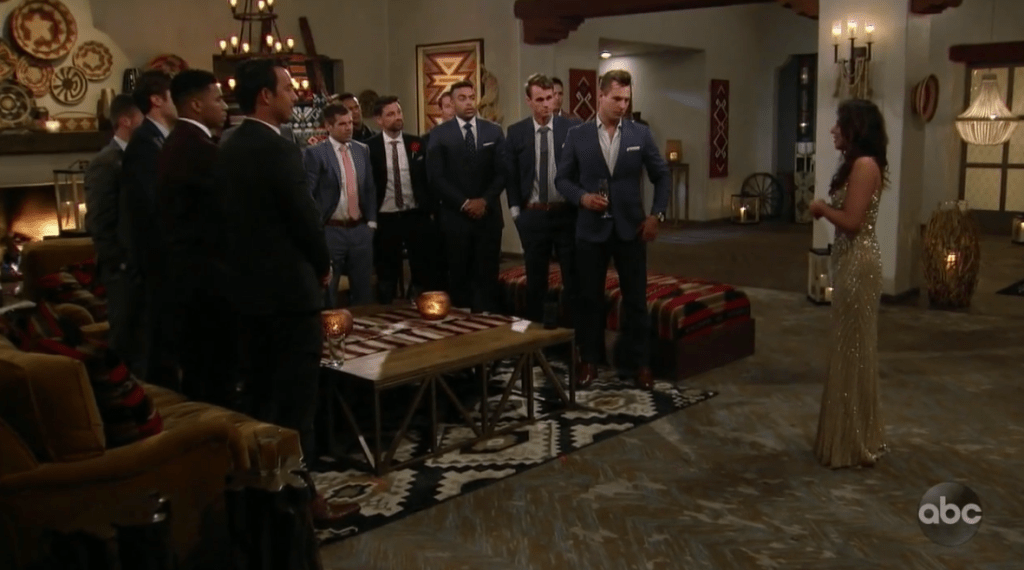 By the time Thomas walked into the cocktail party, the rest of the men had been sitting around for hours waiting. So now they hate him for his personality and for wasting their time. This guy can’t win.

Katie walked in eventually and couldn’t even give a toast she was so over it. Instead, she sped through a couple of quick conversations that revolved around Thomas and one perfect conversation with single Dad Michael who remains my everything.

Everyone else just got increasingly angrier and angrier with Thomas. 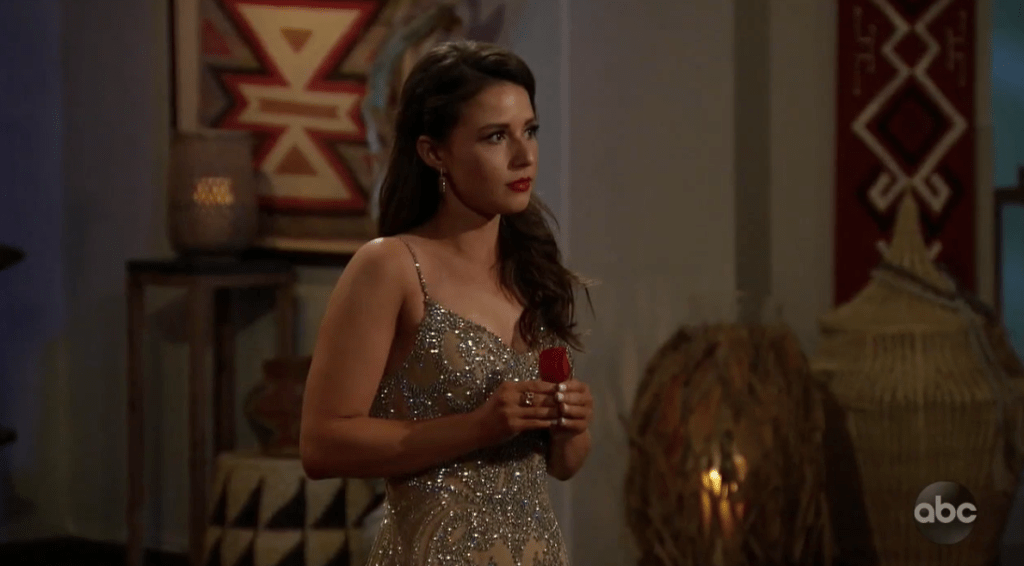 Just before Katie was about to start handing out roses, Thomas interrupted the rose ceremony to plead his closing arguments. He apologized to the men and to Katie and then sweated profusely waiting to see if he’d get a rose.

One by one the roses were handed out until only one remained. Then she called Thomas’s name. The men’s faces looked like they were going to start throwing tea in Boston Harbor. We’re talking full-on revolt. 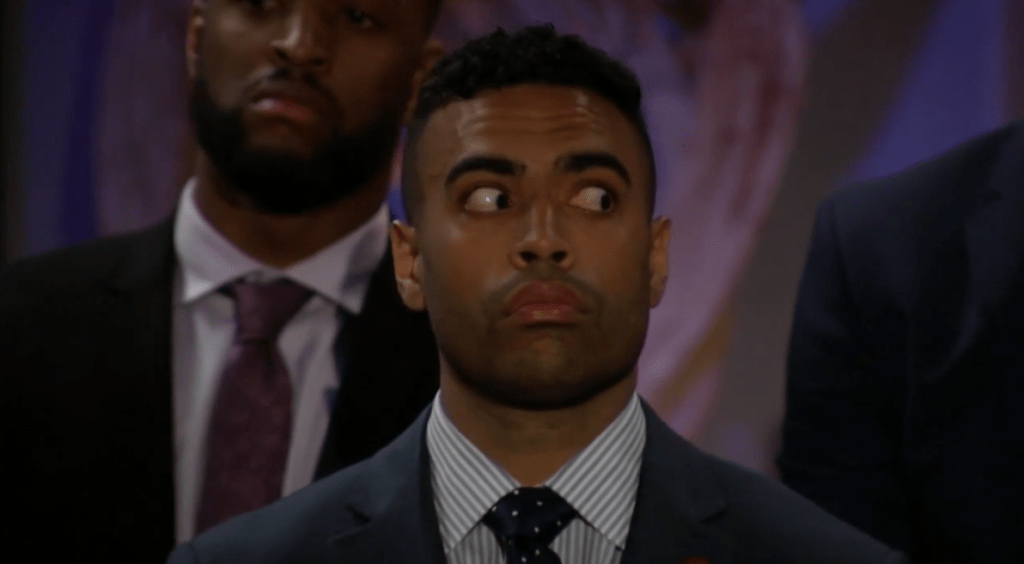 Thomas sighed with relief and went to reach for Katie’s hands when she stepped back and said, “You’re selfish, unkind, and a liar. Your Bachelor audition ends tonight. Get out.”

It was empowering…I guess? But if Thomas was supposed to be some grand villain they really failed his edit. Whatever, he’s gone along with Christian, Conor, and David. Who? Exactly.

After the obligatory toast where Katie emphasized that she only wants men to stay who are there for the right reasons™, she went on a little field trip to Blake’s room. She knocked on the door in her rose ceremony gown and he answered it in his underwear looking like she had woken him out of a dead sleep. 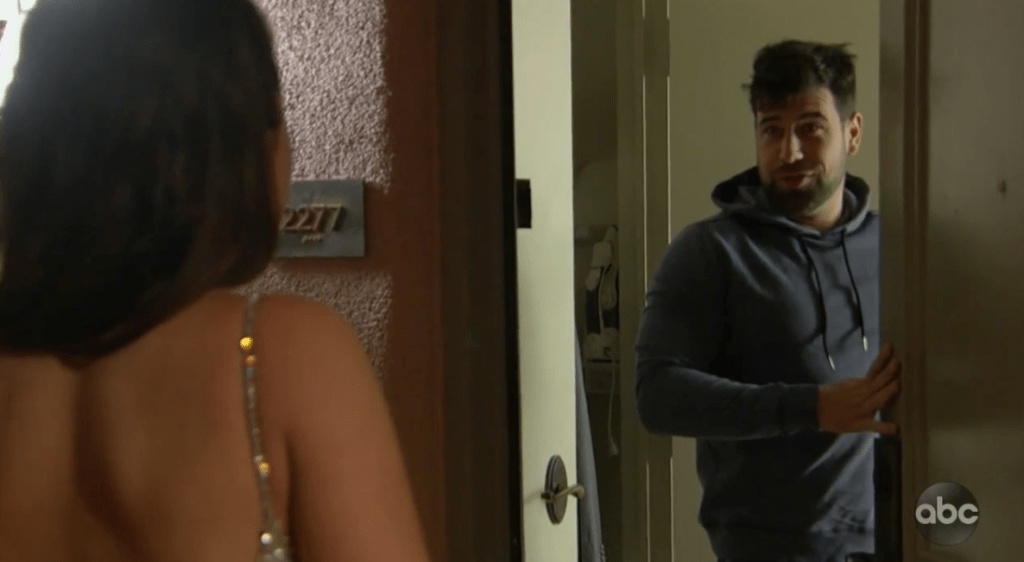 He ran inside to get a robe while she cackled in the hall until he opened the door again in a sweatshirt and boxer briefs like some Canadian version of Winnie the Pooh. She invited him to join the house, and he was so genuinely thrilled that I think I’m rooting for him? Who am I?

She walked out of the hallway while he yelled compliments at her; and then he realized that he had locked himself out of his room. In his underwear. On TV.

You can’t write this ish. 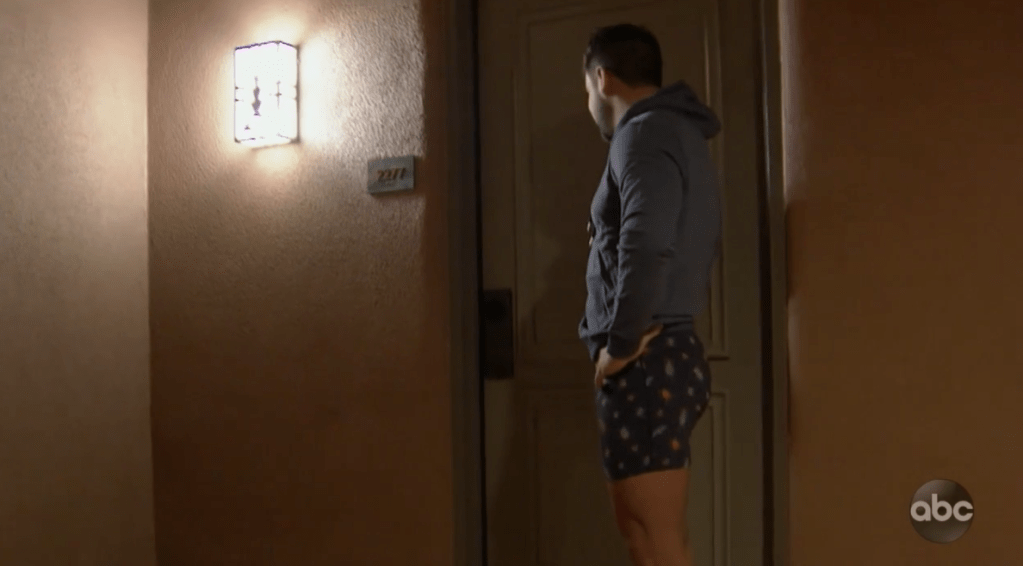 Next week it looks like Hunter is going to go on some sort of roid rage in a wrestling singlet. Oh and everyone will be mad at Blake. Give it to me now. I’m officially moving Blake into my top four with Greg, Connor B., and maybe Michael? Maybe Andrew S.? I don’t even know anymore. Who do you think she’ll pick? Let’s talk.

The Cool Table@thecool_table
1.0K Following 1.0K Followers
@jamiesrule @jamadoria @coolstorymere I know you know this, but I"ve had pixie cuts off and on since 1997 and m*n h… https://t.co/VsXyyN7PpC
3 hours ago
4
@LSULeslie @schizoreads I’ve legit never even heard of this
2 hours ago
@chels__ebooks Yes! Josh O’Connor supremacy! I watched this right after I got obsessed with The Durrells ❤️❤️❤️
2 hours ago
@maria_gb75 Keep him
2 hours ago
@baskinsuns AGREED. I love love loved that as a kid (and vowed to be able to do it so someone would love me)
2 hours ago
1
Archives
Entertainment, Netflix, Pop Culture, Raves