Welcome to week five of Katie Thurston’s journey to find love on The Bachelorette. In this episode, Katie’s menagerie of men plays Bash Ball in wrestling singlets that had the backside cut out like assless chaps, has one semi-romantic date, and collectively hates late-addition Blake Moynes.

You can almost hear Neil Lane polishing his suitcase of diamonds on the sidelines.

Blake Moynes Is Coming in Hot

Last episode Katie sent Thomas home with her dramatic fakeout at the rose ceremony so her boyfriends are feeling good. It was all “new year, new me” vibes like your Instagram feed on January 1st.

Then Tayshia told them all that Blake Moynes is joining the reverse harem. Greg had to hold Connor B. like he had been personally victimized. 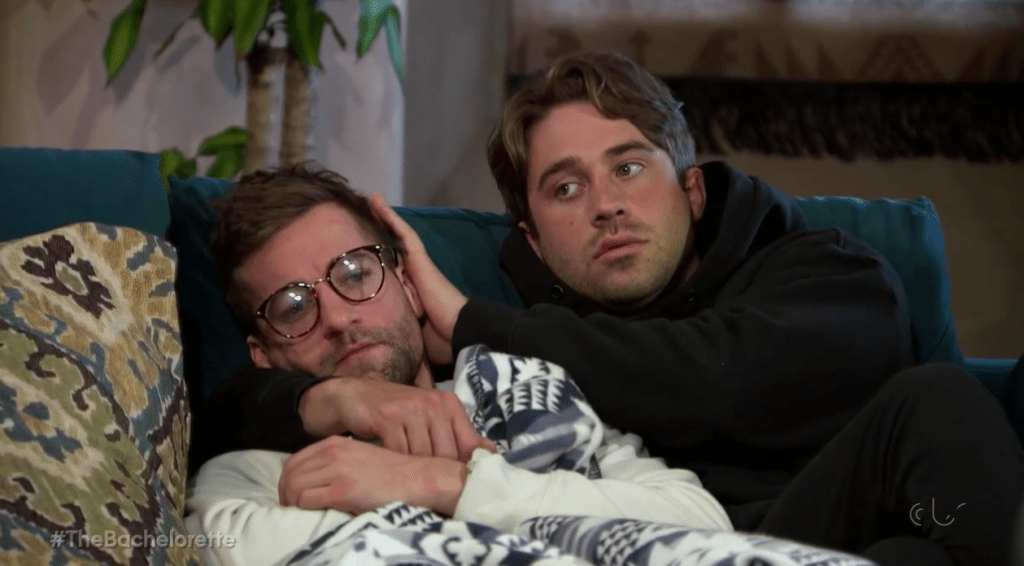 Katie got some advice from Kaitlyn Bristowe about adding a man she likes this late to the season (*cough* Nick Viall *cough*) but all Kaitlyn said was like, “Haha you’re screwed, they’re all going to hate him, but he’ll have a successful career doling out relationship advice on TikTok after, so do you.” 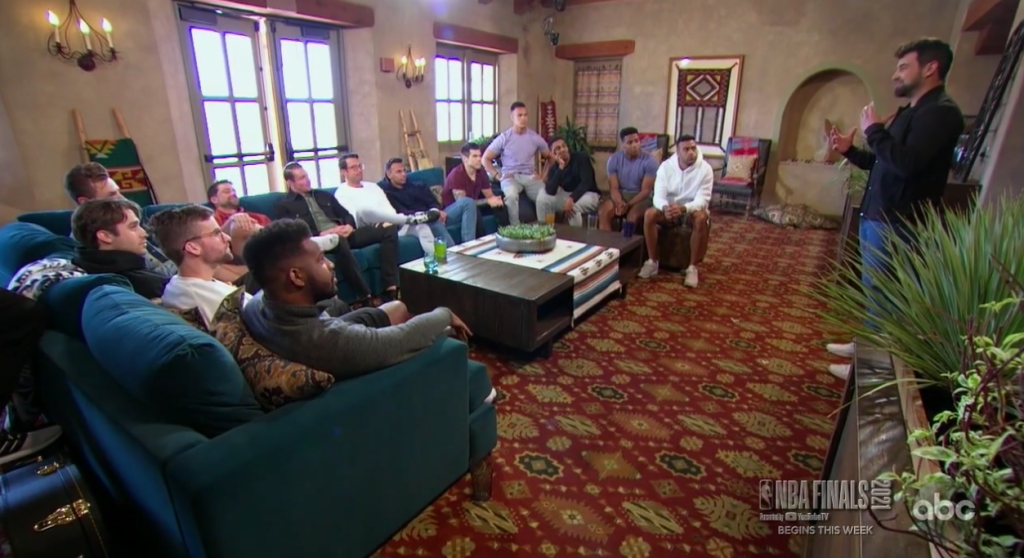 Then Blake entered the lion’s den to face the other men for the first time in that weird hotel conference room this show keeps pretending is a living room. They hate him. He doesn’t seem to care. He’s here for Katie and everyone else can get over themselves.

Hopefully, they start that process soon because Blake got the date card. On his first day. In front of everyone.

The Bachelor gods have spoken and they want everyone to hate Blake Moynes (except Katie).

Blake and Katie Have Chemistry

Who needs to spend that Bachelorette budget on trips to Europe when you can watch two people who are super into each other ride horses and make out in haystacks?

Blake and Katie are into each other and, as much as I didn’t want to like Mr. Three-Peat Moynes, they really work together. I didn’t even cringe when they kissed. It was that good. 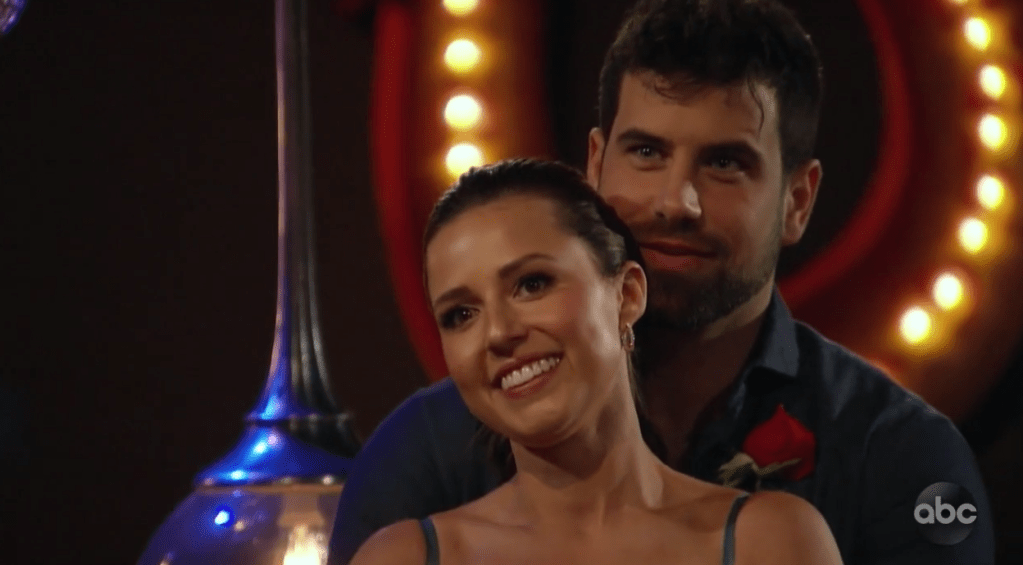 At dinner that night Blake and Katie had an honest conversation about her past experience with sexual assault. While we previously heard her tell her story in that episode where Nick Viall made everyone cry, there was something vulnerable and intimate about her conversation with Blake. I think it was the way that he was actively listening and assured her that he will always be mindful of her experience as they move forward in their relationship.

He got the date rose and I’m having an existential crisis. Am I…team Blake?!?!

They closed the date with slow dancing at a private concert by American Idol Season 17 winner, Laine Hardy. I’m still pretending I knew who that was without googling.

Hunter Tries to Kill Someone on the Group Date 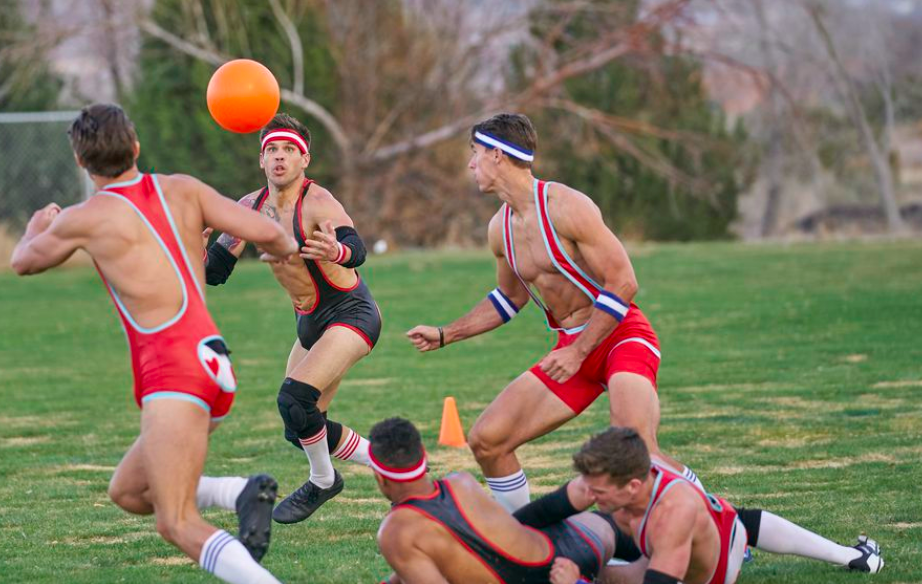 Thirteen of Katie’s remaining boyfriends were invited on the only group date of the week. That can only mean one thing: it’s time to break them up into teams for some ultra-competitive athletic activity and then make the whole thing moot since they’ll all end up at the afterparty anyway.

This time Bachelor in Paradise bartender, Wells Adams and resident flamboyant co-host Franco Lacosta hosted a rousing game of “Bachelorette Bash Ball Battle”. It was basically rugby with basketball nets and the men tackling each other in wrestling singlets with hearts on their butt cheeks. 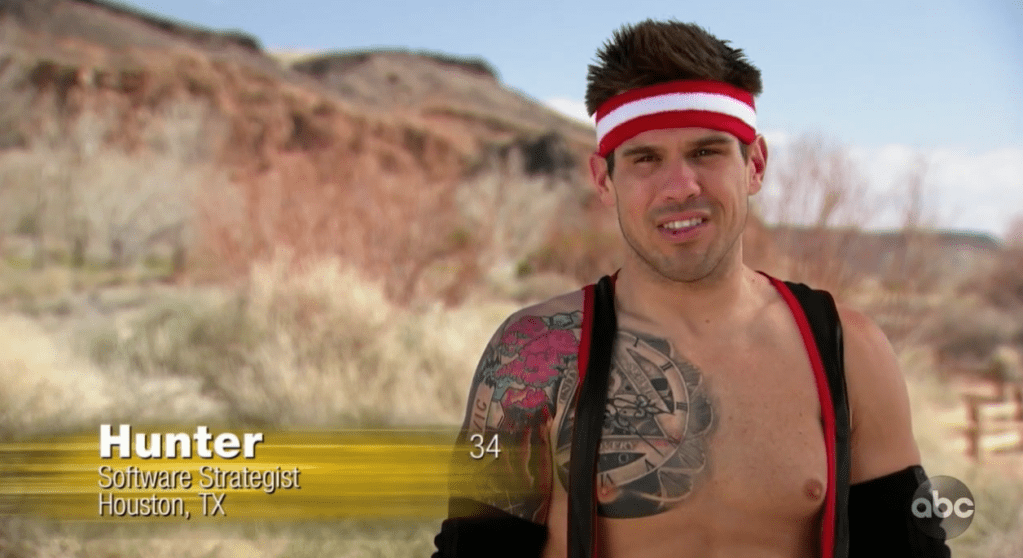 Do you remember that scene in Alice in Wonderland when the Queen of Hearts falls over during a game of croquet and we all see her heart bloomers? It was like that but instead of saying “off with her head!” Hunter just kept repeating “I love the aggression!”

Single Dad/Widower/Bachelor Bait Michael A. got knocked over so hard that Katie cut the whole date off and invited them all to the after-party. No one treats my future Bachelor like that and gets away with it.

Sad Stories at the After-party 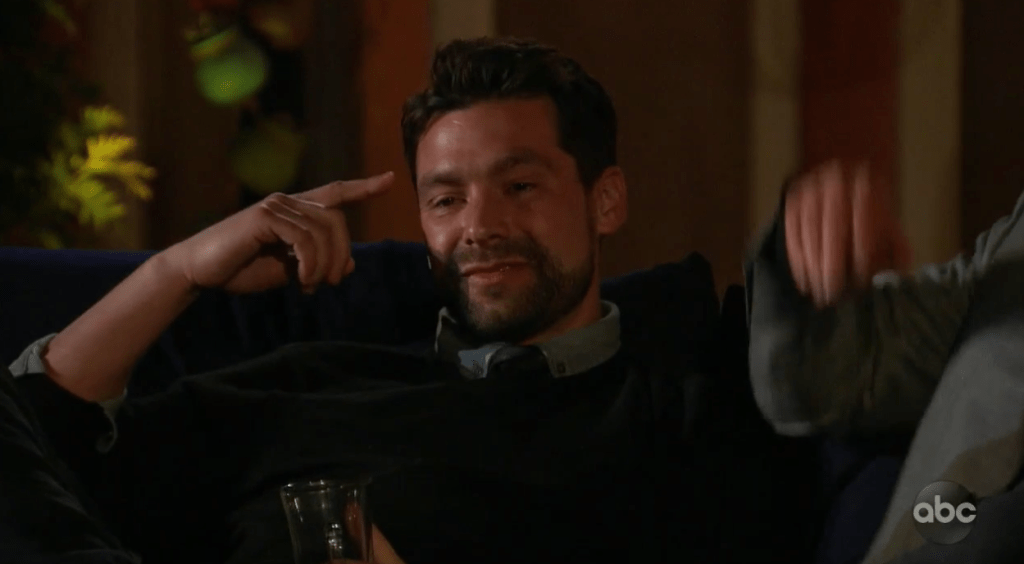 At the after-party that night, Hunter ramped up his aggressive approach by showing Katie pictures of his kids and telling her that he’s so into her that he wants her to meet them in person.

Meanwhile, my Bachelor Michael A. was telling all of the men to appreciate the time they have, because he celebrated his deceased wife’s birthday yesterday while stuck in a New Mexican Hyatt on a dating show. It was so moving. I was crying, Michael A. was crying, Greg was full-on Kim Kardashian ugly crying. It was a moment. Have the man sign his contract already. 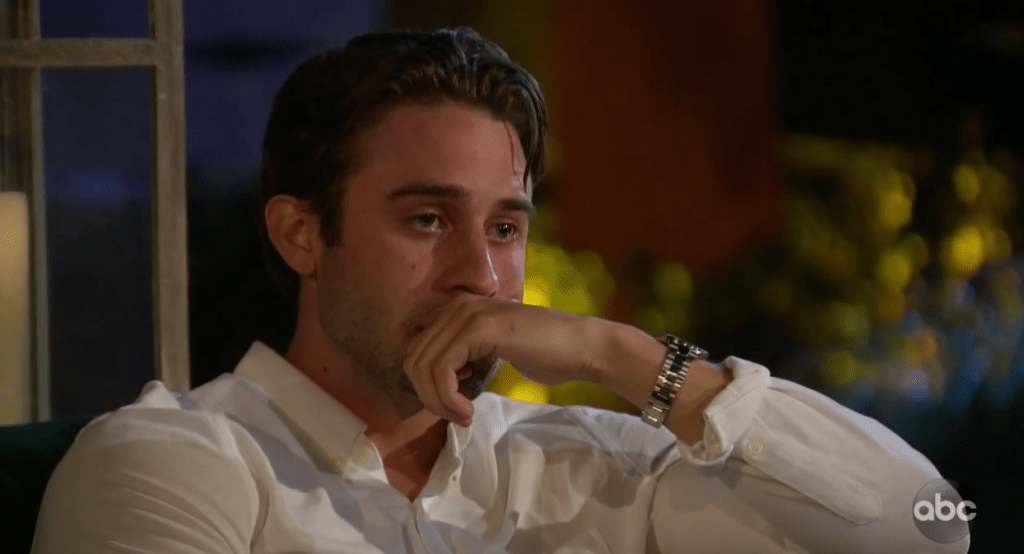 Greg was so inspired by Michael A.’s story that he ran to Katie to tell her that he’s all in. She told him how relieved she is because her biggest fear is that he’s going to quit the show and leave her because he has resting sad face. Which is both mean and incredibly accurate. He assured her that he would never quit and they kissed with relief. I’m a Greg stan, but that felt like some heavy foreshadowing.

In the end, the group date rose went to Hunter with the aggressive sleeve tattoo and roid rage. More on him later. 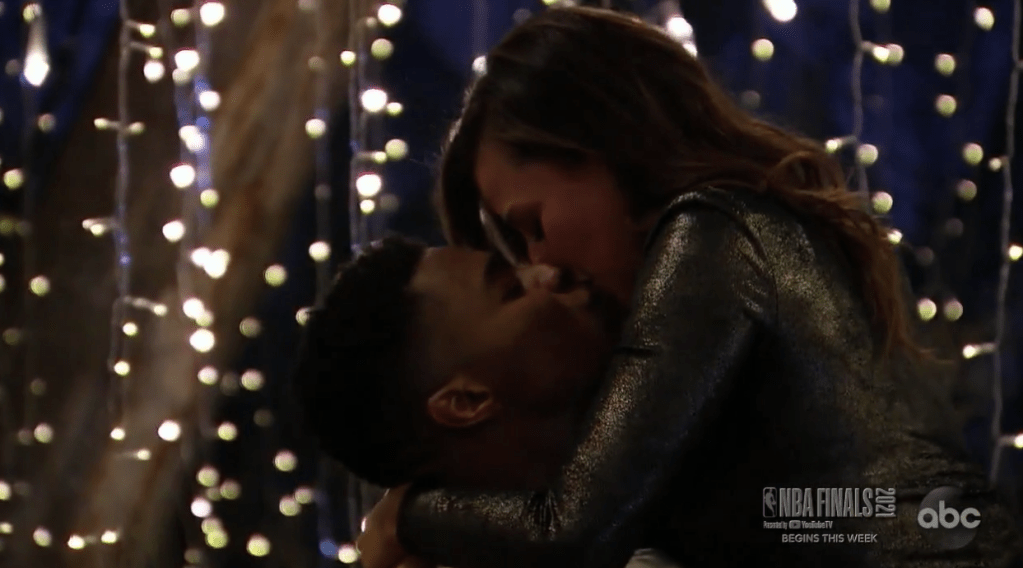 The last date of the week went to professional football player (in Austria) Andrew S. who has been a personal favorite since week one when he showed up with that Bridgerton accent.

Andrew and Katie hung out under some twinkle lights answering would you rather questions that forced them to open up to one another. It turns out that they both had daddy issues, and they’re both into kissing each other. 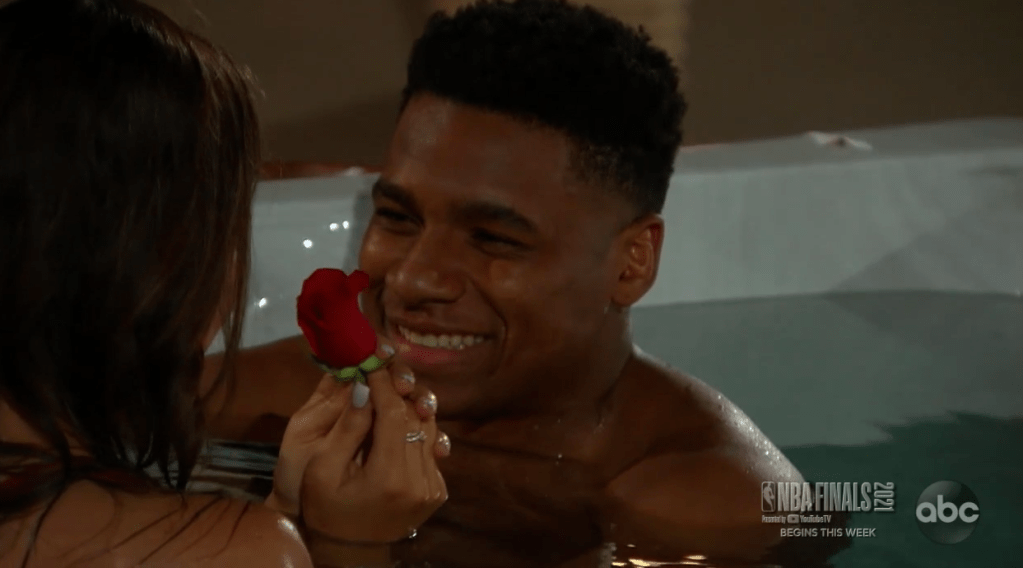 At dinner that night Andrew told Katie that sees a future with her, but he needed to ask her how she’d feel about being in an interracial couple. Apparently one of his exes told him that she would be afraid to have biracial kids. Which, wow. Katie admitted that she could be naive about what they’d face, but she’d never be afraid of doing anything because of what other people think.

They ended their night in a hot tub with flutes of champagne and a date rose. The dream. 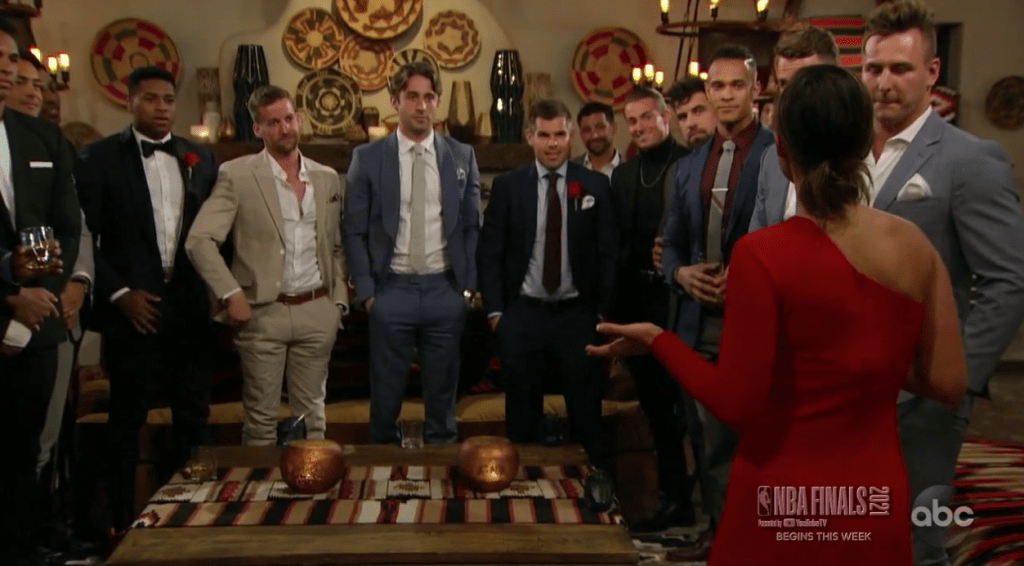 Somehow it was time for the cocktail party which mostly revolved around everyone saying they needed time with Katie and then Hunter monopolizing it. This dude got one taste of validation and was ready to tattoo Katie’s face on his other arm.

There was an argument over a telescope and a picnic date, but mostly all you need to know is that Hunter is gearing up to be the next big villain. It’s your lucky day, Blake Moynes.

There wasn’t a lot of tension at the rose ceremony. Like they tried to make us think that Tre was going home, which like, yeah, soon, but we need him to narrate a few more episodes. Instead, Andrew M., Josh, and Quartney got the cut.

The remaining 12 men in the running for Katie’s heart toasted in their joint honor and then they played a seriously wild super teaser for the rest of the season. No really, you need to watch this.

Katie was throwing up in a bathroom? Literally everyone was crying! Greg was running for his life. And it looks like Blake is going to quit? I want to mainline it into my veins.

The Cool Table@thecool_table
1.0K Following 1.0K Followers
@jamiesrule @jamadoria @coolstorymere I know you know this, but I"ve had pixie cuts off and on since 1997 and m*n h… https://t.co/VsXyyN7PpC
3 hours ago
4
@LSULeslie @schizoreads I’ve legit never even heard of this
2 hours ago
@chels__ebooks Yes! Josh O’Connor supremacy! I watched this right after I got obsessed with The Durrells ❤️❤️❤️
2 hours ago
@maria_gb75 Keep him
2 hours ago
@baskinsuns AGREED. I love love loved that as a kid (and vowed to be able to do it so someone would love me)
2 hours ago
1
Archives
Music, Pop Culture, Sports