Hold onto your cropped suit pants, we’re halfway through season 17 of The Bachelorette and Katie is about to cull the herd from a dozen potential lifemates to a measly seven in a single episode.

It’s like when I help my kids clean their rooms and make them get rid of any Barbies that look chewed on or have a weird haircut after that one mishap with scissors. Only instead of plastic dolls, it’s you know, human men with real feelings. Fun!

Katie kicked off this episode by inviting Tayshia and Kaitlyn to her suite to talk about where she stands with the guys. Very little tea was spilled. We all know she likes Blake, Greg, and Michael A. but wishes she could take everyone to the fantasy suites. This isn’t new news; but wait, there’s more.

Basically, someone at The Bachelorette recently binge-watched Too Hot To Handle and decided to torture the cast. I respect it.

Painter/walking gif, Justin got the first one-on-one date of the week. I like Justin because he has the most meme-able face of all time. Katie likes Justin because…I actually have no idea why.

They got the requisite fake wedding date hosted by photographer Franco Lacosta. Wedding dresses were worn, intense vows were spoken, and then they kissed. If you’re thinking it was fun and flirty like Tayshia’s wedding day date with Zac, you’re wrong. Those two actually had chemistry. 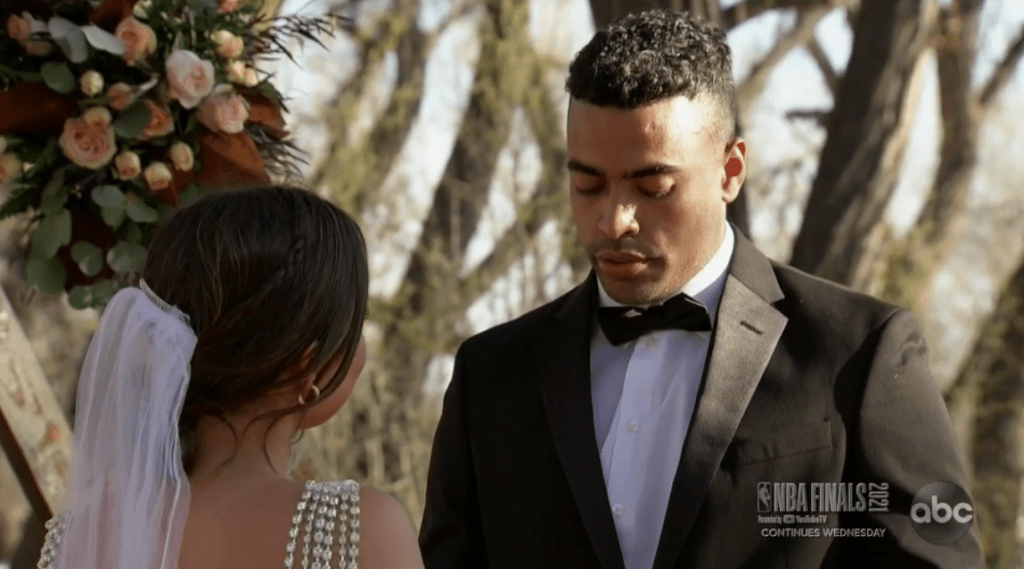 At dinner that night Katie told Justin that she was awkward during the wedding date because it’s an absurd activity to participate in on a first date.

Just kidding. It was awkward because Katie’s dad passed away so thinking of her wedding brings up her grief. Oh, and she found out that her dad wasn’t her biological father so now weddings bring up anxiety because her bio-dad wants to be involved. It is messy.

Justin reacted…fine? I mean he was nice, but Katie was all “this could be the beginning of love” and gave him a rose. They danced to a song performed in a private concert by MAX. I don’t know, it was fine, but I highly doubt they’re going to be end game. At least we’ll get to keep watching him dramatically roll his eyes on camera. 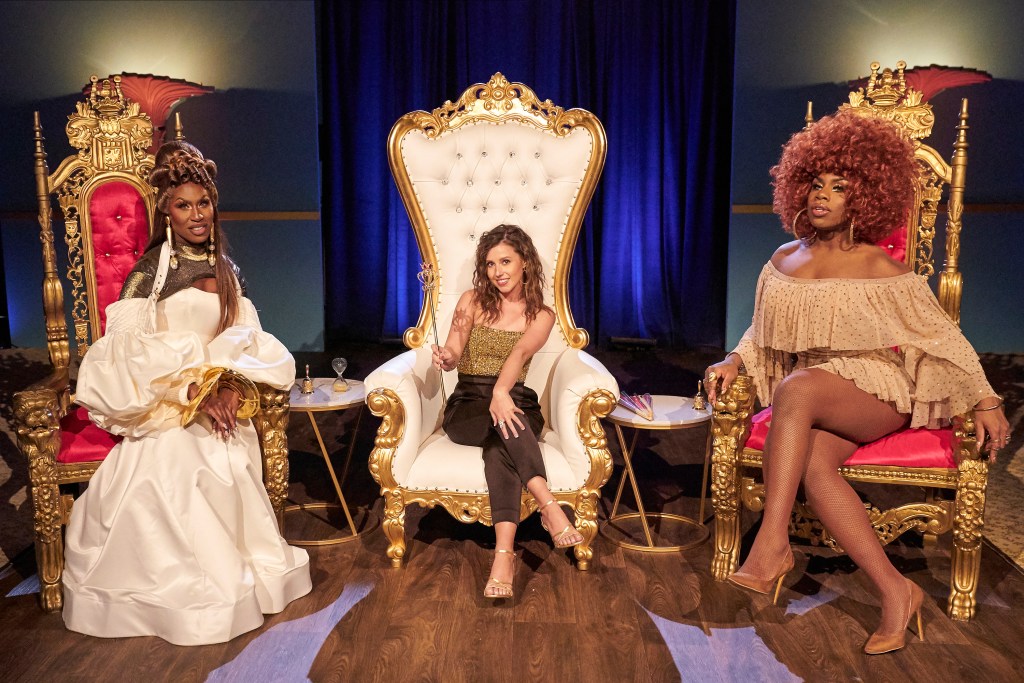 If there’s one thing I love it’s hot men roasting each other to make themselves look good. The only thing that could make it better is if said roast was hosted by two Drag Queen All-Stars. Oh hi, Shea Couleé and Monét X Change. It’s a good thing they were there because these guys are terrible at roasting each other.

Katie and the queens sat in thrones while 10 of the men (everyone except Justin and Connor B.) lobbed insults at each other. Yet, somehow it wasn’t fun? Other than Greg reciting an awkward poem, everyone just made fun of Hunter. 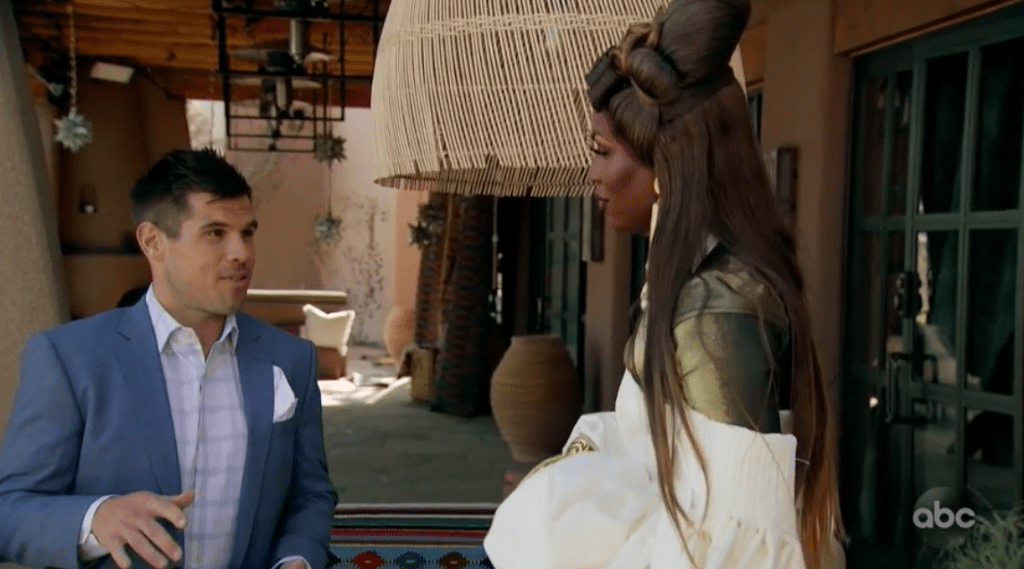 I realize this is the pot calling the kettle black, but come on, not even one joke about Brendan’s A Flock of Seagulls haircut? I’m disappointed.

If I have to hear anyone talk about Hunter for another single second I will change the channel. 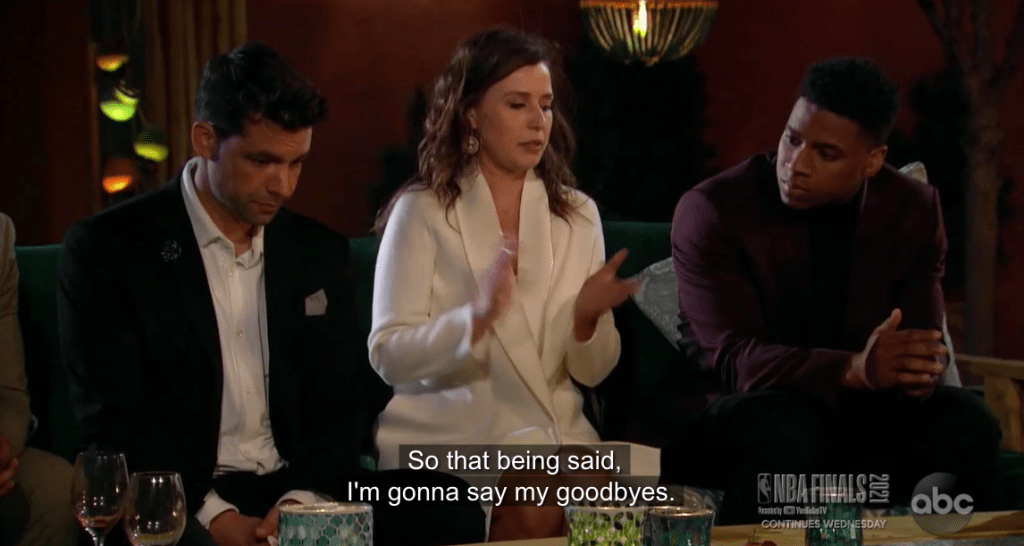 Anyway, at the roast Hunter said that he was falling in love with Katie, but Tre had overheard him tell one of the drag queens that he’s not in love yet. How dare you disrespect a queen like that! The guys think Hunter is a super fan who participates in Bachelor Nation forums. Which like, whom among us doesn’t?

Katie got so stressed out that she threw up in a bathroom and ended the date. I could have done without the sound effects of her retching behind a closed door, but that’s just me.

Connor B. is Deep in the Friend Zone 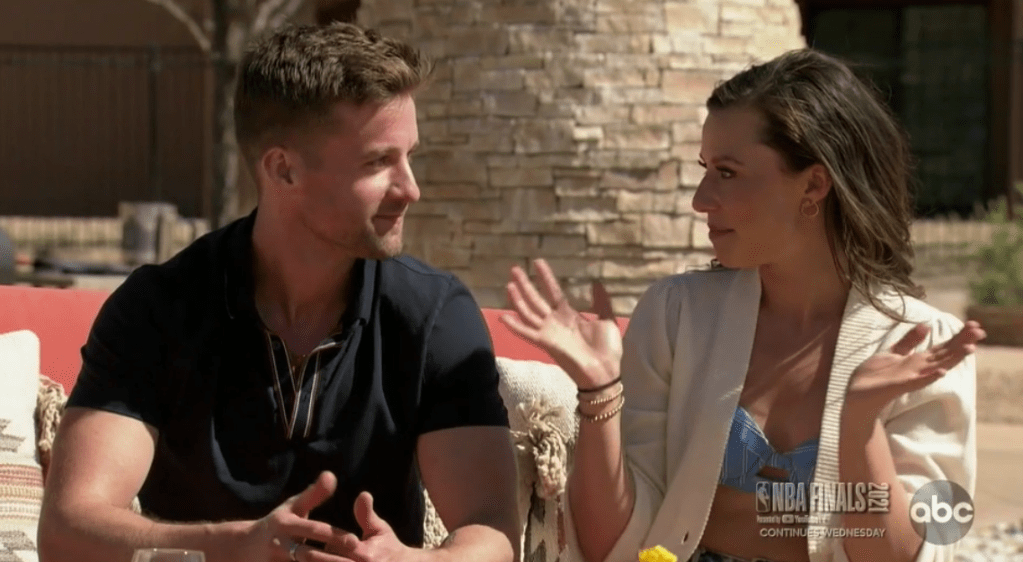 It’s finally time for Connor B. (the cat) to get his one-on-one time with Katie! These two started off hot and heavy on night one, but they’ve fizzled with every awkward kiss. It wasn’t a great omen when they got a double date with Kaitlyn Bristowe and her fiance Jason Tartick. That’s the Bachelorette version of bringing a friend on a date as a third wheel because he won’t catch the hint.

Connor B. is like a nerdier Jed Wyatt. You don’t trust him, and he wears his shirts way too unbuttoned, but he’s still charming. Alas, Katie hates kissing him. In fact, she hates kissing him so much that she showed up at his hotel room before the dinner portion of their date to break up with him.

Okay, fine, it was actually a sad goodbye. She cried and told him that he’s wonderful and deserving of love, but there’s something missing when they kiss. Yeah, like skill.  For his part, Connor was a perfect gentleman, even comforting her when he saw how distressed she was. It was sad and sweet.

Then he looked at the camera and asked, “How bad of a kisser am I?”

Connor B. went back to the main hotel to grab his bags and say his last good-byes and that’s when things got wild. The other men had a full-on meltdown. Who knew he was so beloved?! There was hugging, words of affirmations, wailing and gnashing of teeth. It was a moment.

Not for Blake though because as soon as he realized that Katie was alone in her suite he grabbed a boombox and pulled that move from Say Anything. Boombox over his head blaring the song they danced to on their date at her bedroom window.

After that it was a very smiley Katie being shoved up against a wall for a hot make-out session Connor B. could only dream of.

This season is Blake’s to lose.

Time to Cut Some Dead Weight

Katie walked into the cocktail party the next night ready to kick ass and take some names. She was like, “Sorry, boys, I already know who I’m picking,” and canceled the party. You either throw her up against a wall and kiss the hell out of her or you go home.

Off they went to the rose ceremony with pure panic on their faces when she grabbed the first rose and asked if she could speak to Hunter in private. THE DRAMA.

Everyone was freaking out that he was going to get a rose, but instead she just wanted to finish the conversation they were having before he made her throw up last time. 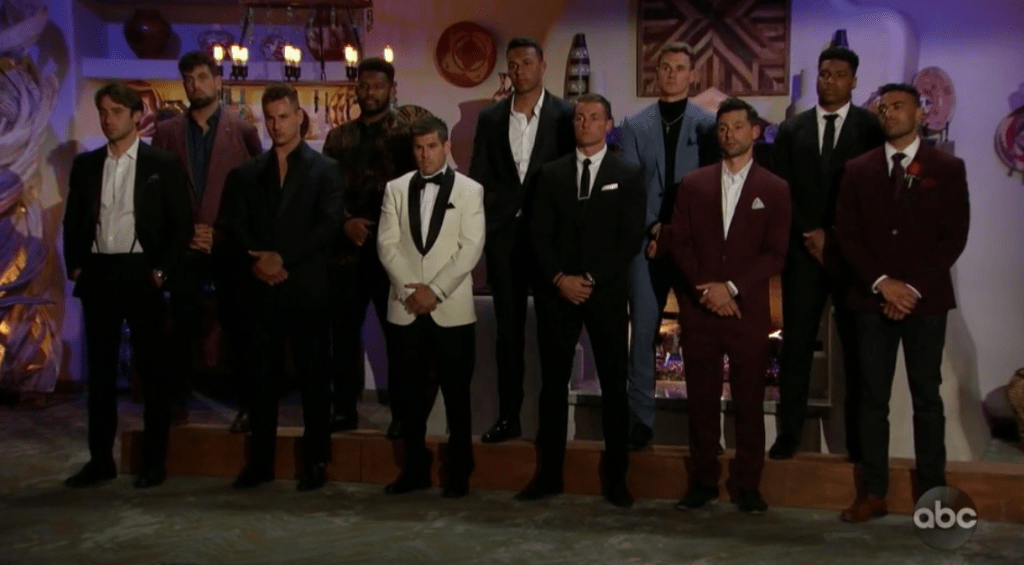 The roses went to boner lover Blake, gif Justin, professional football player (in Austria) Andrew S., Katie’s favorite Greg, single dad Michael A., Mike P. the virgin, and then it was a dramatic pause to see who would get the last rose. Would it be Hunter?

Nope, it went to Brendan with the bad hair. Two weeks until hometowns and that’s the decision she’s making. Interesting choice, Ms. Thurston.

In the end, Tre, Aaron, James in a box, and Hunter went home in addition to Connor B. from earlier in the episode. We won’t miss them at all, but Bachelor in Paradise starts August 19th so I’m sure they’ll be back long before we’re ready to see their faces again.

Next week it looks like we’ll get even more crying as Katie whittles her seven remaining men down to the four who will attend “hometown” dates. I’ll be on vacation, but I once wrote a recap while in the hospital after birthing my third child so who knows if I’ll pop up or not. Who do you like for Katie? My money is on Blake, but Greg is a close second if he doesn’t break her heart first. Let’s talk in the comments.

The Cool Table@thecool_table
1.0K Following 1.0K Followers
@jamiesrule @jamadoria @coolstorymere I know you know this, but I"ve had pixie cuts off and on since 1997 and m*n h… https://t.co/VsXyyN7PpC
2 hours ago
4
@LSULeslie @schizoreads I’ve legit never even heard of this
1 hour ago
@chels__ebooks Yes! Josh O’Connor supremacy! I watched this right after I got obsessed with The Durrells ❤️❤️❤️
1 hour ago
@maria_gb75 Keep him
1 hour ago
@baskinsuns AGREED. I love love loved that as a kid (and vowed to be able to do it so someone would love me)
1 hour ago
1
Archives
The Bachelor, TV