Rachel and Gabby (and the 21 men they currently share custody of) are back for week three of The Bachelorette and things are about to be messier than ever.

If you like watching fake wedding photoshoots, a guest appearance by one of the Queer Eye guys, and a plethora of men discussing Rachel and Gabby like they’re placing a Doordash order: this is the episode for you. 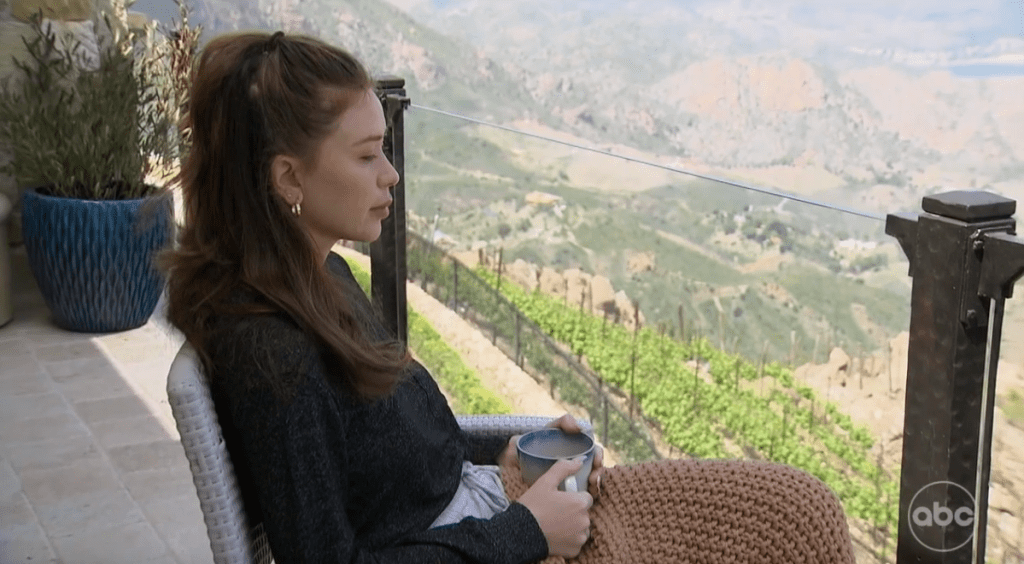 Week three’s episode opened with Gabby staring pensively out at the view from her balcony with a coffee mug in her hand like every women’s lit book cover you’ve ever read. When Rachel joined her, they quickly came to the conclusion that it was time to split the group and decide which men would keep dating each of them. 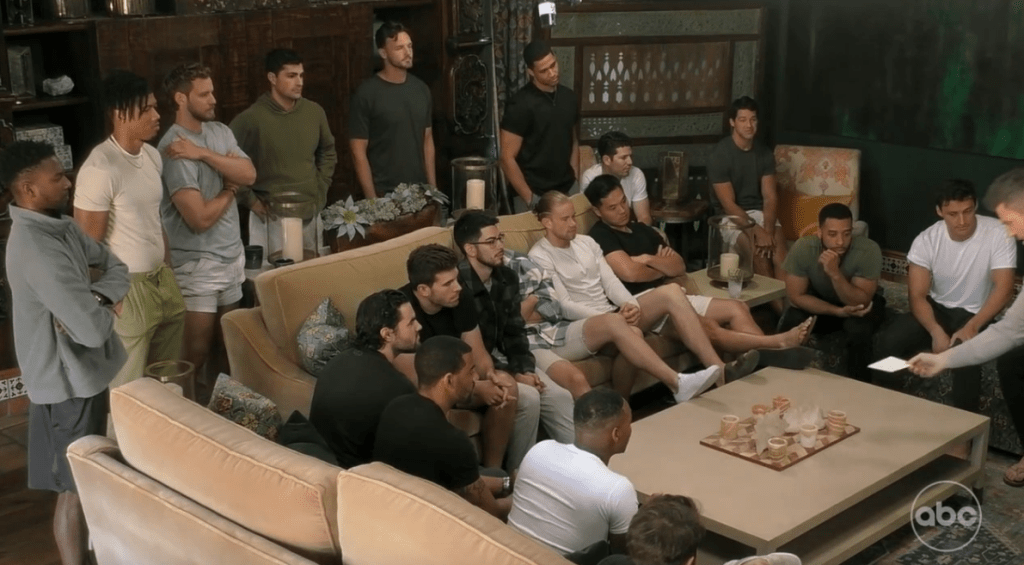 Haha, good luck with that, because back at the mansion half of these aspiring TikTok stars were talking about having a connection with both of them.

Which, okay, that’s probably normal since Rachel and Gabby are gorgeous and available and most of these men have never dated anyone without going home and matching with the next.

But this is The Bachelorette, you can’t date multiple women at once.

We save that kind of high-brow entertainment for Bachelor in Paradise. 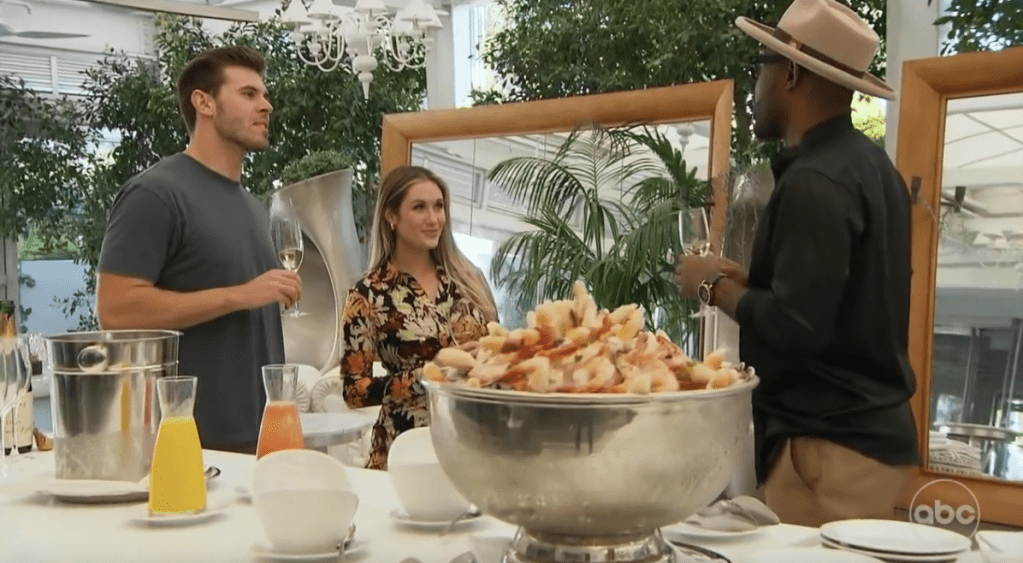 Forget all of that impending doom for now though. It’s time for Rachel’s one-on-one date for the week and things are about to get romantic.

Inexplicably, Rachel and Zach (25, technical recruiter) spent their day getting pedicures and trying on outfits with Karamo Brown who had planned a “glamorous Hollywood movie premiere date for them. 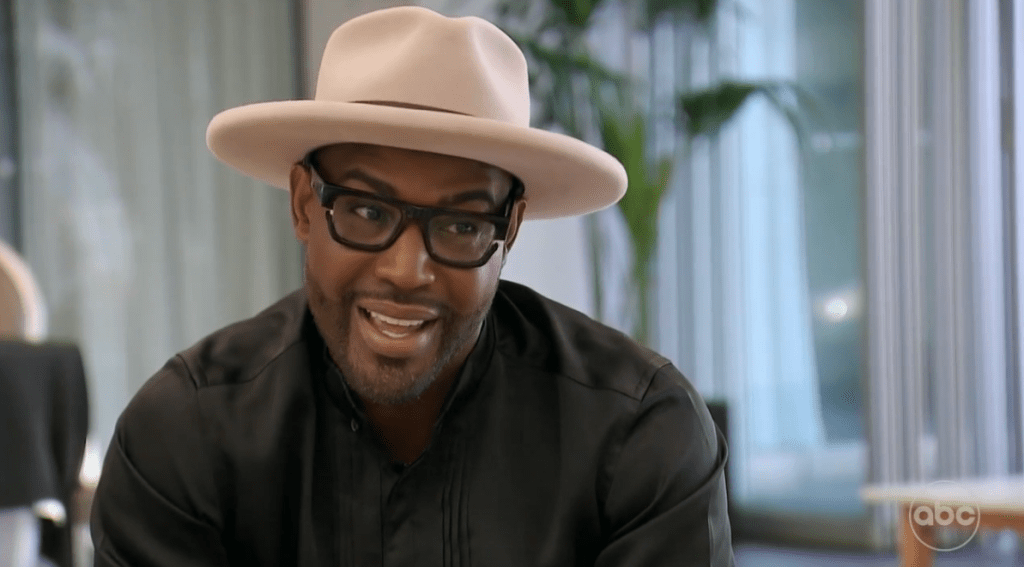 Oops, did he say movie premiere? He meant they were putting on formal wear in order to walk a fake press line and sit in an empty theatre while home videos played on a screen and composer Matt White played the piano.

Rachel and Zach ate this ish up.

I don’t know if it’s because they aren’t allowed access to outside entertainment in the mansion and thus are in major screen withdrawal like my 9-year-old on a camping trip, but they loved it. 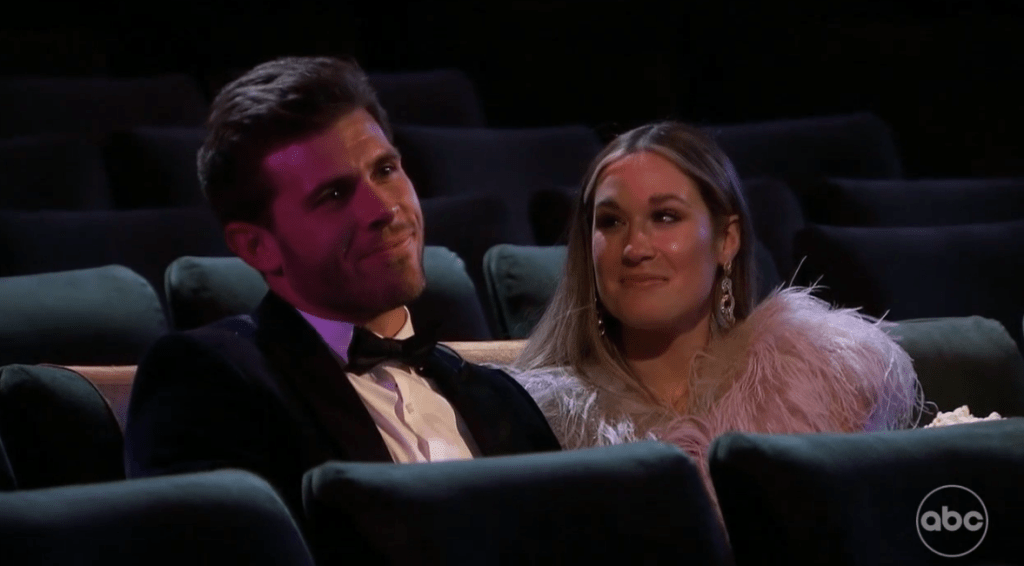 They were crying, kissing, dancing, and sharing memories of their dads taking them to watch airplanes take off at airports. By the end of the date he got the date rose and they both declared it one of the best nights of their lives.

Zach even said he thinks Rachel could be his future wife and that he’s falling really, really hard for her.

Weird, the last time I watched home movies I ended up traumatizing my kids with footage of my c-section.

Meanwhile Back at the Mansion 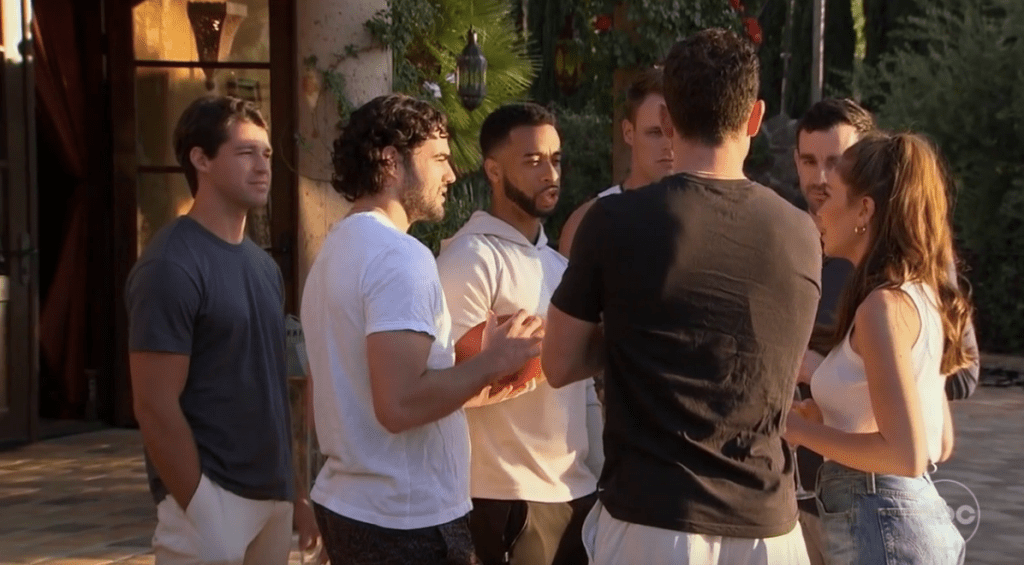 Rachel might have been having the best day of her life but, back at the mansion, Gabby was…not.

All she wanted was to surprise the 20 men she’s supposed to be dating and hopefully get some more quality time with them. Instead, she ended up stuck in a football-throwing sausage fest and getting ignored.

That sounds like every frat party I’ve ever attended. 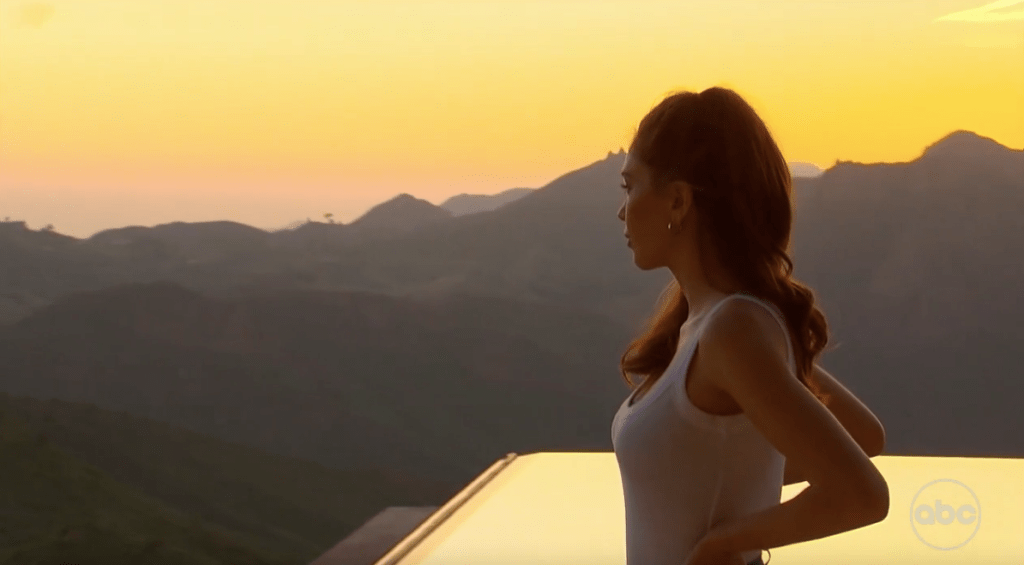 By the end of her outing, Gabby was sobbing, questioning her worth and wondering if she even deserves to be loved by the person she wants.

Sounds like it was perfect timing to send her on a one-on-one date.

Nothing provides an emotional buffer for a woman questioning her self-worth like bringing her octogenarian grandpa as a third wheel on her date. Here comes Grandpa John! 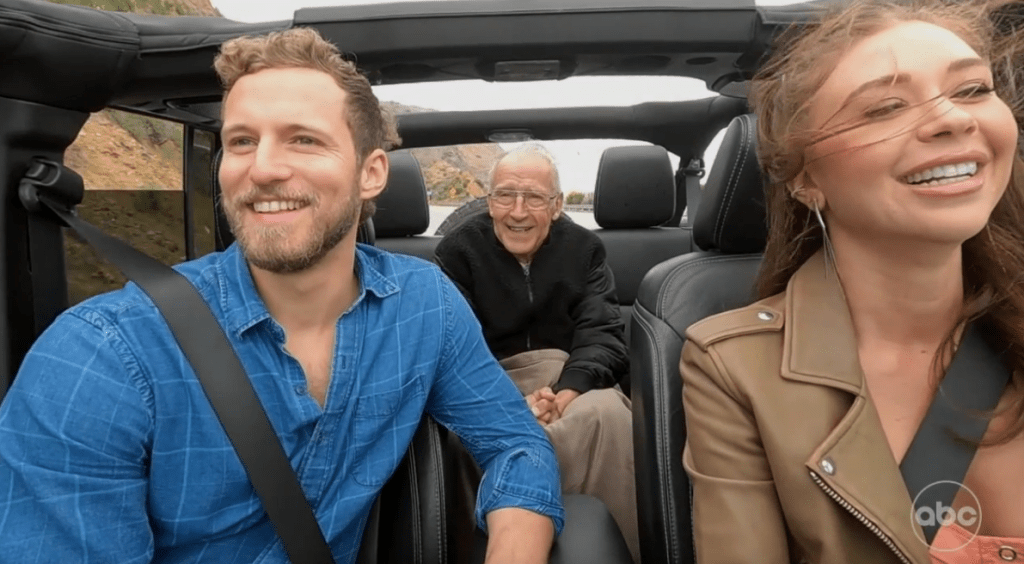 Someone give this man his own television show.

Technically Gabby was taking Erich (29, real estate analyst) to a sound bath and bowling alley, but really it was all about Grandpa John who took one look at the sound bath yurt and was like, “What the hell is this?” 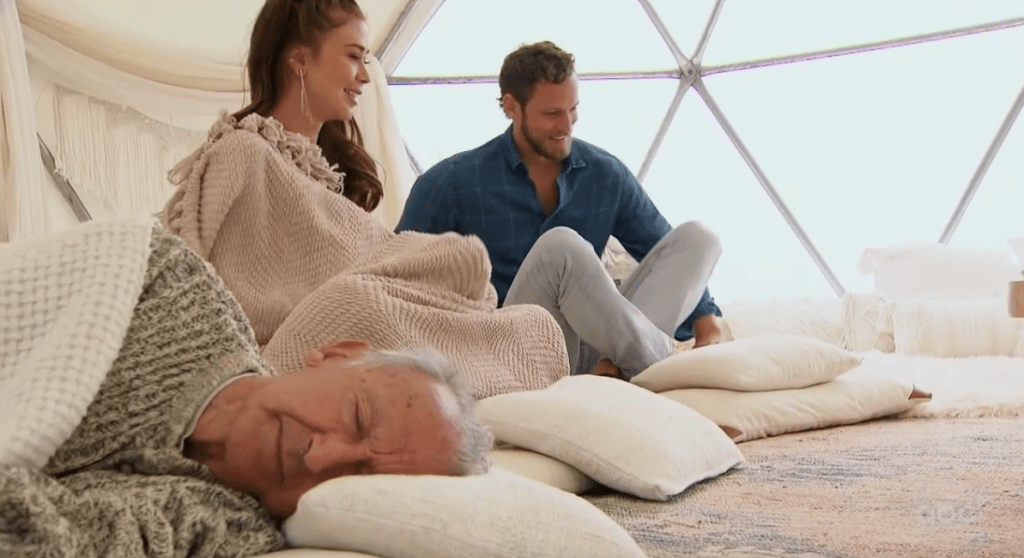 It was a funny and light-hearted date but there was a dark uncurrent that was lurking beneath the surface.

At dinner that night, Erich (to his credit) wanted to get deeper with Gabby by telling her about his parents who are soulmates. But getting deeper with Gabby means hearing about the childhood trauma of having a mother who never loved her. 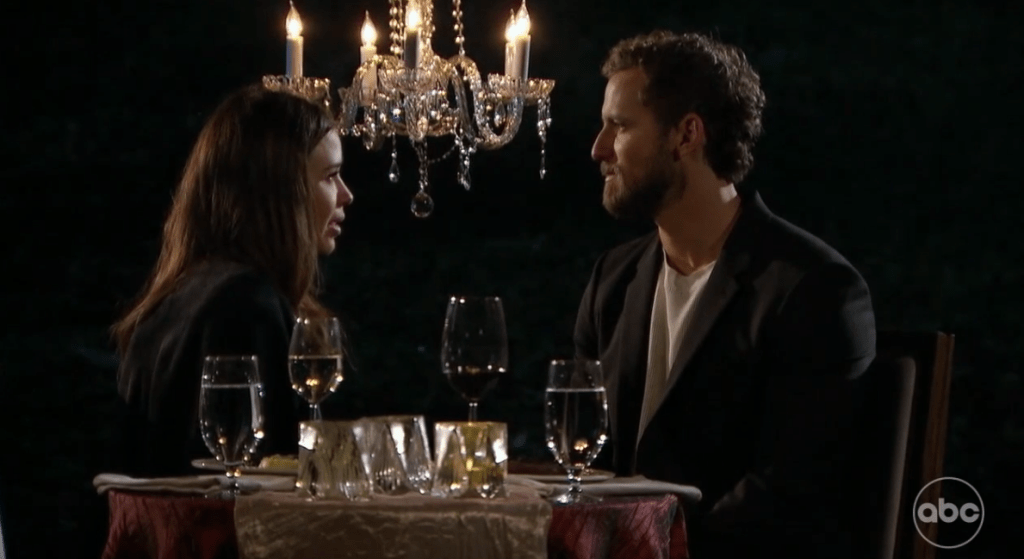 That rejection by the person who should love you most has shaped her and made her the amazing person she is, but it also makes her feel broken and unworthy of love.

Erich’s response to her story was fine considering it was their first date, but he definitely didn’t seem as enamored with Gabby as she became with him.

He got the date rose, but if he hurts her I will riot. 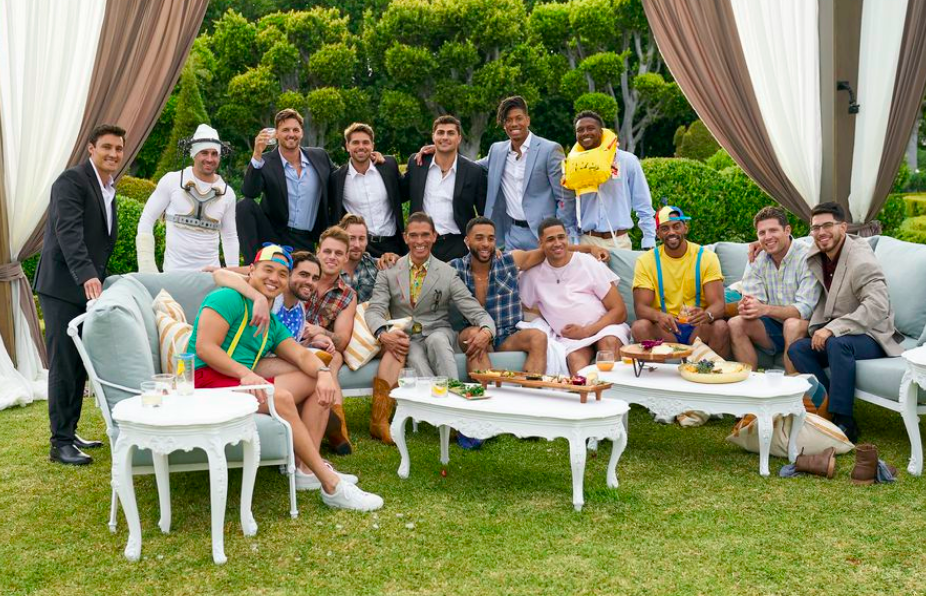 To close out the week of dates, Rachel and Gabby took all of the other 19 men on the biggest group date this franchise has ever seen.

It went about as well as you would think. 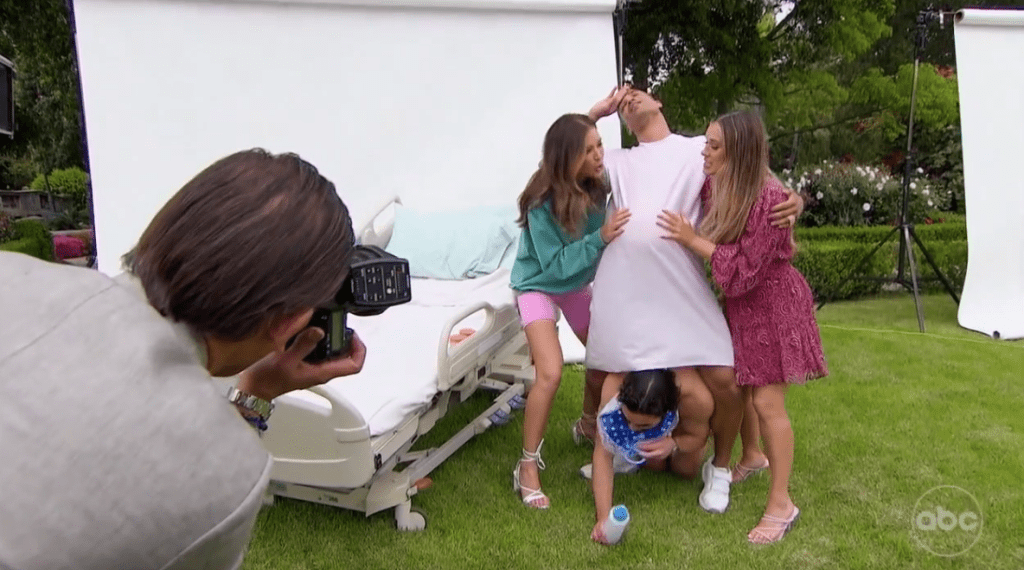 For the first portion of the date, Bachelor favorite, Franco LaCosta, dressed the men up like babies and car accident victims for a photoshoot. It was mostly a waste of our time, but the fake proposal portion did provide a chance for a couple of the men to shine. 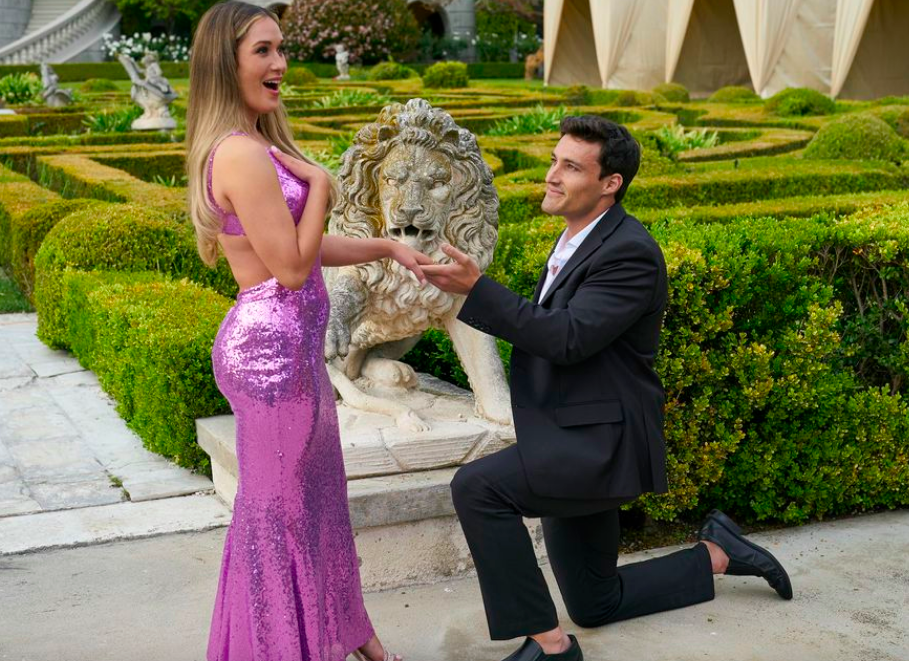 Namely, Tino who is gunning for Rachel, and Nate who has his eye on Gabby and won my affection last week.

At the after party that night, Rachel was having the time of her life with man after man coming up to her and declaring her their choice.

Meanwhile, man after man was taking Gabby aside to tell her that she was not their choice. In fact, Hayden told her that she’s “rough around the edges” and Jacob said that if she were the only woman left on the show he would leave. 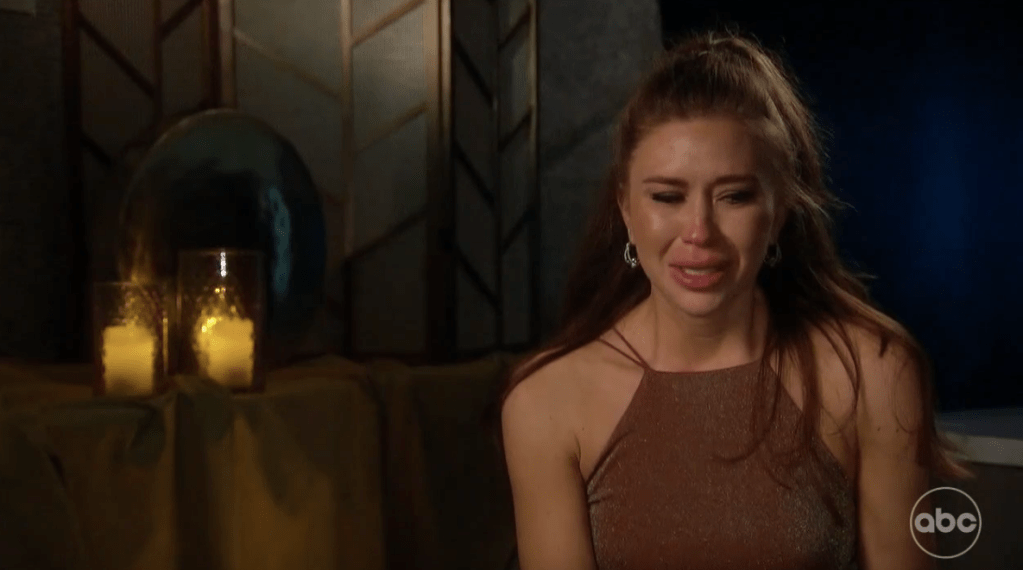 So, while happy Rachel gave her date rose to Aven, Gabby was like “none of you assholes deserve my rose” and walked out.

A shocked Rachel followed Gabby out to find out what happened and when she was told the story she was pissed. Rachel wanted to go back and tell the men that talking badly about one of them wasn’t gaining them points with the other, but Gabby said, “I’m here to find a lifelong partner, not to teach some dudes how to act.” 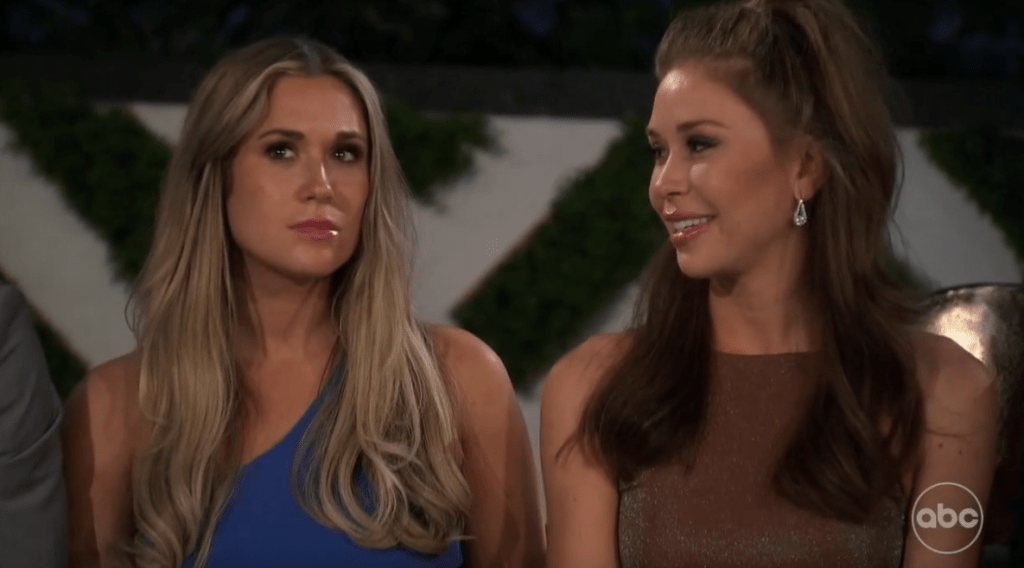 Please put us all out of our misery.

No Cocktail Party for These Losers 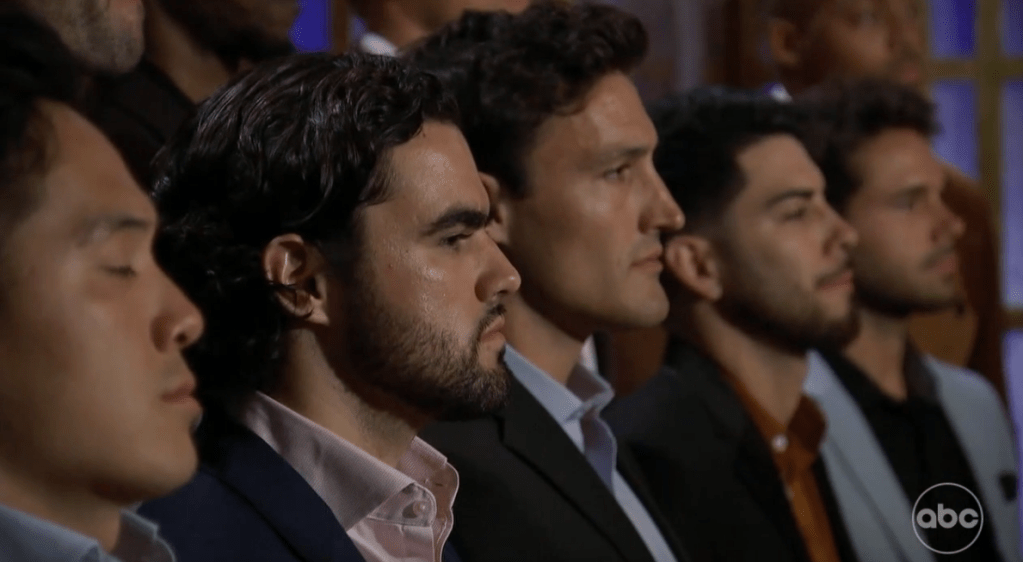 There comes a time in every relationship when you have to define the relationship and after last night’s debacle, that time is now.

When the men arrived that night for the cocktail party a few of them were still considering their options between the two women. Better make it quick, gentlemen because here comes Jesse Palmer to break the news.

There would be no rose ceremony and as of this moment, they have to pick one bachelorette and stick with their choice.

The men were shooketh. 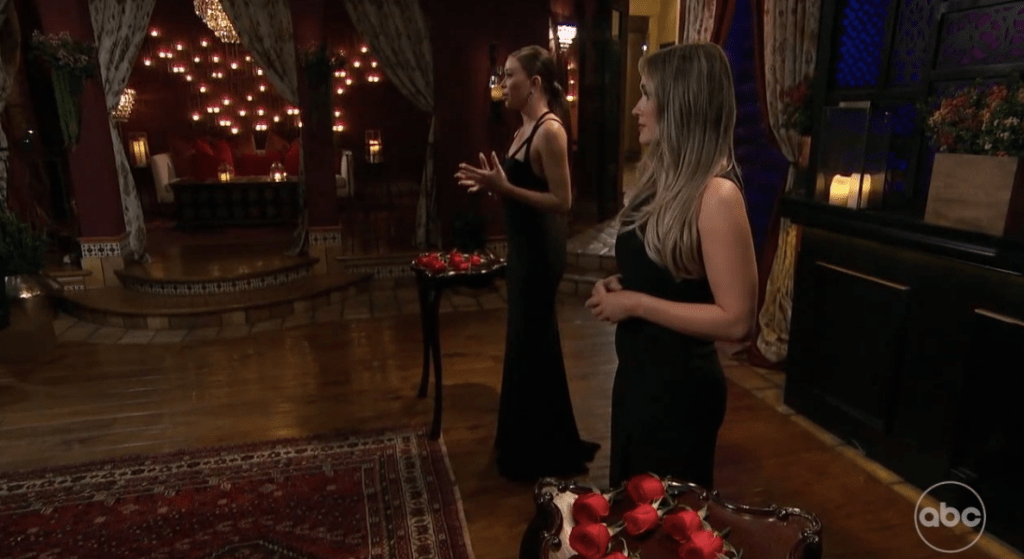 No one had any idea what they were doing but the plan they came up with was to give each woman 9 roses and to have them take turns picking men.

If the man accepted their rose they would only date that woman from now on.

If the man rejected their rose they would go back to the risers to wait and see if the other woman would pick them. However, the rejected woman would lose one of her roses to hand out. 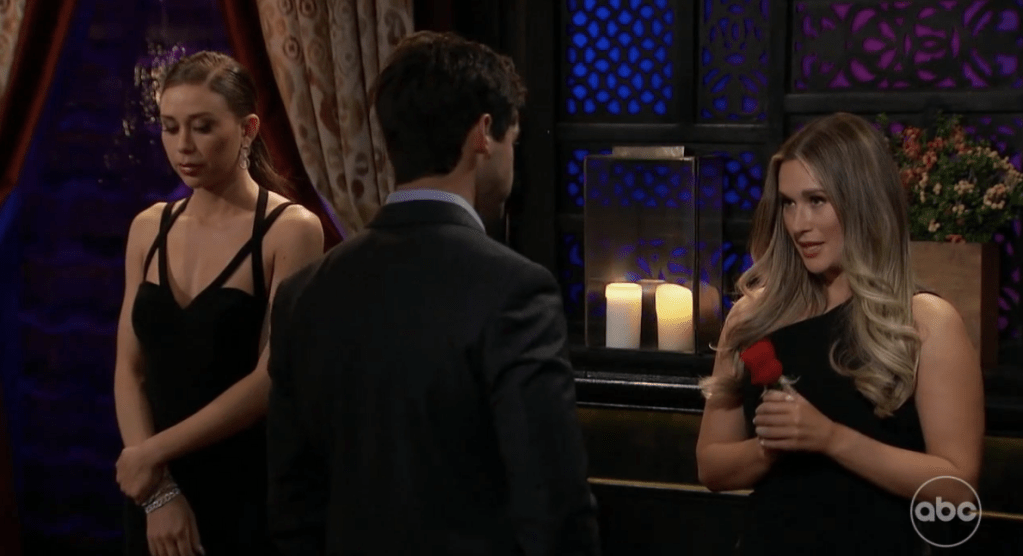 Then Termayne rejected Rachel’s rose and it all fell apart. 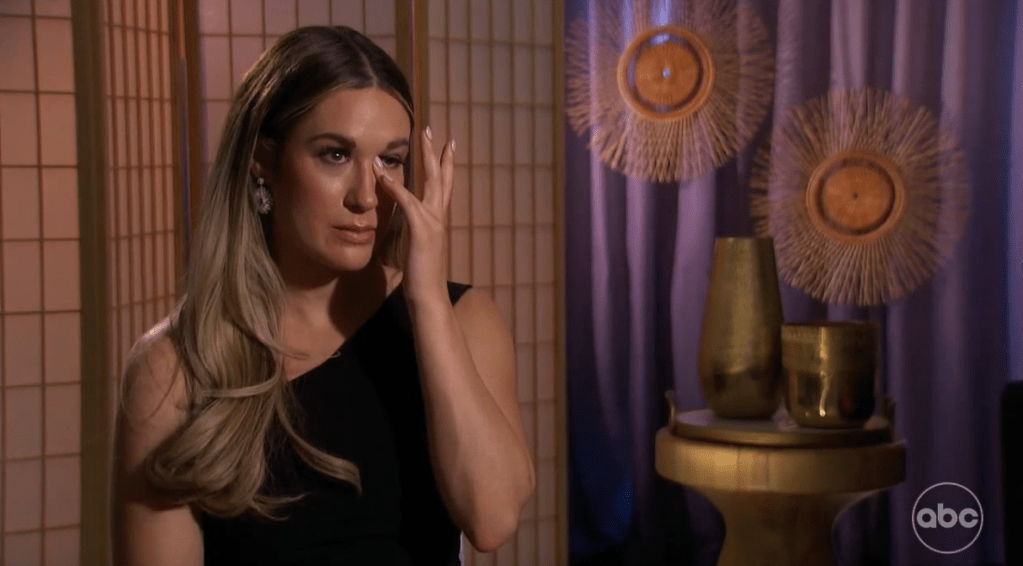 Gabby went on to offer and have roses accepted from all 9 of her men.

Rachel had her rose accepted by 6 men but was rejected by Termayne, Alec, and Meatball.

Can you imagine a greater disrespect than being rejected by a man named Meatball?

Rachel was humiliated, but in the end, she and Gabby were left with their final reverse harems.

Rachel has (including the two men who received her date roses) Zach, Aven, Tino, Logan, Tyler, Ethan, Jordan, and Hayden.

Wait, what’s that? Rachel let Meatball come crawling back like two-day-old leftovers so he also joined her final 9.

Thanks, I hate it.

Next week, Rachel and Gabby take this joke of a season to Paris where they’re bound to be humiliated in some new and horrifying way only this time in front of the Eiffel Tower or something.

The Cool Table@thecool_table
1.0K Following 1.0K Followers
RT @meg_eh: About 3/4 of the way through this and it is resonating hard. It’s accurately described with how I’ve felt growing out of faith…
2 days ago
1
@meg_eh Thank you, Megan. We’re so glad it’s resonating. ❤️
2 days ago
1
@BeaDeeH Always been how I prefer it
3 days ago
1
February New Release Books https://t.co/B5jC2dDJhV
3 days ago
3
@hannaearnest I love love loved this book and am talking it up to everyone. Looking forward to the end of the Harpe… https://t.co/lKeIX6a820
3 days ago
2
Archives
Current Events, Entertainment, Fashion, Hulu