Last week on The Bachelorette(s) our dismayed duo, Gabby and Rachel, had their confidence destroyed by the men who are supposed to be their potential soulmates. This week they’re taking them on an international cruise to France.

Because if you’re going to date a man named Meatball, who just dumped you for your friend and then came crawling back for a second chance, you should definitely do so in France.

Drama Never Sleeps in the Mansion

It’s a new morning in the Bachelor Mansion and the men are still reeling from the events of the night before. There are now only 18 men remaining in the cast that was further divided in half between Gabby and Rachel in a schoolyard pick. 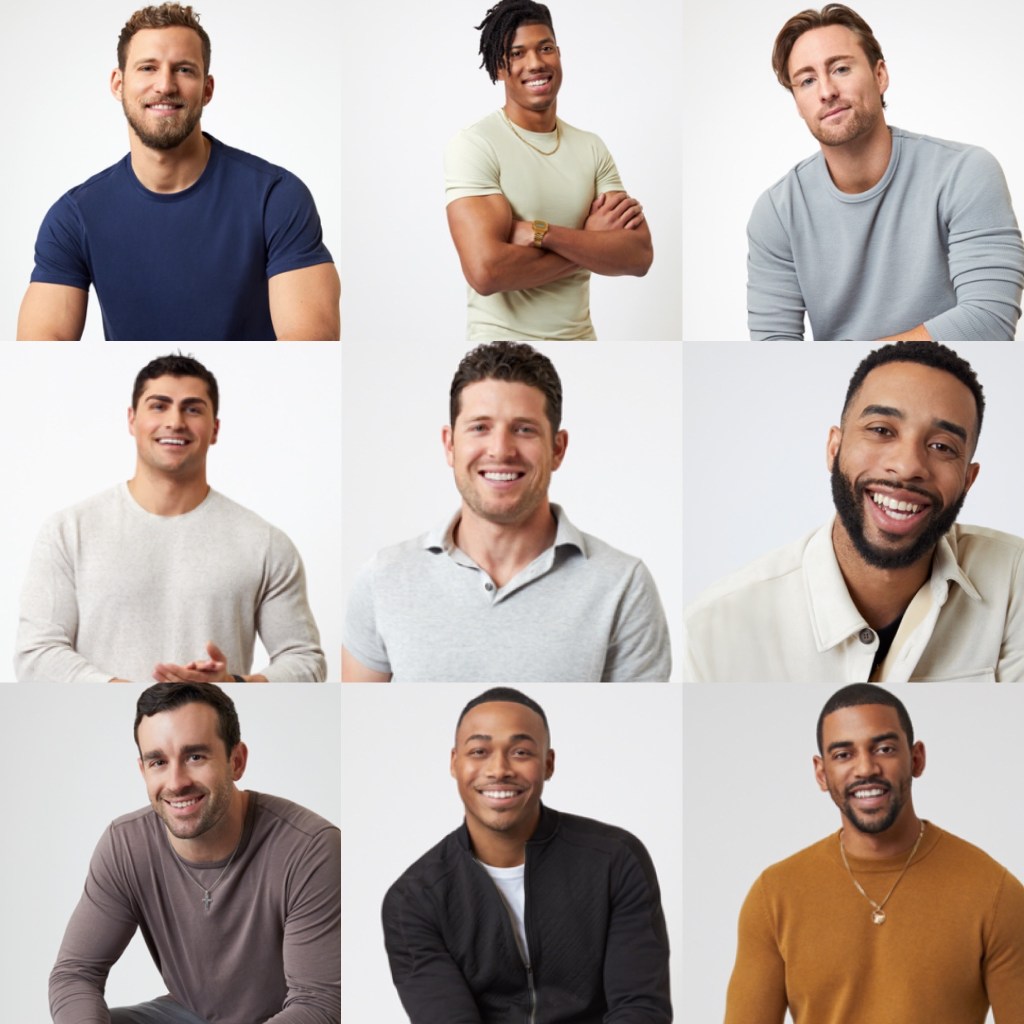 As you can see from their cast bios, Gabby’s men are decidedly diverse than Rachel’s. However, Rachel’s men bring the drama.

And it wouldn’t be The Bachelorette without the drama.

If you can remember, at the previous nights cocktail party, Hayden pissed off Gabby when he called her “rough around the edges.” It wasn’t great, but the next morning he doubled down by talking badly about both women. 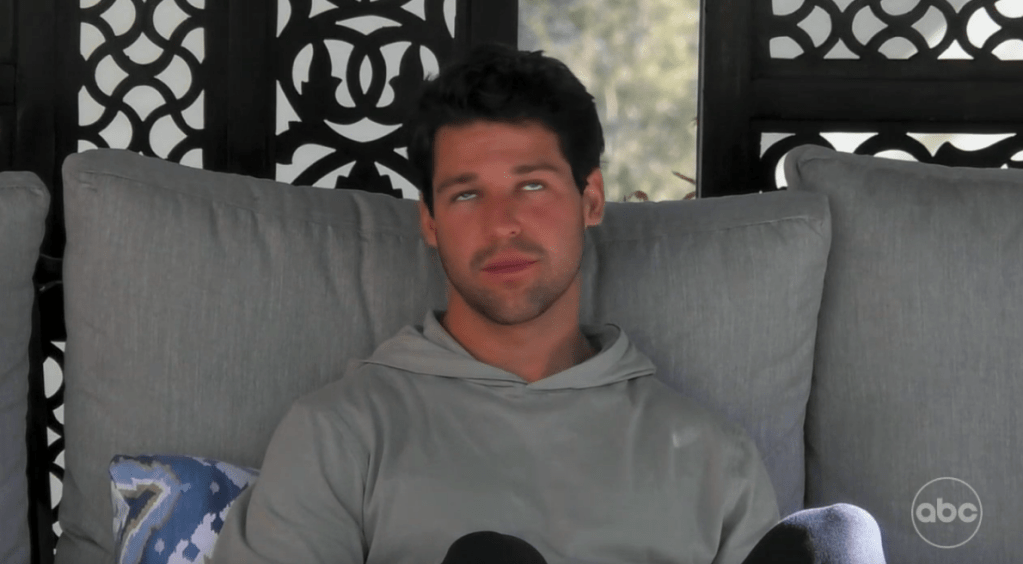 Keep that in the back of your mind, because good ol’ country boy Hayden may have a mouth on him but, luckily for us, Meatball was feeling extra saucy. That info is going to make its way back to Gabby and Rachel in no time.

Rachel’s first impression rose recipient, Tino, and Gabby’s Michael Bublé lookalike suitor, Jason, are flying to Paris to meet up for dates with them. Everyone else is headed to a cruise ship in Le Havre. 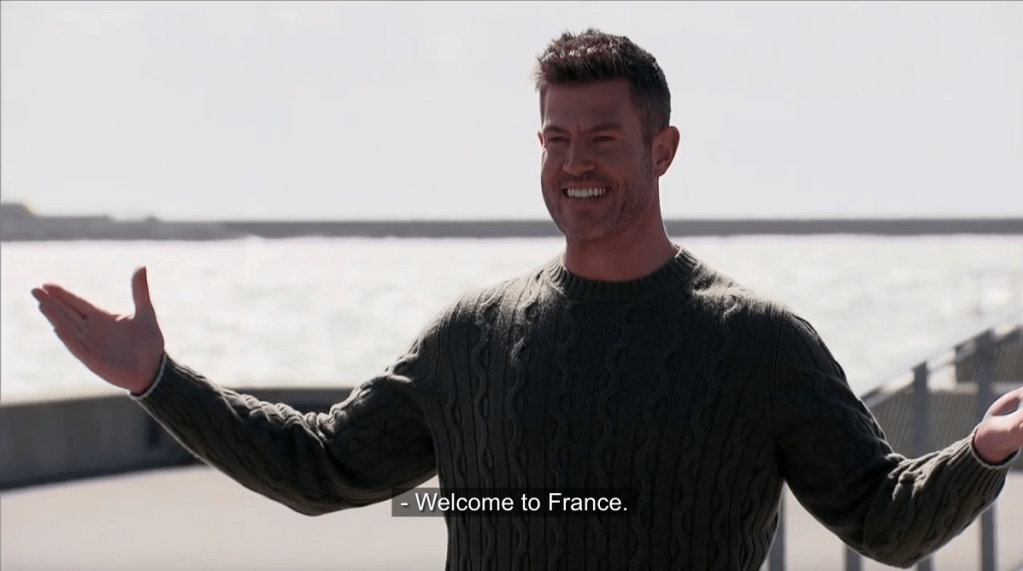 Right about then is when we learned that Jesse Palmer speaks fluent french.

Anyway, it turns out that from now on the two groups of men will live completely separately aboard the Virgin Voyages Valiant Lady cruise ship. Rachel’s men are henceforth referred to as “The Dock House” while Gabby’s are “The Social Club.”

If their core audience was about 40 years older, Bachelor Nation would be living its best Love Boat life. 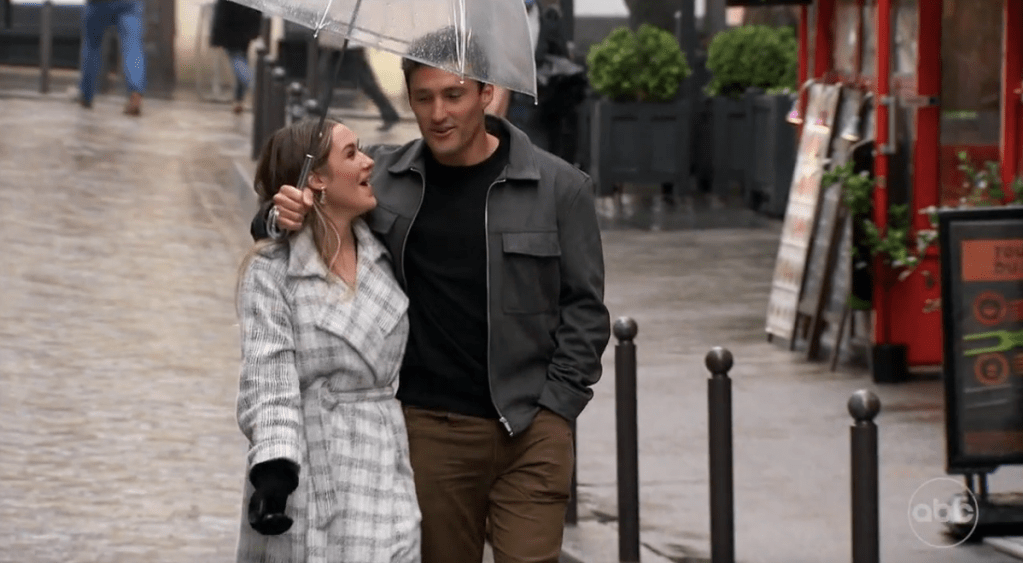 While Rachel’s dick house got comfortable in their, uh, rooms? berths? I don’t understand cruise ships, Tino was out wooing their girl.

Rachel and the 28-year-old general contractor from California spent the day making crepes, kissing in the rain, and being super into each other. 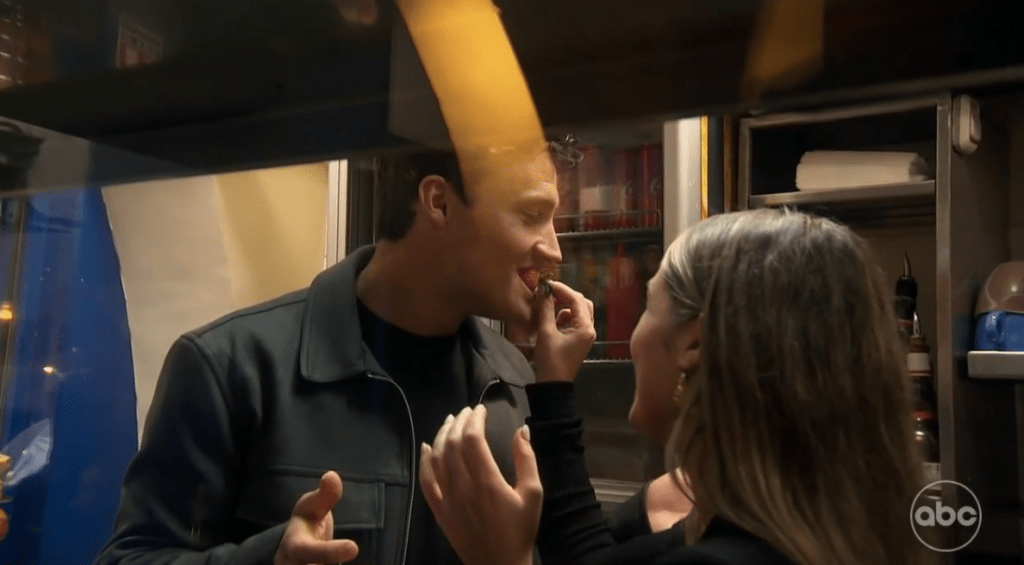 That night at a romantic dinner in the nave of a cathedral their romance continued to progress. This time with a conversation about their shared desire to marry and have children that would have made any priest proud.

I mean, probably a better priest than the one that agreed to host The Bachelorette in his church, but you know what I mean. 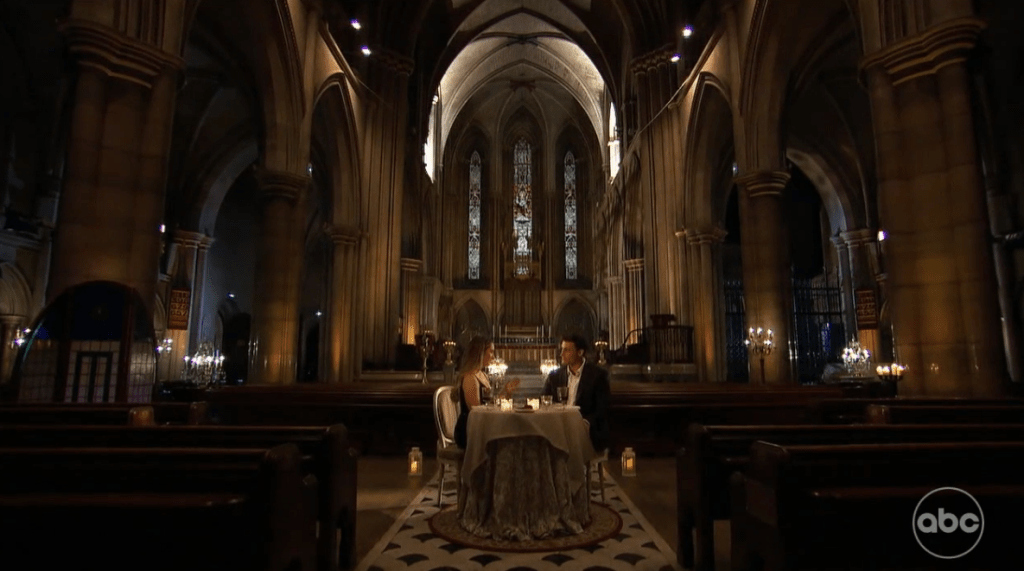 Tino told Rachel that he intended to be there until the end with her and she told him that she likes him so much that it scares her. She gave him the date rose and they kissed on a bridge with the Eiffel Tower peaking out behind them.

I smell a contender. That’s probably because all of her other options suck, but still, things are looking good for Tino. 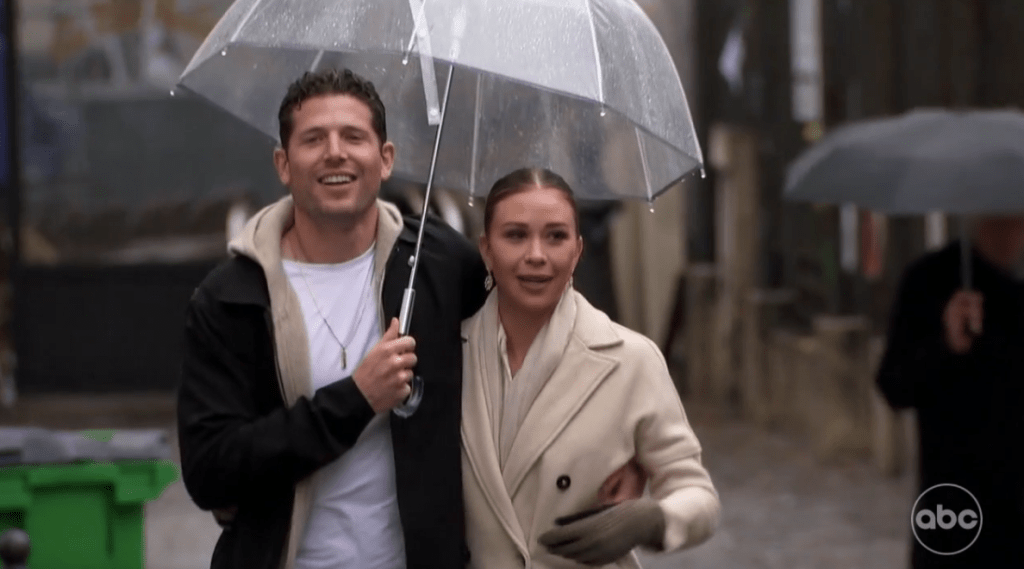 Meanwhile, Gabby and Jason (30, Investment Banker) had a concurrent Parisian date in the rain except they traded out the crepes for a beret fitting.

As Gabby’s dates tend to go, this one was full of giggles and silly humor, but at dinner that night they both went deeper. 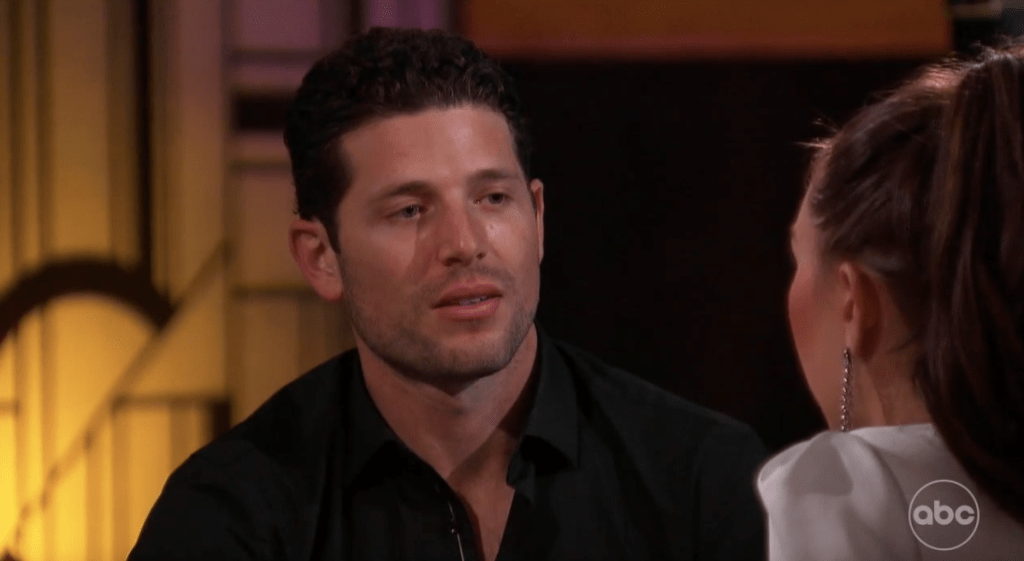 Jason told Gabby that he had some childhood trauma related to playing tennis or something as a kid but then he mentioned having been to therapy to work through it.

In this house, we love a man who has been to therapy.

Unfortunately, we were once again forced to witness Gabby retell the traumatic experience of not being loved by her mother, but this time it led to a deeper emotional connection. 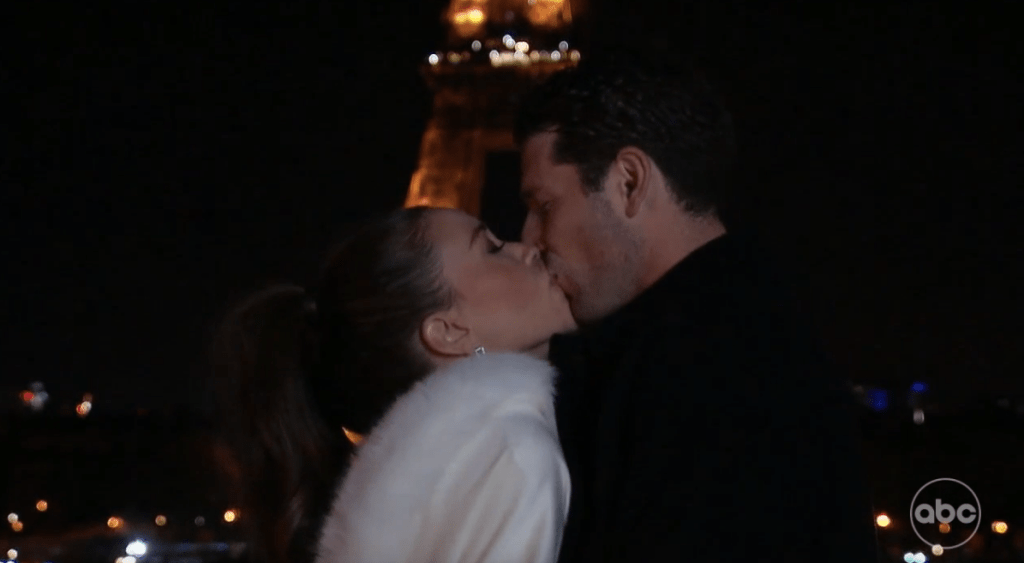 Jason has absolutely no personality, but he’s stable, mature, and super hot so he got the date rose and they kissed under the Eiffel Tower.

The next day, The Social Club was released from the brig for Gabby’s group date which involved eight gorgeous men boxing shirtless for the chance at a one-on-one conversation with her.

I’d like to think I’m more evolved than to enjoy watching that, but it turns out that I’m not. 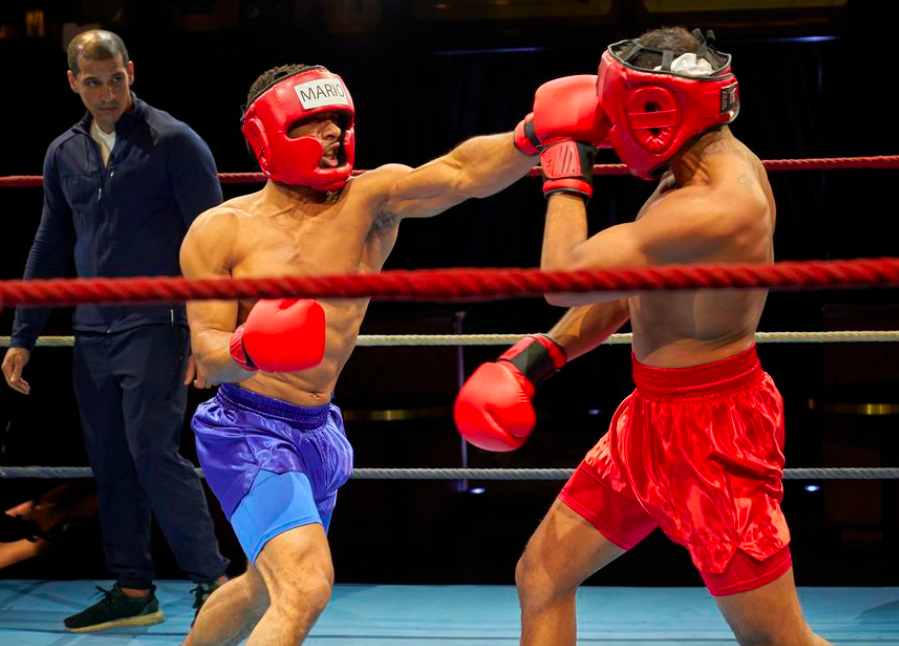 Spencer (27, Venture Capitalist) won the tournament and the date rose after he spent his time talking about his military service (she comes from a military family) and kissing Gabby.

Cool, cool, but the real story here was that Rachel’s Dick House got to watch the fights so they showed up to the date and proceeded to completely ignore her. So now she’s crying about feeling unwanted again. 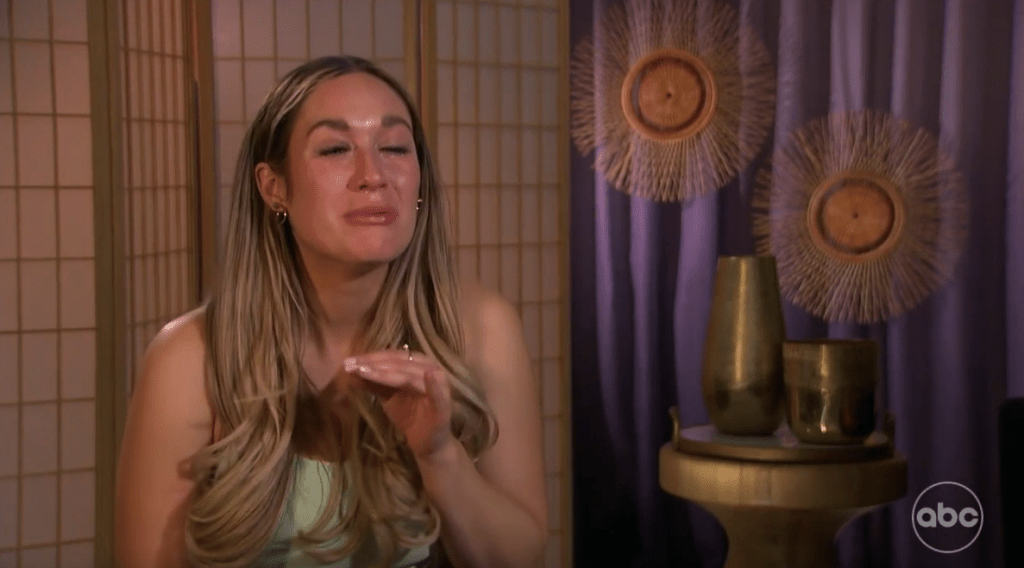 I want off of this ride.

The last time the men from Rachel’s dick house saw her she was berating them for not making her feel special. So, when they realized they’d be practicing the art of seduction for their activity, they went all in.

No, like they french kissed their own hands, recited love notes to her, and, uh, let her smell their armpits. 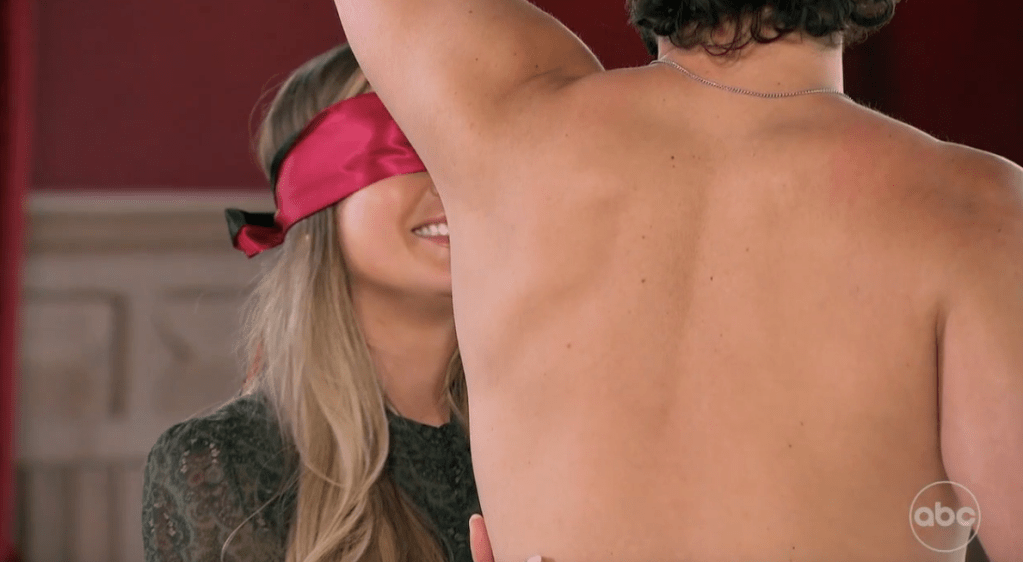 Tyler (25, Small Business Owner) got the date rose and extra time with her that night after writing a compelling love poem that rhymed “again” with “again.”

I can’t think of any date I’d enjoy less but, apparently, it worked because Rachel is finally feeling wanted again. 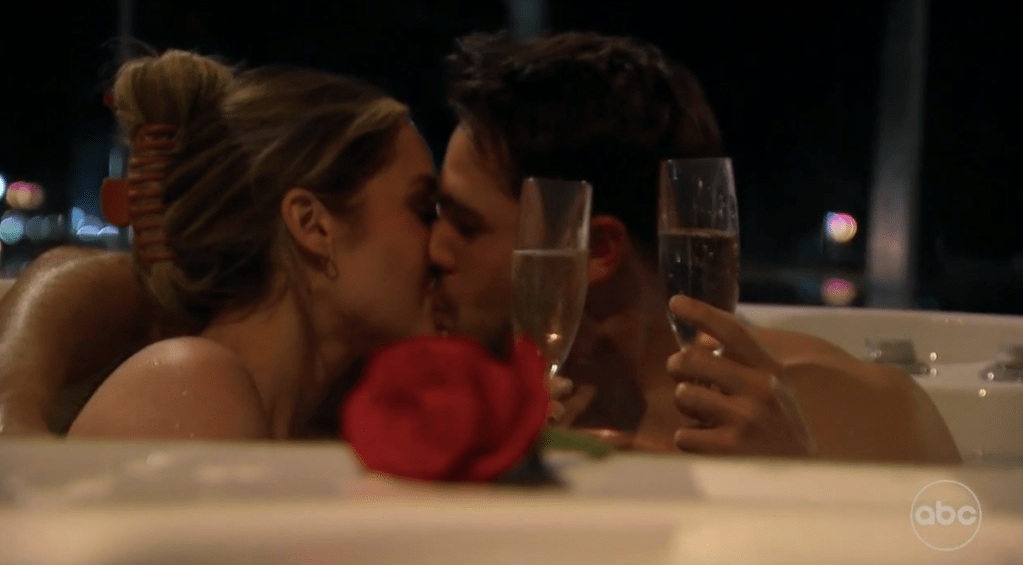 Hold onto that feeling, girlfriend, it’s as fleeting as a Bachelor engagement.

Things Get Worse for Rachel at the Cocktail Party

Before Rachel could sniff any more armpits, it was time for the cocktail party where Gabby continued to ride the high of a successful week. 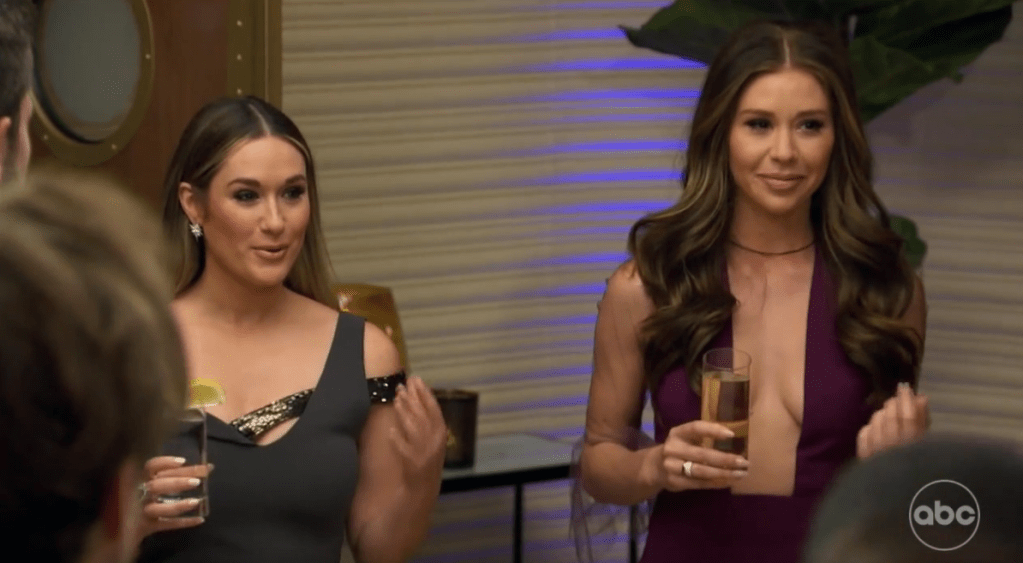 Not so much for Rachel who had to call on her every acting ability to feign emotion while paging through a photobook about Hayden’s dying dog.

Speaking for feigned emotion, remember that conversation Meatball had with Hayden that was definitely going to get brought back up again? This is the moment. 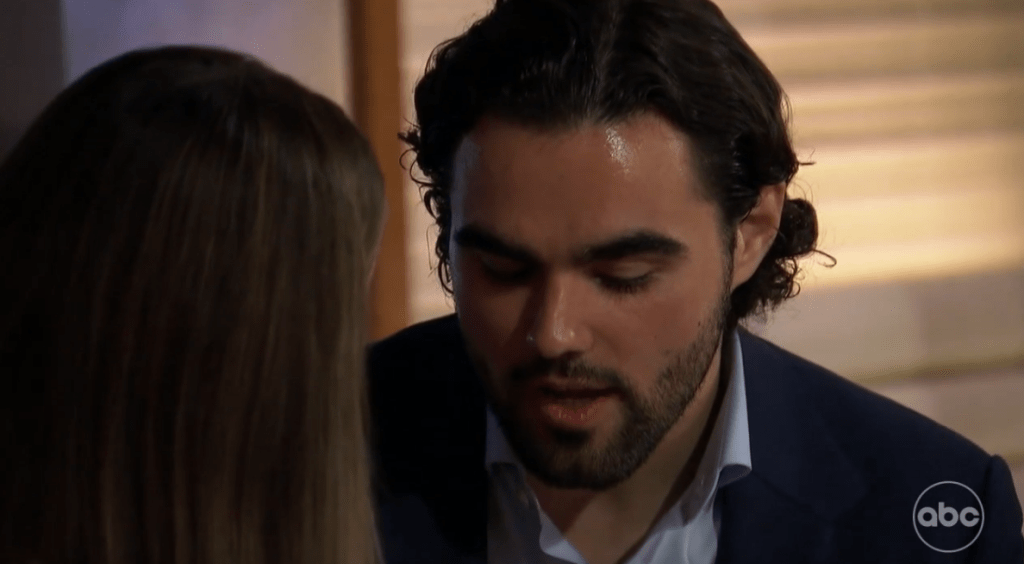 Meatball told Rachel that Hayden made a vulgar comment about her breasts in comparison to his ex’s and said “I don’t trust these bitches” regarding Rachel and Gabby. 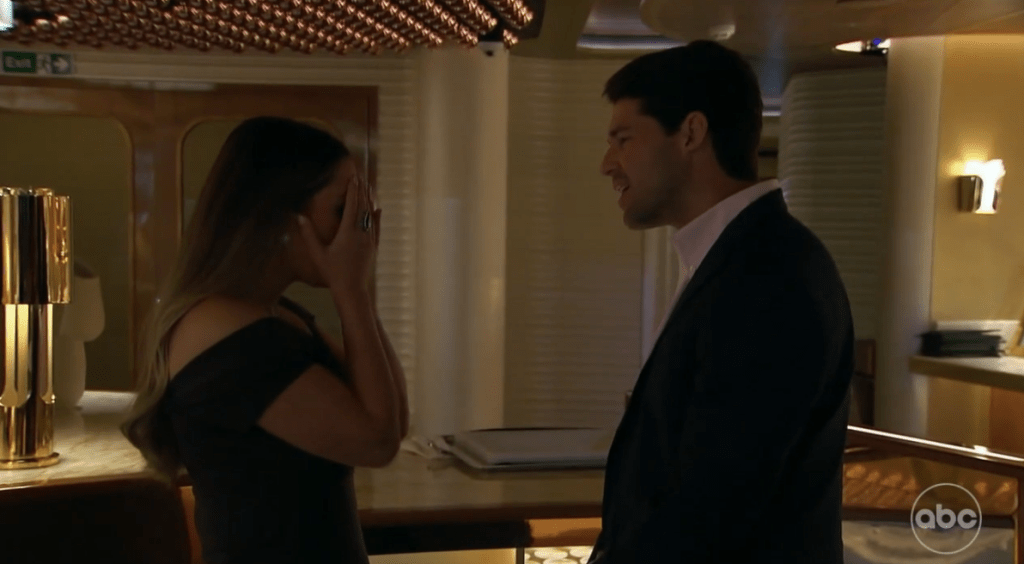 Rachel confronted Hayden about it. He lied. She sent him home to his dying dog and then laid on a couch crying. Again.

It was time for the rose ceremony, but did I forget to mention that Logan (26, videographer), who is one of Rachel’s Dick House men, decided halfway through this episode that he actually wants to date Gabby?

Oops, hate when that happens.

No, I actually hate when that happens. 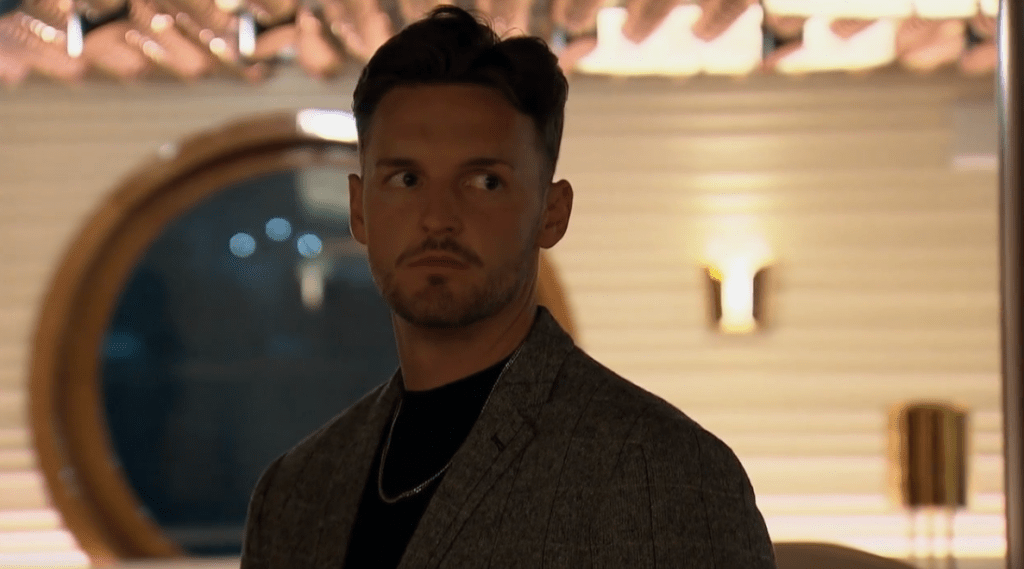 Rachel and Gabby began handing out their roses without a care in the world other than remembering names and looking hot. Meanwhile, Logan was standing up there with absolutely zero attraction to Rachel and every intention of shooting his shot with Gabby at the first opportunity.

Tell me who thought two Bachelorettes was a good idea, again? 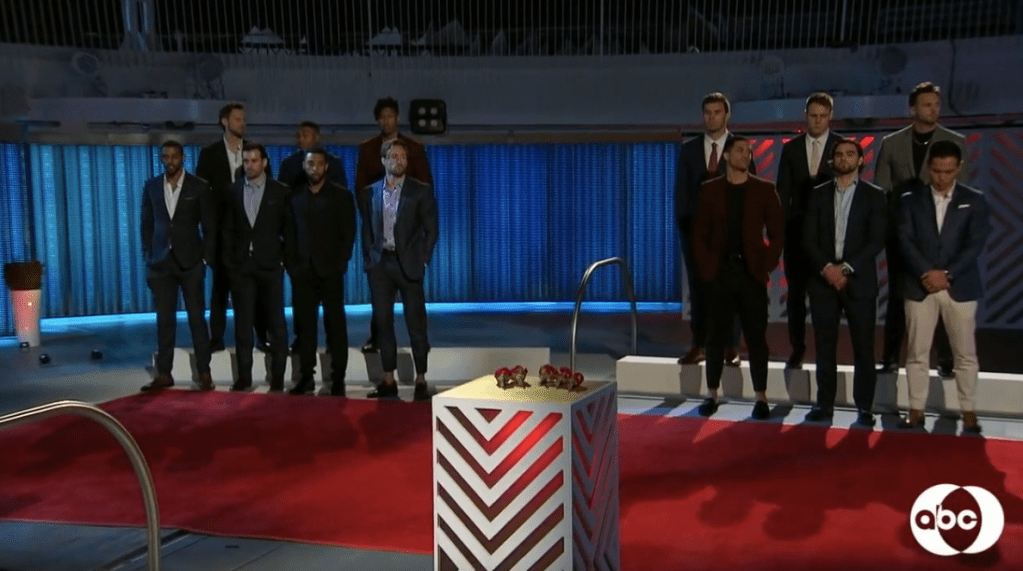 Logan said, “She gave me a rose and I feel like the bad guy.” Which, yeah, because you are. 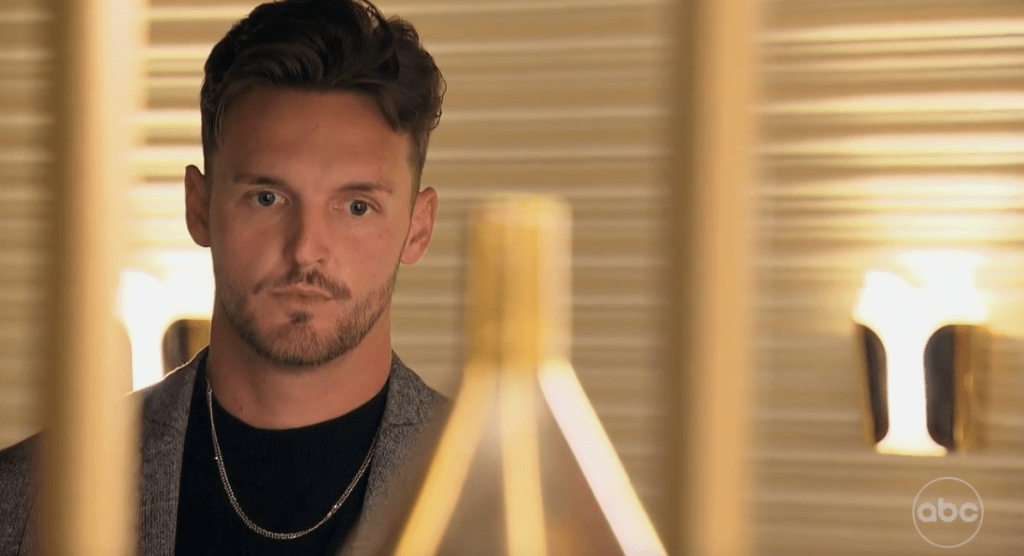 But he also said that “fortune favors the bold.” Which, also yeah, but I don’t think the originators of that saying considered lying to one woman in order to date their friend when they came up with it.

Give me an end to this competition between the women for affection or give me death.

Next week the love boat is headed to Belgium where I’m certain Logan will be cemented in villain history. Also, I wrote this post at 1 am after spending 15 hours in Disneyland with five children so forgive any errors. I’m tired.

The Cool Table Has a Podcast Now!@thecool_table
1.0K Following 996 Followers
RT @BlessAmysHeart: Outlander fans know. That’s where Jocasta kept the French gold.
5 hours ago
1
Things Keep Getting Worse for Rachel and Gabby on #TheBachelorette https://t.co/o0rYpGvgci
6 days ago
1 2
@jamiesrule @aliciafromashes @BeaDeeH Camera make up up from telephoto lens /= what it will look like on screen. I… https://t.co/MLwcmdpHht
1 week ago
3
@jamiesrule The fact that I didn’t know WHICH show you were talking about at first …
1 week ago
2
RT @BlessAmysHeart: I want her to laugh, love, and ditch the brown shoes. https://t.co/NmvXNDcVZ9
2 weeks ago
1
Archives
Entertainment, The Bachelor, TV