Ahoy potential soulmateys! Rachel and Gabby are back for yet another week of travel on the cruise ship they commandeered with Jesse Palmer’s bilingual mouth, and their 14 remaining boyfriends.

Every time I think about taking a cruise trip I remember that rampant case of norovirus that tore through one a few years ago and stop myself; but it turns out that a Bachelor cruise is worse.

By the standard Bachelor formula, Rachel should have started out the episode on a group date in Bruges, Belgium. However, when Logan (26, Videographer) saw his name on the group date card, he knew it was finally time to come clean.

He doesn’t actually like Rachel. In fact, despite accepting Rachel’s roses weeks after week (including one the night before), and joining her dick house, Logan has suddenly come to the realization that…oops…he actually likes Gabby. 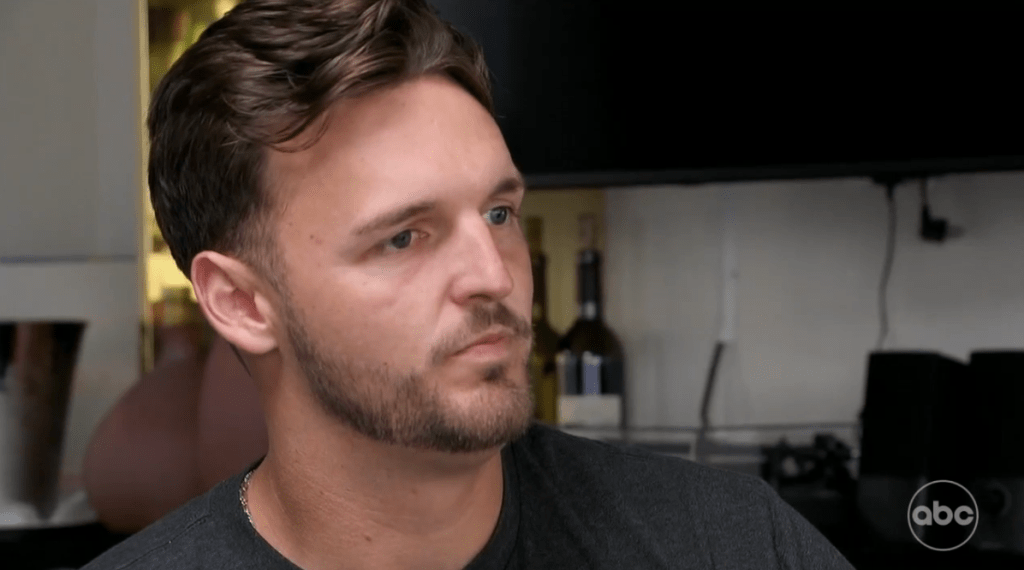 To his credit, Logan went directly to Rachel and told her the news before he had the chance to ruin another of her group dates. And, also to his credit, he handled it maturely and respectfully given the topic.

I mean, sure, the topic was that he was taking the spot of other men when he wanted to bang her friend the whole time, but still, he handled it better than I expected. 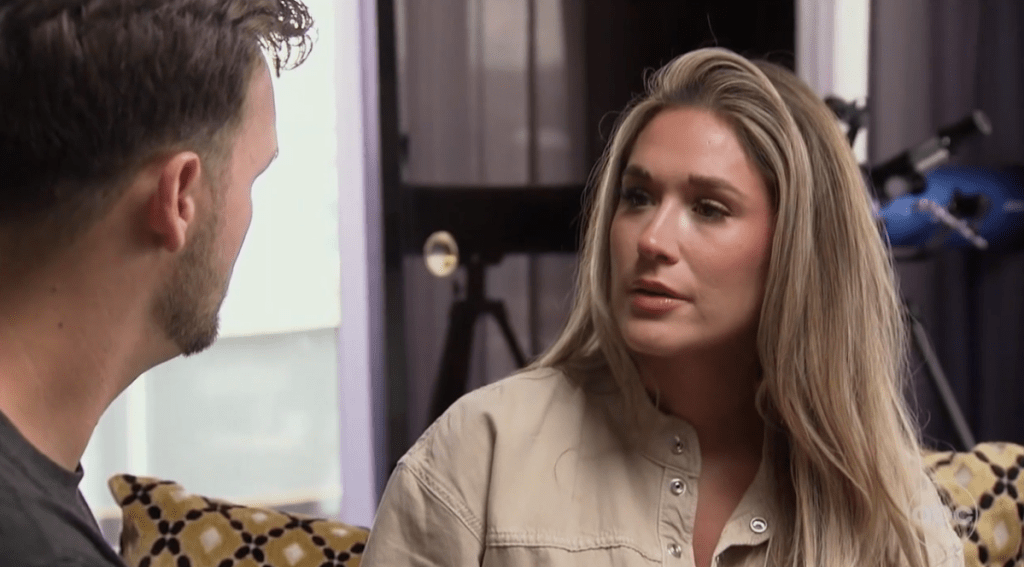 For her part, Rachel mirrored his energy and was cordial if annoyed, but later she began to spiral again about all of the rejection she has faced thus far this season.

It doesn’t help that Logan had no intention of leaving the show (he needs to shoot his shot with Gabby first) so she didn’t even get the dignity of throwing him overboard or however people are leaving the cruise ship these days.

Once again Rachel found herself crying in her room over another mediocre aspiring influencer; but this time, they sent in the big guns to comfort her. Jesse Palmer is finally earning his paycheck.

He commiserated with her about how impossible the job of a Bachelor (which he once was) or Bachelorette is while encouraging her to not expect perfection from herself. 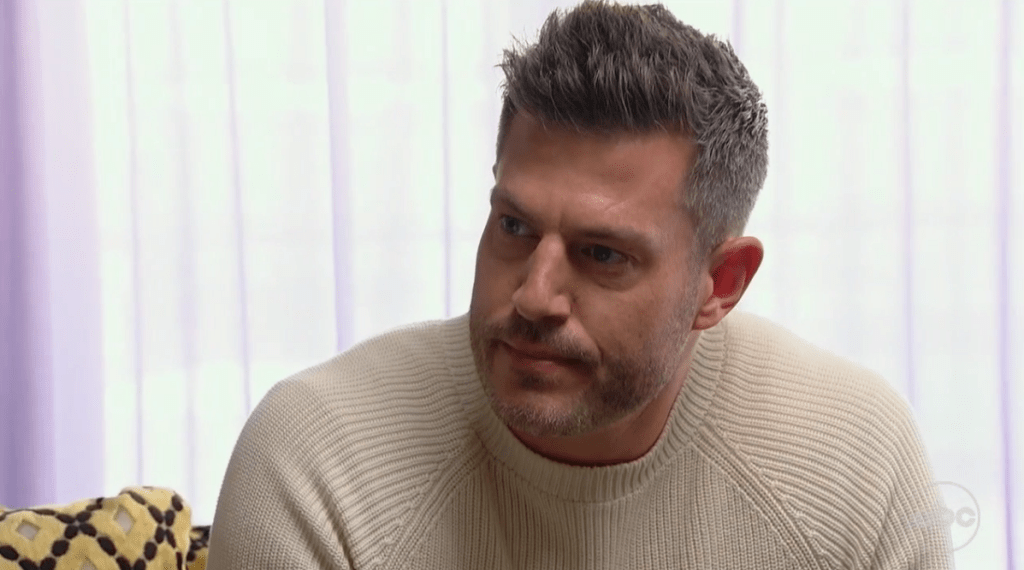 It was nice, but all he really needed to say was that Rachel only needs one perfect match and since Tino is still on this season she’ll be fine.

Then Jesse left to tell the men who were supposed to be on Rachel’s group date that they could stop watching those random men wrestle in chocolate. The day portion of their date was canceled.

Now that Rachel knew Logan didn’t like her, there was only one thing left for him to do. 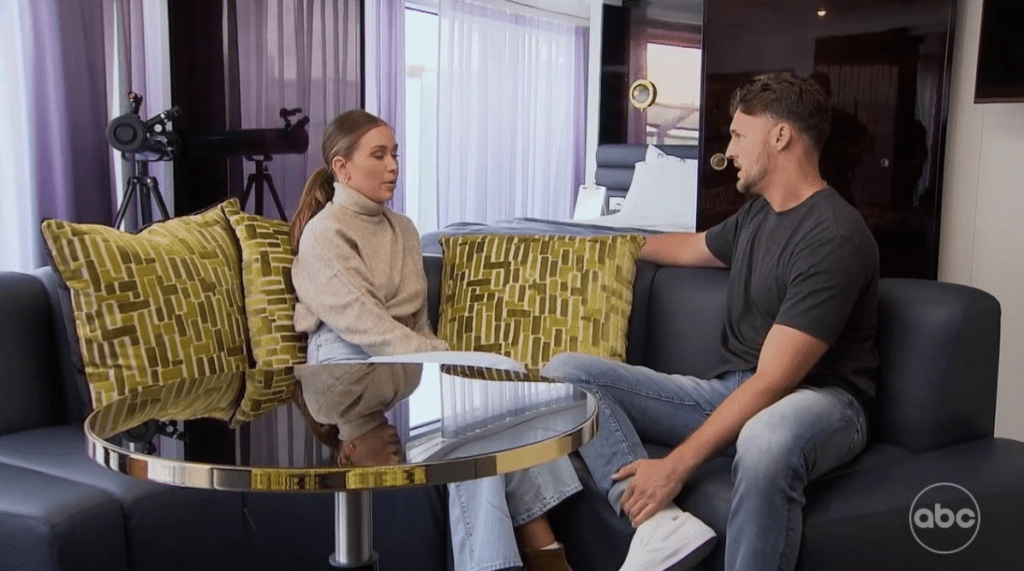 He knocked on Gabby’s door, sat with her, and explained everything that had happened. To be fair, he is a very convincing and sincere speaker so I can’t blame Gabby for listening so intently.

Gabby told him that he was the only man from the larger group who overlapped on their list of attractions but that she stepped back when Rachel seemed more into him.

Basically, it’s not a no for Logan, but she needs to check in with her bestie first to make sure she’s okay sharing sloppy seconds.

Sloppy Seconds are on the Menu 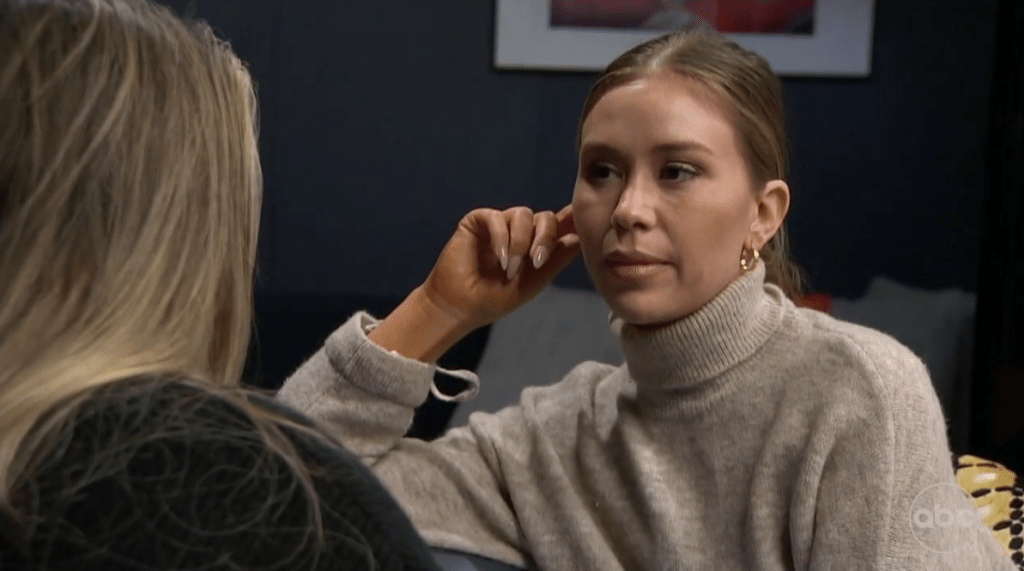 Gabby left her conversation and went immediately to Rachel to ask what was up like any good girlfriend would.

We all know Rachel never actually cared about Logan, other than how it affected her ego, so she told Gabby that she will support her no matter what she chooses even though she thinks Logan will end up hurting her.

There is no chance this ends well. 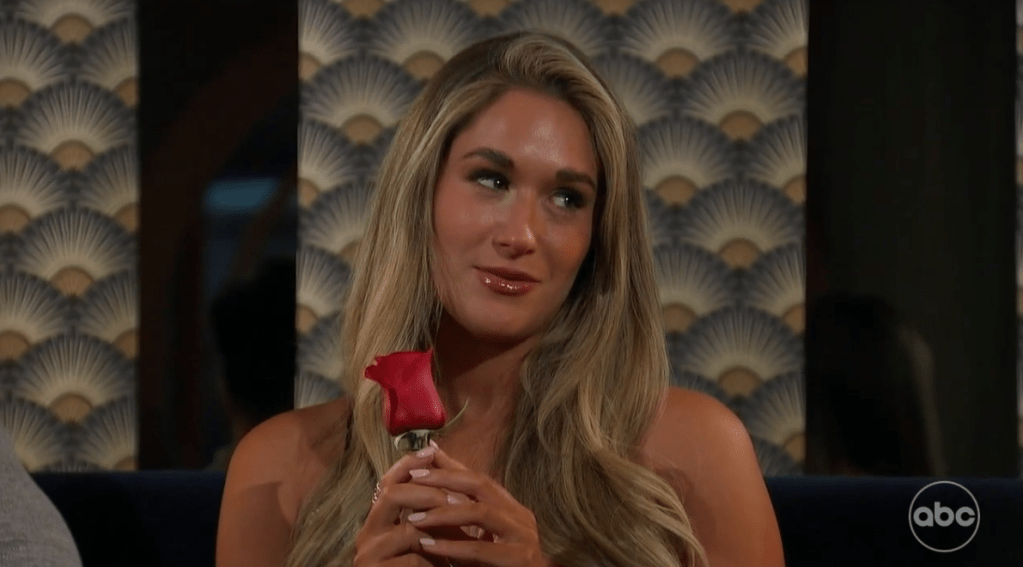 That night, Tino, Zach, Ethan, Meatball, and Tyler showed up for the discount version of their group date with Rachel.

She opened the night with an apology for canceling on them and a renewed promise to give them one hundred percent of her attention.

From there they each had a chance to talk to Rachel, but the best connection continues to be with Tino who received the date rose. 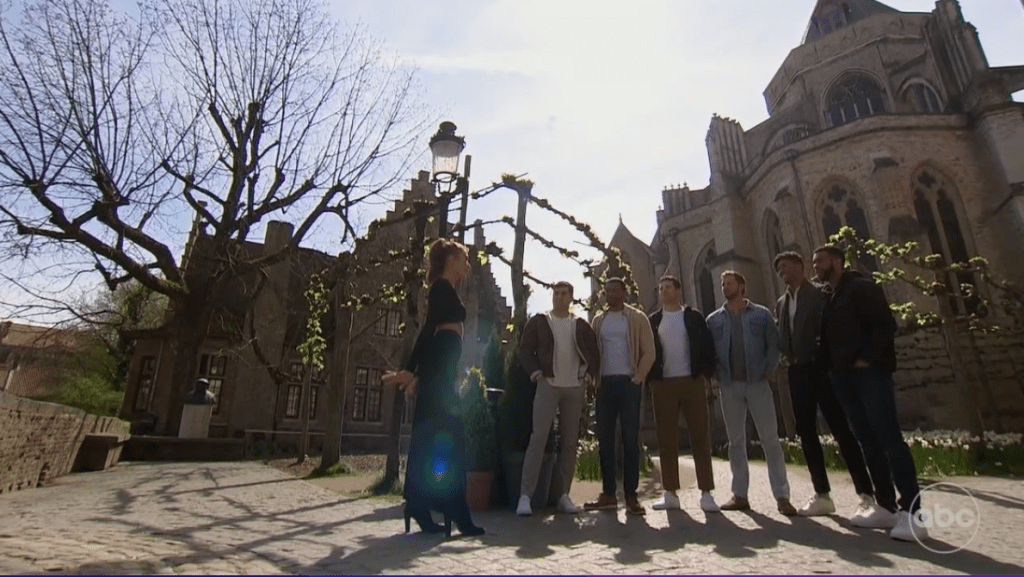 Unlike, Rachel’s men, Gabby’s actually got a break from the cruise ship with a day exploring Bruges. They ate waffles, took a boat ride, played soccer with some small Belgian boys, and hit each other in the face with fish.

Then Logan turned up at the after-party and announced that Gabby had invited him to join her team.

Everyone’s feathers were ruffled, but Gabby is so chill that she calmed their nerves so it was all kind of anticlimactic.

I don’t know how long the peace will last, but our man Nate got the date rose so I’m okay with how this one worked out for now.

Aven and Rachel Turn Things Around 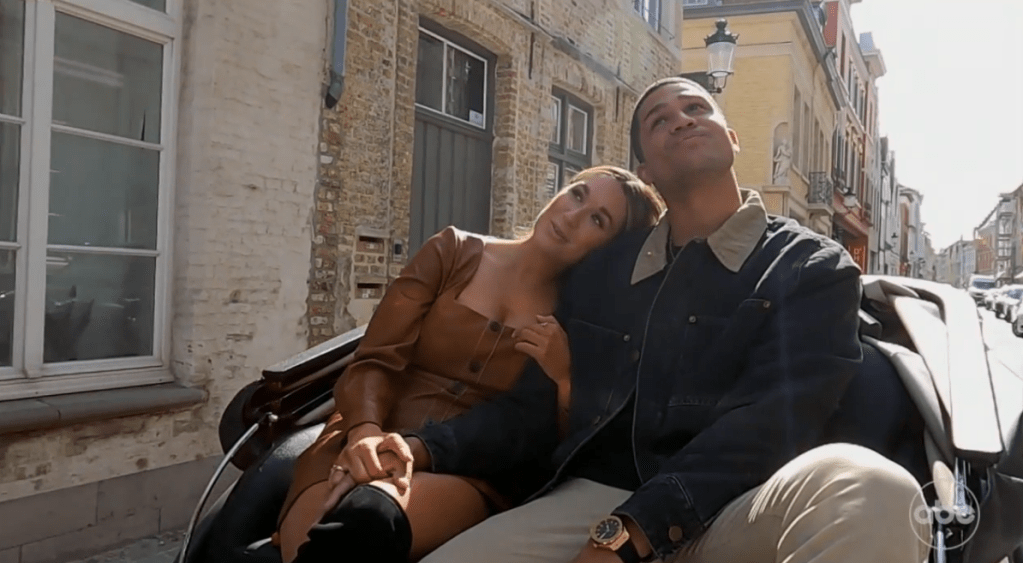 At this point in this season, we are only five weeks in and yet Rachel is down to a measly six men on her team and one of them is named Meatball.

The woman needs a win.

Which is perfect timing for Aven (28, Sales Executive) who is finally getting his much-deserved one-on-one. 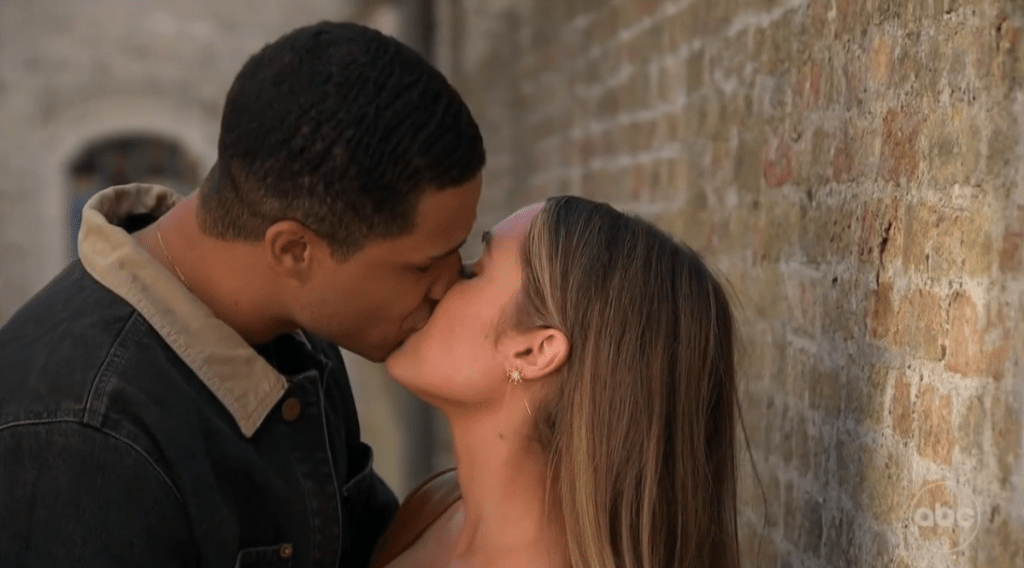 Aven and Rachel kissed on every surface the city had to offer including a brick wall, a bell tower, and in front of some elderly women who were making lace.

I’m not complaining though because these two are cute together. 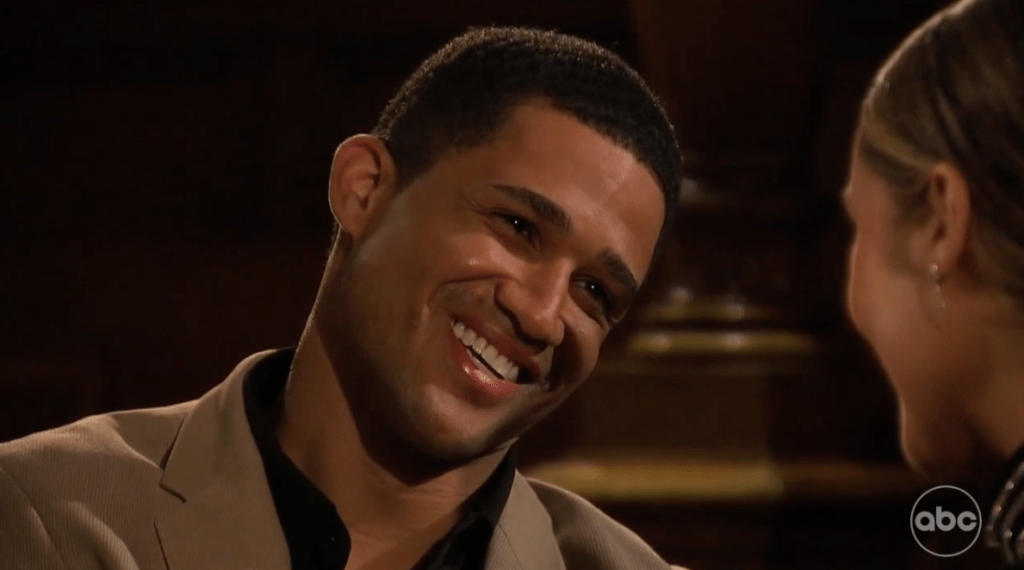 At dinner that night, Aven told Rachel some of his backstory about having divorced parents and then he gave her a bracelet his mom made him. It was so nice that Rachel gave him the date rose in exchange.

They kissed some more while fireworks exploded in the background and the music swelled. We get it, Bachelorette, he’s a contender.

Johnny and Gabby Get Tipsy 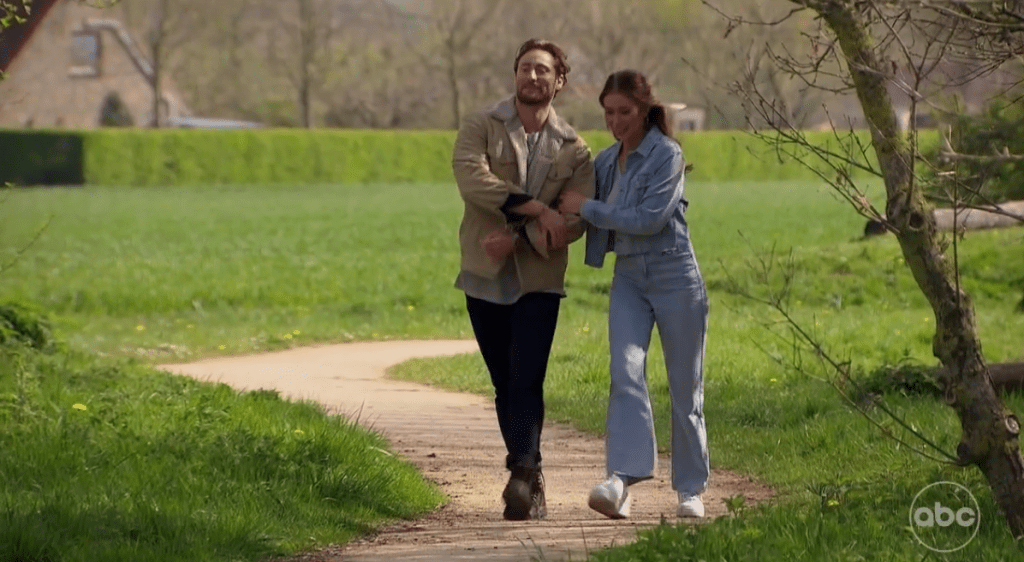 Next up on the one-on-one date train was Johnny (25, Realtor) who Gabby took to a brewery in the Belgian countryside.

Johnny has big frat boy vibes so he was like “hell yeah” and then called the centuries-old brewery a “beer farm.” 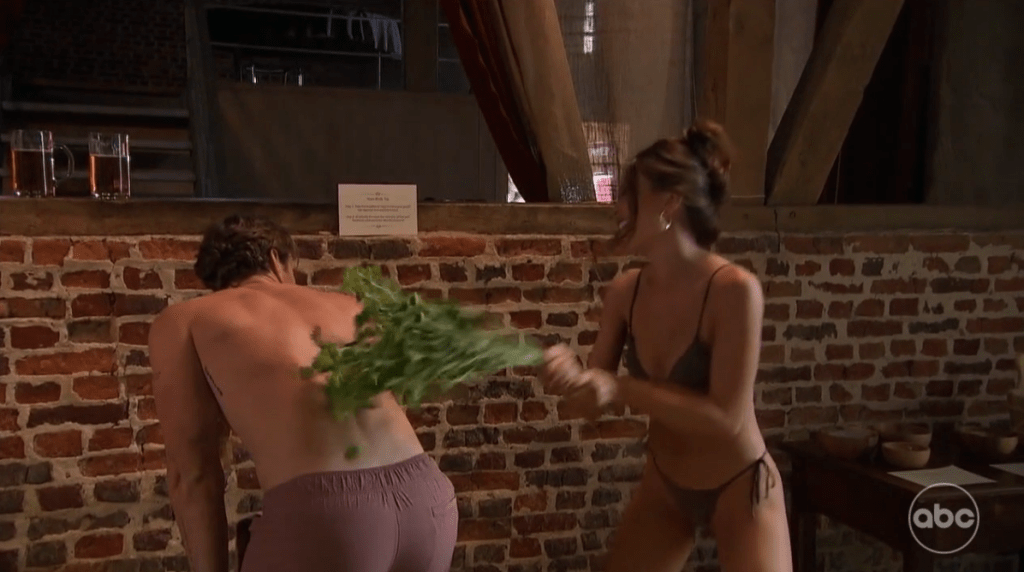 They giggled their way through a beer tasting, hit each other with hops, and took a bath in a huge tub of beer before heading to their dinner date. 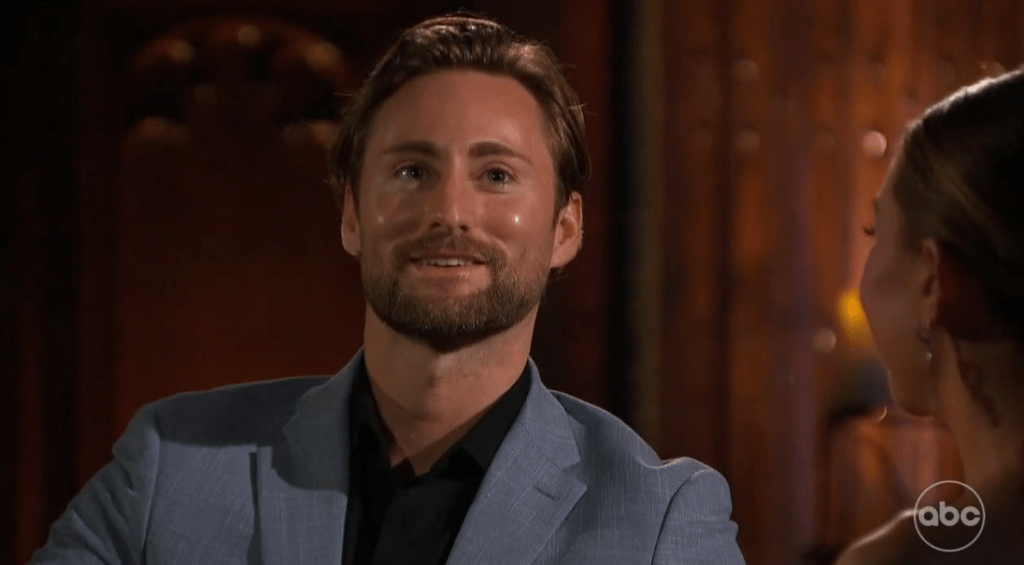 I don’t really get what Gabby sees in Johnny, but their connection continued as they transitioned into a slightly more serious conversation at dinner. In the end, Gabby said that she “loves the insides” of Johnny and he got the date rose.

Yes, there was a cocktail party, but I will not be discussing it because all they did was either look happy while talking to Rachel/Gabby or complain about Logan. We’ve been watching this same storyline for two hours, people. Let’s hurry this up.

Full speed ahead to the rose ceremony where Rachel has only 6 men and 3 roses to hand out while Gabby has 8 men and 4 roses. They’re just making this ish up as they go, I swear.

In the end, Rachel gave roses to Zach, Tyler, and Ethan who joined Tino and Aven in their weird little celebration berth. That sent Meatball rolling out of the door one last time.

As for Gabby’s roses, Nate and Johnny were soon joined by Jason, Spencer, Erich, and, you guessed it, Logan. That means her first impression rose recipient Mario, and Michael went home.

Logan smirked as he walked away from the rose ceremony while Rachel bore holes into his back with her stare. 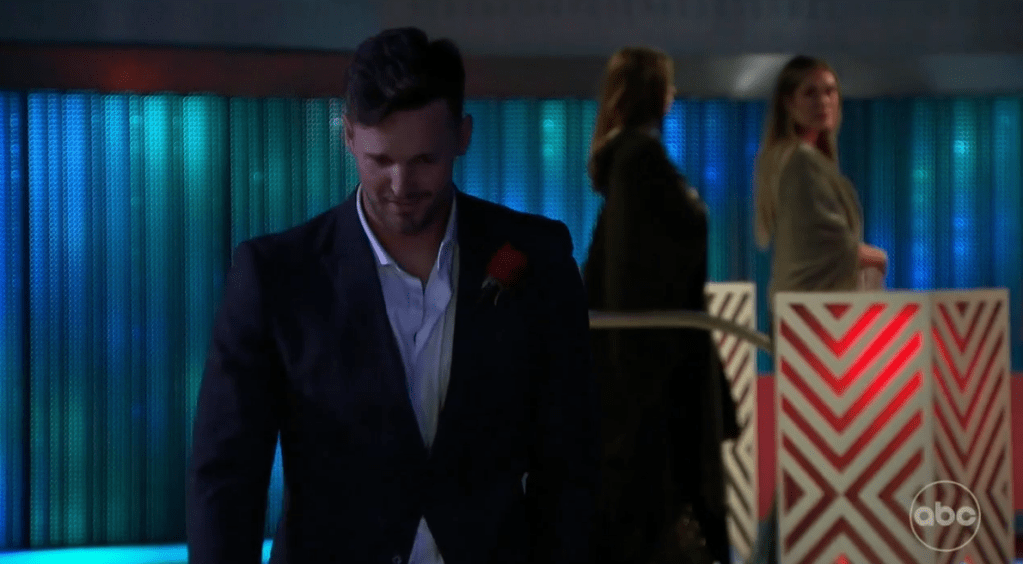 Next week, Rachel and Gabby will take their menagerie of men to Amsterdam where the trailer showed a windmill that brought some memories back that I’d rather forget.