It’s a new week and Gabby and Rachel are back for a second round of The Bachelorette(s). This time with only 29 men to fight over since they dumped the pubescent twins and the magician last week.

When we last saw them, Gabby was being hilarious, Rachel was being sincere, and the men were asking overly confident questions like, “What if they both fall in love with me?”

Time to humiliate them with a speedo pageant.

Who are these dudes? 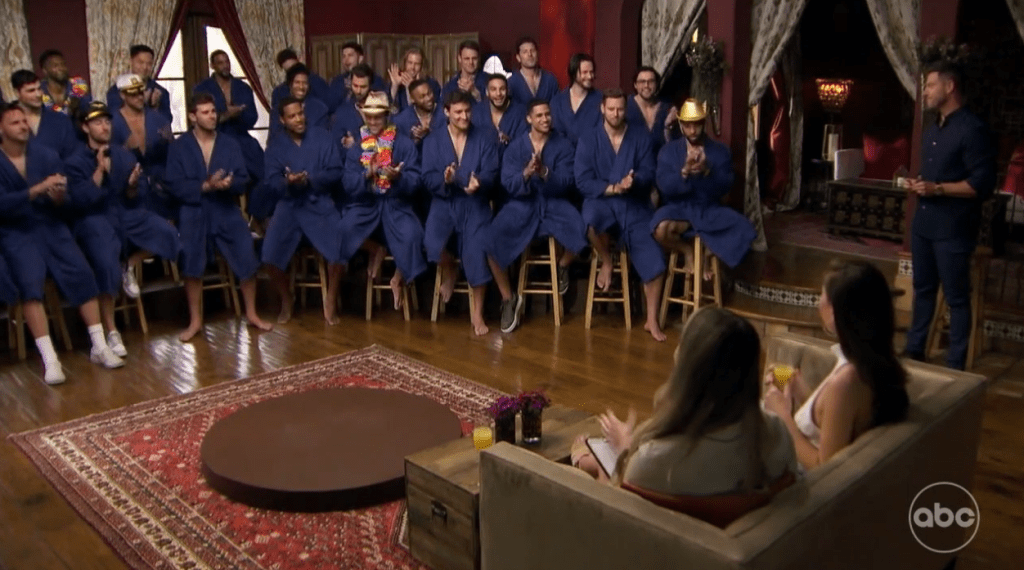 Despite spending so much time filming the first night that it was daylight when they sent the twins home, Gabby and Rachel barely got to talk to any of the men. So, clearly, they needed a quick and dirty way to get the know them while also seeing them mostly naked.

I know! They could force them to wear speedos while answering questions and performing stupid human tricks like a reverse beauty pageant. 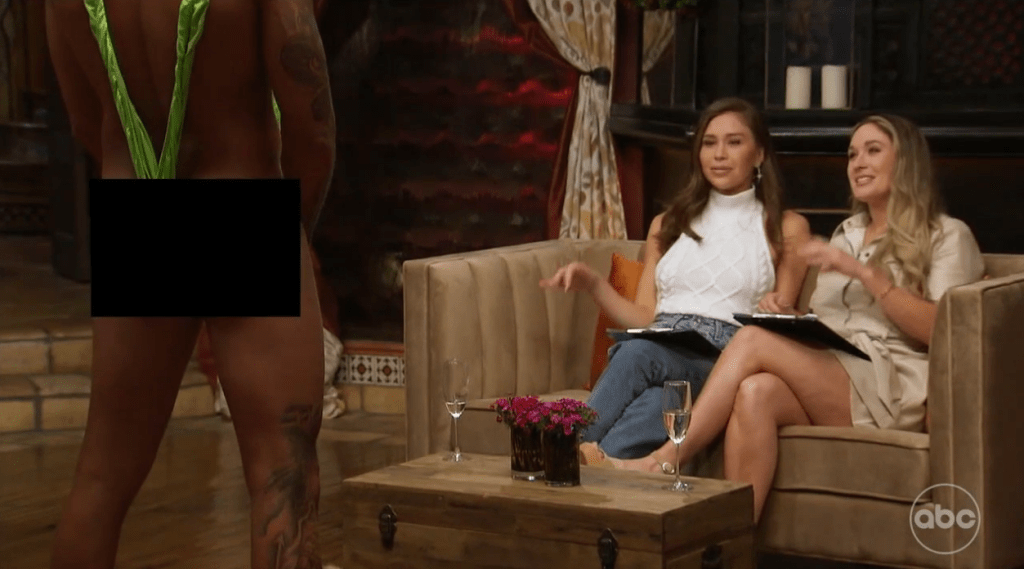 This is what the suffragettes fought for.

There were headstands, juggling, an off-key singer whose chyron was immediately changed to “tone-deaf,” one guy explaining what a fixed-rate mortgage was, and then there was Meatball who poured marina sauce all over himself.

Wasting groceries in this economy? 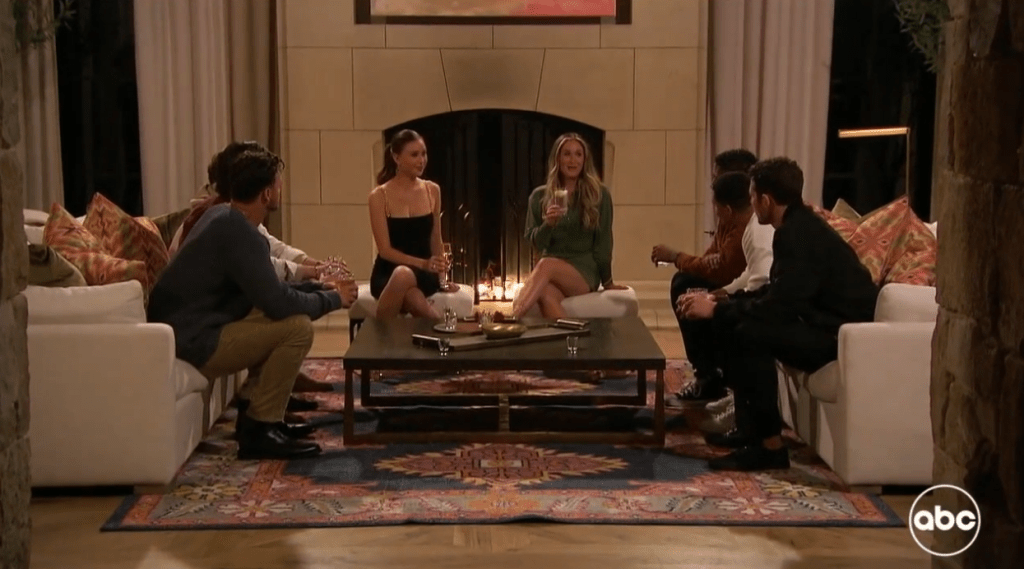 In the end, the six men (Aven, Logan, Brandon, Jason, Johnny, and Colin) who impressed Gabby and Rachel the most were invited to an after-party where they got more time to woo the women.

This time while fully dressed. 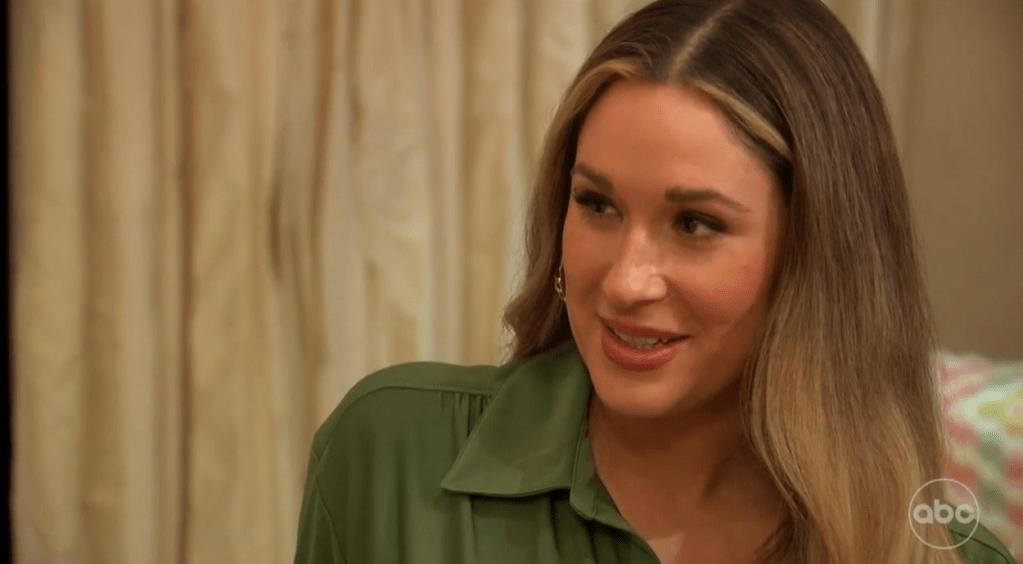 Things started off rocky when Jason respectfully told Rachel that he feels more connected to Gabby. This caused Rachel to spiral into self-doubt. She was desperate for any connection she could find as a lifeline so when charming Logan complimented her for being brave and kissed her, she decided he was it.

Meanwhile, Logan had also kissed Gabby. But, when they had their little girl talk about the night before handing out their group date roses, neither was honest with the other.

Sure, Rachel told Gabby about the kiss and that she likes Logan, but Gabby didn’t give her the whole story. Instead, they both hid the uncomfortable truth that Rachel is feeling insecure and Gabby is protecting her.

I hate this entire premise so far.

Give me drama between the men. I don’t need two hours a week of women dancing around each other’s feelings while men sit back and enjoy free alcohol and some nice dates.

In the end, Rachel gave Logan her date rose, Johnny got Gabby’s, and I got a bad taste in my mouth.

The first one-on-one date of the season went to Rachel who invited drag racer Jordan V. mostly because he told her on the first night that he was there for her.

On a related note, it turns out that a drag racer is not a drag queen who runs fast. I can’t be the only one who is disappointed by that. 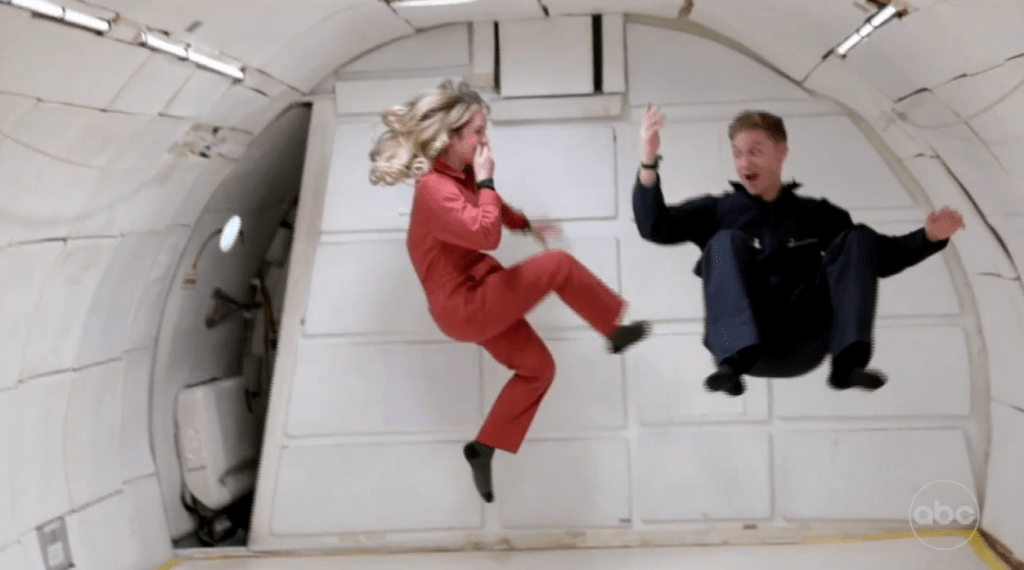 Anyway, they relived Nick Viall and Vanessa’s first date by going on a Zero-G flight which absolutely terrified Jordan V. They floated around and kissed while literally in mid-air.

This date is the only reason I’d consider going on this show. 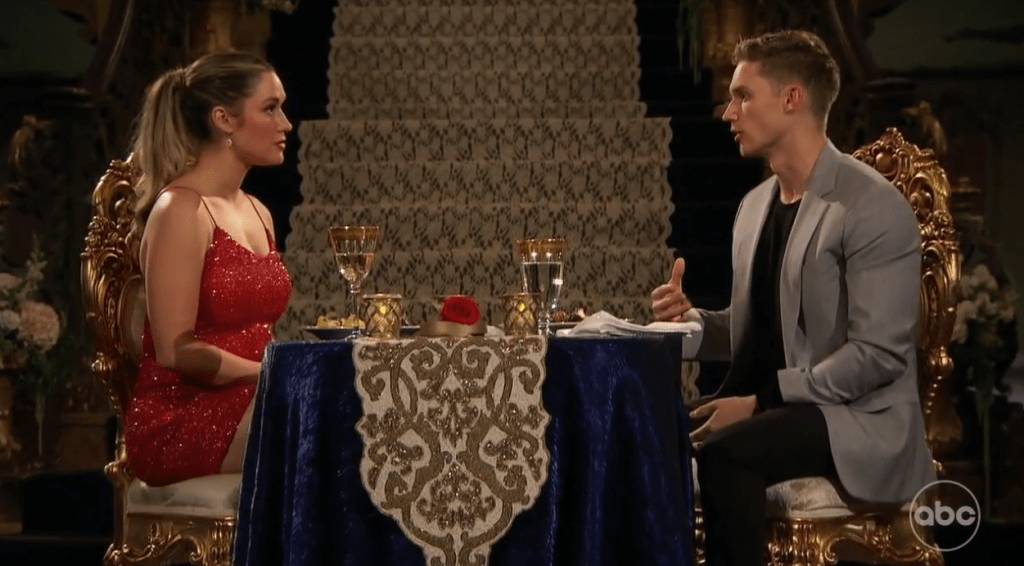 Later that night, Jordan V. shared a little bit more about shouldering the burden of his parent’s divorce, but Rachel’s mind was somewhere else. Jordan V. is perfect for her on paper, but she knew “in her gut” that he wasn’t the one.

He was sent home in the SUV of shame while musicians Ashley Cooke and Brett Young gave a private concert to an empty room. 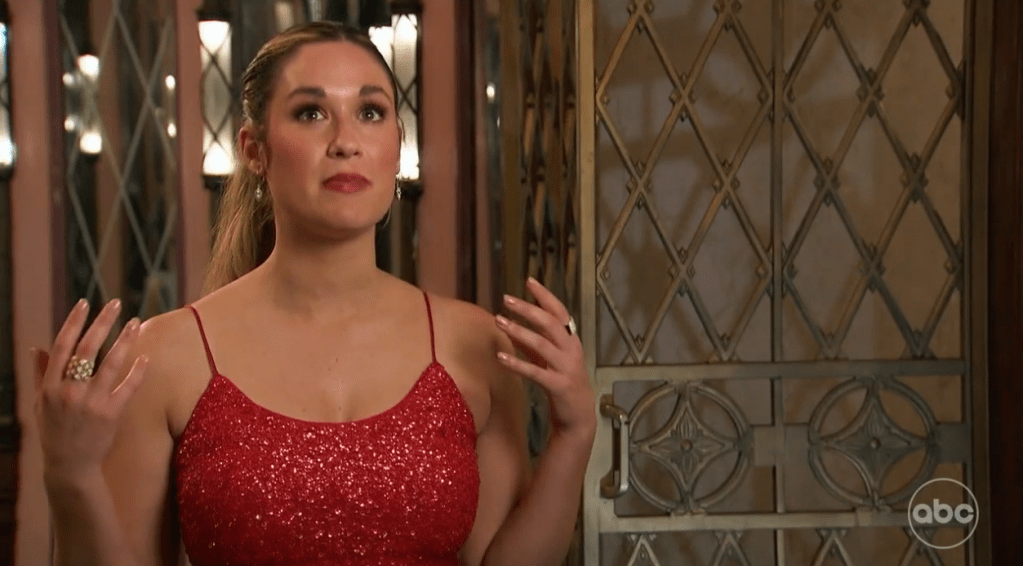 Things are not off to a winning start for Rachel who feels like a failure as a bachelorette.

Sucks to be Rachel, because Gabby is thriving.

For her first one-on-one date of the season, Gabby took Nate (33, electrical engineer) on a helicopter tour of Los Angeles. Then they landed in a random parking lot where some poor producer had slapped a hot tub together with some two-by-fours and called it a day. 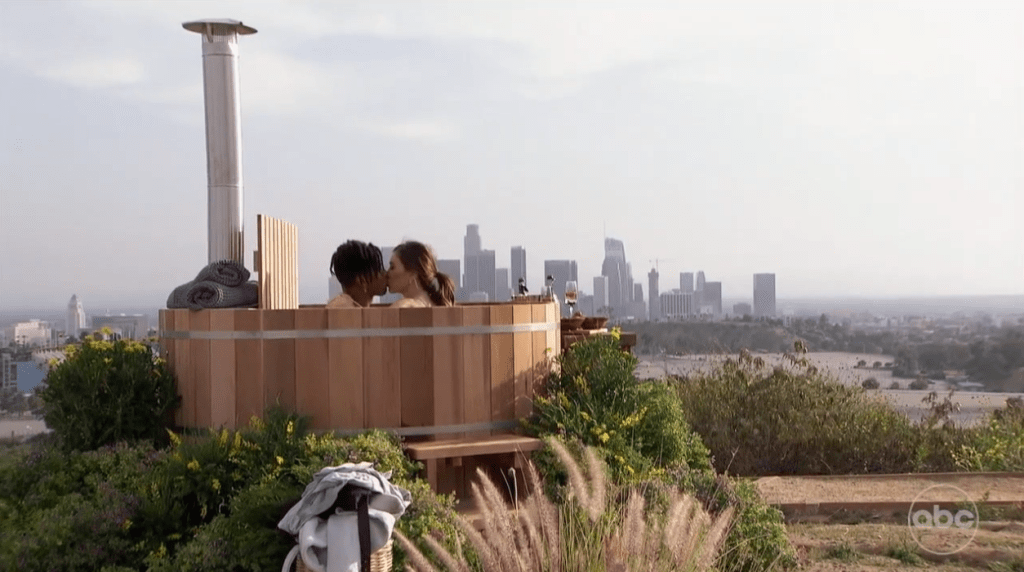 It could have been any location or any activity because Nate and Gabby have chemistry.

Really good chemistry. Like, I almost didn’t need to look away when their tongues showed during their kisses.

Their connection went deeper than physical chemistry though.

At dinner that night, Nate told Gabby about his six-year-old daughter who he spoke about with such love in his voice. You can tell that he loves being a dad and that sharing about her with Gabby was him at his most vulnerable. 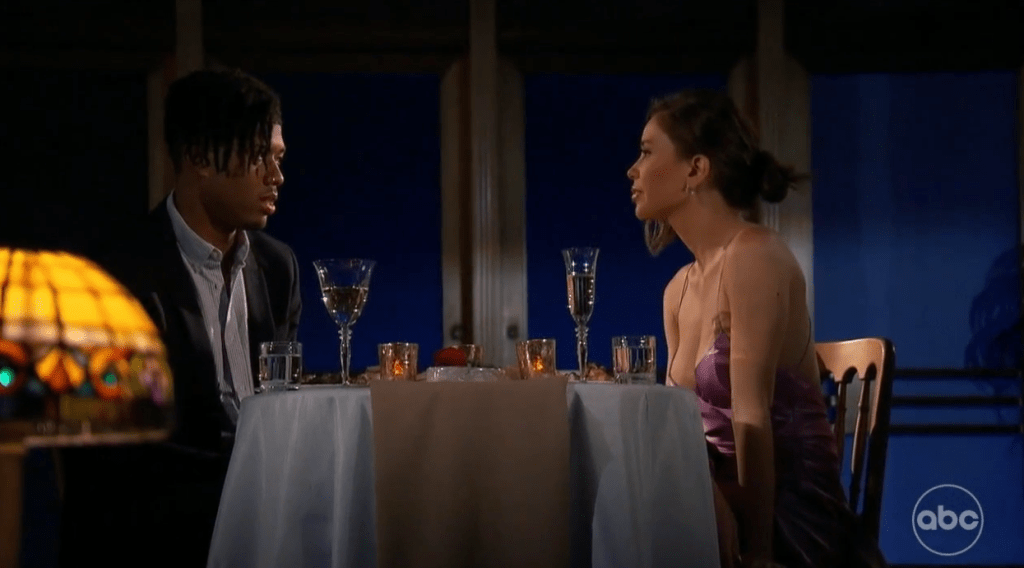 Gabby reciprocated by saying that her dad is amazing like Nate is and that it’s the greatest gift you can give to a little girl who didn’t always feel loved by her mom.

Gabby doesn’t know if she’s ready to be a mom, but she knows she feels good about Nate.

He got the date rose, and I am firmly adding myself to the Nate Fanclub. 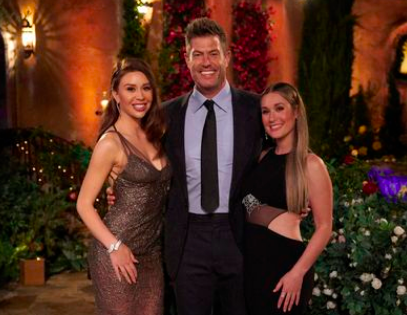 Things were finally looking up for Rachel at the cocktail party. She and Gabby were both having fun conversations, flirting, and getting kissed by any man they put their eyes on.

Okay, so, earlier in the week, Chris rubbed some of the men wrong when he told them that if he made it to fantasy suites he wouldn’t want his “female” to have slept with anyone else.

Second, why is he already talking about fantasy suites?

Someone call the here for the wrong reasons police!

By the time the rose ceremony came around, a handful of men had decided that Gabby and Rachel needed to be told what Chris said. So they told Rachel who then told a hilariously expressive Gabby what she had heard. 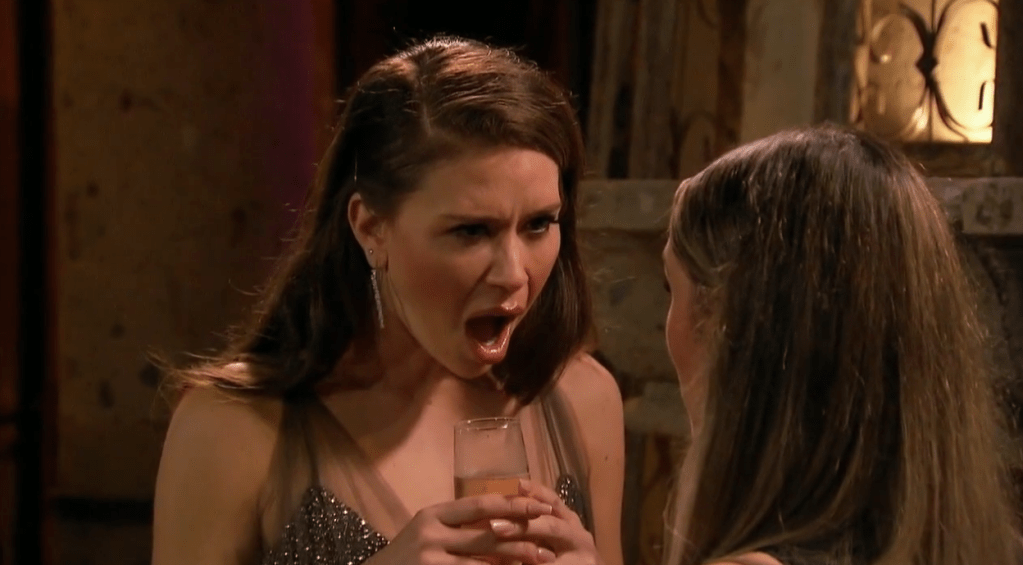 Gabby and Rachel confronted Chris, asking him if he felt it was appropriate to be talking about fantasy suites so early.

So they sent him home. 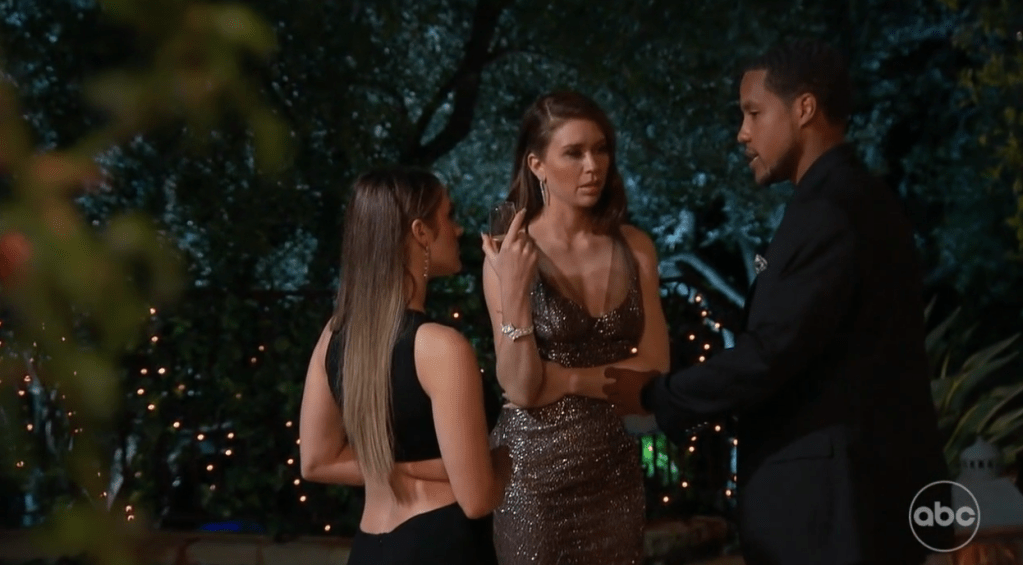 Then he came back to fight with the guys about it.

Then they sent him home again.

They’re already more decisive than Clayton Echard ever was on his season. 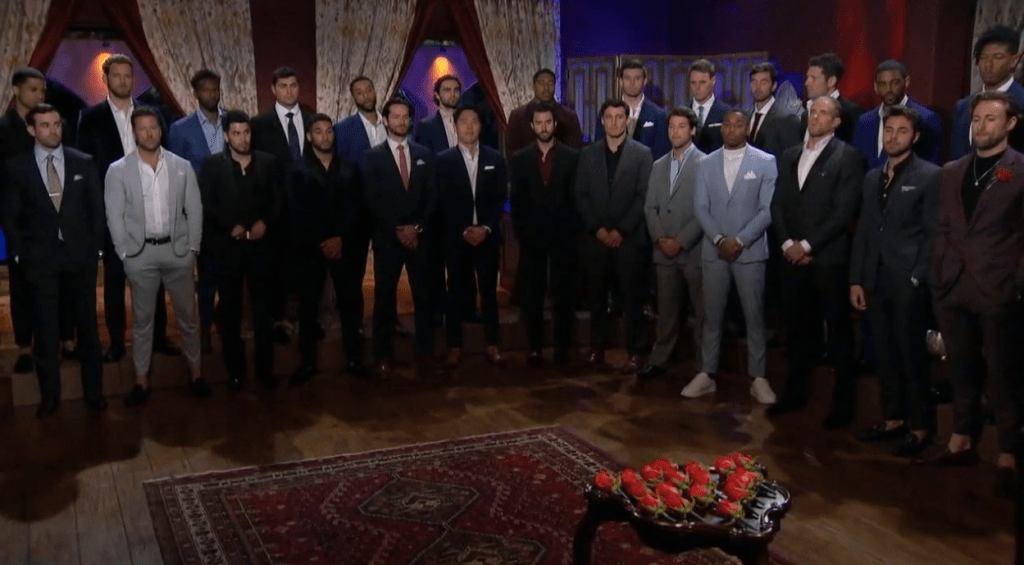 We finally made it to the rose ceremony where Jesse Palmer explained that Rachel and Gabby had decided to hand out roses from both of them that night. They would take turns saying names but receiving a rose from one of them meant the men could keep dating both of them.

I hate it here.

By the end of the ceremony, 21 men had roses in their hands which left 6 men to go home and scroll through their open DMs looking for an invitation to go to Paradise.

I could try to look-up all of their names for you, but we both have better things to do.

That’s week two of The Bachelorette in the books and as far as I’m concerned Nate and Gabby need to be the end game. Do you think the drama will ever not include the women’s deepest insecurities? I wouldn’t bet on it.

The Cool Table Has a Podcast Now!@thecool_table
1.0K Following 996 Followers
RT @BlessAmysHeart: Outlander fans know. That’s where Jocasta kept the French gold.
5 hours ago
1
Things Keep Getting Worse for Rachel and Gabby on #TheBachelorette https://t.co/o0rYpGvgci
6 days ago
1 2
@jamiesrule @aliciafromashes @BeaDeeH Camera make up up from telephoto lens /= what it will look like on screen. I… https://t.co/MLwcmdpHht
1 week ago
3
@jamiesrule The fact that I didn’t know WHICH show you were talking about at first …
1 week ago
2
RT @BlessAmysHeart: I want her to laugh, love, and ditch the brown shoes. https://t.co/NmvXNDcVZ9
2 weeks ago
1
Archives
Entertainment, The Bachelor, TV