When I was 8 years old, a rogue Rehobeth Beach wave pulled me under and flipped me around like a bobble head in a paint shaker. As I whirled ass over teakettle, horrified that something I loved  could turn so disorienting and deadly, I thought to myself: “Remember this feeling. It will be what the politics does to you in the 21st century.”

What a fucking time to be alive – amirite? Facebook! Quid pro Quo! QAnon! Compassion is selfish! Corruption is Godly! Dictators are noble! Allies are parasites! It all has me – and about half the country – careening about in the swirling tides of this toilet bowl flush known as the decline of the Republic, utterly unable to find purchase and break the surface.

This election has turned everyone in the Democratic party into full-fledged statisticians/ behavioral scientists/ pundits/ diner patron enthusiasts as we each formulate the precise calculus that leads to a winning nominee:

“Let’s see here, just take the cube root of the third debate tie color plus the frequency of folksy anecdotes divided by perceived vocal fry, then subtract 3 Pi times the ratio of implicit bias to preferred condiment (don’t forget to carry the 2!), and raise it all to the power of the average swing state barometric pressure in November and BOOM!!! We’ve found the 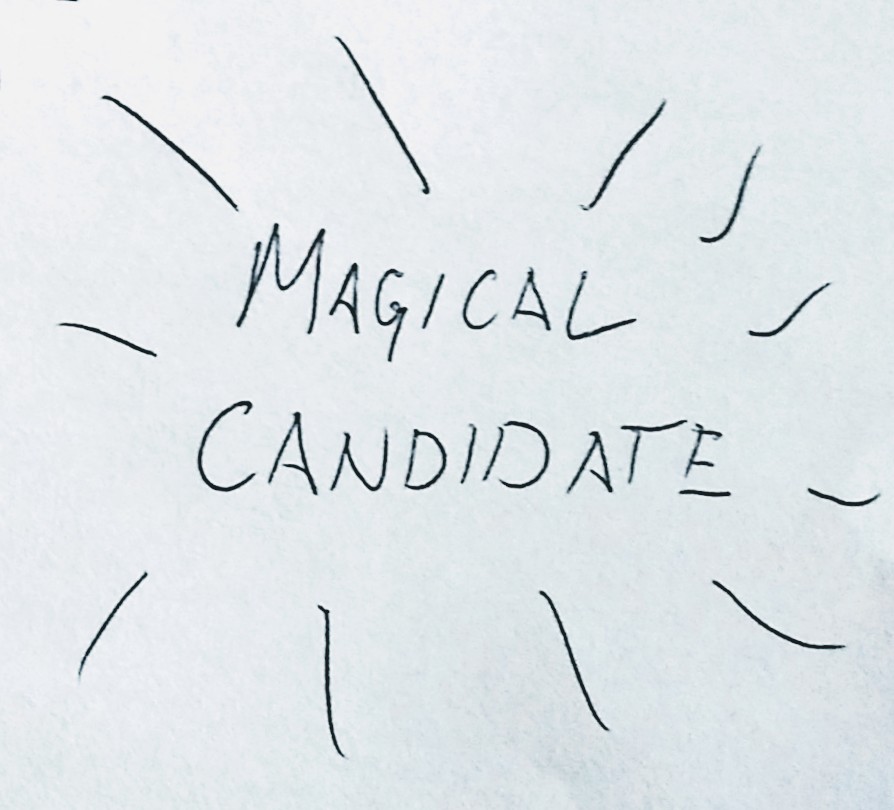 My message to you here, my dear voters, is this:

You, a mere mortal with internet access, a worn copy of “The Righteous Mind,” and the Excel decision tree plug-in, cannot possibly comprehend the sheer magnitude of variables that defines the vicissitudes of American electability. You can’t know the extent of someone else’s homophobia, or gauge their economic literacy, or divine what sparks their imagination or saps their enthusiasm. It is fucking impossible task, and a perpetual status-quo producing trap. You can only know you.

Now for the good news:

While every candidate has the chance of complete annihilation under the coming king tide of deceitful, bad-faith, vicious shit-raking the likes of which never before witnessed in the history of mankind, every candidate also has a great chance of winning!

You don’t know what the next (500-year-long) 9 months has in store. An economic crisis could bolster the message of one set of candidates, while a foreign policy incident could elevate the brand of another. A scandal could rock one campaign, while a viral narrative rockets another in the stratosphere. Just as you can’t know anyone else’s mind, you also cannot know the future!

Barak Obama was not some magical candidate uniquely above slander, set up for a smooth ride into the White House while totally not being accused of secretly being Taliban (FACT: I just peed myself a little laughing). He was a Black man from a northern city with ties to “scary” anarchic figures. HIS MIDDLE NAME IS HUSSEIN FFS.

It’s like he was literally dreamt up by laboratory technicians in rabid pursuit of formulating “most likely to be shellacked by a straight-shooting war hero in the white suburbs of Schenectady.”

Don’t take my word for it, let’s hear from recent Medal of Freedom recipient Rush Limbaugh circa May 2008:

Nobody thought Obama could be competitive in the general . . . nobody except the folks who believed in him enough to vote for him in the primaries.

He didn’t win because he was a unicorn candidate, he won because he had a compelling message of hope for a populous struggling to get their feet under them in the face of a grueling recession undertow. And, more importantly, because his ground game was kick ass. Just like the 2018 Midterm sweeps, the secret ingredient to making the impossible possible was thousands of individual “yous” bringing his message door-to-door, person-to-person.

On March 3rd, for the first time ever, Californians have a chance to have a real voice in who we send to the general election (along with the other Super Tuesday voters in Alabama, Arkansas, Colorado, Maine, Massachusetts, Minnesota, North Carolina, Oklahoma, Tennessee, Texas, Utah, Vermont, and Virginia). I’ll be damned if I let some mythical suburban voter rob me of my chance to support the person I believe has an electrifying vision for this country and the chops to fight for it.

That person may or may not be the nominee, but I will roll up my sleeves and get out the vote for whoever it is (even this fucking nightmare).

What are you planning to do to make sure the Democratic candidate wins in November? THAT is the only electability question that matters.

*Okay, fine: you are a precious, wondrous snowflake and no one can replicate the unique light you shine on our dim lives and so on and etc – happy?

Our Guest Contributor for this post is Katy. Katy had to vote for Michael Dukakis in her first election so she does not want to hear your whining.

The Cool Table@thecool_table
1.0K Following 1.0K Followers
Yesssssss https://t.co/rGaJC4TAJ4
22 mins ago
1
Latto Brought Big (Villain) Energy to #TheBachelor for episode two of Zach's season. https://t.co/qyqmqEZIpH
10 hours ago
1 4
@pagemelt I know nothing about them but it's a good assumption since the album is titled Dear Wormwood. I have so m… https://t.co/rXXSQbWwlG
11 hours ago
2
@pagemelt isnt the whole album based on the screwtape letters? RED FLAGs
12 hours ago
1
@MrsKowski unfortunately yes
12 hours ago
Archives
Entertainment, Movies

Feed Me, Chris: Chris Evans to Star in Little Shop of Horrors

Cardi B’s Interview with Joe Biden is Everything

I Only Have Time for Hope Right Now